It has long been predicted in Construct Ireland that a housing market slowdown would accelerate the growth of sustainable building, on the basis that increasingly energy and climate change conscious buyers would finally be in a position to demand more value for money. With oil prices nearing record highs, forward thinking developers who’ve taken the initiative to incorporate green aspects into their projects are showing a buoyancy that starkly contradicts the downturn, as John Hearne reveals.


It’s a worrying time for the construction industry. Davy Stockbrokers is predicting that the number of houses built could decline by up to 30% year on year in the last quarter of 2007. Next year doesn’t look so hot either. The brokers expect 65,000 house completions in 2008, a 20% decline on the 80,000 houses to be delivered this year.

Ulster Bank meanwhile reported recently that employment in construction in May fell for the first time since August 2003, with housing registering particular weakness. Broadening the focus to take in the general economy, and once again Davy are pessimistic. They reckon the overall level of GDP growth will halve from 6% to 3% in the second half of the year. Against this backdrop, successive interest rate hikes and uncertainty over stamp duty have combined to take all the gloss off the property market.

Curiously however, there’s no evidence of this contraction in the energy efficient sector. Developer Seamus Kenny is most of the way through the second stage of a 90 house development in Coolaney, Co. Sligo. “I’m not sorry for going the energy efficient way.” He says. “Sales are going very well, and a lot of my sales are word of mouth.” Each of the houses in his development combines a high grade insulation spec with an energy efficient oil boiler and heat recovery ventilation. The entire first phase is sold out and twelve of the twenty houses in the second phase are also off the books. Believing now that renewable energy technologies have moved into the mainstream, he plans to improve the sustainable spec still further in his next development.

In Moate meanwhile, developer Ronan Meeley is putting the finishing touches to his sixty-seven unit development in the town. Despite the fact that he’s incorporating renewable energy based district heating – something most home-buyers would be unfamiliar with – he’s experienced no negativity from the thirty owners already signed up. “I have to say that a lot of the people buying now are very, very up-to-date on new technologies. They’re not surprised at solar panels, they’ve been around a bit and a good few of the people that are buying in Moate have been over to look at an energy efficient development [which also incorporated solar panels] I did in Ballymahon, so they know what I’m at.” He notes too that since completing the Ballymahon project last year and embarking on the Moate one this year, the house-buying public’s attitude to energy efficiency has leaped forward. “Most definitely. It’s so cool now to be green, it’s unreal.” 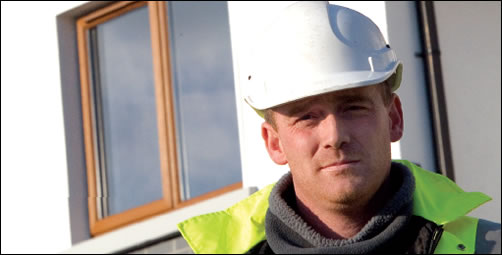 Ronan Meeley of Bespoke Construction, standing in front of his eco home development in Ballymahon. Meeley has continued to innovate by opting for biomass district heating for his current development in Moate 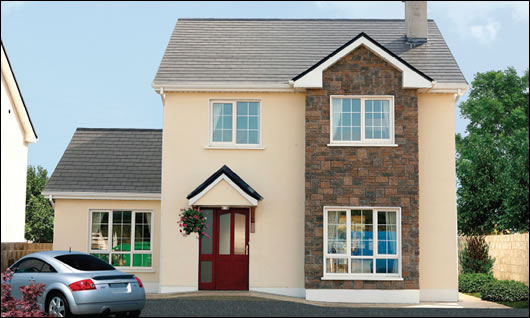 In spite of a general slowdown in the area, sales have been going well for Developer Seamus Kenny on the 1st phase of his 90 unit House of Tomorrow funded development in Coolaney


It’s not all ideological of course. While environmental awareness and worries over security of supply will motivate a section of the trade, bottom line issues will always be the prime motivator. With demand weakening, developers are going the energy efficient route because that’s what the people want, says Ivan Sproule of Sustainable Energy Ireland (SEI). “We have a lot of developers interested in using the House Of Tomorrow branding and we are now finding that many developers are using the “low energy” language in their promotional material. This was evident in a recent trip to Ennis where two developments not supported by SEI were being promoted as low energy close to an SEI supported development”.

Maurice Falvey of renewable energy company Energy Master in Kerry has identified the same trend: “The slowdown in the construction industry has had a reverse effect on the renewable side. People are not queuing up outside estates with blank cheques anymore. What we’re actually finding is developers are looking at ways to market their houses in such a way as to give themselves a competitive edge and renewable energy is a source of that.” As the slowdown shifts some of the economic power from seller back to buyer, home-buyers are beginning to look around for additional value. Falvey identifies the introduction of the building energy rating (BER) as central in focusing minds on energy issues. “We’re getting more information on the fabric insulation of the houses than ever before.” says Falvey. “Before we would have asked questions and been told yeah, it’s well insulated but you’d never get a definitive answer. Now we’re getting all the detail we need…We’ve been to meetings with developers where 60% of the time is dedicated to building design, insulation, heat loss and so forth. Generally in the past, that would have been a one minute conversation.” According to Falvey, a large part of the reason for this is because of the marketing benefits of getting a higher energy rating. “It’s like buying a washing machine. If there’s a board up outside saying the houses are A2 or A3, people are just going to be drawn to it. They certainly will pay that extra money for it, and that’s where developers have picked up on the fact that they have a selling feature.”

Joe O’Carroll of Imperative Energy says that what started out as an exercise in meeting new local authority requirements of the type brought in by Fingal, Dun Laoghaire-Rathdown and Wicklow, has become a marketing imperative. “To be fair to the local authorities, they have shown some leadership in this area by forcing developers to come up with more energy efficient houses that [bypass] the building regulations and also incorporate a certain element of renewable energy…There was some resistance when it was first announced with Dun Laoghaire-Rathdown but by and large developers have just adapted.” Meanwhile, the slowdown not alone reduces the number of houses being built, it also changes the types of houses that are being built. “Down in Waterford where there aren’t the same targets from the local authority, I was talking to one developer and his rationale for incorporating renewable energy into the house was purely from a marketing point of view. There is a definite downturn in the market and developers are going to have to come up with something unique to sell houses. It’s not just a matter of just throwing up any old house that they’ll sell off the plans…We’re past the tipping point in terms of renewable energy and it’s increasingly becoming the heating system of first choice as opposed to people begrudgingly doing it.” 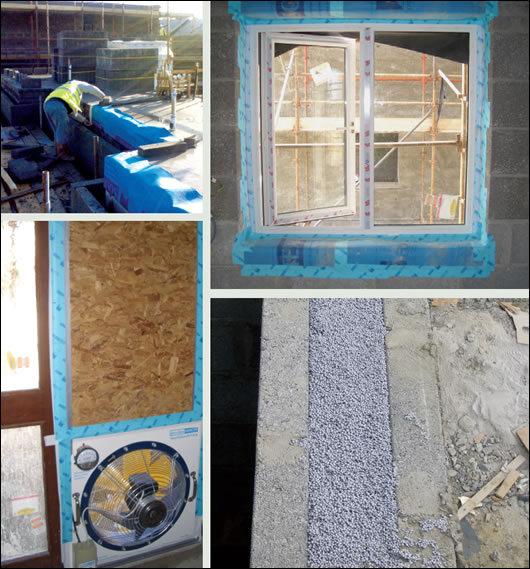 (Clockwise from above) Attention to thermal performance is evident throughout Magner Development's Mallow homes. An airtightness test being conducted; a first floor joist being made airtight; a window sealed to high levels of airtightness; a cavity wall fully filled with bonded bead insulation


General buoyancy in the sustainable sector is borne out by the demand for renewable technologies. SEI has recently approved application number 14,200 under its Greener Homes Scheme and over 6,000 units covering various technologies in the House of Tomorrow programme. Sustainable technology companies tell the same story. “Our solar sales on last year are 40% up.” says Alan Hogan of Precision Heating. “We have seen a growing trend in condensing gas and oil boilers and a downward trend in standard efficiency boilers.” Getting the attention of building professionals isn’t the uphill battle it used to be either. “A year and a half ago, we were knocking on doors trying to get architects and engineers to talk to us about solar, to beg for time to talk to us. It’s quite the opposite now. We’re finding it difficult to keep up with appointments.” He notes that commercial and public projects in particular have been driving the market on in the past twelve months. “It’s a very exciting industry at the moment for us, and for most companies like us. We feel the time has come for renewable energy to be considered as a normal product; no longer are they special products, no longer are they black magic. I’ve been involved in renewable energy since 2000 and I’ve seen seven years of trend change… It was a real struggle, it was really difficult trying to get the message across and get the sale made, but it’s happening.”

It’s still early days however. Ed O’Donoghue of Magner Developments in Cork reports that while interest in the energy efficient units in their mixed development has been strong, awareness of these issues isn’t as high as everyone else suggests. He finds that when it comes to sustainable building technologies and prospective buyers, he has   =  to do a great deal of explaining: “Oh Jesus stop. And the thing is you’ve to put it down to terms they can relate to, so you’ve got to dumb it down a bit.” he says. He points out however that this process is inevitable as we move from early-adoption towards a more mainstream scenario. “There was no such thing as large scale residential, energy efficient houses twelve months ago. They were more connected with premium or innovative developments in unusual locations built by unusual groups with certain noble aims…Here we are, a punch and crunch property developer. We build an average starter home for your average first time buyer. It’s a new product that they haven’t really been able to think about before, so there’s nothing to compare it to.” Moreover, most of these units are targeted at first time buyers, who often miss the energy-efficient story in the legal and banking ordeal that is buying a house. “The biggest problem is that people’s understanding and awareness of the issues has been quite poor. Now, I think it’s increasing…A detached house buyer for example tends to be a trader upper. They tend to understand the cost of running a house better. Once you’ve got that understanding, the whole green thing makes perfect sense.”