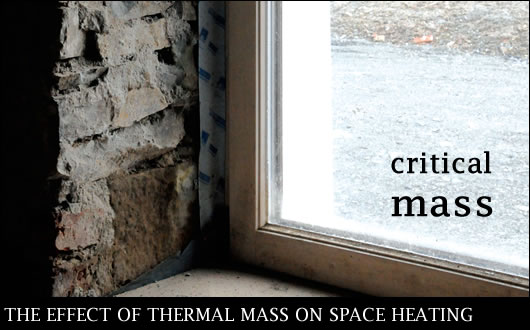 Thermal mass can significantly influence a building’s space heating requirement – in some cases the effect is to increase it, and in others to reduce it. Leading energy consultant Ciaran King of Emerald Energy explains how this occurs, and by describing an assessment of the topic, provides some rules of thumb regarding when thermal mass may be beneficial, and when it may be detrimental.

These two effects are pulling in opposite directions, and the question of whether increased heat capacity in a dwelling is beneficial or detrimental depends on which is the more important in the particular circumstances. Factors affecting their relative importance include the building’s insulation level, the amount of heat gains and the occupancy patterns.

The first effect above is fairly clear, but the mechanism of the second merits further explanation. When a building receives internal or solar heat gains outside of heating periods, its internal temperature will rise above what it would otherwise have been, increasing the rate of heat loss. Likewise with gains received during heating periods, provided they are sufficient to raise the temperature above its set-point. In a light-weight building of low heat capacity, the temperature rise will tend to be greater than in a heavy-weight building, and this will drive increased heat loss. Therefore, in the heavy-weight building, the heat gains will tend to remain within the building for longer, where they can make a greater contribution to subsequent heating requirements.

The effects of thermal mass on a building’s space heating requirement are complex, and may depend on factors such as the location of the thermal mass, its exposure to sunlight, and interactions with a slow-response or poorly-controlled heating system. So the assessments described below shouldn’t be regarded as comprehensive.

Base case building
The building used as the base case for the analysis was a typical two-storey semi-detached house just complying with the current building regulations. The internal temperatures, heating schedule, and internal gains assumed were as given by SEI’s DEAP software. Three categories of thermal mass – corresponding to the DEAP thermal mass categories of the same names – were considered as follows:

The constructions used were typical of those in common use, and are described in table one. Note that the lightweight external wall in this table could be either a masonry wall with internal insulation or a timber-frame wall. In the analysis, an allowance was also made for the thermal mass of dwelling contents.

Table 1: Constructions used in the analysis

In each case, the annual space heating requirement was calculated using the Energy Plus dynamic simulation program, using hourly weather data for Dublin Airport representing a typical meteorological year. As the heating system is not being assessed here, an ideal heating system was specified, having 100 per cent efficiency, perfect control and large capacity.

The results are illustrated in figure one. To facilitate comparison of results in this and subsequent charts, the annual space heating requirements are normalised by dividing each of them by the result for ‘Medium’. They show that there is little to choose between ‘Low’ and ‘Medium’ thermal mass, but ‘High’ thermal mass requires over 3 per cent more space heat annually than either of the other two categories.

Effect of gains
As mentioned above, thermal mass can make better use of solar and internal gains. To illustrate this, the solar gains were increased by locating two-thirds of the glazing on the south façade and the remainder on the north façade, without changing the total glazed area. (In the base-case building, all glazing faced east/west). Internal gains were left unchanged.

Effect of occupancy
To assess the effect of intermittent occupancy and heating hours on the space heating requirement, the following three heating schedules were assessed.

During all heating periods the set-point temperature was the same (18.75C); no night set-back was applied in the case of continuous occupancy. In this assessment, the level of daily internal gains was the same in all cases in order to isolate the effect of heating hours; in reality, internal gains would tend to be affected by occupancy.

A further point regarding thermal mass is that, if an occupant occasionally leaves windows open for a prolonged period in cold weather, for whatever reason, the heat stored in the building’s thermal mass will become depleted, and must be replenished during the next heating period. This is more of a loss in buildings of high thermal capacity, due to the greater amount of heat stored.

Quantifying thermal mass
In physics, the heat capacity of an object is considered to be the amount of heat required to raise its temperature by one degree; this heat is then stored in the object. However, in buildings with thermal mass, the internal temperature varies, and the speed of this variation is often too fast for the thermally massive elements to reach thermal equilibrium. So the thermal mass of a building element may be more accurately quantified as a dynamic heat capacity – based on varying temperatures.

The dynamic internal heat capacity of a building element such as a wall or floor may be viewed as the difference between the maximum and minimum amounts of heat stored in it, when subjected to a  sinusoidal (sine-wave) temperature variation on the inside, with the outside temperature being kept constant. Its units are joules per kelvin (J/K), or if expressed per unit area of the element, J/m2K. For elements of significant thermal mass, the value depends on the period – the time for a full cycle – of the temperature variation. A time period commonly used is one day – this relates to the variation of daily solar gains. When considering the response of the building to heating system outputs, a shorter time period may be appropriate.

The procedure for calculating this heat capacity is described in the international standard EN ISO 13786; examples for common wall constructions are given in table two.

In a building with a heating cycle of one day during normal usage, but with occasional longer unoccupied periods, for example dwellings in which the occupants go away for long weekends, the material near the surface can be effective at storing heat during normal usage, but the deeper material may contribute to increased heat loss during the longer unoccupied periods. In such cases, to the extent that thermal mass is beneficial, it may be better to provide it in shallow layers at the surface rather than in deep layers.

Thermal mass in a low-energy house
The influence of insulation level, gains and occupancy were considered in isolation above, to illustrate their effects. Now we put these together in assessing the effect of thermal mass on the annual space heating requirement of a low-energy house.

The low-energy house considered had insulation and air-tightness levels meeting the so-called Passive House standard. It had an efficient whole-house mechanical ventilation system with heat recovery. Its average internal gains were 75 per cent of DEAP levels, as energy-efficient appliances were assumed. All glazing is east/west facing. The occupancy hours are similar to those used in DEAP, except with the occupants away for two consecutive days once every two months.

The analysis was then repeated for a passive solar house, in which the glazing orientation was changed to north-south, with two-thirds on the south façade, and no increase in total glazed area.

The results are shown in figure five. In this chart, the absolute (as opposed to normalised) annual space heat requirement is shown on the vertical axis. For the house with east/west facing glazing, the ‘Low’ and ‘Medium’ thermal mass categories are equally good, but ‘High’ performs more poorly. For the passive solar house, ‘Medium’ and ‘High’ are equally good, with ‘Low’ performing more poorly. These trends are as expected – thermal mass is more beneficial in the passive solar house because it makes better use of the higher solar gains.

Embodied energy
The energy used in the production of building materials is commonly referred to as embodied energy. This term is a bit misleading, as it suggests that the energy of production is somehow embodied in the material, for example as chemical energy, but this is not usually the case. However, the term is retained here as it is what people are familiar with.

The value of embodied energy for a building material will vary from production facility to production facility, but a general value for concrete, obtained from the SERT team at the University of Bath, UK, is 0.95 MJ/kg. This is a “cradle-to-gate” value, that is, it includes the total primary energy used in the extraction and production processes up to the point where the material leaves the factory gate; transport from factory to building site would be additional.

For the typical semi-detached house considered above, changing from the ‘Low’ to the ‘Medium’ thermal mass category involves the provision of a concrete floor slab and half of a concrete party wall (the other half belongs to the adjacent house). Using the above embodied energy factor for concrete, the embodied energies of these added up to 26 GJ.

In the low-energy passive solar house assessed in the previous section, moving from the ‘Low’ to ‘Medium’ thermal mass category saved 0.26 GJ/yr of energy. Thus if the additional thermal mass were provided solely to reduce the space heating requirement, it would take 100 years to pay back its embodied energy. If this is longer than the design life of the building, the saving would be negative in a life-cycle analysis.

For the buildings and occupancy patterns assessed above, the best performance was mostly achieved with the ‘Low’ or ‘Medium’ thermal mass categories. ‘High’ thermal mass gave the lowest annual space heating requirement only in the case of continuous occupancy, and jointly with ‘Medium’ in the case of the low-energy passive solar house.

In cases where thermal mass is beneficial, it is normally best provided in relatively shallow layers at the internal surfaces, rather than as deep layers.

The embodied energy of materials providing internal heat capacity can be significant, and will offset or in some cases negate any saving in space heating energy if such materials are included solely for this purpose.