Tall buildings tend to be among the worst offenders in terms of energy and environmental profligacy – but one new Viennese project shows that high rise doesn’t have to mean high environmental impact.

In a world first, the RHW.2 office tower in Vienna has achieved the passive house standard. The certificate was presented by Susanne Theumer of the Passive House Institute on the 20th floor of the building with a prime view of the old city. Perched on the bank of the Donaukanal - or Danube canal - the glazed facade of RHW.2 rises almost 80 metres high. The building - which boasts superior indoor air quality and minimal energy consumption - is home to 900 employees of the Austrian Raiffeisen-Holding Group.

"This building proves once again that the passive house standard and good architecture are perfectly compatible", said Prof. Wolfgang Feist, director of the Passive House Institute.

On Tuesday an international group of passive house experts – who had travelled to Vienna for a passive house summer academy – came to visit the high-rise building. According to the building’s project manager Wolfgang Pundy, the building is strictly in line with the Raiffeisen group's climate protection objectives. "This certification proves that the path we have chosen to take for our new office building is the right one," he said.

The building’s energy concept is compelling: energy is provided by a photovoltaic system as well as a combined heat, cooling and power plant. Even the waste heat from the data centre is re-used, with cooling partly coming from the Donaukanal. The decisive factor in achieving the passive house Standard was the radically increased efficiency of the facade, the building component connections, the mechanical systems – and even the coffee machine. In combination with optimised shading equipment, the heating and cooling demand was reduced by 80% compared to conventional high-rise buildings.

For quality assurance reasons, true passive houses are certified in accordance with the criteria set out by the Passive House Institute,which has been represented in Austria with its branch office in Innsbruck since 2010. 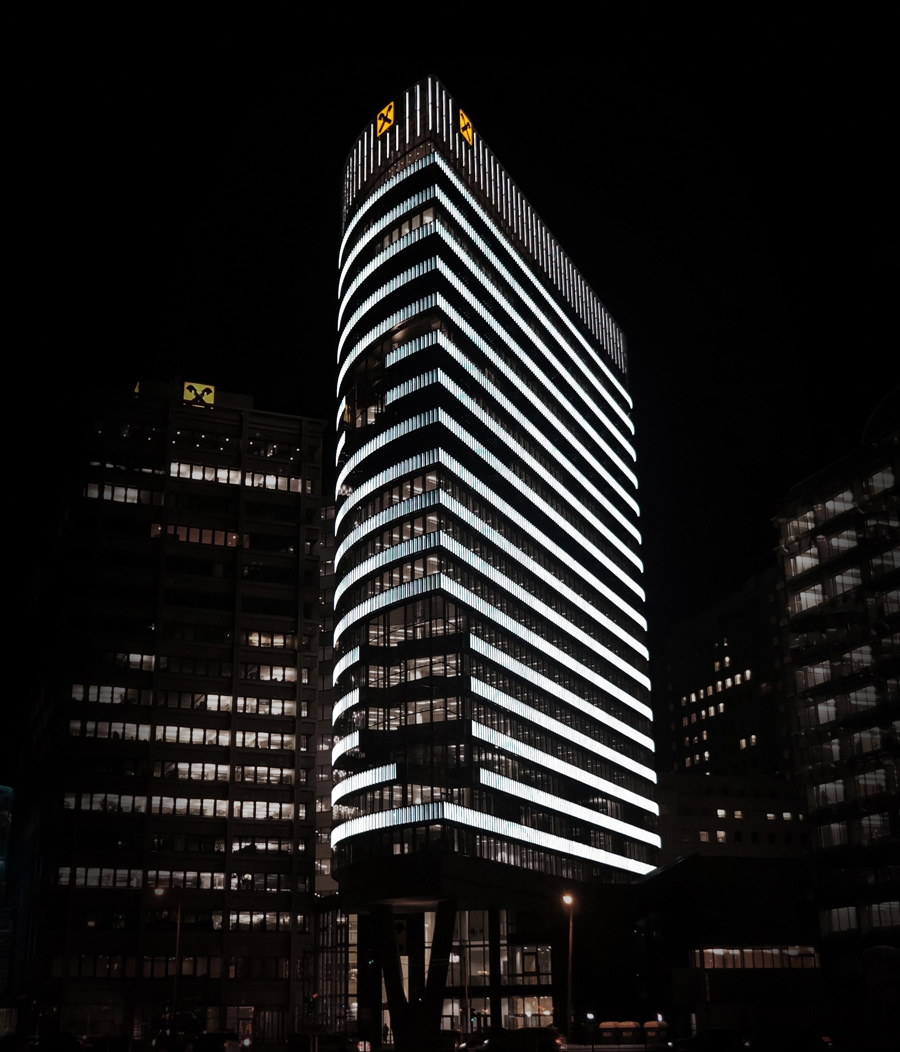 After the award ceremony in the RHW.2 tower, the international experts moved on to see other outstanding projects in the region. In Korneuburg, just north of Vienna, the group visited the new regional and district court – and its adjacent correctional facilities. The building complex built to the passive house standard demonstrates how smart planning can accommodate the high levels of energy efficiency and comfort required in such buildings.

According to the institute the Vienna region is setting the pace in passive house, not only with its beacon projects but also with the number of completed buildings. The Eurogate district, an area entirely consisting of passive house buildings, stands as a shining example, the institute said.

Upon completion of the first construction phase, 7,000 occupants in 800 apartments will be able to benefit from the advantages of this energy efficient construction method. The international guests also viewed one of five passive house student hostels, developed by the Viennese company OeAD-GmbH. A total of 15,000 students from all over the world have already had the opportunity to experience what modern and sustainable living means during their stays in Austria.

The excursion was part of a six-day summer academy, organised in Slovakia by the International Passive House Association (iPHA). The visit to Vienna followed an invitation by Austrian passive house expert Günter Lang of Lang consulting. The iPHA is a global network of passive house stakeholders including building owners, architects, scientists and component manufacturers, with membership open to all.