Taking its cues from the original historic almshouse on site, St John’s Lichfield chose to build their new sheltered housing development for older persons to the passive house standard as part of high-quality design that emphasised community, calm and comfort.

The decision by St John’s Lichfield, an English charitable trust that provides sheltered accommodation, to choose the passive house standard for a new sheltered residential scheme for older persons looks to be a solid continuation of an innovative, forward-thinking ethos that dates back several centuries.

The new development that adds to the historic St John’s Almshouse complex provides for 18 new apartments contained within three separate buildings, which are arranged around a new landscaped courtyard. They were designed to create a second quadrangle that mirrored the existing quadrangle, which contains the original grade-one listed almshouse that was built in the late 15th Century.

“We wanted the building to be efficient as residents are elderly and often with limited means, and because the original St John’s was innovative in its time, we wished to replicate this and build something modern that we could all be proud of,” says Katherine Duncan- Brown, chair of the St John’s Lichfield board of trustees.

The roots of the original St John’s Almshouse stretch back as far as 1129, when a priory was built outside the midlands city of Lichfield as a hostel for poor pilgrims who had come from many miles away to worship at the shrine of Chad, the first bishop of Lichfield. 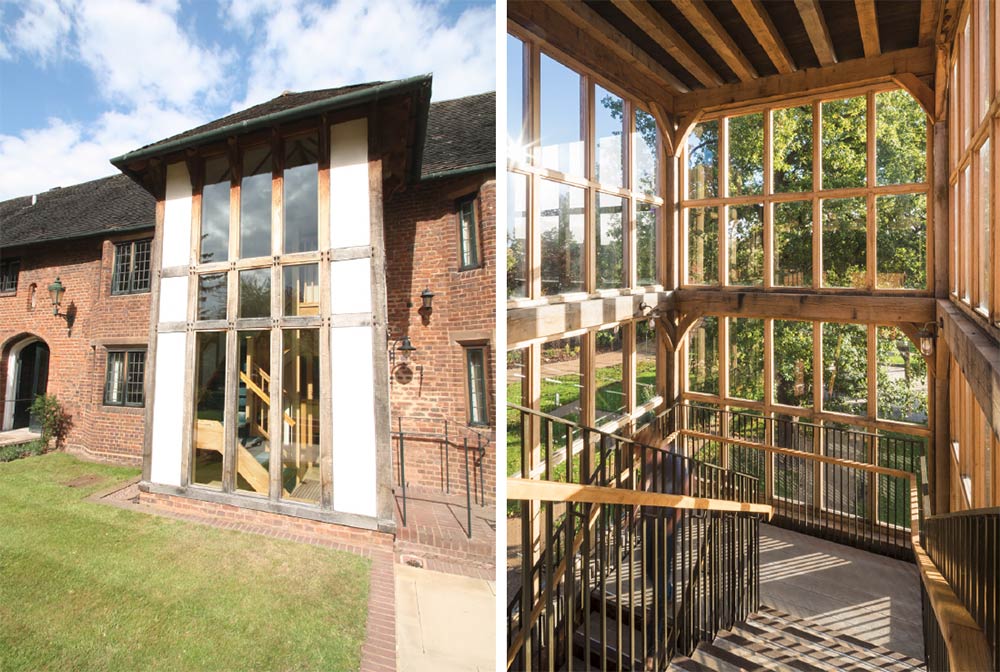 In 1495, Bishop William Smythe re-founded the priory as an almshouse for nine men “who through no fault of their own had fallen on hard times”. This entailed a rebuilding project that was considered ground-breaking in its day. The grade-one listed Tudor brick buildings are now nationally famous for their chimneys, which were among the first domestic chimneys in the Midlands.

Until the decision in 2013 to commission the new apartments, the existing complex provided 24 apartments for 31 residents, so the scheme represents a significant expansion both in accommodation and in the number of residents.

The trust commissioned Worchester-based KKE Architects, who specialise in healthcare design, to design the new complex. 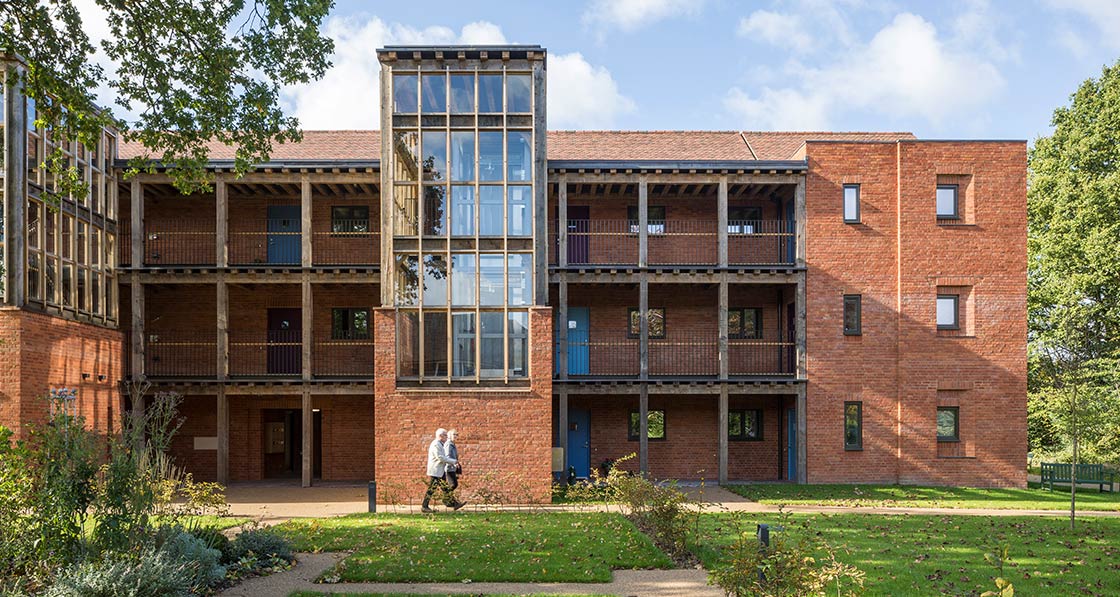 Because the original St John’s was innovative in its time, we wished to replicate this and build something modern that we could all be proud of.

KKE suggested the passive house approach to the trust at interview stage, and it clearly appealed on a number of levels, according to lead architect Lorin Arnold. This included the high-quality of materials and design, but also the prospect of comfort and low running costs for residents, who pay their own utility bills.

But besides passive house principles, the overall design was informed more by the existing context and the idea of creating a new communal courtyard and pavilion, says Arnold. “These are the heart of the scheme both formally and socially, with the accommodation in two perpendicular blocks enclosing two sides,” he says.

The circulation areas (access walkways, stairs and lift areas) form a semi-private space that also faces onto the courtyard, while the balconies and terraces face outwards towards the perimeter of the site. “This mix of private, semi-private and communal spaces helps to reinforce the sense of community which has been established at St John’s over centuries.” 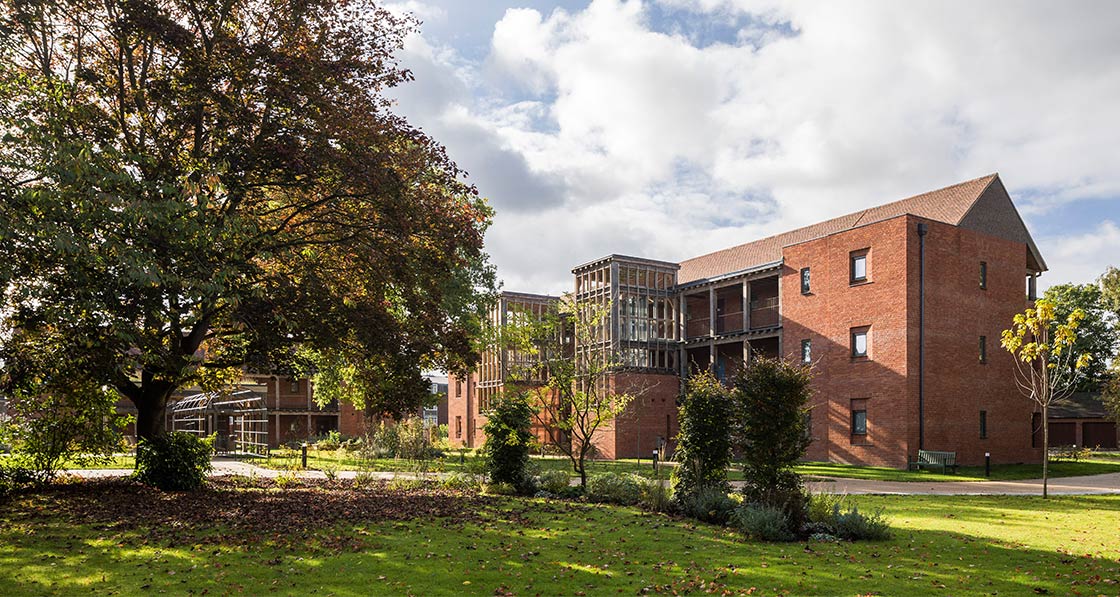 The new development also incorporates high quality materials designed to blend into their environment, including hand-made bricks, clay plain roof tiles, copper cladding and green oak framing, with design cues taken from the use of oak in the original buildings.

“The use of these high-quality materials not only contributed to an aesthetic suitable for a conservation area, but also coupled with the high levels of workmanship required by passive house, should ensure the durability and longevity of the buildings for future generations of residents,” says Duncan- Brown.

The new apartment blocks are of cavity wall construction with full-fill insulation to the cavities. There is one block of 14 one-bedroom apartments, and then two smaller blocks with two two-bed apartments each, but these are in fact connected by a roof structure and insulated walkway, so they effectively appear as one building. 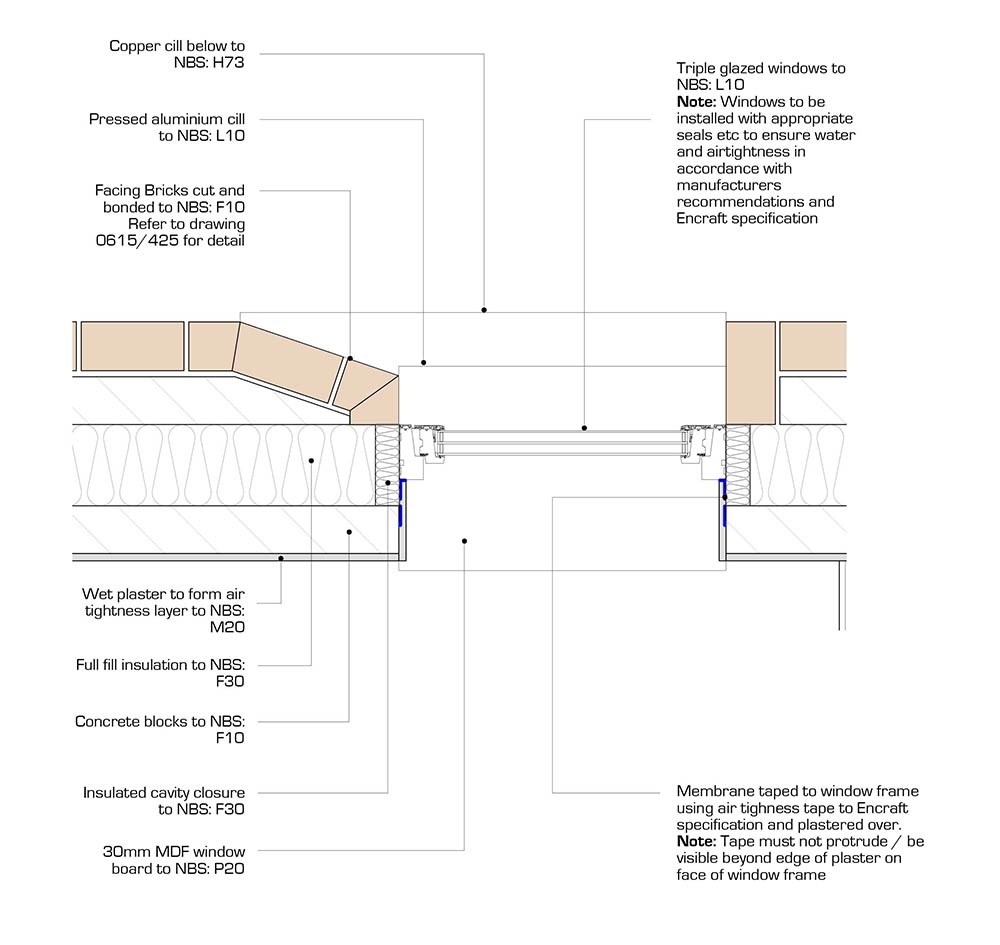 “Longevity and robustness were key factors with the existing buildings that date from 1495, so the client was keen to ensure the new buildings were built to last — traditional cavity wall construction made sense from this perspective, and with the use of brick elevations,” says Arnold.

The smaller blocks required more insulation to meet the passive house standard because of higher surface area to volume ratios, but there were also major headaches in achieving the necessary airtightness for the entire development, according to the project’s passive house designer, Dr Sarah Price of Design Buro. 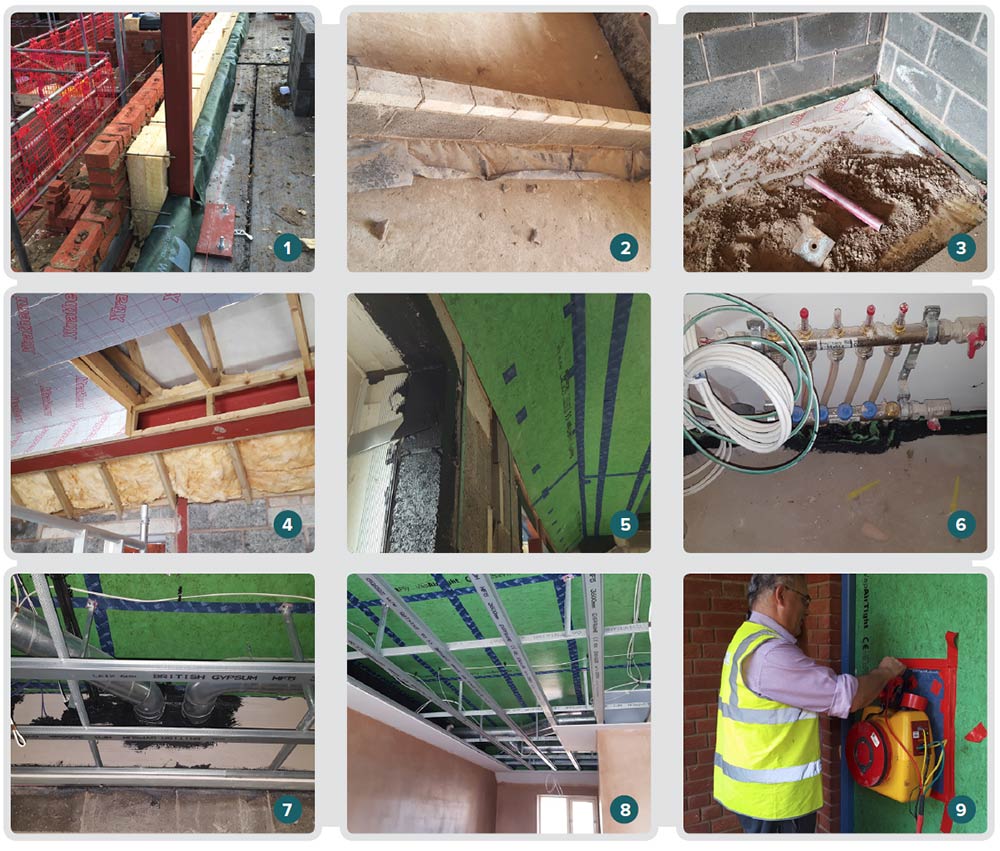 1 Wall build-up features brick outer leaf, followed inside by Isover mineral wool & Ancon TeploTie thermal wall ties in wall cavity, and Hemelite block internally; 2 thermal blocks in foundations where party wall causes a break in the insulation layer; 3 Xtratherm Thin-R insulation below and around edges of floor screed, and damp-proof membrane under this, which also serves as the airtightness layer here; 4 Xtratherm Thin-R insulation to underside of ceiling build-up, with Isover Spacesaver Plus above this to floor of attic above; 5, 6 & 7 Blowerproof liquid airtight paint and Medite Smartply ProPassiv (formerly VapAirTight) airtight OSB board formed key components in the airtight envelope, with Pro Clima tape; 8 taping of the ProPassiv board at underside of ceiling, with service cavity below this; 9 the blower door tests by Paul Jennings produced average results per dwelling of 0.48 and 0.56 air changes per hour at 50 Pascals for the large and small blocks respectively.

Initially, the idea was to have the primary airtightness envelope around the external walls of the three blocks. However, there were major failures when the smaller blocks were tested.

“The airtightness layer failed at internal floor junctions where the concrete slabs had been laid on the membrane,” says Price. There was also no airtightness coordinator employed by the original contractor, who went into administration during the build, and as a result many of the airtightness details were missed, according to Price.

Areas of the blockwork wall above the ceiling void were not rendered (the render intended to be the airtightness layer here), and airtightness membranes behind internal partition walls were omitted. 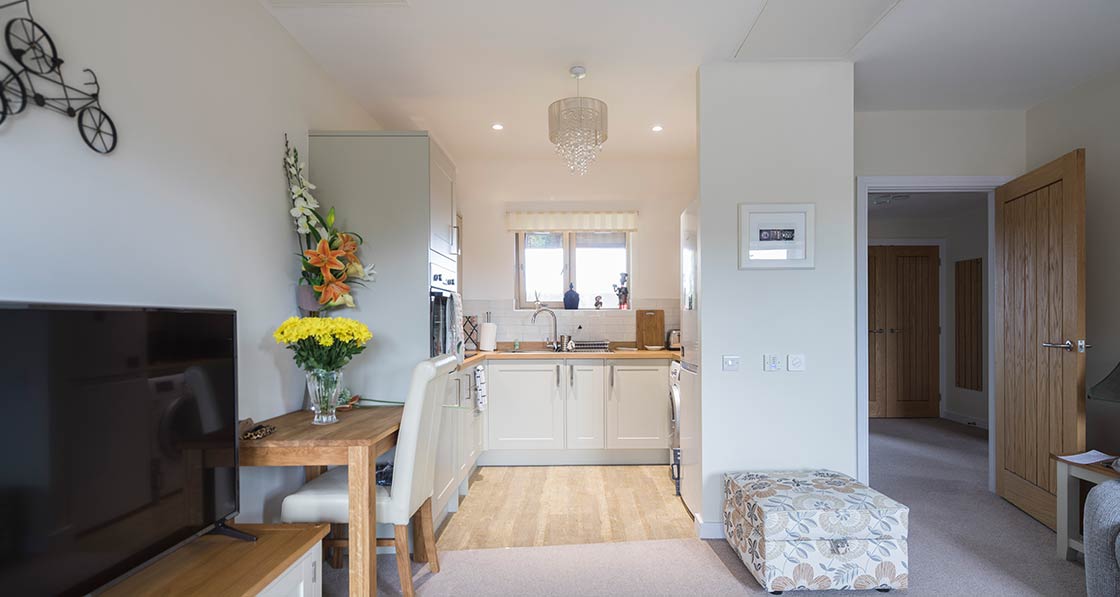 The airtightness strategy was changed so that each apartment was made individually airtight, bringing the airtight layer within the units. As such, all airtightness junctions became accessible again, with the primary airtightness layer formed by membranes behind internal walls and floors, internal plaster to the external walls, Smartply ProPassiv airtight board to top-level ceilings, and the pre-cast concrete slabs to intermediate ceilings.

But significant remedial work was also required, and specialist airtightness contractor ECO DC was brought in to make sure the apartments met the passive house standard of 0.6 air changes per hour. As well as new taping the team also made liberal use of Blowerproof liquid airtight paint.

“My main hope is that others will learn from this project and see the value in employing a dedicated airtightness coordinator,” Price says.

Another issue was the delays caused by the discovery of 48 medieval skeletons during excavations. 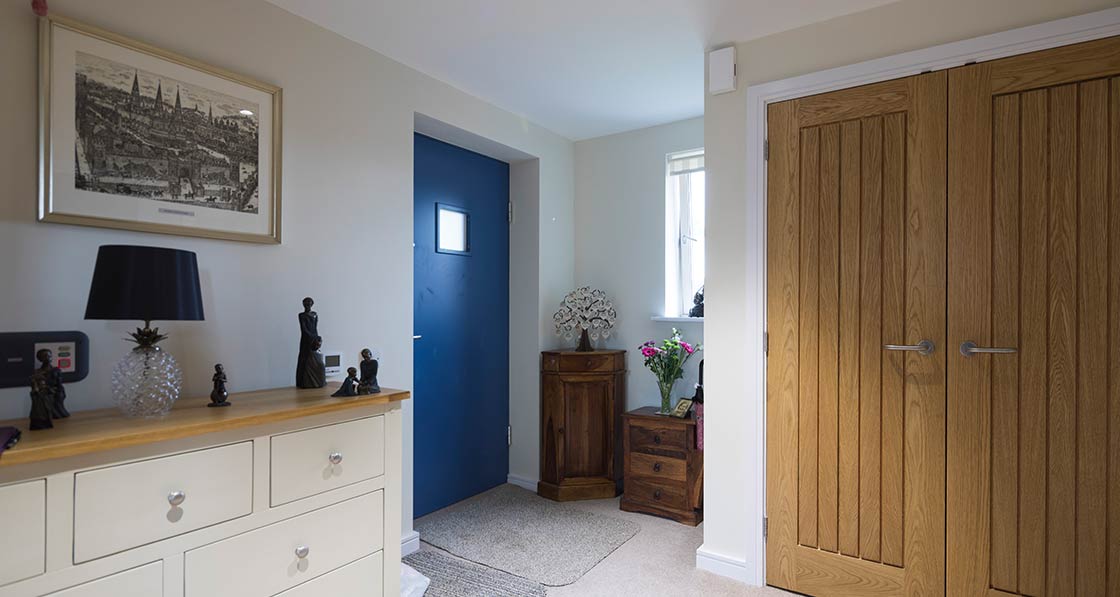 But there were major headaches in achieving the necessary airtightness for the entire development.

“In effect, the heat losses of the building are reduced so much that it hardly needs any heating at all. Energy bills will be minimal, thereby removing a significant worry for many older people on lower incomes,” says Duncan-Brown. She also states that the new almshouses are a great example of how older people’s lives can be fulfilled and enriched by their surroundings. Lorin Arnold, meanwhile, is mostly happy with how well proportions of the courtyard work and, along with the quality of the materials, the existing oak tree and the orientation of the buildings “helps create a really calm and restful environment for the residents,” he says.

“The covered walkways also act as more than just circulation spaces; they have a beautiful outlook over the courtyard, as well as providing incidental meeting points where people can socialise informally — this social aspect was key to the original design concept and it’s great to see the buildings in use now and hear positive feedback from the residents.”

Energy bills (measured or estimated): Estimated average of £19.61 per apartment per year for space heating only, based on average apt size, space heating demand figures above, gas price of 3.8p per kWh and taking boiler efficiency into account. Also estimated annual standing charge for gas of £90.41 per apartment, for total bill of £110.17. Calculations from uswitch.com. 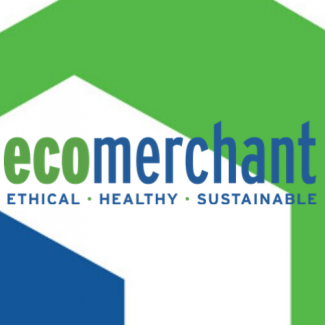 From foundation to ridge Ecomerchant supply natural and sustainable building materials across the whole of the UK direct from stock.

From foundation to ridge Ecomerchant supply natural and sustainable building materials across the whole of the UK direct from stock.