Radon is one of the most dangerous indoor air pollutants, yet there is little research on how it is affected by different forms of construction and ventilation. A new study, however, suggests that homes built to the passive house standard are significantly less at risk of radon build-up.

Across Ireland, around one in 12 homes exceeds the level of 200 Bq/m3 (becquerels per cubic metre of air) above which remedial action is recommended. In a survey of 77 certified passive homes in the Republic of Ireland, and 20 in the UK and Northern Ireland, none exceeded this level. 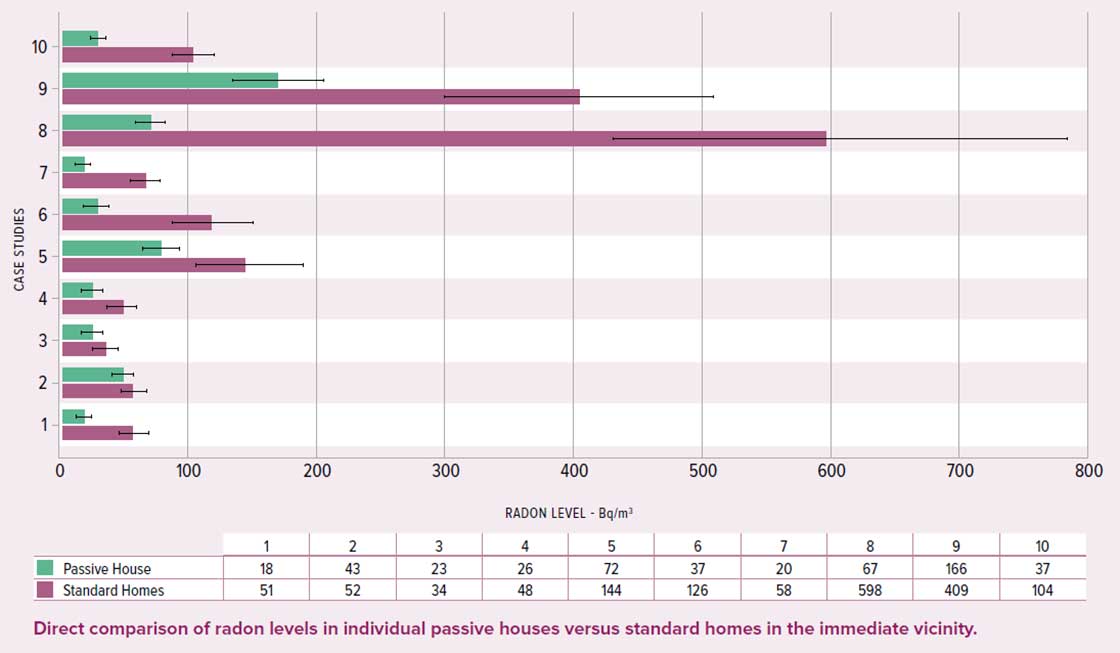 In Ireland and the UK, radon is the leading cause of lung cancer after smoking, and is recognised as an important indoor pollutant by both governments. It is a colourless, odourless and tasteless gas emitted from rocks and soil that can enter buildings through cracks and gaps, and accumulate to potentially dangerous levels.

In Ireland, it is estimated that radon exposure accounts for approximately 14% of all lung cancers – equating to around 300 cases per year. In the UK around 1,100 deaths from lung cancer each year are related to radon in the home.

Yet as Barry McCarron found, there is very little research anywhere looking at the impact of construction methods, as opposed to the impact of location, on building radon levels. The National Radon Control Strategy in Ireland notes that “the relationship, if any, between increased airtightness and elevated radon levels is unknown”. There has been speculation that airtight dwellings might be at risk of a build-up of radon.

Passive house ventilation is known to deliver excellent indoor air quality, on metrics such as relative humidity and carbon dioxide. But nonetheless Barry McCarron found that even some of his architecture school colleagues assumed that passive houses would be at higher risk from radon due to their airtightness.

“When I was planning this research, I would get that typical question – oh, passive house couldn’t possibly be good for radon, could it?” he recalls. 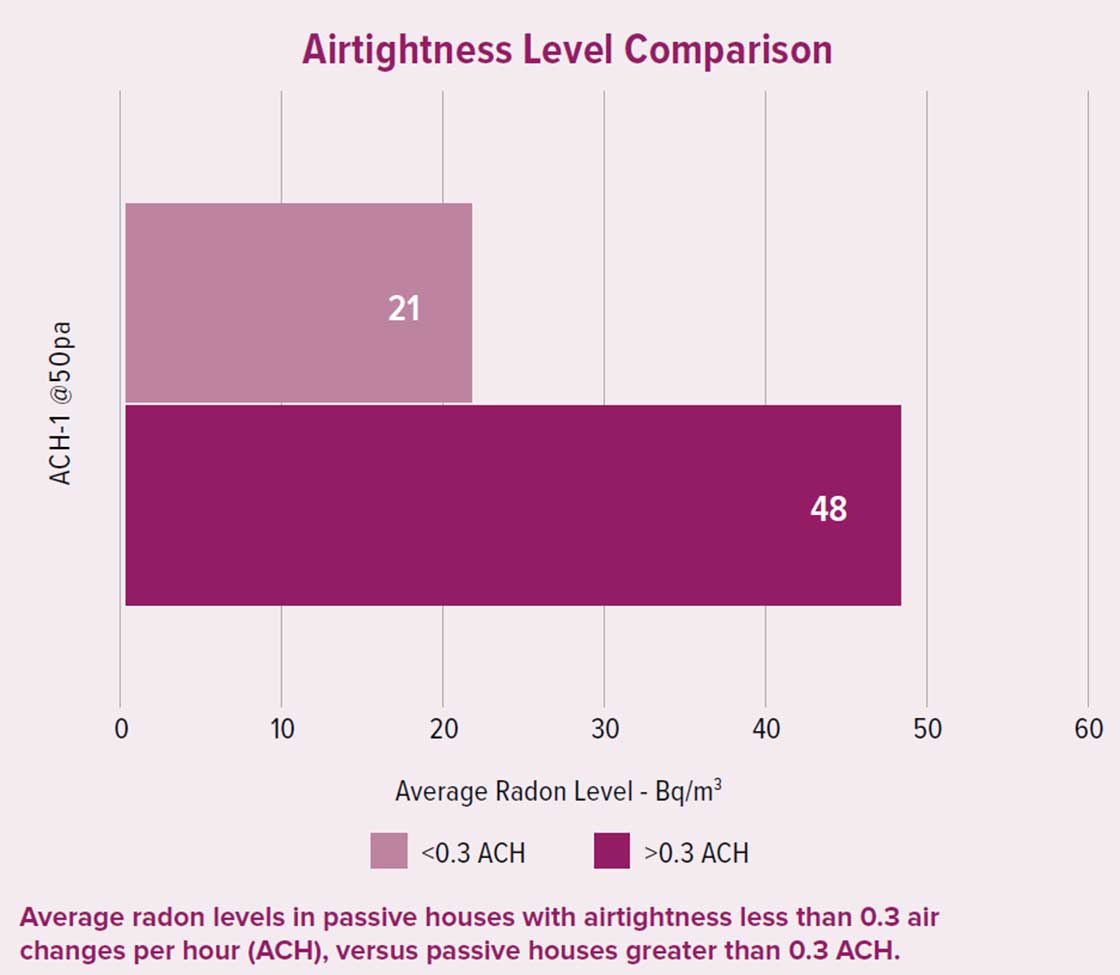 Of the 97 certified passive houses studied, 92 were new build, and five were Enerphit retrofits. Comparison homes in the immediate vicinity were found for 25 of the passive homes — these were of a similar size but of non-passive construction.

The Irish and UK governments have both set an ‘action level’ of radon gas concentration of 200 Bq/m3, above which remedial action to reduce indoor radon concentration should be taken. In the UK there is also a ‘reference level’ of 100 Bq/m3, which according to the public health authorities, all homes should aim to be below. 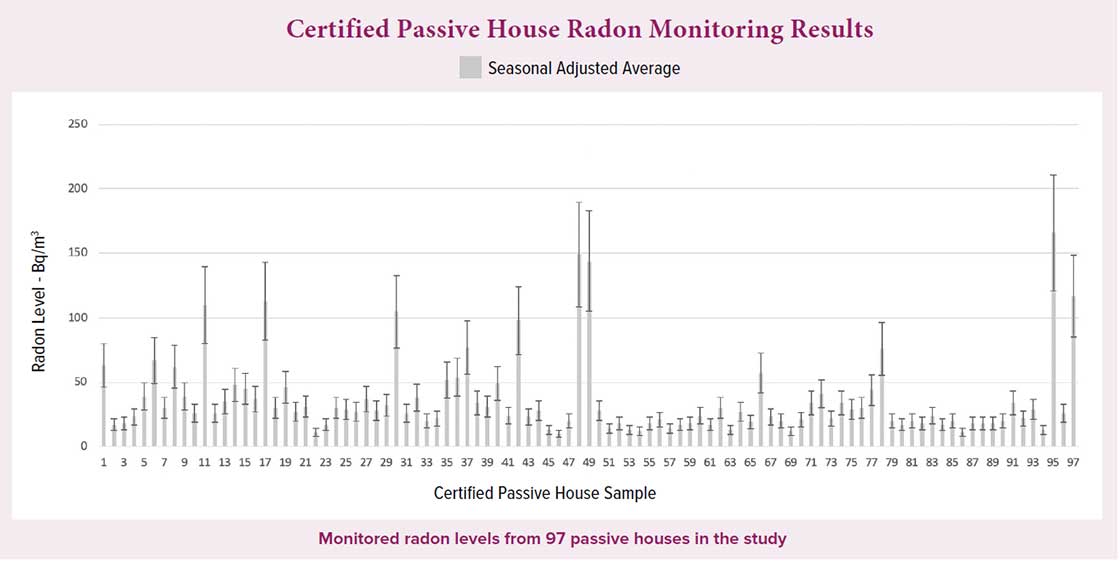 The average radon level in the five Enerphit homes was 72 Bq/m3, not as low as the new build passive homes, but still lower than the national average, and below the 100 Bq/m3 reference level.

There were 10 matched pairs of homes located in designated high radon risk areas. Only one of the certified homes there (an Enerphit retrofit) exceeded 100 Bq/m3, with a recording of around 150 Bq/m3. However, the identical but non-retrofitted home next door had one of the highest radon levels measured in the survey, at over 400 Bq/ m3.

Like the new build passive homes, the Enerphit dwellings had new, airtight floors installed in order to meet the airtightness requirement of the standard. And as mandated by the standard, they all had balanced whole-house ventilation.

But research from Germany suggests that in retrofits where wall airtightness has increased but no ventilation is added, radon levels tend to rise.

Winfried Meyer from the Federal Office for Radiation Protection in Germany recorded radon levels in just over 100 buildings refurbished to improve energy efficiency, and compared them with nearby unrenovated buildings from the national radon database.

Out of 144 rooms in 122 refurbished houses, 33 (almost one in four) of the rooms exceeded the 100 Bq/m3 reference level. However only four of 144 rooms in unrenovated homes – closer to one in 40 – exceeded this level. Radon concentrations of more than 300 Bq/ m3 were found in the living spaces of refurbished homes (five rooms), but in none of the unaltered houses.

The refurbished buildings commonly had new windows, and wall insulation (there was no information available about the floors). But “these buildings do not have ventilation systems,” Winfried Meyer reports. “The exceptions are the temporary mechanical ventilation of bathrooms and WCs in a few buildings.”

As she writes: “The current energy saving regulation in Germany (EnEV‐2015) stipulates that buildings must be airtight. In most cases however, manual window ventilation is considered sufficient.”

The author also looked at radon levels in new passive house dwellings, and found that these were no higher than the national average. This German dataset is not directly comparable with Irish and UK dwellings, as overall radon levels appear lower, and it is not possible to say whether this is a feature of the differences in construction and/or lifestyle, or even geology, between the countries. However, it does highlight a possible risk from retrofit when whole house ventilation, and possibly floor sealing, are not addressed.

Meyer concludes that “high radon levels in energy‐efficient houses are not inevitable... They can be avoided by adequate user independent air exchange and by limiting the amount of radon that enters the building.”

The role of ventilation

A couple of small experiments have demonstrated how effectively mechanical ventilation with heat recovery [MVHR] can remove radon from a living space.

Ventilation consultant Ian Mawditt’s own home is in a radon risk area. The house is a low energy retrofit, featuring both highly airtight fabric and whole-house MVHR. Because of the radon risk, Mawditt has also installed a dedicated extract fan beneath the remaining suspended section of floor. (Suspended floors are generally not airtight, and the floor of the undercroft can often be bare earth with no covering, though in this case there is a concrete slab over it).

To investigate the role of both systems, he tested the effect of turning them off. The MVHR flow was turned down from 0.4 to 0.1 air changes per hour for two weeks (during a short absence). This saw radon levels rise steeply. After two weeks the level reached around 600 Bq/m3, around ten times the base level. At this point the occupants returned and the MVHR was returned to normal running – which saw the radon clear equally rapidly. Disabling the underfloor extract fan on a separate occasion also saw a rise in radon levels, although not as dramatic. The effect was again reversed when ventilation was re-instated.

In a new build passive house in a ‘high-radon’ area in Germany, a similar, if less dramatic effect was observed when ventilation was turned off: radon levels rose between three and seven fold.

What about the floor?

Alongside the ventilation, another notable feature of certified passive house and Enerphit homes is an airtight floor – necessary in order to achieve the airtightness targets of these standards. This is in contrast to most existing homes and many standard new ones, particularly in the UK.

In Ireland, amended building regulations in 1998 required radon preventive measures in new buildings in designated high radon areas. The UK building regulations also require radon protection in higher radon risk areas. In the UK, public health research suggests the presence of a radon barrier does reduce radon levels, with 30% of homes without barriers in high-radon areas having levels of radon above 200 Bq/m3, while only 12% of those with a barrier do.

Similarly, Barry McCarron reports, the prevalence of above action-level homes in Ireland has decreased since the building regulations were amended. However, radon barriers alone do not guarantee safe radon levels, as the national databases confirm.

As Barry McCarron warns, these barriers are not always well installed. “It’s fiddly to install them correctly – the barrier needs to be taped in to preserve the airtight seal. They are also vulnerable to damage before the slab is poured, if care is not being taken on site.” High radon levels have also been observed in homes outside the highest radon risk areas, where protection will not necessarily be mandated.

Although guidance suggests a radon barrier should be installed in such a way as to prevent soil gas leakage into the dwelling, there are no specific installation checks.

An even greater concern is radon levels in existing buildings. Many existing homes in the UK and Ireland have suspended floors and no radon mitigation at all.

Barry McCarron’s research found a couple of existing homes with very high radon levels among the 25 that were sampled. “My sense is that some of our older stone houses are potentially at high risk of radon build-up,” he says.

While new dwellings have at least some purpose provided ventilation, older homes may have blocked chimneys, reasonably airtight fabric (possibly including replacement windows) but rely mainly on window opening for ventilation. As was suggested in the research from Germany, energy retrofit may make this situation worse. Suspended floors are often retained unless a very comprehensive retrofit is being undertaken. But the walls, doors and roof may be made more airtight by installing new components, draught-proofing, and insulation.

Overall, these studies indicate that combining effective balanced ventilation with a sealed floor (incorporating radon protection if in a high-risk area) reduces radon risk. Both of these features come as standard in a certified passive house or Enerphit.

A complete airtight envelope, validated by testing, plus properly designed, installed and commissioned balanced ventilation, are the cornerstones of low energy construction and healthy and comfortable living conditions. They are crucial elements in a radon mitigation strategy, too. There seems little reason not to build, and retrofit, everything this way. 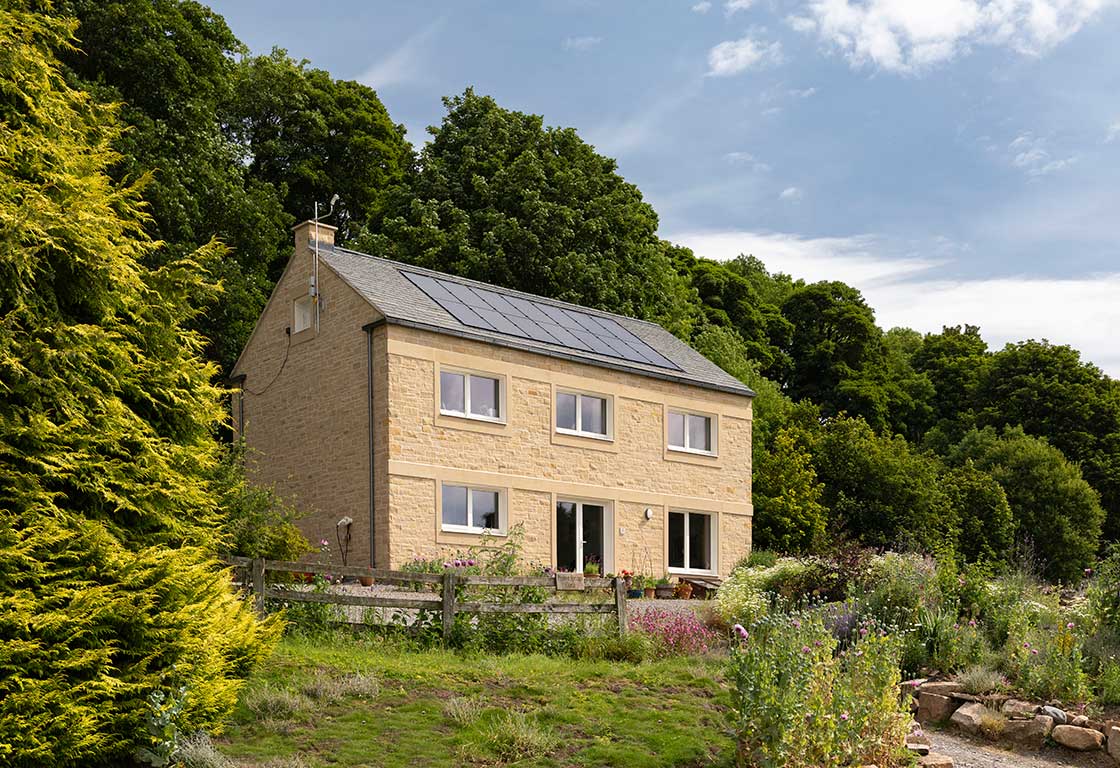 Preston Springs (above), a new certified passive house, has much lower radon levels than the 1890s-built house right next door (below). Preston Springs is a new passive house in Yorkshire designed by architect Mark Siddall. The ‘Radon in Homes in England’ 2016 data report defined the average radon concentration for the Richmondshire district where it is situated as 100 Bq/m3. Preston Springs recorded figures of just 30 Bq/m3 in the ground floor living room and 37 Bq/m3 in the upstairs bedroom.

The comparison building right next door, built circa 1890, has more elevated levels of 127 Bq/m3 on the ground floor and 108 Bq/m3 on the first floor, figures more in alignment with the Public Health England data for this postcode area. Overall the passive house radon level is 71% lower than the dwelling next door.