How the potential shutdown of ocean currents, fuelled by melting ice caps, could dramatically change our climate.

If you look at Ireland on an atlas, one thing that is striking is just how far north the island is located. Follow the lines of latitude east across the Atlantic and we are parallel with the Labrador peninsula in northern Newfoundland. This bleak, chilly landscape, where average winter temperatures rarely rise above zero degrees Celsius was famously portrayed in The Shipping News, a novel by Annie Proulx.

Ireland’s coldest month, in contrast, is January, with average temperatures of 5C; relative to Newfoundland, this is positively balmy. The difference between Ireland and Newfoundland is the Atlantic Meridional Overturning Circulation, or AMOC. This is just one part of a complex global system of ocean currents that act like a conveyor belt for currents. The AMOC transfers vast amounts of heat from the Caribbean region and brings this warmth to north western Europe.

One obvious beneficiary of this bounty is Garnish island in Bantry Bay. It enjoys an almost sub-tropical climate, as the warm surface waters drawn from the equator lap its shores, allowing it to support exotic plant species that would not survive elsewhere in Ireland.

Earlier this year, two research papers1 published in the respected journal Nature reached the same disturbing conclusion: the AMOC has slowed down by some 15% in recent decades, and the trend appears to be accelerating. The impacts of global warming, including the rapid melting of hundreds of billions of tons of freshwater from the Greenland ice sheets, is disrupting this vast current.

The idea of the AMOC (also known as the Gulf Stream) closing down suddenly was dramatised in the 2004 film, The Day After Tomorrow, which imagined a shutdown of the ocean currents triggering a series of epic superstorms which then plunged the northern hemisphere into a new ice age. 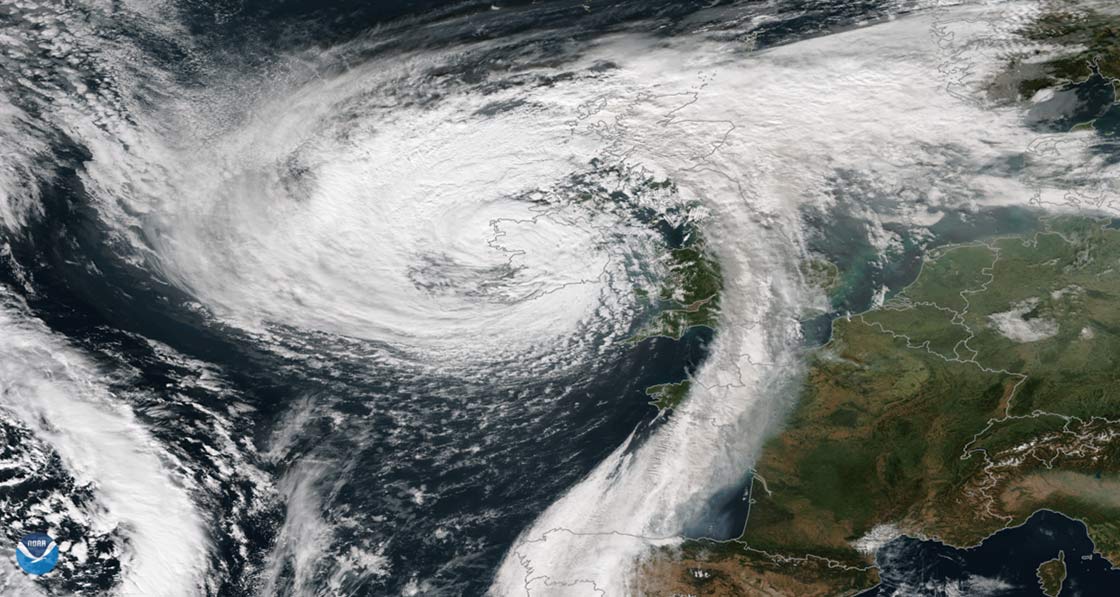 While scientists scoffed at the liberties Hollywood took with science, the basic premise that the AMOC could shut down in a relatively short time frame, such as by the end of the century, and that this in turn would have catastrophic consequences for the entire north Atlantic region is entirely plausible.

Just how severe these impacts might be was explored in depth by Nasa’s former chief scientist, Dr James Hansen, and his colleagues in a 2016 paper2. “If Greenland fresh water shuts down deep water formation and cools the North Atlantic several degrees, the increased horizontal temperature gradient will drive superstorms, stronger than any in modern times,” Hansen explained in a video explaining his research3. “All hell will break loose in the North Atlantic and neighbouring lands.”

Hansen’s research team identified a previous period of rapid global warming around 120,000 years ago, towards the end of the Eemian period. At that time, a collapse of polar ice, fast rising sea level and a shutdown of the AMOC led to superstorms of epic dimensions sweeping the region.

A number of rocks, weighing up to 1,000 tons each, have been located perched on a cliff 20 metres above the Atlantic on an island in the Bahamas. Hansen believes these giant boulders were scooped up from the sea floor and tossed inland during a period of megastorms much bigger than anything modern humans have ever endured. 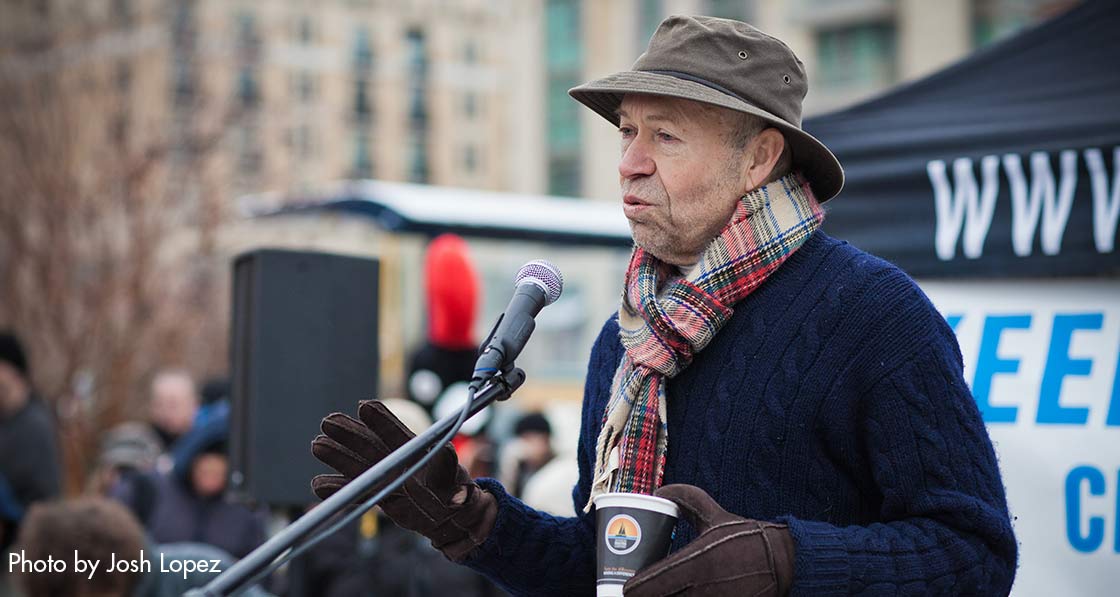 James Hansen, former chief scientist at Nasa and one of the world’s most renowned climate experts

The AMOC shutdown would lead to the temperature difference between the newly chilled northern hemisphere and the even hotter tropics increasing sharply, and this temperature difference would be the fuel for catastrophic megastorms. Storms notwithstanding, the AMOC shutdown would likely cause land temperatures in Ireland to plummet by several degrees, effectively wiping out our agricultural sector.

And while climate change almost never receives serious or sustained media coverage in Ireland, the recent confluence of extreme weather events has left many people wondering aloud if this is a bitter foretaste of what the scientists have been warning about for decades. The summer of 2018 has seen Ireland bask in an extraordinary sustained heatwave, triggering the worst drought in almost a century.

As recently as March 2018, Storm Emma swept in a severe snow event. A few months earlier, in October 2017, the tail end of Hurricane Ophelia battered Ireland, leaving three dead and a swathe of destruction across the country. A hurricane has never before been recorded in this part of the north Atlantic.

And just two months earlier, a so-called ‘once-in-a-century’ monster flooding event in August 2017 centred in Donegal triggered landslides, with bridges and roads swept away in the deluge.

Commenting on the Donegal downpour, UCC climatologist, Dr Kieran Hickey suggested to me4 that: “phrases like ‘once-ina- hundred years’ to describe these extreme events really need to be retired”. Over the last decade or so, he estimates that Ireland has experienced an extreme weather event, on average, every six to 8 months. This represents a staggering four to five-fold increase in the frequency of such extreme events versus typical Irish weather in the 20th century.

While there is little doubt the deluge in Donegal was a freak weather event, “if we were to do an in-depth analysis, I suspect we would detect a climate change element in terms of its severity,” added Dr Hickey.

An EPA-funded climate attribution project involving Dr Hickey and colleagues at UCC, as well as Prof Myles Allen of Oxford University will spend the next two years investigating the specific fingerprint of climate change on recent extreme weather events in Ireland. This may help to answer that seemingly eternal question as to whether and to what degree any specific extreme weather event may be influenced by climate change.

While it is standard practice among weather forecasters to be reluctant to attribute any single event to climate change (given the huge natural variability within the climate system), climate researchers have been able to establish with a high degree of confidence that man-made climate change dramatically increased the likelihood of the extreme heatwave that swept much of Europe during June 20175.

The researchers who carried out this work are known as World Weather Attribution (WAA), an international coalition of scientists who examine and try to quantify the role of climate change in individual extreme weather events.

The extreme temperatures that scorched the European mainland (but missed Ireland) last summer, and that left Ireland sweltering this year, will become commonplace by mid-century “unless action is taken to rapidly cut carbon emissions”, the WAA stated. “Since 1900 we have seen the likelihood of a summer as hot as 1995 increase 50-fold”, NUI Maynooth climatologist, Dr Conor Murphy, wrote in the Irish Times6. “By the end of the century our warmest summer on record up to now could plausibly by then be a cool summer,” he added.

The pattern of extreme weather that has rocked Ireland and many other parts of the world in just the last year fits eerily well into the more pessimistic modelling scenarios of climate specialists, who warn of the impact of ‘supercharging’ the global climate by pumping more and more CO2, along with other greenhouse gases such as methane, into the global atmosphere.

Rigorous instrumental measurement of atmospheric CO2 only began as recently as 1958, but we have accurate records stretching back some 800,000 years. In 1958, thanks to the pioneering measuring work of Dr Charles Keeling, we know that global atmospheric CO2 levels stood at 316 parts per million (ppm). Since then, CO2 has increased by almost 40% to today’s level of around 410ppm.

In other words, we have in just the last 60 years drastically altered the basic chemistry of the global atmosphere. Today’s CO2 levels are likely the highest experienced on Earth for at least three to five million years. Since the end of the last ice age some 12,000 years ago, humans have flourished, our numbers expanded exponentially and our impacts are now being felt in every corner of the biosphere, from the upper atmosphere to the ocean basins.

The current interglacial era, known as the Holocene, has been perfect for humans, gifting us a prolonged period of thousands of years of, by historical standards, stable, benign climate, which has made global agriculture possible. But many earth scientists now say that the Holocene is over and that we are in a new geological era, the Anthropocene — the Era of Man.

We have known for decades that loading vast amounts of CO2 into the global atmosphere would lead to a sharp increase in global average temperatures. Already, the world has warmed by over 1C since pre-industrial times. Worse, this heating will spike by 2C, 3C, 4C, or even more this century if carbon emissions and land uses changes such as deforestation continue unabated.

This may not at first sound catastrophic, but it represents the most rapid rate of change in atmospheric conditions on Earth since a large asteroid slammed into the Yucatán peninsula in Mexico some 66 million years ago, triggering the global cooling event that led to the extinction of the dinosaurs.

In 2012, the World Bank commissioned a report to better understand what a world 4C hotter than today might look like. Its president, Jim Yong Kim described this level of temperature increase as a “doomsday scenario” that would trigger widespread crop failures and malnutrition and dislocate tens of millions of people from land inundated by rising seas and regions of the Earth, such as much of the Middle East, that become too hot for human habitation or agriculture.

Consider the political impacts on Europe of hundreds of thousands of refugees fleeing failed states in Africa and the Middle East in recent years. Multiply these numbers by 100 or even 1,000 and you begin to grasp the existential nature of the climate crisis.

If the status quo continues, Ireland’s island status will offer only the briefest of respites from the wrenching climate-fuelled upheavals that will drastically reshape our world in the coming decades.