Devon one off pushes limits of passive

Huge expanses of unshaded glass are usually a taboo for passive house designers, but with his clients insistent on maximising their wide-angle coastal panorama, this project’s architect found clever ways to integrate the passive house approach with wrapping the house’s ground floor in glass.

If you were building a large house with southwest- facing views over a beautiful bay stretching out to the Atlantic ocean, it’s natural that you’d want to have a design with lots of glass to make the most of the stunning vista. Sure enough, this two-storey, four-bed passive house in Croyde Bay in north Devon, England, has huge expanses of glass on the ground floor.

Of course, there is a balancing act between glazing and shading if you don’t want a house like this to overheat on sunny days, but owners Rupert and Charlotte Hare were adamant that they didn’t want their views of the bay restricted in any way. 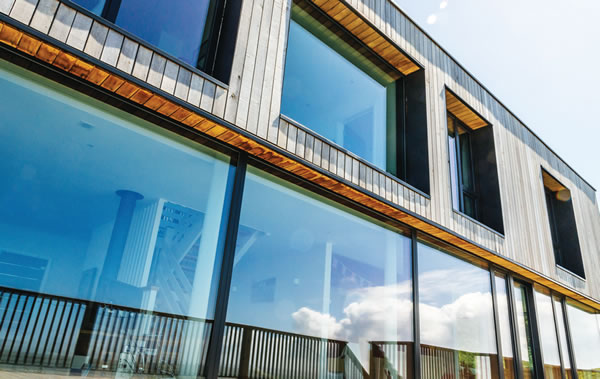 But they were also keen that their new home, built on the site of Rupert’s grandmother’s old four-bed bungalow, meet the passive house standard, partly because of the difficulty in getting basic utilities like gas to the remote location, and because of the expectation that energy prices would rise in the future.

So how did they reconcile a demand for unimpeded views with a desire to build a passive house? After all, even the most effective ventilation and cooling systems might struggle to counteract the glasshouse effect on a warm day.

This was the first issue that occurred to architect Tomas Gartner of Gale & Snowden when he started work on the project. “We had a building which was glazed on three sides, [and I had to] work it into a passive house without external shading, relying on just the ventilation strategy, and a client who was not prepared to put in flexible shading or anything like that,” he says. 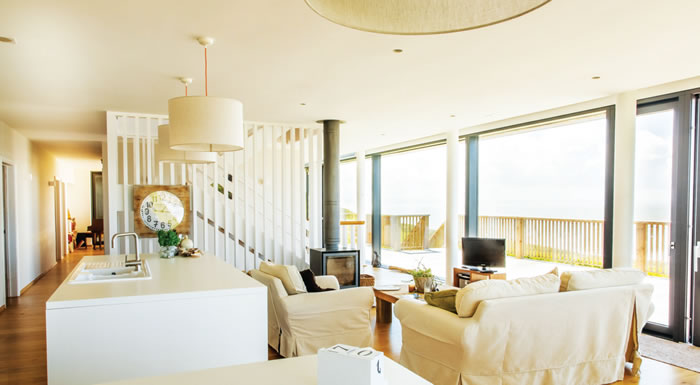 “At the starting point our first reaction was: ‘no…can’t do that’. It won’t perform as a passive house like that. ”Gale and Snowdon had been brought in to work on the detailing and planning for a design produced by another architect. The house hadn’t been designed with the passive house standard in mind.

The plans did make the most of the scenery, however. “The views at that place are unbelievably outstanding,” says Gartner. “So if you go there this is exactly what you want. You want to live in a glass box so that you can constantly see the sea on three sides.” He started with some passive house modelling and this led to a partial redesign, which included taking out some of the glazed areas that were predominantly west-facing.

So what was his answer, then, to the likely overheating issue? “We actually applied design strategies which are more used in the Mediterranean for passive houses. We minimally insulated the floor construction and the rear wall construction, so that we passed building regulation requirements, and essentially then used the ground behind and underneath the building as a heat sink.”

These parts of the building were only insulated to the minimum building regs spec, rather than to the passive house standard, so that heat inside will escape into the cool ground more easily, helping to prevent overheating in summer. 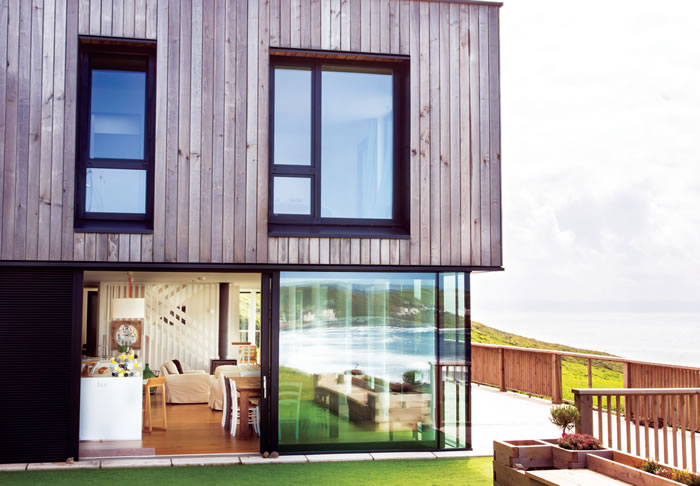 “Reducing the insulation levels will increase heat losses in summer and therefore cause a cooling effect,” Gartner says. “This needs to be carefully balanced because it also increases heat losses in winter and any cold spots that could lead to condensation or discomfort of course have to be avoided, [and] for this a minimal amount of insulation has been allowed for.”

Oyster Falls, which is 40 metres from the water’s edge, has been built using traditional blockwork with steel frame supporting the ground floor. “The design is essentially a glass box on the ground floor, and more solid and restricted glazing on the first floor,” Gartner says.

(left to right) Knauf Rafterroll insulation packed between the TGI joists, forming the outer skin of the first floor walls; airtightness detailing at the wall-tofloor junction; construction of the retaining wall, which features an inner leaf of concrete block followed outside 100m of Jablite insulation and then fully tanked concrete retaining wall externally

Gale & Snowden also specified some flexible external shutters and brise soleils to give the option of shade when it’s needed, but the clients didn’t want them. However the triple-glazed windows – supplied and fitted by passive house specialists Ecohaus Internorm – do their bit to moderate the overheating thanks to a low G value of between 35 and 40%, meaning they can let in light but not so much heat radiation.

Like Gartner, the contractor on the project, Eddie Acford of Point 6 Projects, also specialises in passive house builds (the name Point 6 derives from the passive house airtightness standard). “It was a really difficult project to build actually,” he says of Oyster Falls —this was due to the topography of its site, the condition of the substrata, the location, design of the building and complex civil engineering.

Among the many civil engineering issues (which took six of the roughly 12-months of the build duration to resolve) was that the house is cut into a hillside that supports the main road between Braunton and the village of Croyde. “Extra measures had to be taken into consideration when building the foundations and the retaining wall to minimise risk of the road collapsing,” Acford says. This included a five-metre retaining wall.

The changeable climate was another factor that had to be taken into account. “The environment is quite harsh, so we had to apply special finishes to all the windows, while all external fixes have to be stainless steel for example.” All metal cladding to the windows and doors had to be marine grade. Strong glazing to the large sliding door was also needed to withstand the wind.

Inside, the house has 345 square metres of useable floor area, including four bedrooms, a boot room, a master bedroom with ensuite, an open plan ground floor area including kitchen, dining, and living space, with a separate utility room, larder, and storage. The heating duties are handled by a Genvex air source heat pump that supplies low temperature radiators.

The total cost of the project came in at £900,000. Gartner estimates the passive house element probably added 10% to the cost compared to a building regs compliant build up, but says the house was always going to cost more because of the size of the components needed, the overall quality of the build, and the exposed location. “A lot of the costs are essentially into the site itself, cutting into the ground, retaining the walls above the two storeys really,” he says. 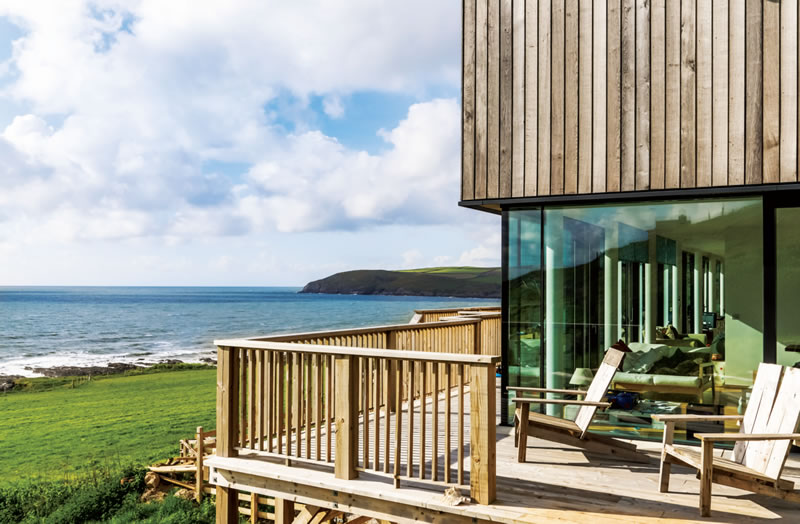 Like Gartner, Acford is impressed with the stunning location of the site, but as an experienced passive house contractor he is even more impressed by how the building manages to defy conventional passive house design with its strong glasshouse nature and its exposed location, with the indoor temperature still sitting as they do around 20-21C. “It’s a testament to the design really, that a building in such a location with such an amount of glazing and such complexity can work in such a way. It is really something.”

He acknowledges that the house does overheat occasionally, but that’s more to do with the owner’s aesthetic preferences. Tomas Gartner adds that, even with a Paul Novus MVHR system, the building needs a good oldfashioned daily manual ventilation strategy during the summer – opening the windows in the morning and in the evening – in order to keep things comfortable.

Unlike many low energy building approaches, passive houses are subject to overheating targets – with an obligation to ensure that the building doesn’t exceed an average temperature of 25C for more than 10% of the year. According to Gartner the calculated figure for this building was just 1.5% – albeit based on calculations including a flexible shading device that the client declined to install.

He concedes that if the house is unoccupied for a number of days the building will heat up inside but, at the same time, he fully understands Rupert and Charlotte’s desire not to have any percentage of the windows cloaked by a solar shade or a shutter.

“There was never a discussion about that to say ‘no, you can’t have the views’ or restrict window sizes or glazing because that is really what that location is about. So it was always about trying to make that work,” he says.

Gartner, who has worked with Exeter City Council on passive housing, says the project was a new experience for him in terms of testing the ground heat sink effect, as well as studying passive house design strategies in hotter countries where overheating is a more common issue. The finished house is testament to the fact that passive house standards can be achieved with even the most challenging designs, locations and climate. “It is, for me, a real eye-opener that you can still achieve that with passive house, and that you have the flexibility in that design in that it suits a challenging brief like that,” he says. 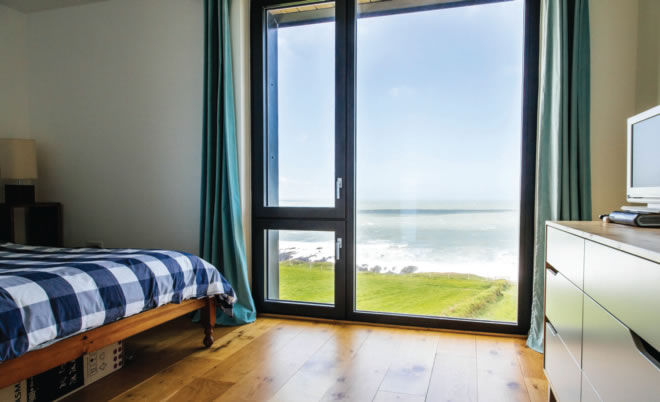 The house features Internorm passive house certified triple-glazing throughout, including for individual window units and for the extensive glazed walls on the lower floor

But what’s the verdict from the clients? “We are very happy with the house and thoroughly enjoy it whatever the weather,” says Rupert, adding that they particularly like “the view through the glass, the feeling of security from the elements and the ambience within the building due to the lack of heating systems.”

Thermal bridging: Mixture of cast insitu concrete, masonry and steelwork with the base of some of the walls being Foamglas. All the masonry ties are Ancon Teplo 2 low thermal conductivity cavity wall ties made from reinforced basalt fibre. Fully insulated reveals. Thermal bridges ambient: -0.014 W/mK / perimeter: 0.04 W/mK / floor slab: 0.04 W/mK