Despite having no construction experience, self-builder Eamonn Fleming decided he could build a new family home more cheaply — and with better attention to detail — if he did it himself. And even though he didn’t set out to build a passive house, he managed to meet the standard while doing almost all of the work in conjunction with his father, while exceeding the targets of Ireland’s nearly zero energy building definition.

This house was granted full planning permission before the possibility of going passive ever arose. The fact that Eamonn Fleming went on to build a house that comfortably met all of the passive criteria is all the more remarkable given he had no building experience whatsoever.

Tim Horgan of Passive House Design was the passive designer and energy consultant on the build. He says that Fleming’s attention to detail during the project was unbelievable. “He’s the type of guy who could turn his hand to anything,” says Horgan.

It was research that eventually brought Fleming around to the passive way of doing things. The more he looked into it, the more people he talked to, the more it seemed to make sense. What appealed most to him was that the passive approach gives you clear, unambiguous targets.

“It began to look like the way to go,” says Fleming. “You’re building to a standard, and you know if you hit all the markers, you’re going to have a good quality house.”

Going self-build wasn’t a foregone conclusion either. It was a decision that was taken more out of necessity than choice. “Initially, I had gone to a builder and got a quote, but it was a bit crazy in terms of our budget, so we just decided we’d go self-build.” 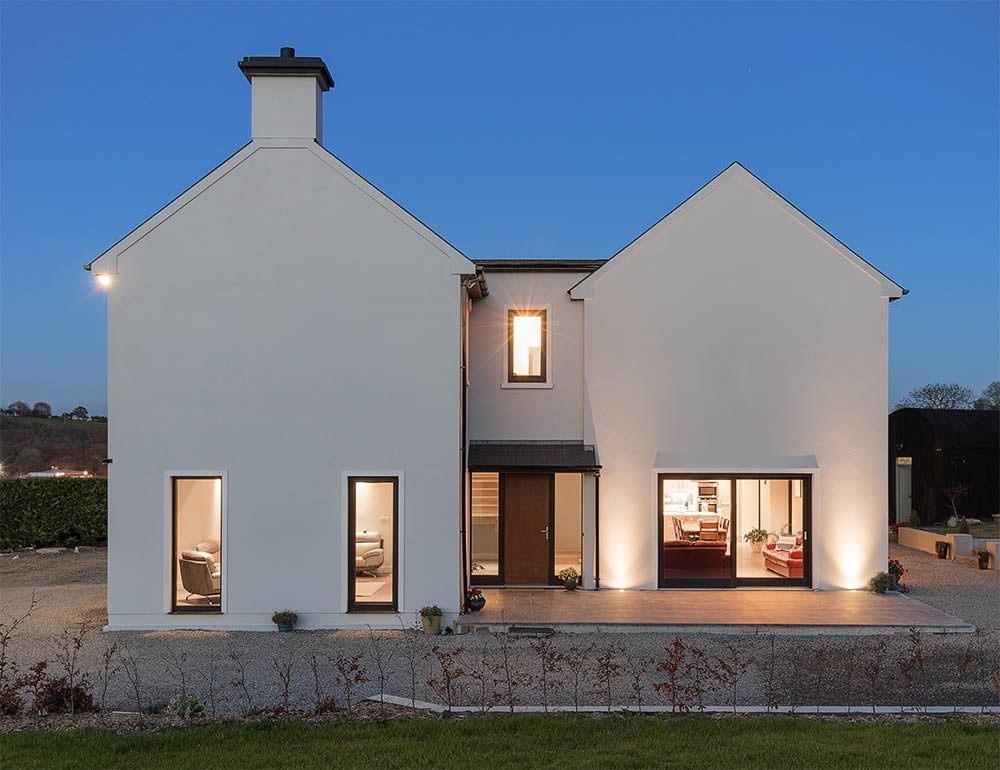 So he went and bought a cheap second-hand JCB, took it home and began digging the foundations himself. And when the building started, he recruited his dad – a retired mechanic – to give him a hand. Between them, they did almost everything.

The good news, Fleming discovered, was that designing for light is broadly consistent with passive house principles. The decision to go passive didn’t prompt any changes in orientation or layout. Tim Horgan ran the design through the passive house software, PHPP, and returned only minimal changes to the plan.

Using the Killarney climate data, the software did predict a substantial overheating risk. To mitigate this, Horgan recommended a reduction in the number of roof lights and the installation of 1.2m deep louvers in the south-facing ground floor doors and windows in order to reduce the risk to zero. 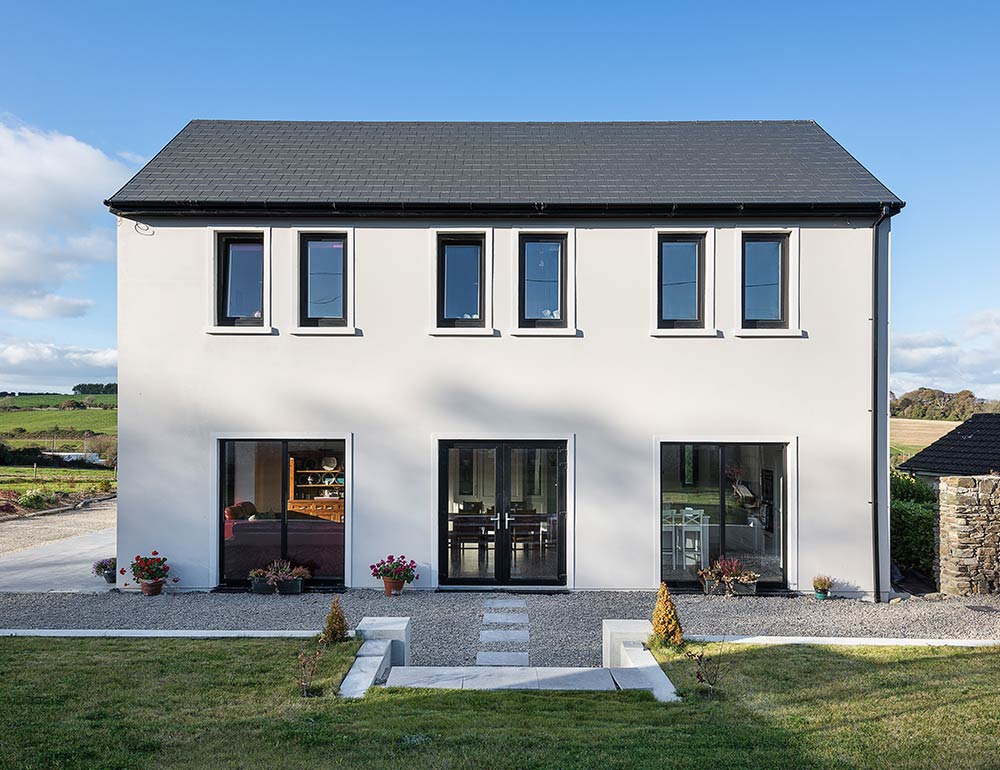 Fleming went for a cavity wall construction – with a twist. The internal leaf is block on the flat, with a 300mm wide cavity, then a standard outer leaf. He considered going with external wall insulation but didn’t like the way some of the external renders he had seen discoloured over time. “Sand and cement render is tried and tested in Ireland, it’s stood the test of time. Plus we’re only six miles from the sea here. I was confident that sand and cement would give us better protection.”

The block on the flat gives additional structural support to the hollowcore floor above, plus the extra blocks boost the thermal mass of the structure. Before construction began, Tim Horgan also suggested that they borrow a design detail from vernacular architecture, building the window reveals at a sixty degree angle to the vertical. 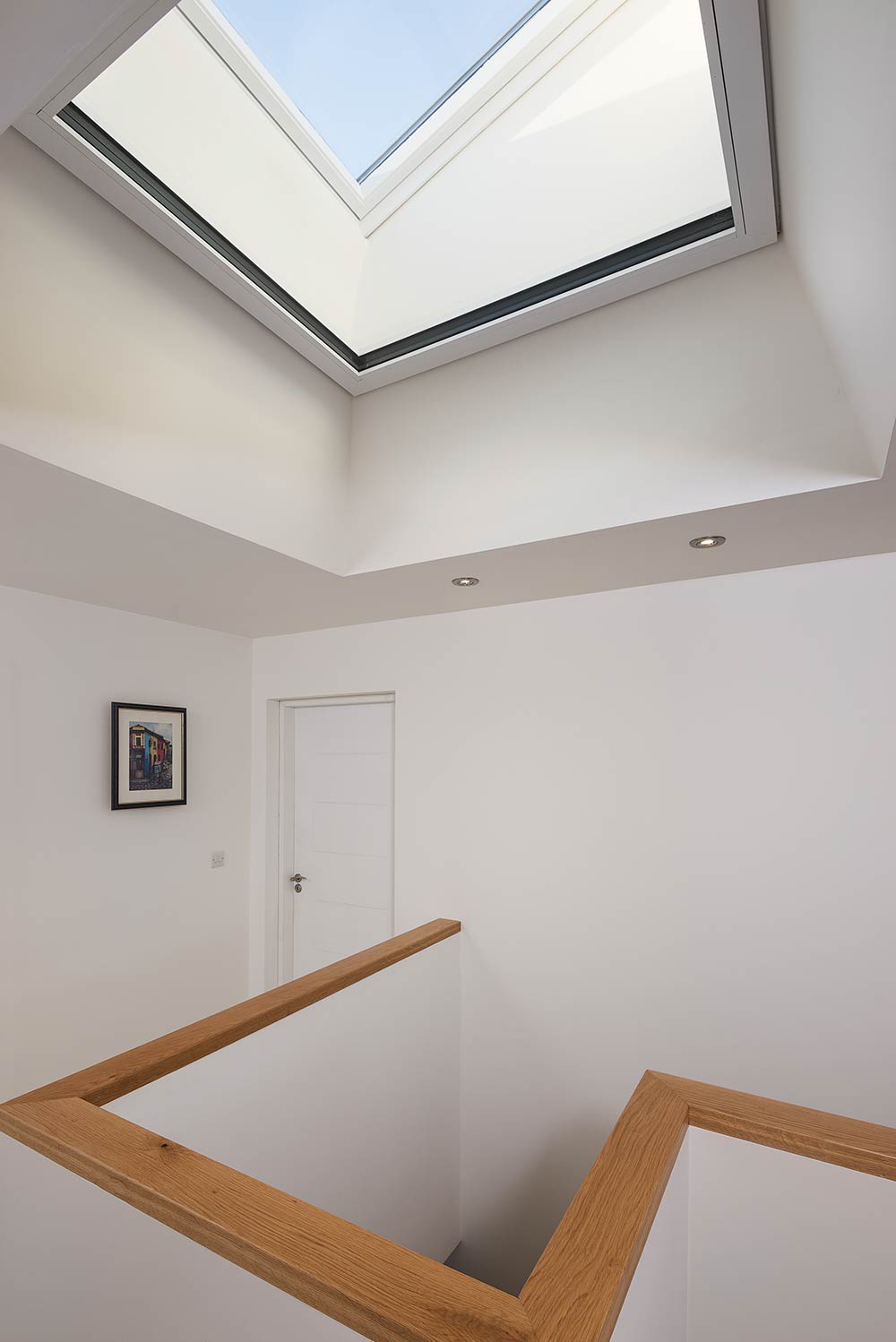 The house features a double-glazed Velux roof window for natural light, with a triple-glazed Munster Joinery Passiv Aluclad window lying horizontal underneath this near the top of the insulation layer

“The splayed internal reveals allow the light to progress deeper into the rooms. In Eamonn’s house, we have wall thicknesses that verge on the same portions as the old traditional cottages. It seemed logical to go with it.”

Horgan drew up all of the thermal bridge details needed to achieve passive standards, and Eamonn Fleming installed each one himself. Horgan points out that the fact the house has quite a straightforward design, without difficult junctions, made this element of the build relatively painless. 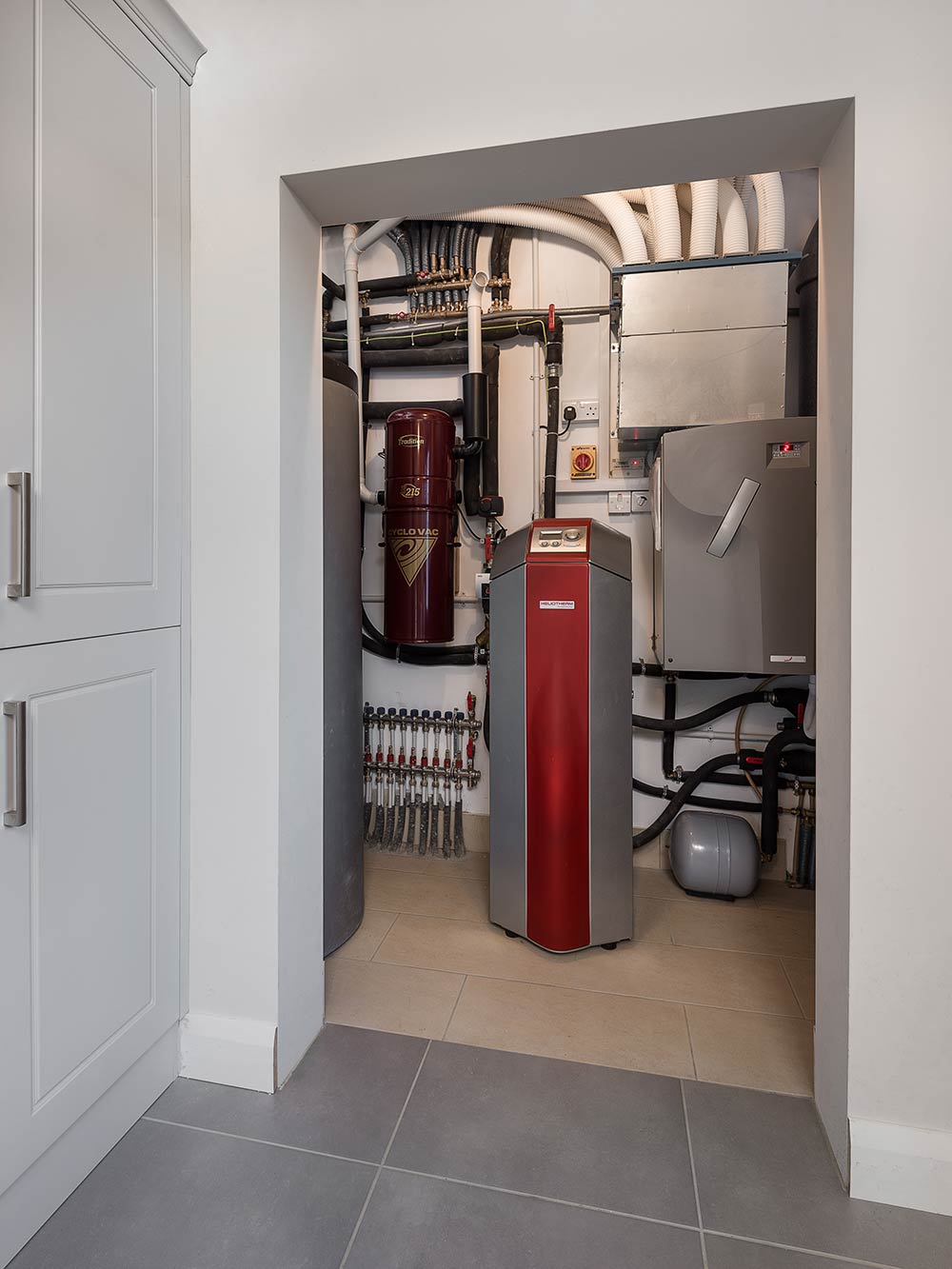 Though no stove has been installed, there is a chimney. Fleming explains that it’s effectively a false chimney. There’s no chimney breast, the flue is capped at either end and only extends as far down as the attic, where it lies outside the thermal envelope.

The chimney, Fleming explains, was a kind of an each-way bet. “I wasn’t sure how the house was going to work out, so I put that in, in case I ever wanted a stove. But the way things have worked out, I don’t think we’ll ever use it.” While the thermal bridge detailing didn’t cause too many headaches, it was achieving passive standard airtightness that prompted the most research and the most work.

“I thought long and hard about letting somebody else do it,” says Fleming, “but the reason I decided to do it myself all came down to trust. Let’s say you had four fellas in doing it. You don’t know how dedicated they are. Are they just going to put on the tape as quickly as they can and get out?” 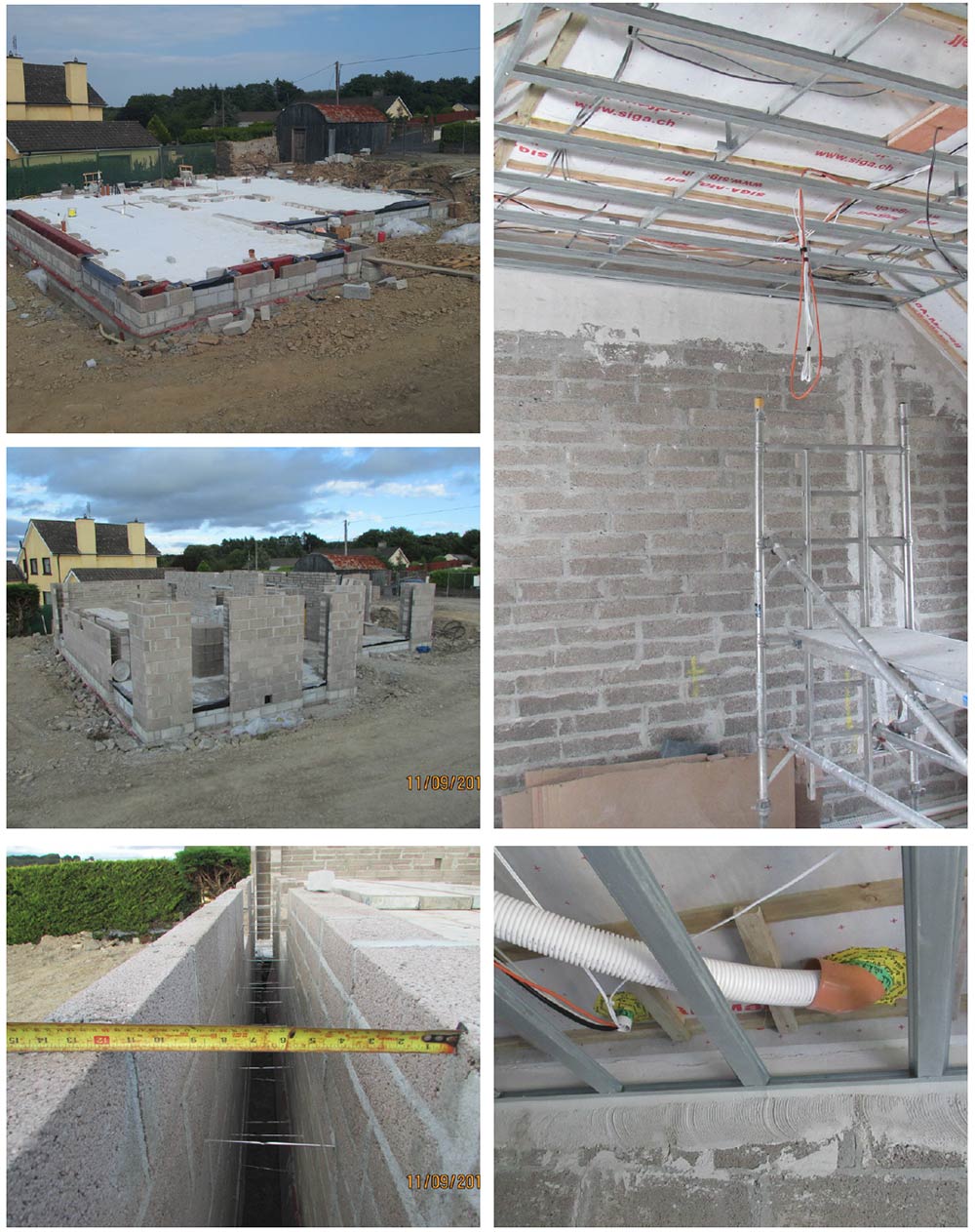 (anti clockwise from top left) the ground floor is insulated with 300mm of Xtratherm Hytherm expanded polystyrene insulation; construction of the cavity-wall ground floor, with two rows of Quinn Lite low thermal conductivity lightweight concrete blocks at the wall-floor junction; the ultra-wide 300mm wall cavity, which was fully insulated with Envirobead; a suspended ceiling system to house building services inside the Siga airtight layer; MVHR ducting in the roof, with airtightness taping where the ducting penetrates the airtightness layer.

The dilemma was complicated by the fact that the wet plaster finish would form the primary airtightness barrier, with tapes and membranes integrated at key junctions. But because these tapes would all be buried beneath the plaster, there would be no way to remediate problems if they arose.

“He went and bought a JCB, took it home and began digging the foundations himself.”

Instead, Fleming began researching the process and went on to fit all of the tapes and membranes himself. “I just went room to room. I started at the top and worked down.” The day of the blower door test, he acknowledges, was particularly anxious. “The fella who was doing the test asked what I was hoping to get. I said ‘passive’, and he said, ‘passive is very hard to get’.”

In the end, the house achieved a result of 0.22 ACH at 50 Pascals, which must be one of the best airtightness results ever achieved on a self-build in Ireland. “The most important things I think are forward planning and research, and keeping the place clean and tidy. Although everyone on the build was new to passive, I found once I explained what I was trying to achieve that people were accommodating and came on board.” 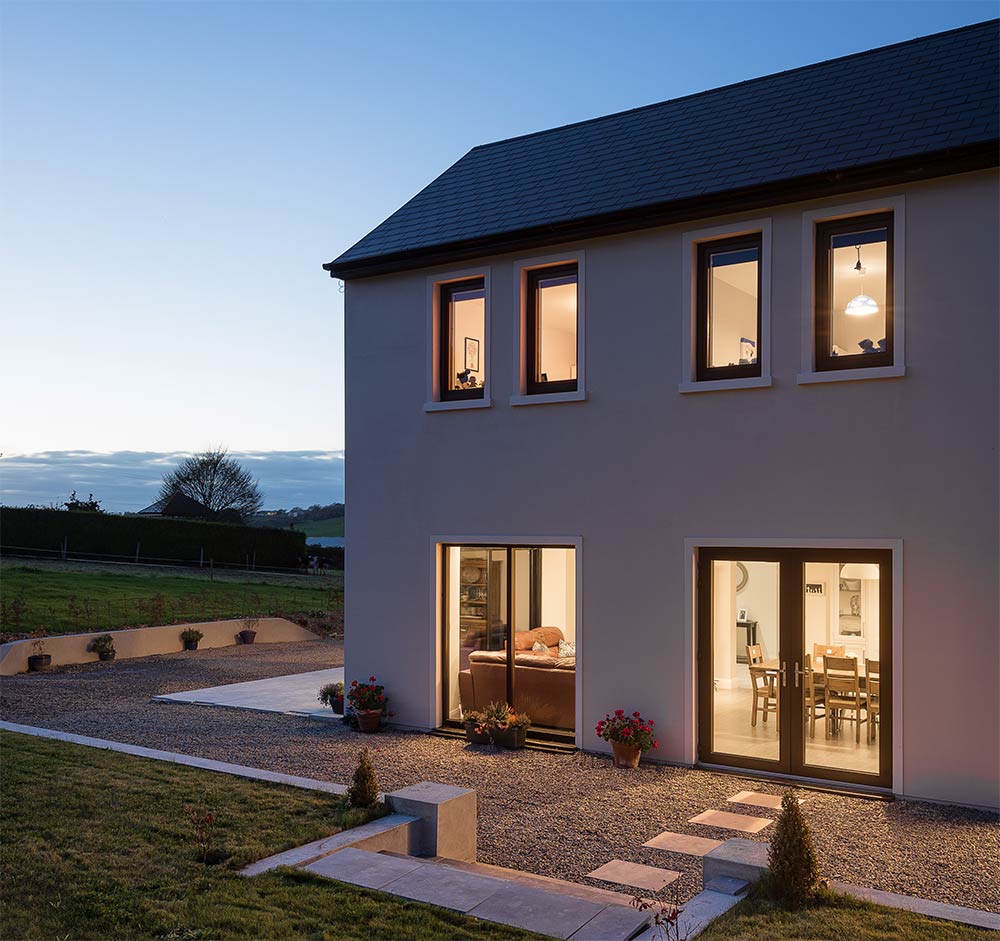 Electrician William Fleming was a prime example. When Eamonn explained how he needed to bend the conduit containing the electrical cables back into the dropped ceiling, the electrician returned the next day with a circular instead of oval conduit, which was much easier to manipulate into position.

“Any time you wanted to make a break through [the airtightness layer],” says William Fleming, “you just confirmed with Eamonn that he was happy with that, whereas normally you’d motor away, you’d make your breakthroughs and whatever they wanted to do afterwards, they would do afterwards.” 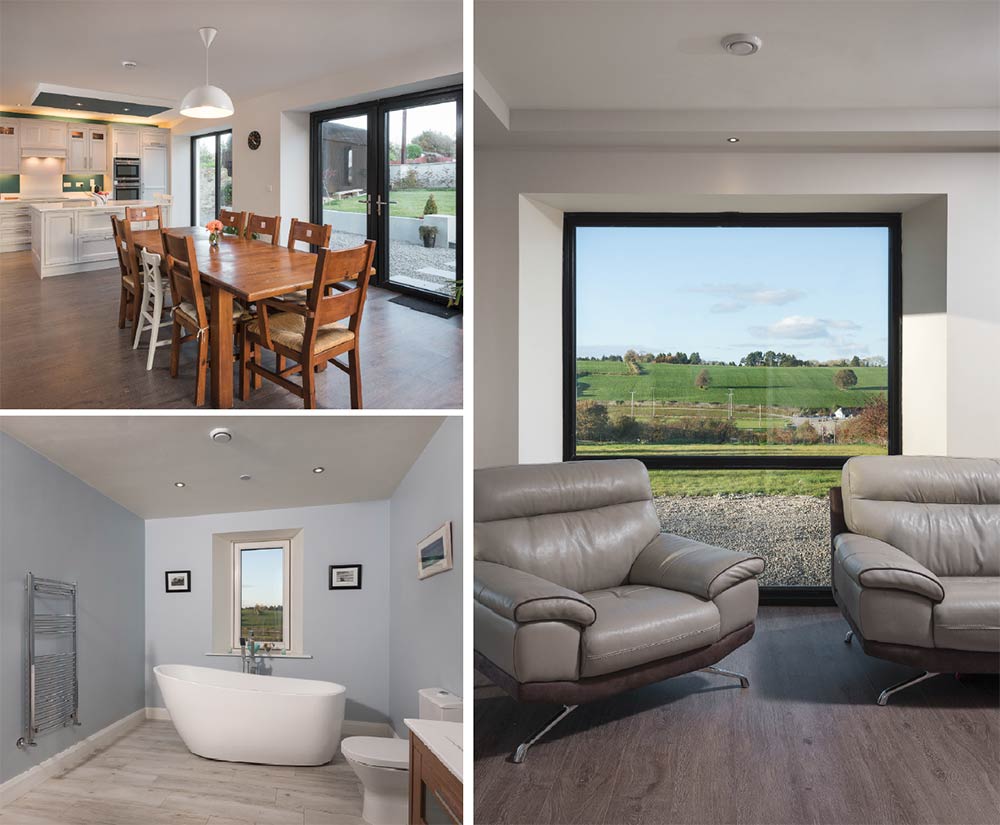 The house also scored a BER of 38.5 kWh/ m2/yr – slap bang in the middle of the A2 band. That also meant it surpasses the targets of the Irish government’s proposed national definition for nearly zero energy buildings (NZEBs) set to come into building regulations for new homes this year under the EU Energy Performance of Buildings Directive. The house hit an energy performance coefficient (EPC) of 0.29, meaning it needs just 29% of the energy of the same house design if built to 2005 minimum standards.

The family moved in to the house in February 2015 and are delighted with how comfortable – and cheap to run – their new home is. Total running costs for the twelve months to March of 2016, for a family of two adults and three children, came to €326 for heating and hot water. The total electricity bill over that same period was €1,244.

“We had a quote from a builder for €265,400 to finish to a very high spec,” says Fleming, “but it was outside our budget so we decided to go the self-build route and ended up going passive and finishing the house for roughly the same money.”

“But you do have to throw yourself into it,” he adds. “You kind of put life on hold.”