Despite some setbacks, this passive house in Roscommon managed to meet the passive house standard for fairly standard costs — all while emphasising natural materials like untreated timber, cellulose and sheep’s wool.

Art Timmins had been thinking about changing his living space for years, and had explored a range of refurbishment possibilities before deciding to start again with a new-build passive house. “We were living on the side of a mountain in a 150-year old three-room cottage with an extension,” he says, “I’m after going from one extreme to the other.”

He moved into his new passive house in March, so he hasn’t yet had a full heating season to compare old with new. The old cottage, however, was swallowing €3,500 worth of heating oil every year, so at the very least, the savings should be dramatic. Art had known Roman Szypura of Clíoma House from an insulation project Roman had carried out for Art years before. Because that experience had been so positive, Art approached Roman when he needed to build a new house from scratch. 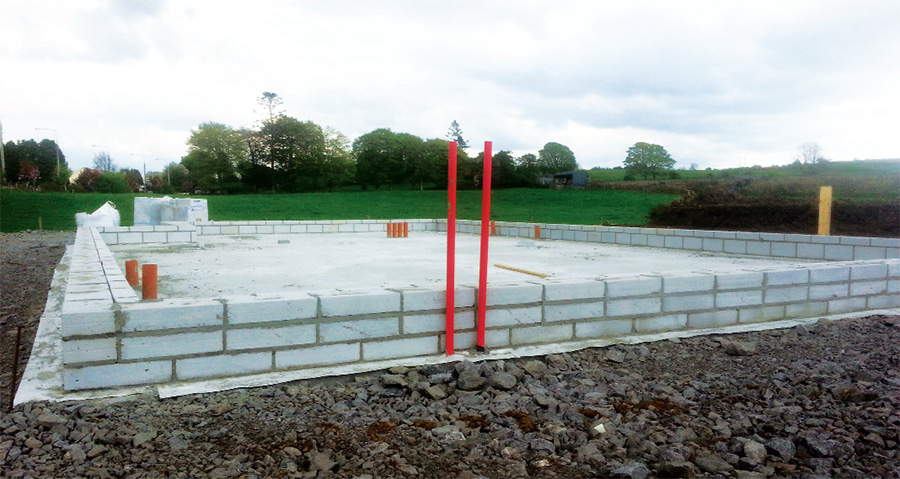 “He had a really tight budget,” Roman explains, “so he got into contact with me and asked if it would be possible to build a passive house for €200,000. This was a 218 square metre house – so 200K is a tight budget. But I said it could be done.” 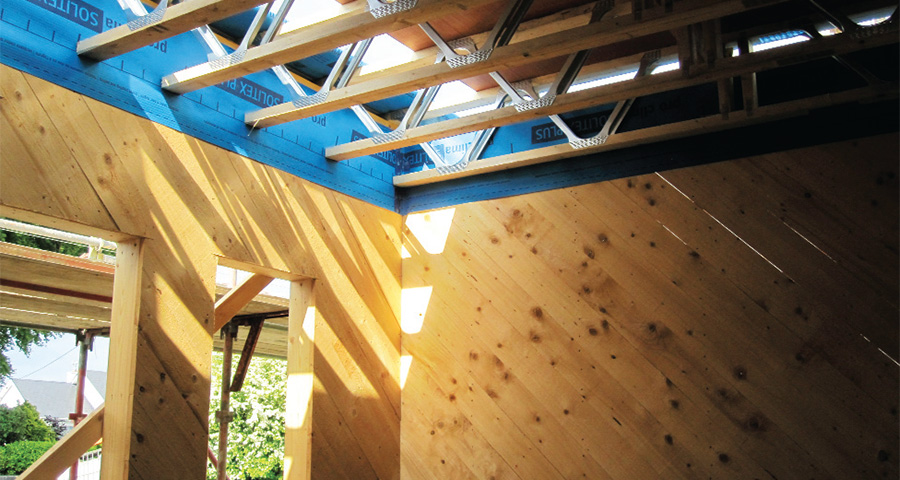 Keeping within that budget then became the central challenge of the build. At first glance, the site that Art had chosen appeared to be almost perfect, with a full, unobstructed southern aspect at the back. Even better, the architect Art used to provide planning drawings had delivered a layout and a glazing plan that worked perfectly, even though permission had been sought before the decision to go passive. 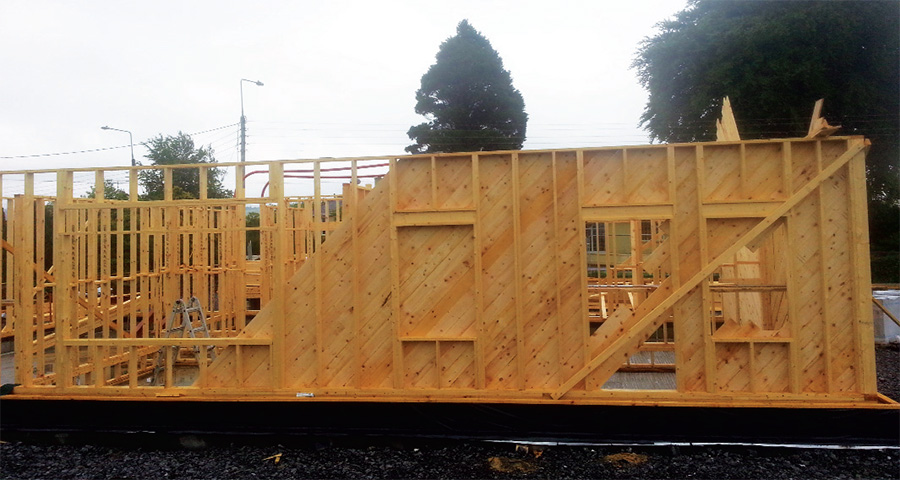 “The house is basically rectangular with the long side facing north to the road and south to the back, so it’s perfectly lined up,” says Roman. “The main living areas and most of the glazing was on the south, with bedroom, bathroom and utility to the north.” Because the orientation and layout were so good, and the house itself had a simple, compact footprint, going from conventional to passive design was relatively straightforward.

That, however, was where the good news ended. It turned out that the site needed extensive groundworks, and had to be raised by nearly three feet. This unforeseen eventuality blew a hole in the budget. As the project progressed, an unusual pattern began to emerge. Because Roman had so much experience at passive building, the typical passive house challenges hardly cost him a second thought. 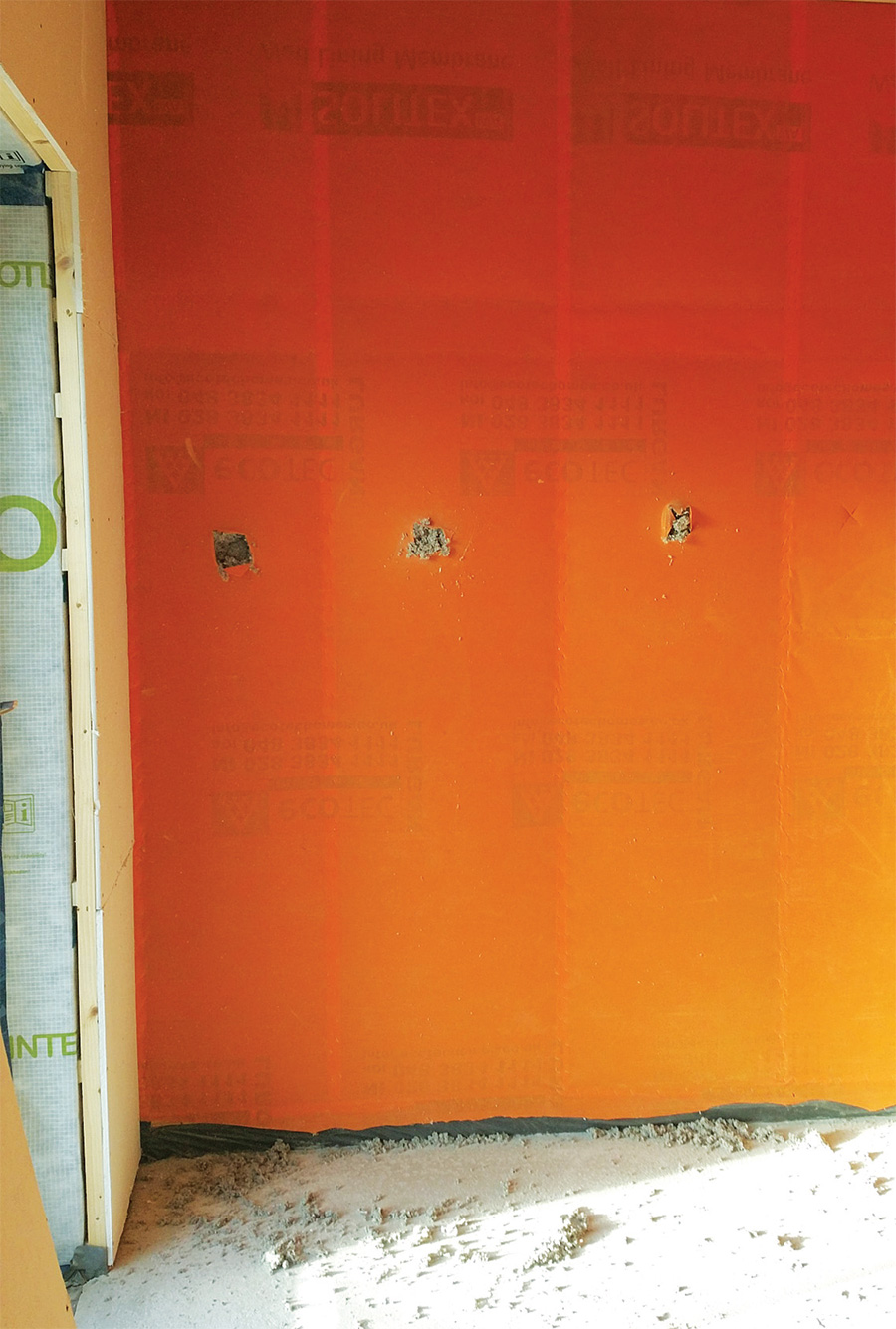 Take airtightness. The house achieved a rating of 0.23 ACH at 50 Pa, an exceptional result that exceeds the passive house standard of 0.6 ACH by a very generous margin. Roman’s main expertise is airtightness, and during this stage of the project, he used his own team of installers, all of whom were passive house certified tradespeople. “My main guy Gary Waters has been with me now for four years and is absolutely second to none as an airtightness installer,” Roman says. “He’s as good as me, only faster. That’s why airtightness wasn’t really a challenge.”

The same goes for cold bridges. “We chose a build-up that is relatively simple,” says Roman, “and that naturally has no cold bridges. To be honest I wasn’t scratching my head for even ten minutes about it.” 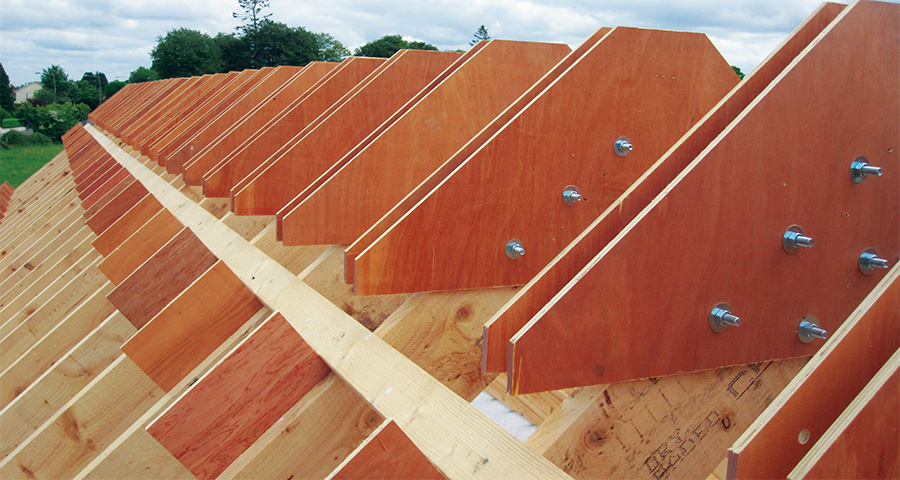 By contrast, it was the conventional stuff that ended up causing problems. In addition to the need to raise the site, a retaining wall was required around the perimeter. There were also headaches in relation to connecting the house with mains services and opening up the site to the road, together with a range of scheduling issues that had nothing to do with the passive spec. 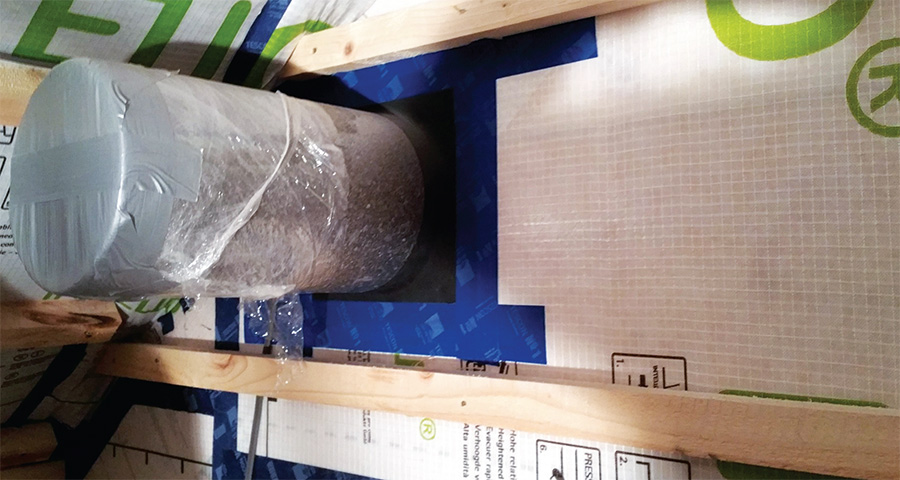 Airtightness detailing including gromit around ductwork 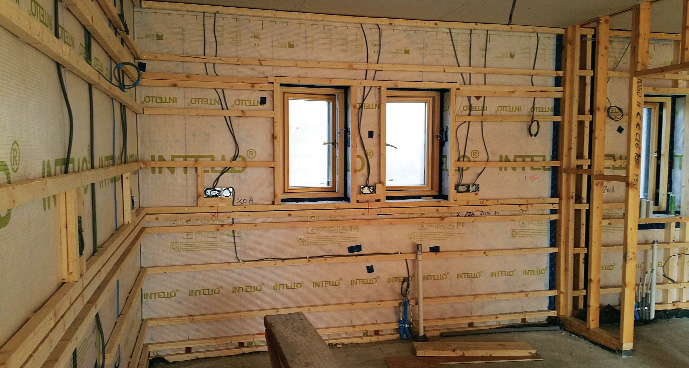 A battened service cavity inside the airtight layer 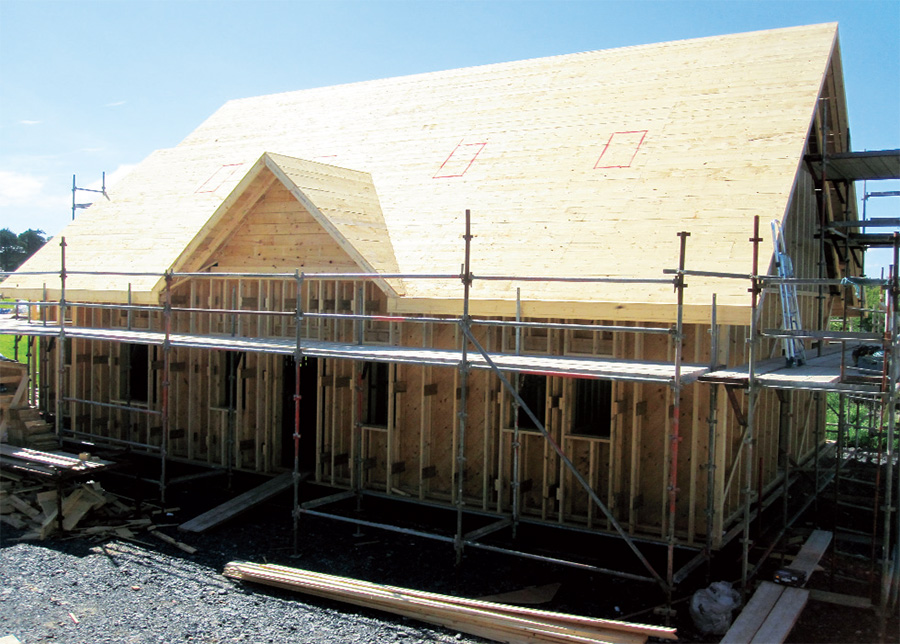 “Meeting the passive house standard wasn’t a challenge at all,” Roman explains. “That was almost the smallest part. The big problems were the things I wasn’t really used to... There was a lot of frustration around lining up contractors, around the wrong materials being delivered or else not being delivered on time.”

Similarly, the team was able to deliver passive house materials and techniques within the budget, but it was the ancillary issues that drove costs higher — despite the fact that Roman went to great lengths to ensure the quality of those materials. 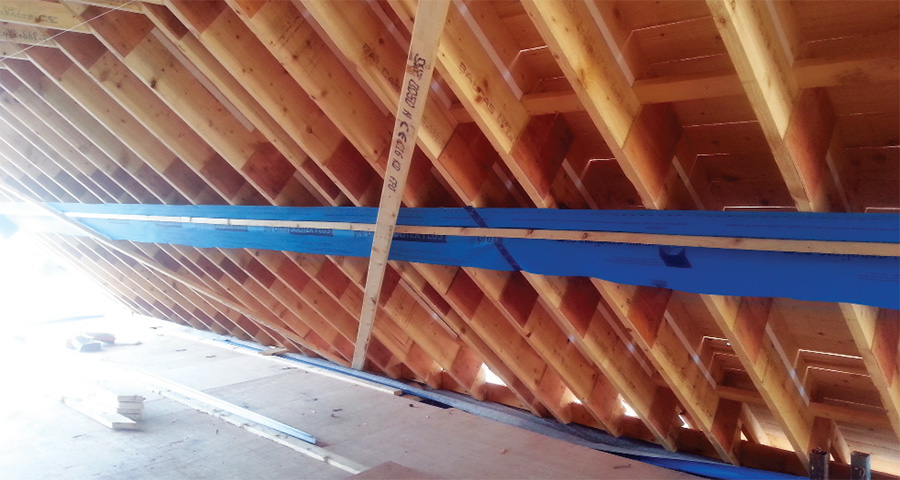 “We were eager to use as few glues and toxins as possible,” says Roman, “and create a healthy living environment by using as much natural timber as possible.”

Roman is keen to emphasise one innovation which he and his team implemented on the build. The initial plan had included a truss roof, but shortly before work began, he realised that this approach would require huge amounts of additional airtightness work – upwards of 900 individual seals. 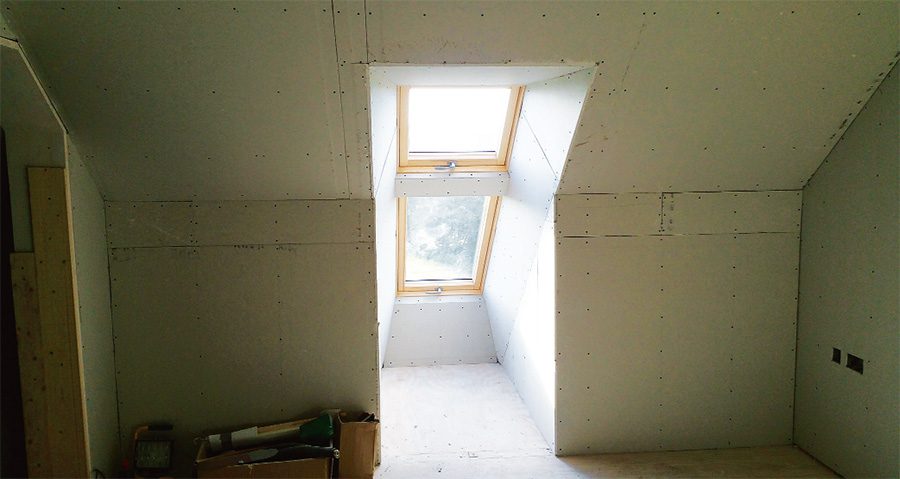 “Instead, we invented a new way of building a traditional cut roof that allows you to preinstall the airtightness membrane around the ceiling joists.” It’s a solution, Roman believes, that would make it much easier for builders to achieve passive airtightness results with traditional style roofs. “It’s one of the things I was most excited about on the build. We found a really smart solution there.”

In the end the house itself ended up costing about €215,000, excluding the groundworks and site works. Still, this put the price of the house itself at about €91 per square foot well within conventional boundaries. 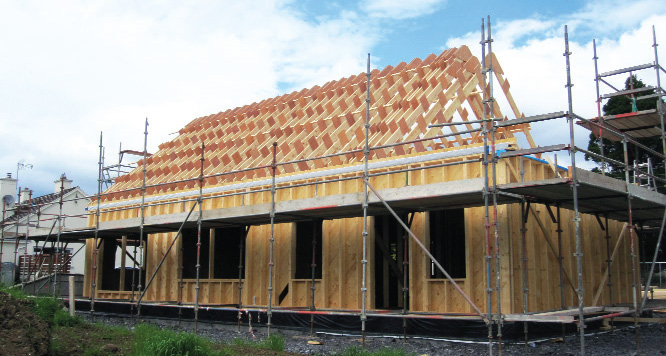 The roof begins to take shape

Art Timmins is very positive about the whole experience. He says when you’re looking for someone to build your house, they have to fulfil two – and only two — conditions. “The key really is that you need someone who knows what they’re doing and you need to be able to trust them. That was Roman. He knew what he was about and he was totally trustworthy.” 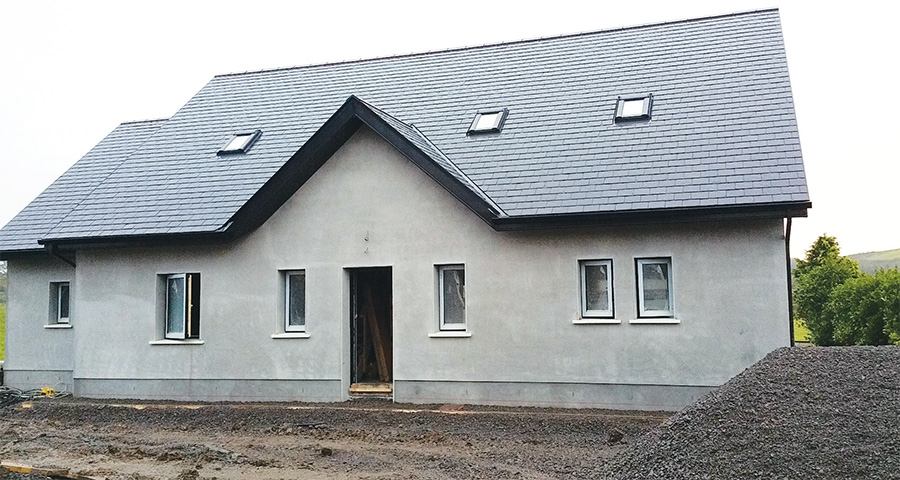 The house is rendered externally with a Nap plaster finish

Windows: Munster Joinery passive house certified EcoClad timber-aluclad triple-glazed windows with argon filling and a U-value of 0.7 W/m2K for the glazing, and overall U-values of between 0.99
W/m²K and 0.79 W/m2K installed (including frames).