Life in an air-heated passive house - Five years on

Homeowner Brendan Murphy started self-building his Cork passive house way back in 2010, long before the standard was trendy, and even chose to completely forgo a water-based heating system. So what did he learn from the experience — and how has the house been performing since?

Where would we be without early adopters? Five years ago, it’s fair to say the passive house standard was not that well known in Ireland, which meant that anyone who consciously chose the standard had to get to grips with stringent new building principles about which little advice was available.

But although Brendan Murphy’s house in Macroom, Co Cork is a new build, he initially embraced passive house principles as part of a plan to deep retrofit a 1950s house that had been in his family for generations. It was only after serious structural issues arose with this house that the family decided to knock it down in favour of a new-build.

The way he tells it, the passive house approach naturally came to the fore in his search for the most energy efficient way to build. Although he admits to not always being interested in energy efficiency, a long recovery from a serious illness gave him the opportunity to read up on issues around global warming, which in turn led him to weigh up low energy building methodologies.

“That’s pretty much where the passive house thing seemed to come from, because it seemed to be pretty much tried and trusted,” he said. Even to someone with no background in construction — Murphy is a vet from a farming family — passive house just seemed the logical thing to do.

Ultimately it was the verifiability of the then little-known standard that made it such a natural choice, particularly in comparison to Ireland’s national building energy assessment methodology, Deap. 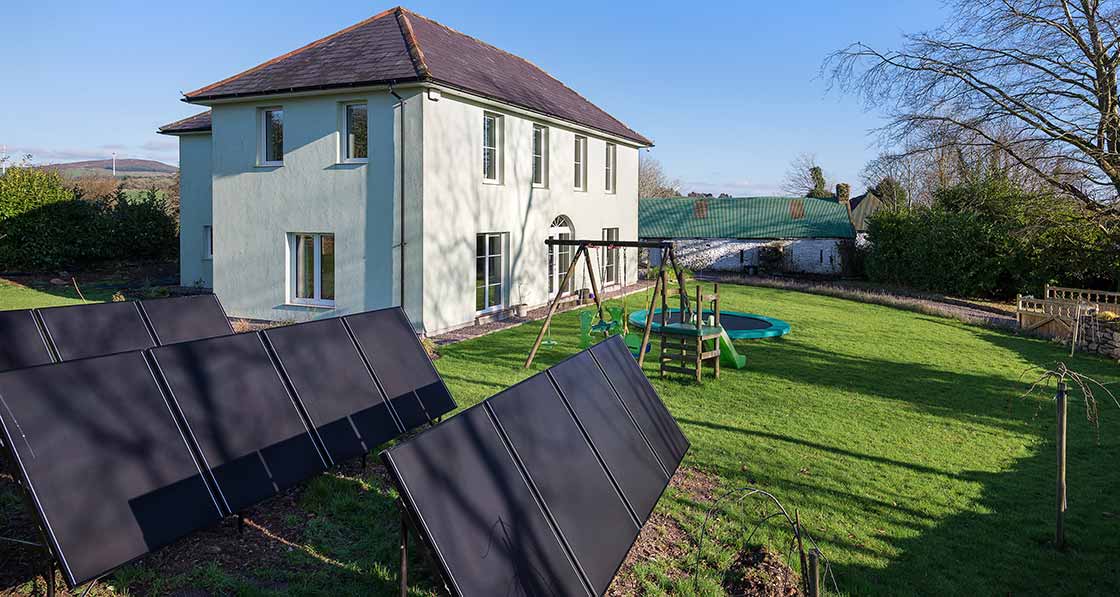 This article was originally published in issue 21 of Passive House Plus magazine. Want immediate access to all back issues and exclusive extra content? Click here to subscribe for as little as €10, or click here to receive the next issue free of charge

Murphy approached passive house specialist John Morehead of Wain Morehead Architects to see what could be done with the old house. With the help of localised weather data, Morehead’s calculations confirmed that it was possible to reach the passive house standard.

“I didn’t feel I was taking a huge risk for two reasons. Firstly, I had complete faith in the PHPP [passive house] software as it was at the time working all over the world, and even if you didn’t achieve it fully the deficit could easily be made up with a small heat source like an electric heater.”

“Secondly I was self-building in the literal sense so I knew that I could keep a really close watch on building quality, for airtightness especially.”

However, when work started on the old house, some structural defects were discovered which would have been difficult to remedy, prompting the difficult decision to knock the house down and do a new build instead.

Murphy says: ”The original building was rectangular and there was this kind of serious crack where they had put in a sort of a shore drain, and I think it has been leaking over a period of time.”

The discovery of another crack running from the ground floor right up to the roof was the final straw. “All our window openings were going to have to be changed as well, and then you had to factor in the fact there was really no foundation in the old house or damp course or anything like that.”

Murphy took advantage of the time off work to be the project manager and worked closely with a general builder from Lithuania who, luckily enough, proved to be a stickler for detail.

“I kind of had the theory in my head but he had the wherewithal to put it into practice, and between the two of us we were pretty much on top of everything.”

At the time, of course, there wasn’t a whole lot of local expertise to tap into. Murphy couldn’t afford to hire John Morehead again to work on a full design for the new build, but his previous input on the original house, while brief, would prove to have a major bearing on the new project.

For the roof, Murphy was able to work off the roof specifications of the Denby Dale passive house in West Yorkshire in England, which was built by Green Building Store, while other details and advice was extracted from a book on best practice passive house design. 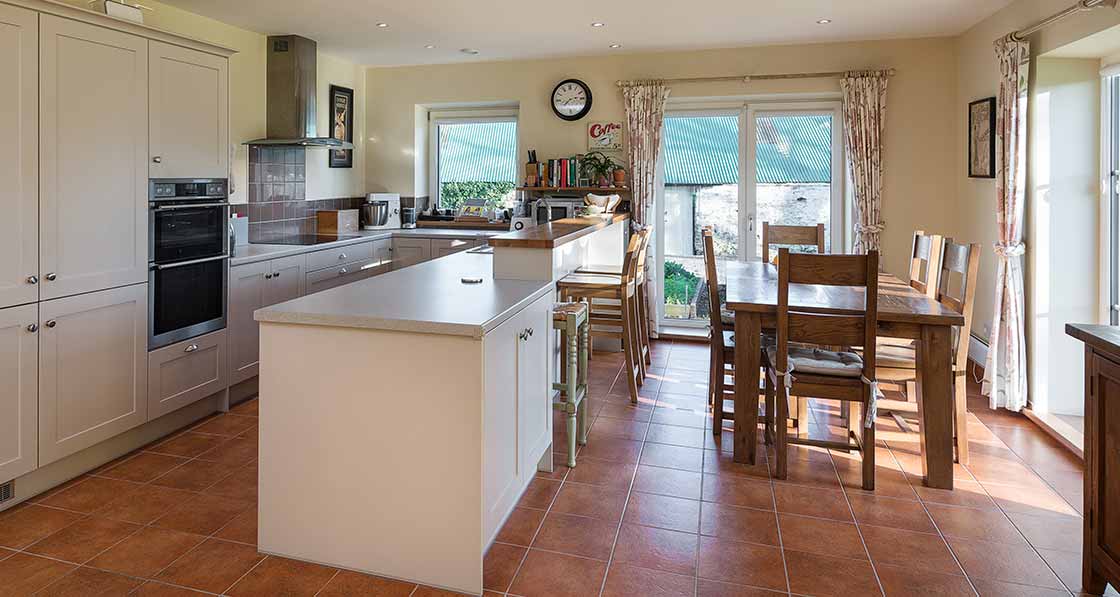 There wasn’t as much to go on in terms of the foundations, however. “You just kind of had to design it yourself and go your own way,” he says. Ultimately the team based the foundation on the Swedish Supergrund system, with a tray of polystyrene enclosing the concrete slab.

Maurice Falvey of Nilan Ireland was tasked with the heating and ventilation duties, and Murphy recalls being one of Falvey’s earliest customers. The Nilan Compact P heating-and-ventilation unit, now a common appliance in Irish passive house houses, was fitted along with back-up from a 2kW ducting heater (which Murphy says he hasn’t needed to use yet).

“We did put in some insulated pipes from outside, so we could have put in an outside heater boiler of some description and retrofit a few radiators if we had to later, but we never did have to, thankfully. We just kind of took a chance that we would get it right and it worked out good enough really,” Murphy says. The house has no radiators and no underfloor heating — just the Compact P delivering heat through incoming fresh air. 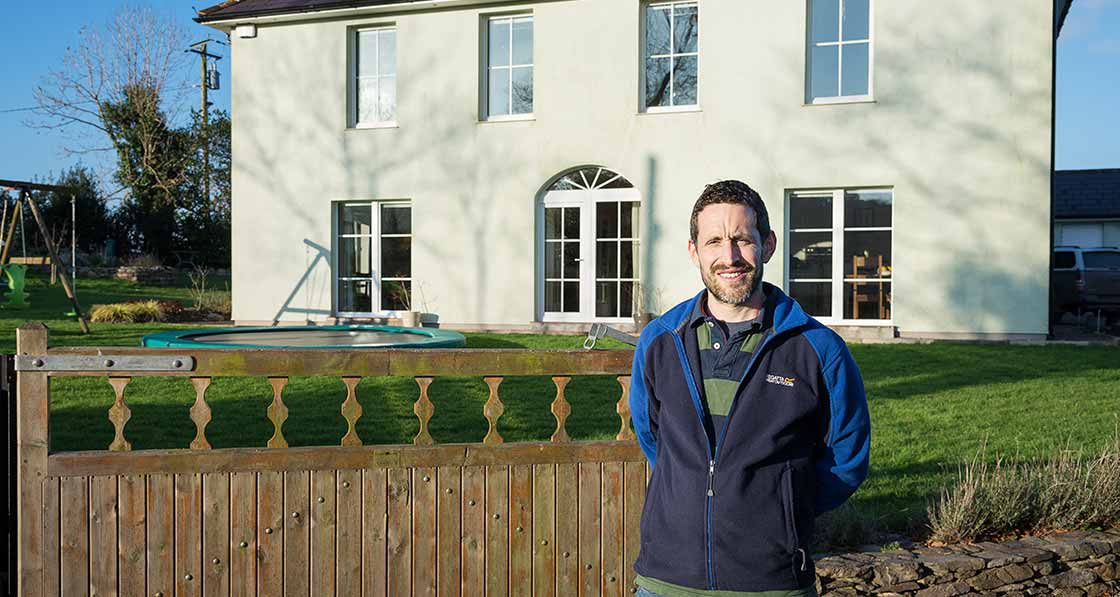 The vent for the MHVR comes out of the old fireplace, one of a number of items recycled from the original house, along with the roof slates, timber and the rubble wall (for site filler). Only the old PVC windows were thrown out in favour of triple glazed replacements from Amberline. 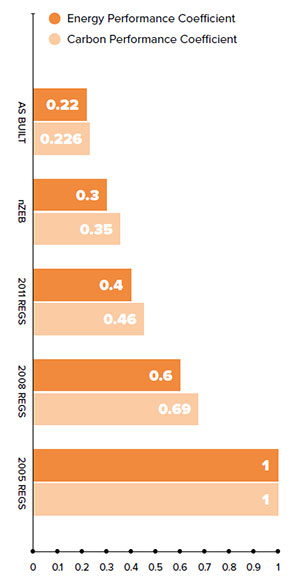 Aside from a T-shaped section at the back, the new house is built on the same footprint as the old family house and the aim was to recreate its style as far as possible. “The extension on the back is new, but the original house as you look at it is the same house basically, just different window openings, because the windows in the original house were quite a bit smaller.”

This additional section had to be built to the rear as the south-facing front of the house is quite close to the road, so this part of the house doesn’t benefit as much from solar gain. If he were starting again, is there anything Murphy would have specified differently, given advances in building technologies and expertise?

Murphy had the option of having a wide 300mm cavity wall, but he decided against it. He says: “They were talking about putting in a 300mm cavity and pumping beaded insulation into that cavity, but my biggest concern with that really was the fact that you were relying on the installer to do this, and you know there could be gaps in your insulation and stuff like that which could be pretty critical to the success of the thing. But they have sort of improved on that. Although it’s inherently more complex, it’s pretty doable nowadays I’d say.”

He could also have opted at the time for a timber frame structure rather than a block-built one, but given the direct labour/DIY approach, it didn’t really suit.

So the burning question is, with the benefit of over five years experience living in this house, what does he think?

Murphy says: “It has matched our expectations and probably exceeded them in a lot of ways. We are close to a byroad and soundproofing is really good. The constant temperature is really something as it’s never cold getting up in the middle of the night with small children, or in the morning first thing.” The even temperatures also mean that drying clothes rapidly is easy all year round, aided by a drying tower designed by Morehead, which is basically a winch-up, winch-down rack that dries wet clothes at the top of a vertical space that extends over two storeys.

Murphy also enjoys the brightness from the large windows, which makes the inside of the house feel more in touch with the outdoors. “You do have to work with the building in some ways, such as closing curtains when the sun goes down ideally, and pulling blinds on really hot summer days, but that’s not too often though,” he says.

In the first year the house was still drying out, so it wasn’t until the second and third year that they felt the full performance.

“It depends on the weather outside too to some degree, you know,” Murphy explains.

Energy bills: Approximately €1,100 per year for electricity (there is no other form of heating or energy supply). Brendan Murphy estimates roughly €350 of this is for heating & hot water. Recently installed solar PV should reduce overall electricity bill by c. €300 per year.