This house on the coast of County Waterford is built from an insulated concrete formwork shell that delivers an inherently warm and airtight construction, and easily exceeds passive house targets.

The sequence of houses in which John Carney has lived over the last thirty-five years, neatly encapsulates how house building has progressed over that time. He’s gone from a two-room cottage to a passive standard two-storey, by way of a 1990s low-energy house.

“The cottage had no running water,” says Carney, “two light-bulbs and one power point…I added a bathroom and a bedroom, and put in a septic tank, but then in 1990 we decided to build a new low-energy house and moved in around the time Mary Robinson got elected. We lived there for 25 years, and the house functioned very well, but as I became more aware of passive house, airtightness and all these things, it was almost as if I could feel the breeze more in the house.” 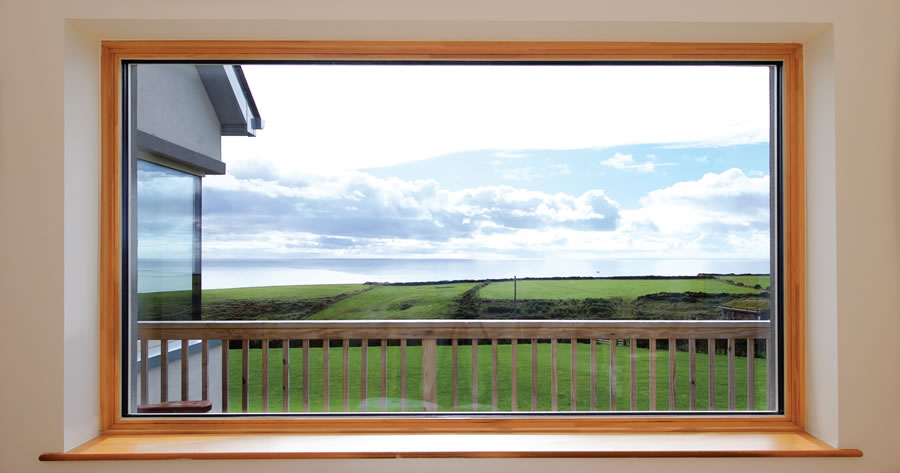 A quantity surveyor by profession, Carney lectures in construction management and engineering at Waterford Institute of Technology. In addition, he continues to work in the construction industry, preparing tenders for contractors and looking after the financial administration of projects. His career-long interest in sustainability brought him to conferences all over Ireland and Europe, keeping abreast of developments and making sure his students were aware of what was happening at the cutting edge of construction. He also had one eye on the day when he would put all he had learned into practice, and build his own passive house. He says: “I always thought if I was going to build, it would be great to do something like that.”

The house, which overlooks the Atlantic on the Waterford coast, has the appearance of a cottage from the front, but is in fact an inverted twostorey house. The living areas are located on the first floor with the bedrooms on the lower floor, which slots neatly into the sloping site. Carney was inspired to reduce the size of the house by a piece in this magazine by Irish Green Building Council director Pat Barry which queried whether a large passive house could be considered sustainable. 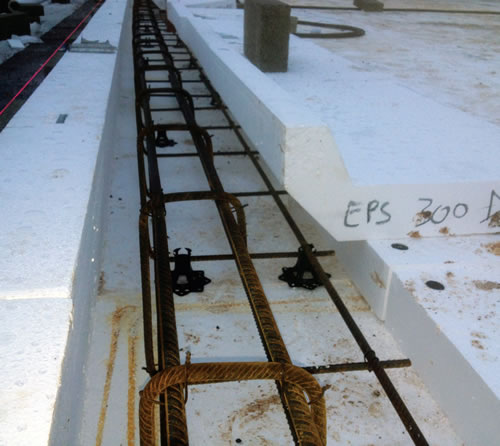 Jeff O’Toole of Passive House Solutions is a specialist in low energy building and design, and a former pupil of Carney’s. Retained as a consultant on the build, one of his first jobs was to take the architect’s design and adapt it to passive house specifications.

“The original design was a bigger house with a lot of tricky detail on it,” he says. “There was going to be a carport on the lower ground floor, and a garage, but once I started looking at it, I realised there were loads of areas where it was going to be difficult to get thermal bridgefree construction or achieve the airtightness.” 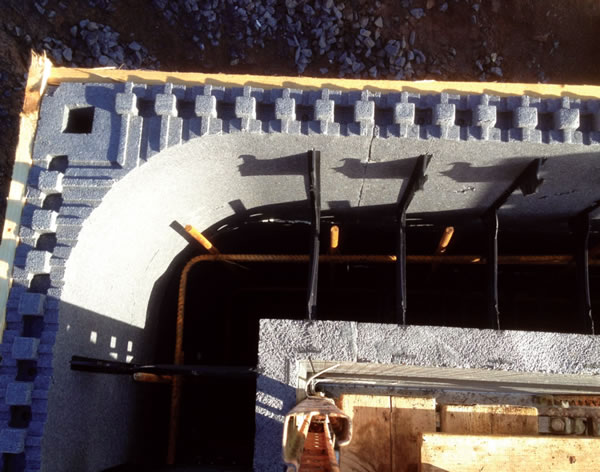 Neopor graphite EPS forms the inner and outer layers of the ICF walls, with concrete then poured in between

This wasn’t a complete redesign, he’s keen to point out. The architect’s basic orientation and layout largely conformed to passive principles. O’Toole simplified things, putting the design through the passive house design package PHPP in order to ensure that the building fabric delivered, and to help make the house more buildable.

Carney and O’Toole spent a lot of time assessing the various building methods before settling on insulated concrete formwork, or ICF.

“ICF came into its own on the site,” says O’Toole. “Because it was split level, it had to have a retaining wall along the back, and if it was going to be any other construction type, timber frame or block wall, a concrete retaining wall would have had to go in there. Instead, John found a way of using the ICF wall as his retaining wall as well as the primary structure for his house.”

The ICF system was designed and built in Naas by Amvic Ireland. Pat Martin of Amvic says that one of the key advantages of ICF is that its advertised U-values are intrinsic to the system. “We can’t take short-cuts like not fitting insulation properly, nor can we mess with the quality of the product by not having the correct densities or properly filled moulds, otherwise the concrete would blow it apart. So once the wall is standing, it will perform.” 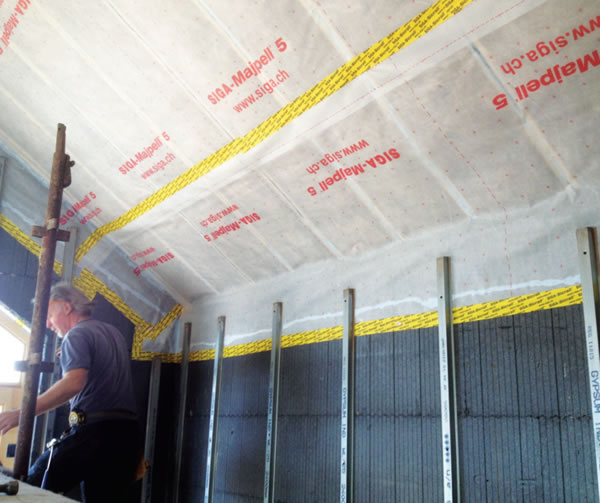 Siga Majpell membrane in the roof for airtightness

The standard system delivers a U value of 0.22. To get that down to the required U-value for this particular passive house of 0.15, an additional layer of insulation was added to the outside of the structure. “We used our own moulded 100mm [EPS] panel with stepped sides,” says Martin, “which means it overlaps to all its neighbours on all four sides so there’s no risk of cold bridging; they all fit perfectly against each other on the wall.”

Jeff O’Toole says that the system was “a dream” to work with. “The consistency of the insulation is the thing. It was completely continuous, plus it was very easy to add an extra layer of insulation onto the outside of it to get the U-values down.” ICF came with one other key advantage. Because of the density of the concrete mix used, the wall was naturally airtight. The blower door test result, at 0.31 air changes per hour, lies well inside the passive threshold.

All internal partitions are blockwork, in part to support the precast concrete floor slabs and in part to provide thermal mass. At foundation level, the ICF ties in with the insulated foundations, removing any thermal bridging issues here.

John Carney decided not to seek passive house certification, though the house operates well inside all of the passive targets. According to Deap, the house gets an A3 rating, and complies with everything but the minimum renewable energy contribution of 10kWh/m2/yr. (This figure is taken from the technical guidance document associated with Part L of the Irish building regs rather than the regulation itself, which only states that a “reasonable proportion” of a dwelling’s energy demand be met by renewables. Thus there is a strong case that a passive house can produce less than 10kWh/m2/yr and still comply with the law, on the proviso that a “reasonable proportion” is being generated. 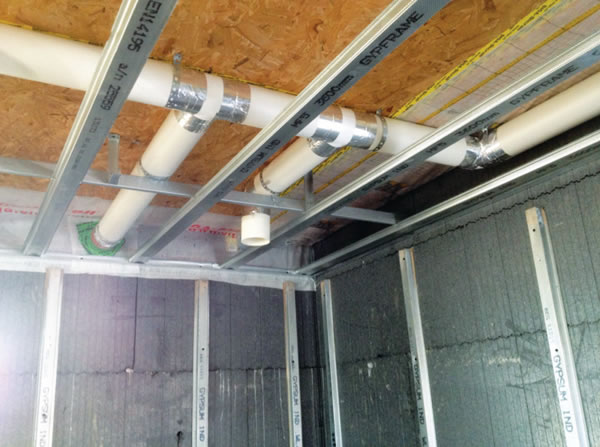 Jeff O’Toole says: “John put in a 300 litre cylinder with Kingspan [solar thermal] tubes on the roof, which came in a 8kW/m2/yr, which is more than enough hot water for what John needs. There are only two people living in the house, so to meet the renewable requirement [in the technical guidance to Part L], they would have had to over-specify the solar thermal.”

John Carney has been monitoring his new passive house, but also the houses in which he lived previously — both of which he still owns. “The cottage is goose pimple-cold, especially when there’s no heat on. The temperature gets down to 7C inside in the house. The middle house, the one built in 1990, is around 12C and the passive house is about 17C, and that’s over a period of time when all the houses were unoccupied and unheated.”

Carney also kept close tabs on the budget throughout the project, which ran from October 2012 to November 2013. Total spend per square metre was €1,225 inclusive of Vat, and that includes everything, from local authority contributions to the tarmac driveway, entrance gates, dry-stone walls, landscaping, rainwater harvesting and the sewerage treatment facility. 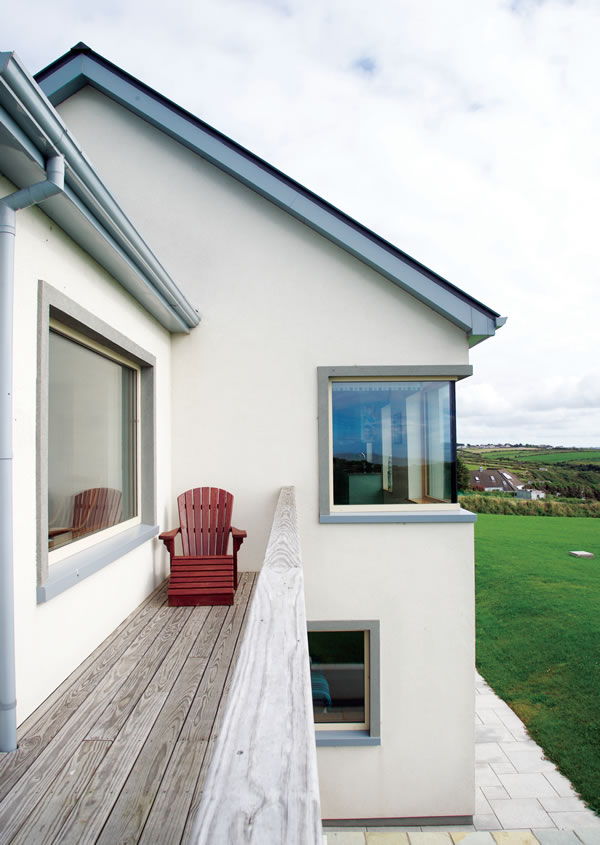 “The house itself was a wonderful experiment,” says John Carney. “Someone said to me, it was an expensive experiment but it wasn’t expensive, it was a very worthwhile exercise. I had the site, I had the planning permission, I had the water supply right onsite, I had a little bit of expertise in construction, and I got tremendous mileage out of it from a teaching point of view.” 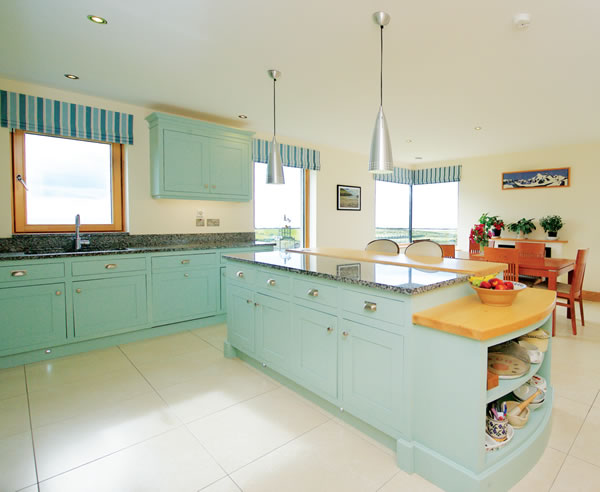