Passive office cuts bills by £25k and absenteeism by 13 percent

Anyone who thinks the passive house standard isn’t relevant to non-domestic buildings is missing a trick. One certified passive office in Leicester reveals the significant benefits companies can yield in terms of saving energy, increasing productivity and improving the bottom line.

Passive house architects and contractors sometimes joke they spend all their time constructing low energy buildings — while they go on living and working in cold, damp, leaky structures.

One big contractor, Interserve, hadn’t built to the passive house standard before — but when it came time for its Leicester base to move homes, it realised the time was right to build a more comfortable office space. 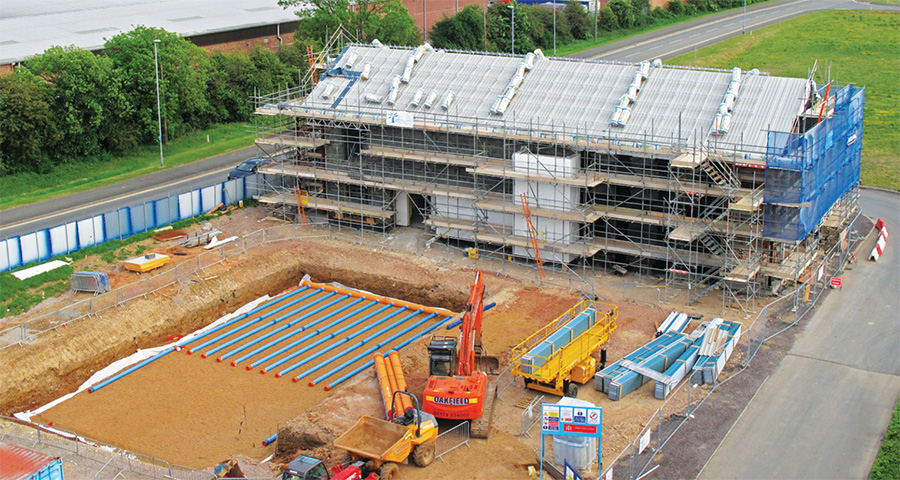 The building’s pitched roof was insulated with 340mm of Earthwool FactoryClad rolls, giving a U-value of 0.14.

The branch had been working from an old dormitory block originally built for National Service personnel. “It was a horribly inefficient building,” says John Walkerdine, Interserve’s business development manager.

The rent was cheap, but staff needed to run a big gas boiler around-the-clock just to provide hot water, so the heating bill was a whopping £23,000 a year. It was time to move.

Interserve started making plans to build a new Leicester office. Raynsway Properties agreed to develop the new building, which Interserve would then rent. The contractor’s rent was going to rise, but it realised that if its new home used less energy, its heating and electrical bills would be lower, and this would help offset the increase in rent.

Interserve originally planned to construct the building to an ambitious Breeam level. Then leading passive house architect Jonathan Hines of Architype came to speak at the company’s annual conference. 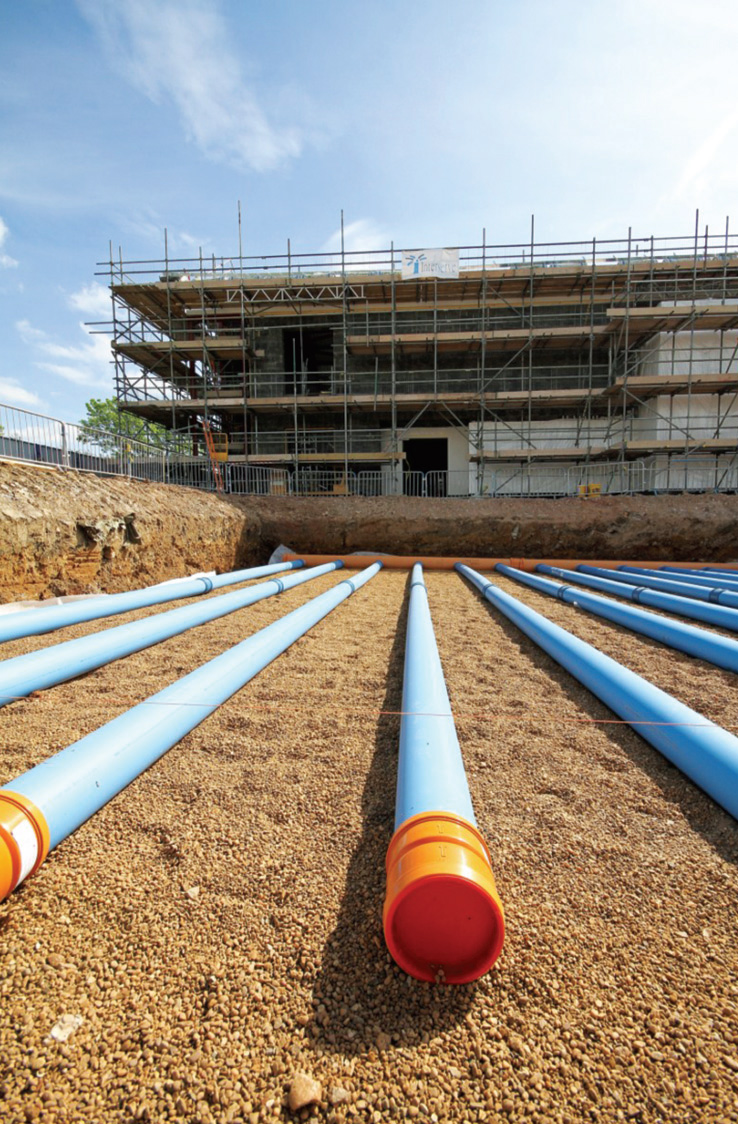 A Rehau earth tube system was installed beside the building, to assist with heating and cooling when needed

“All of a sudden it opened our eyes,” John Walkerdine says. He had heard of homes built to the passive house standard before, but not offices. Interserve was sold on a design philosophy that would focus entirely on the building fabric — and associated energy savings. And because Interserve would naturally act as contractor, the project could showcase the firm’s ability to construct an ultra low energy, airtight commercial building.

The original design had the main facades facing east and west to maximise the building’s prominence to the road, but with the new passive house goal in mind, the team beefed up the insulation and airtightness spec and turned the building so the main glazed facade would face south. 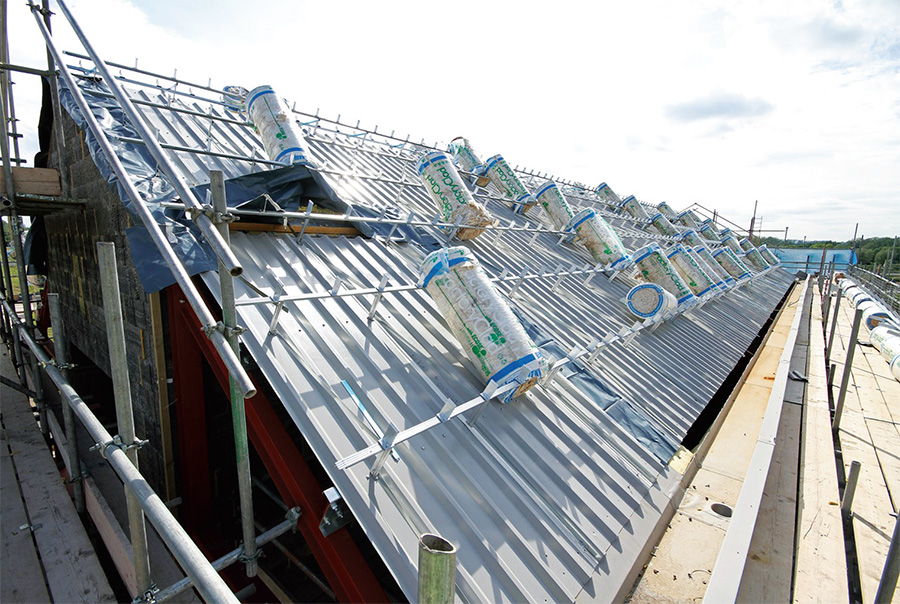 One of CPW’s main goals, which demanded laborious calculations, was working out how to maximise natural light inside — through the smart placement of glazed facades — while making sure the building’s space heating demand stayed within passive house limits.

The design complied with passive house overheating criteria, but with a lot of internal gains from staff and electrics, it failed to meet CIBSE’s overheating guidelines. At this stage the glazing design had been finalised, and met both daylighting and space heating demands. So the team decided that some form of shading was needed to combat potential overheating.

A fixed shading system would have been cheaper, says CPW’s Matthew Wrate, but wouldn’t be as flexible, and wouldn’t allow the building to warm up on sunny days when unoccupied. So Interserve instead plumped for a motorised Levelux external blind system, which has five settings, each offering a different degree of solar gain.

The blinds act as the first port of call for the heating setup. If the building management system senses that the temperature inside has dropped below 20C, an irradiance sensor checks how sunny it is outside, and if it’s bright enough, opens the blinds to let the sun in. 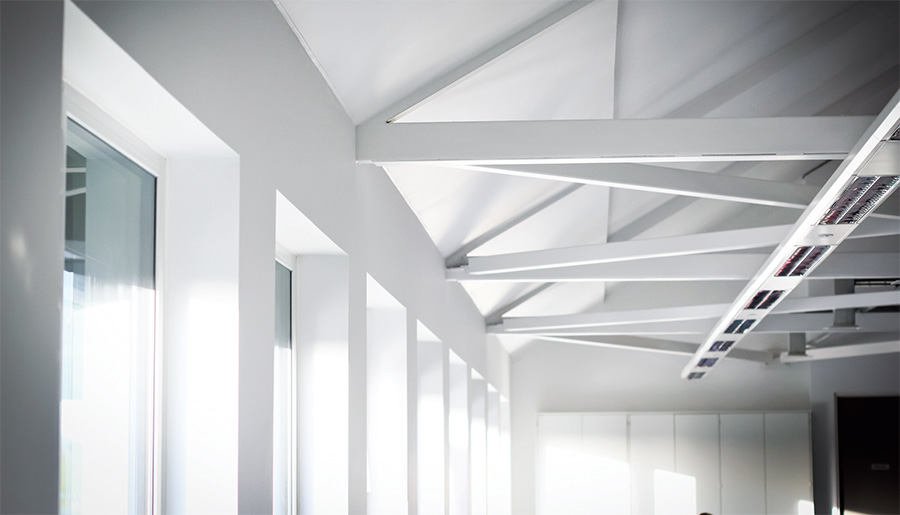 If there’s not enough sunshine, or solar gain doesn’t boost the temperature above 20C, the building’s active systems kick in. First, the BMS starts to bring fresh air for the heat recovery ventilation system through an underground Rehau Awadukt Thermo ground-air heat exchanger — also known as an “earth tube” system — before delivering it inside.

The Rehau system consists of 250 metres of pipework installed about two metres below the ground. Because the temperature down here remains relatively stable throughout the year, drawing incoming fresh air through the earth tubes preheats it in winter but cools it down in summer. On very hot or cold days this can change the temperature of incoming air by 6C or more, before it even enters the building. This also helps to smooth out internal temperatures, given that the building’s structure lacks thermal mass.

Meanwhile, the heat recovery ventilation system also extracts air from the building’s server room, cooling the room down. This allowed the team to avoid putting in a separate fan for cooling the servers here.

If pulling air through the earth tubes on cold days doesn’t get the temperature up to 20C, two 16 kW Daikin air-to-water heat pumps kick in (if the building is unoccupied, the earth tube stage is bypassed and BMS jumps straight from passive solar heating to the heat pumps). 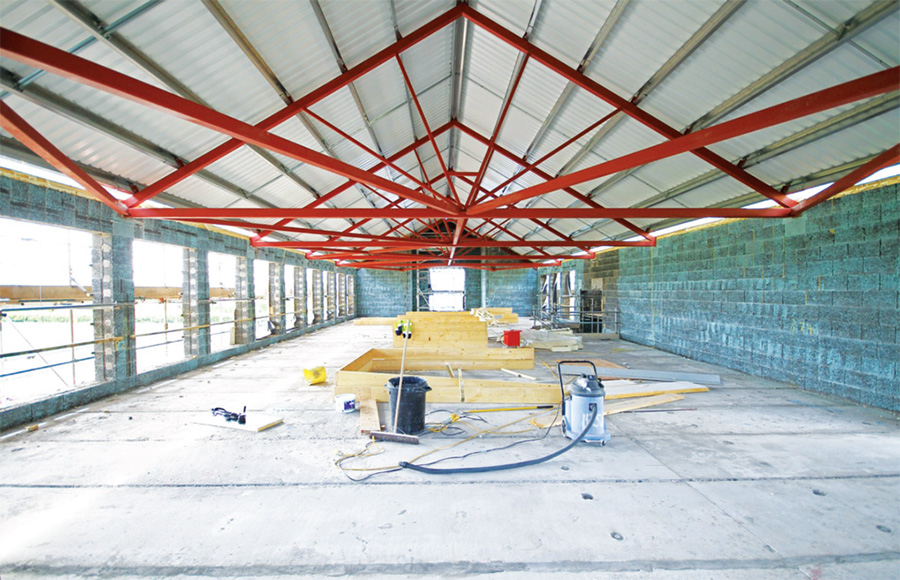 The Daikin units supply space heating through radiators — one serves the entire open-plan office floor, while others serving individual meeting rooms. Matthew Wrate says this made more sense than delivering heat through the ventilation system because the building is unoccupied about two thirds of the time, and it would be inefficient to run the whole MVHR system to heat an unoccupied building.

The building is constructed with a Durisol insulated concrete formwork system. The insulating blocks are comprised of over 90% recycled softwood — by-products of the timber industry — that’s bound with portland cement. The blocks are manufactured in the UK using harvested rainwater. Durisol say the product is lightweight and designed to be easily cut, nailed and screwed with a carpenter’s normal tools.

On site, the blocks are dry-stacked, and concrete is then poured into the vertical cavity to create structural columns. To boost the U-value of the walls to passive house levels, Interserve installed an extra 50mm of Celotex PIR insulation on the building externally. 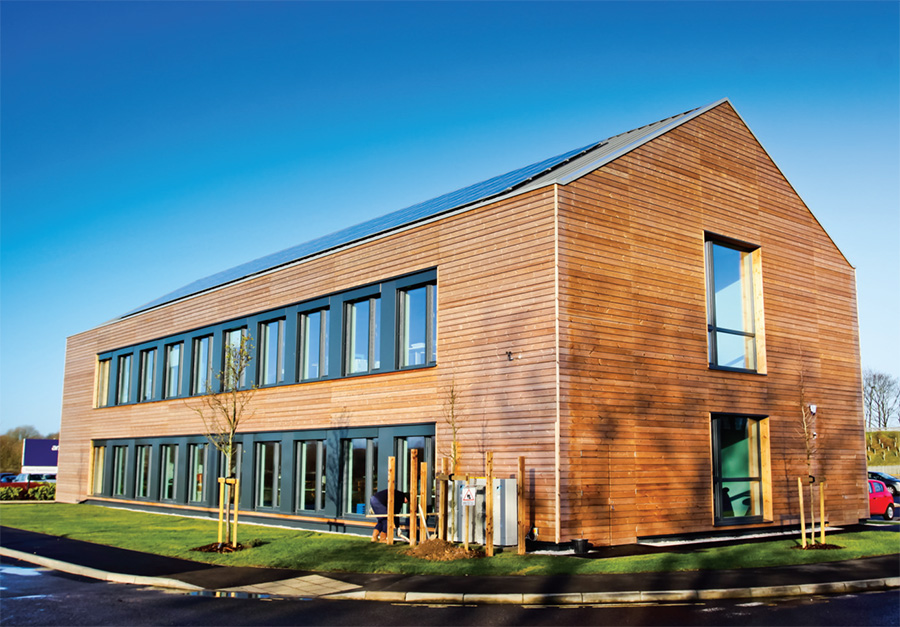 The building has two roof sections: a main pitched roof that’s insulated with 340mm of mineral wool, and a small flat plywood roof with 160mm of Celotex. The thermal bridging surrounding the guttering was overcome by an extra 100mm of Celotex insulation internally around eaves level to combat the fixing bolts that hold the gutter in place. Meanwhile the trench fill foundation is wrapped with 100mm of the same insulation.

Rehau also supplied windows and doors for the whole building — triple-glazed, krypton-filled Geneo units which are passive house certified to achieve a U-value of 0.8. The windows were manufactured using Rehau’s recyclable Rau- Fipro fibre composite material, which the company says is similar to fibre composites used in aircraft construction and Formula 1 cars.

When it came to the airtightness test, just before staff moved in, the building scored 0.44 air changes per hour. “We were brave or stupid and we didn’t have an airtightness test until the day before handover,” John says.

Away from the building fabric, CPW also helped Interserve to save energy by advising a change to the company’s printing strategy. Rather than each employee having his or her own printer as before, big centralised printers now sit in the server room.

The building is topped with an 18kW solar photovoltaic array that covers more than 120 square metres of the roof.

Interserve had bought the panels in China with the intention of selling them in the UK. But then the price of PV in the UK dropped, and putting them on the market proved less attractive. So installing some of the panels on its own roof made sense, and enabled the building to be certified as energy positive on its Energy Performance Certificate with a score of -2 (without the PV panels, the figure was 18).

It also means that the building now earns Interserve £1,430 a year for energy production — as opposed to the £23,000 it was paying for heat before. “Financially we are £25,000 a year better off on the energy costs,” John says.

He adds there has been a 13% drop in absenteeism due to reduced sick days compared to their old offices, which he attributes to improved indoor air quality. The company’s previous Leicester office relied on opening windows for ventilation, and the staff would shut the windows when the weather turned cold and leave them shut all winter, meaning no ventilation other than infiltration. With the building’s MVHR delivering frequent air changes, John says that infections are less likely to spread.

The building management system is now closely monitoring every facet of the building: internal CO2 levels, water consumption, energy use in every part of the building, ventilation and more.

Walkerdine says the company’s Leicester passive office ended up coming in at £180 per square foot, but that this could have been £165 if certain mistakes weren’t made.

But now, he says Interserve can deliver a passive house office block, built with externally insulated masonry, for £145 per square foot. This, he says, could be the difference between a developer thinking passive house is nice but expensive, and biting the bullet and aiming for the ultra low energy standard.

And he adds: “At the end of the day we’ve got a brand new super office we’re delighted with.” 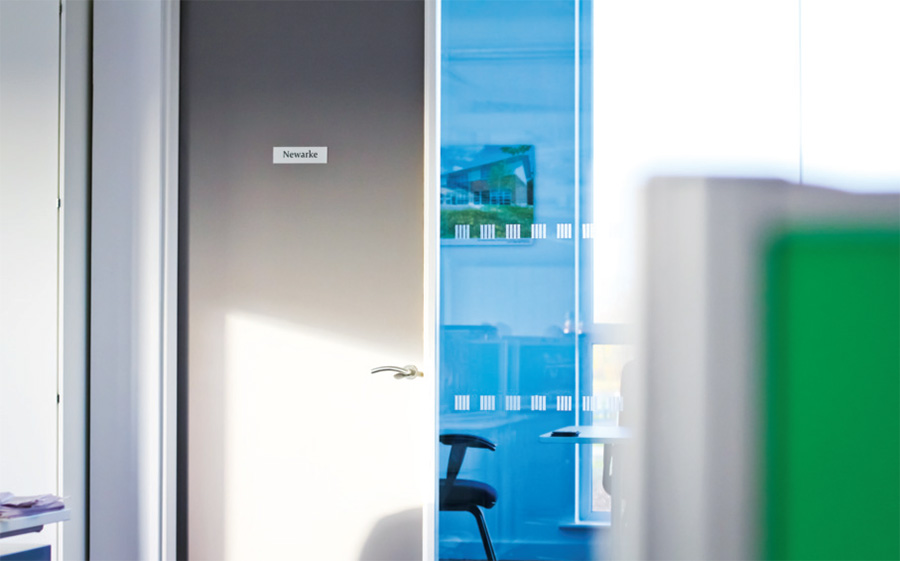 Energy bills: In 2012, the building achieved an energy credit of £1,430 due to the combination of low energy consumption and photovoltaic micro generation.