A stunning location, thoughtful design and a certified passive house: a new home in the wooded hills of the Scottish Borders manages to have its cake and eat it too.

In 2005, husband-and-wife Ian and Anne saw an ad in The Scotsman newspaper for a plot of felled land in the hills of the Scottish Borders. They visited the site and fell in love with what they saw: captivating light, wooded hills, seclusion, a view over the river Tweed.

By April the following year, they'd bought the site and hired leading green architects Gaia Group to design their home. The firm says its focus is building healthy, energy-efficient homes, and that it aims to avoid the use of heavily processed or polluting materials in its buildings.

Ian and Anne spent much of the next two years clearing the site of tree stumps, bracken, rosebay willow herb and stones. 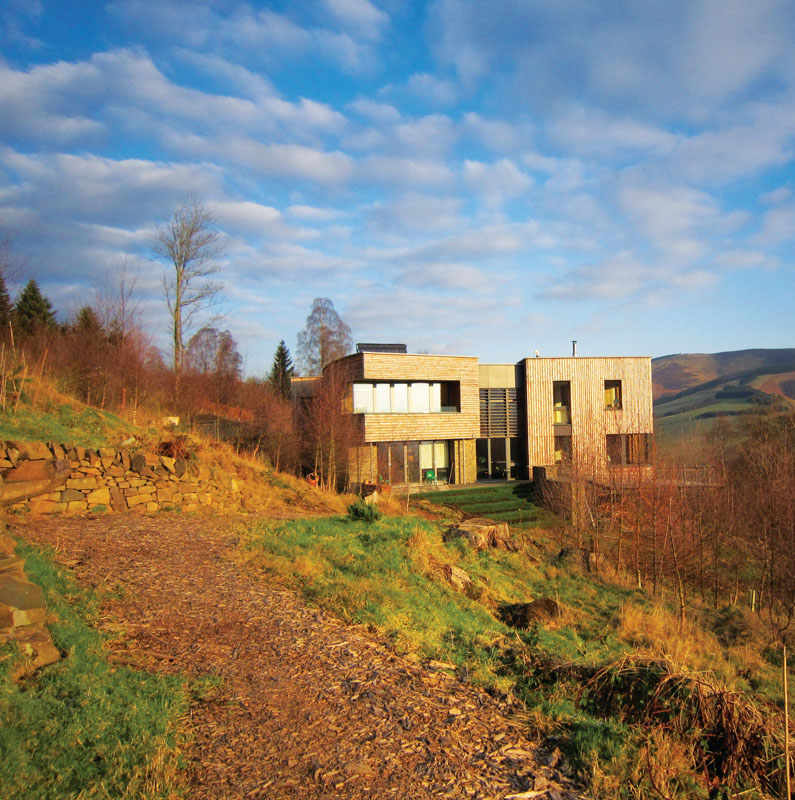 Anne jumped headfirst into the design. She had a good idea what she wanted: a timber house in a clearing on the slope, but one that would settle into the site. "Kind of hidden but yet with fantastic views," she says — something that would "have the wow factor but be understated".

But she also wanted the design to incorporate stone – a timber frame house that would rise out of the stonework.

She spent almost three years fine-tuning the design with Gaia, and the team ended up with a concept similar to the one they had started with — for Ian and Anne this just reinforced the feeling that they'd got the design spot on.

But the couple were faced with a decision: what to build the house with? For many projects that Passive House Plus features, this often comes down to a choice between block construction or timber frame. But prompted by Gaia, Ian and Anne plumped for something a little different.

Conceived by the German engineer Julius Natterer in the 1970s, brettstapel is a type of gluefree massive timber construction that has become popular in central Europe. 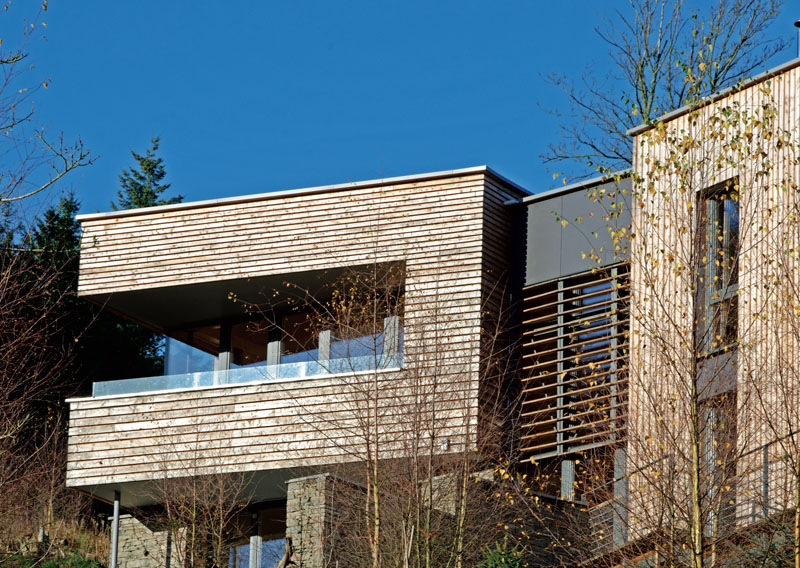 The system is composed of softwood posts that are connected with hardwood timber dowels. The dowels have a lower moisture content than the softwood posts, so over time the dowels soak up moisture to achieve an equilibrium, expanding and locking the posts together to create a load-bearing system. Brettstapel uses low grade timber that would otherwise be unsuitable for use in construction.

Gaia Group designed the UK's first brettstapel building in 2009 — Acharacle Primary School on Scotland's west coast. Brettstapel had been used in Ireland on Navan Credit Union, a pioneering, regulation-bending eco building completed in 2005 by Paul Leech: Gaia Ecotecture. As the name suggests the Irish practice are connected to Gaia Group via the loose-knit association of architects Gaia International.

But Gaia Group didn't just convince the couple to build a brettstapel house, they persuaded them to build a passive one too.

"The passive house targets were simple to achieve using the brettstapel system, which was developed within a culture where high build quality is taken really seriously — unlike in the UK," says Prof. Sandy Halliday of Gaia Group.

She says that glue-free brettstapel contributes to a healthy indoor environment and locks up carbon too. But because it's not yet manufactured in the UK, it's still expensive. 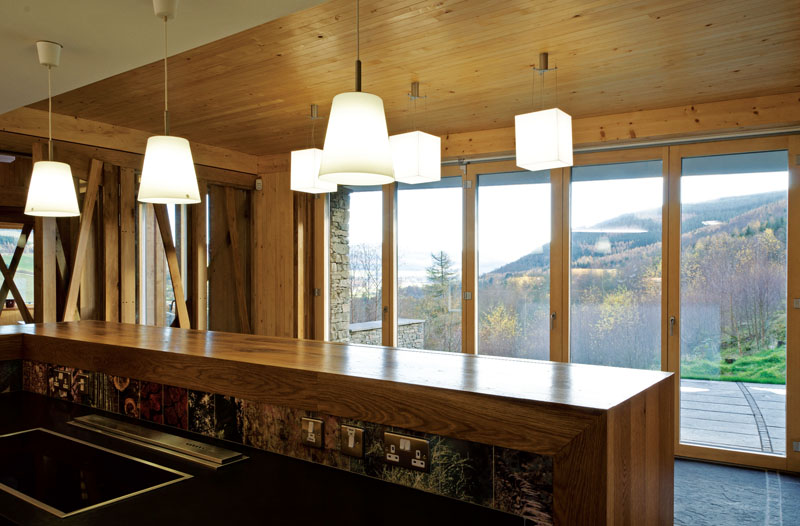 "We'd never heard of passive house or anything like that," Ian says. But Anne loved the simplicity of the concept, adding: "What I liked about the idea of a passive house was that instead of having modern ways of generating energy, it would just save energy by being well insulated."

Gaia took the couple on a tour of passive and brettstapel buildings in Austria. They continued clearing the site in 2009 and 2010, and started planting native bulbs and trees to supplement the naturally regenerating birch. Local contractor Rodger Builders laid the foundations late that summer, and in November Austrian brettstapel specialists Sohm arrived to the Scottish Borders.

But the project hit a snag: while seclusion was part of the site's appeal, getting lorries up the track to it proved tricky. When the snow arrived, one of Sohm's lorries got stuck and almost slipped into a neighbour's garden. The lorry was eventually set free, but Ian and Anne needed a new way to get the brettstapel panels to the site. Luckily the local shopkeeper stepped in, allowing the lorries to unload in his car park, from where a tractor trailer took the panels to the site.

Just six weeks later the house was up, air and water-tight, and Ian and Anne could walk around the bare rooms. The Austrian team worked throughout the snowy winter. "The Austrians were working 12 to 14 hour days, there was snow all over the place and the daytime temperature wassometimes below -15C. Nobody else was working but the Austrians just got on with it," Ian says. 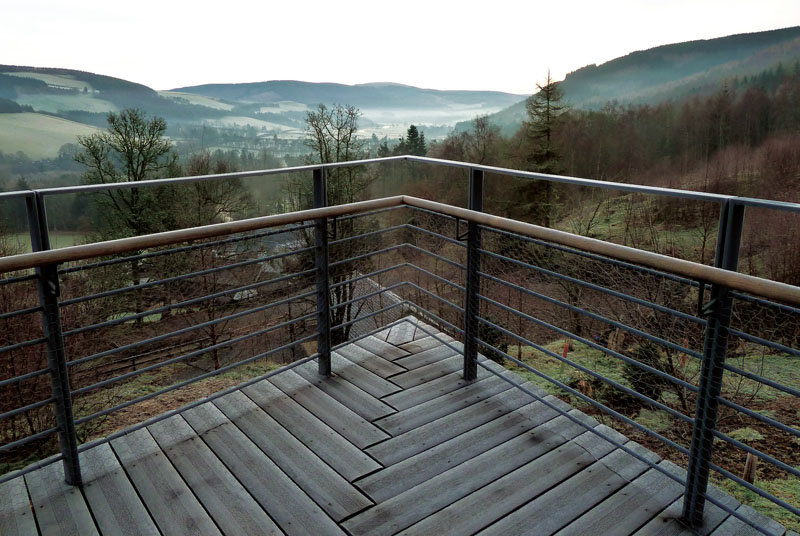 The finished house is a testament to the years of design work, and the team's attention to detail. While the house is fairly big, it still manages to complement its wooded, hilly setting rather than obtrude from it. And it's seriously green too.

The walls are insulated with 340mm of Steicoflex woodfibre insulation, which is made from lowgrade wood fibres that are bound together with tree resin. The internal sheathing board serves as the main airtightness layer. 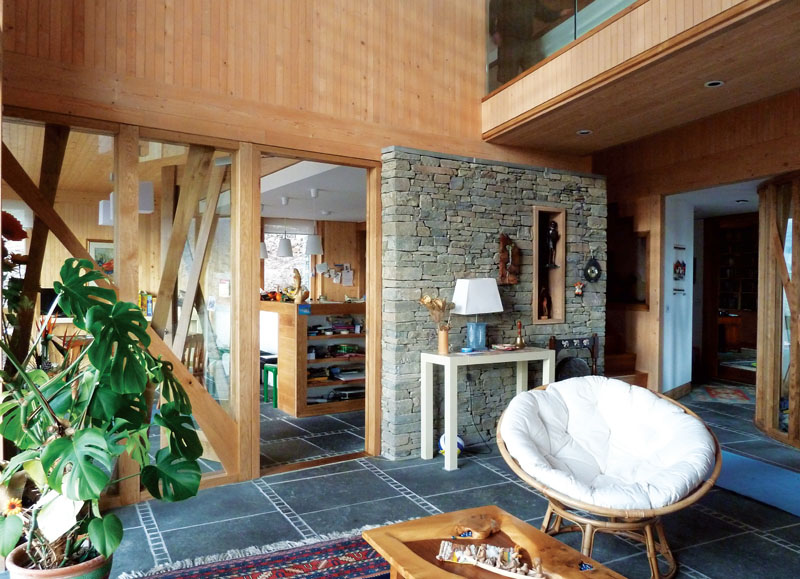 "The challenge was simply ensuring that once we had the primary structure tested and passed that we did not undermine it during the fit out phase," Gaia's Sandy Halliday says of meeting passive house airtightness standards.

The roof, which is topped with soil and planted with native wildflowers, was also constructed with brettstapel and insulated with 360mm Steico woodfibre. The ground floor features 260mm of Steico above the concrete slab too. Continuing the devotion to timber, the windows are triple-glazed, timber aluclad units, built and fitted by Austrian manufacturer Bohler Fenster.

And there's really not much else to it. This is a project that epitomises the simplicity that is at the heart of the passive house standard: build a high-quality envelope, orientate properly, make it airtight and insulate it well. 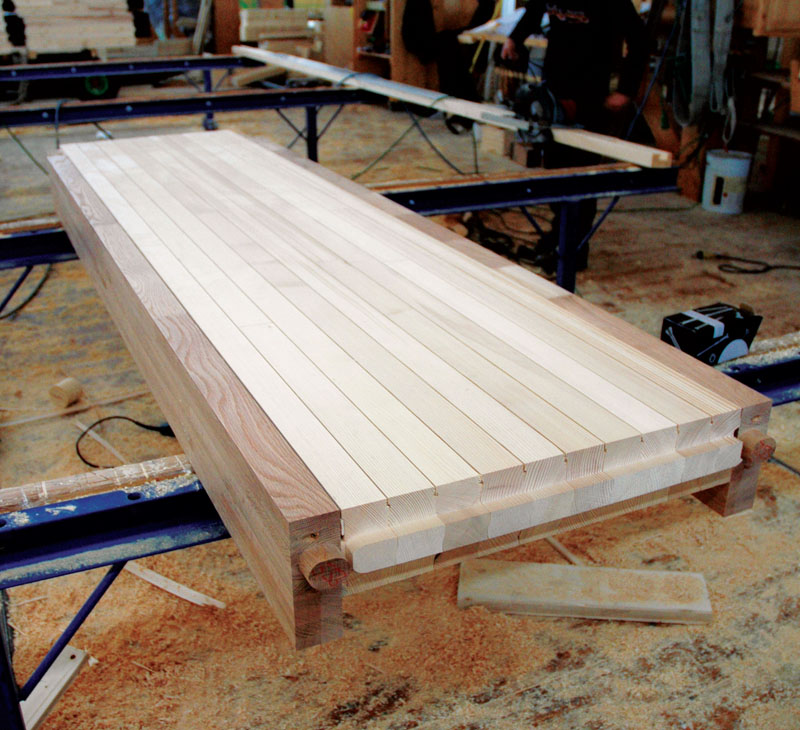 A custom-made brettstapel panel being manufactured in the Sohm Holzbautechk factory in Austria; a construction detail reveals an elegantly simple build approach

They also have a wood burning stove in the lounge, but find the house gets too hot if they use it. "The stove is more for comfort and effect," Ian says. A small solar thermal array helps to provide them with hot water too.

Overheating is more likely to be a problem than cold. To combat this, there’s a brise soleil over the big south-facing window in the atrium, plus balconies that overhang windows in the kitchen and south-west bedroom, and external blinds for the lounge and south east bedroom. The couple say the summer of 2012 wasn't much of a test for overheating, but they survived comfortably.

Gaia are carrying out a two year evaluation of the house's energy performance. But the awards are already rolling in. In June 2012 the house won the Scottish Home Award for Architectural Excellence. Not long after it was certified by the Passive House Institute — the plaque to prove it now hangs just outside the front door.

Energy performance certificate (EPC): B (81) — the architects told Passive House Plus that they have identified errors with the EPC that render it incorrect.

Other green features: The previously monocultural forest environment has been extensively re-planted throughout along with a pond and a sedum roof has allowed the reintroduction of native plant species, to enhance the biodiversity of the site. The bird and animal life is now significantly more diverse than was the case on the mono-cultural site that the house and gardens replaced. External cladding, fittings, furniture and many other elements have been built from materials local to the house