This new timber frame home in the south of England met the passive house standard despite a less-than-optimum orientation, launched a brand new design-and-build venture between its architect and project manager, and embraced a subtle-yet-elegant design that maintains a simple passive house form while drawing inspiration from the local vernacular.

This article was originally published in issue 15 of Passive House Plus magazine. Want immediate access to all back issues and exclusive extra content? Click here to subscribe for as little as €10, or click here to receive the next issue free of charge

Situated at the edge of the small village of Chieveley in West Berkshire, the Old Water Tower is a simple yet distinctive timber-clad four-bed house currently on the market for £750,000, which is also serving as a showcase for a new passive house based business venture.

Tom Gresford of London-based Gresford Architects had bought a site — previously owned by Thames Water, and which housed an old and ugly water tower — with a view to designing and building a passive house as a commercial development to demonstrate the financial viability of building one-off homes to the passive house standard.

He hired Mike Jacob of Trunk Low Energy Building as his project manager and, although it was their first time working together, they got on so well they have now teamed up to provide a ‘one-stop-shop’ service for the design and build of passive houses.

They have already embarked on two new projects since the completion of Old Water Tower last October — one is about to start on site, while the other is at planning stage.

“We got on so well, and we realised that we both had kind of very similar aims in terms of building passive house and delivering it — and delivering it well, because lots of people don’t deliver it very well,” said Tom Gresford.

“What we have found since is that lots of people are finding it quite difficult to commission passive house because not many people know how to do it properly. And it’s not just the design, it’s also the delivery.” 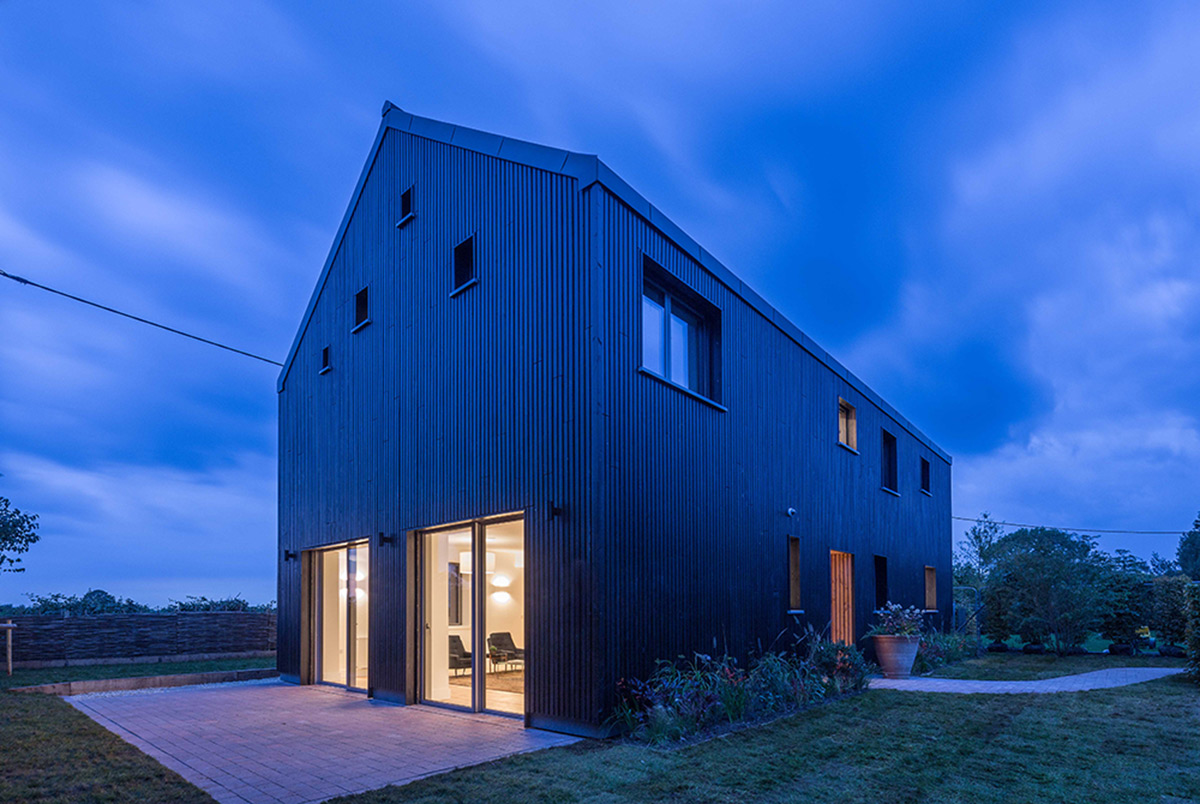 They certainly appear to have delivered with this project, a nearly 200 square metre detached, two-storey house built on a budget of £350,000, although that didn’t include the costs of demolishing the water tower or the extensive landscaping that the site required — or the nearly £25,000 in Section 106 council fees.

According to Gresford, the house takes its design inspiration from the traditional timber-framed barns of the local area: “On closer inspection it reveals itself as a crisply designed, carefully made, contemporary interpretation of the historic buildings it draws inspiration from.”

The timber cladding, although generally more expensive than using render, was less expensive than brickwork in this case and was critical to the aesthetic Gresford was trying to achieve, which he says draws heavily on the local architecture.

Closer inspection reveals that the house is predominantly west-facing, which may not be ideal for a passive house, but Gresford had his reasons for choosing this orientation, not least to take full advantage of the open countryside views from the edge of the village where it is located. 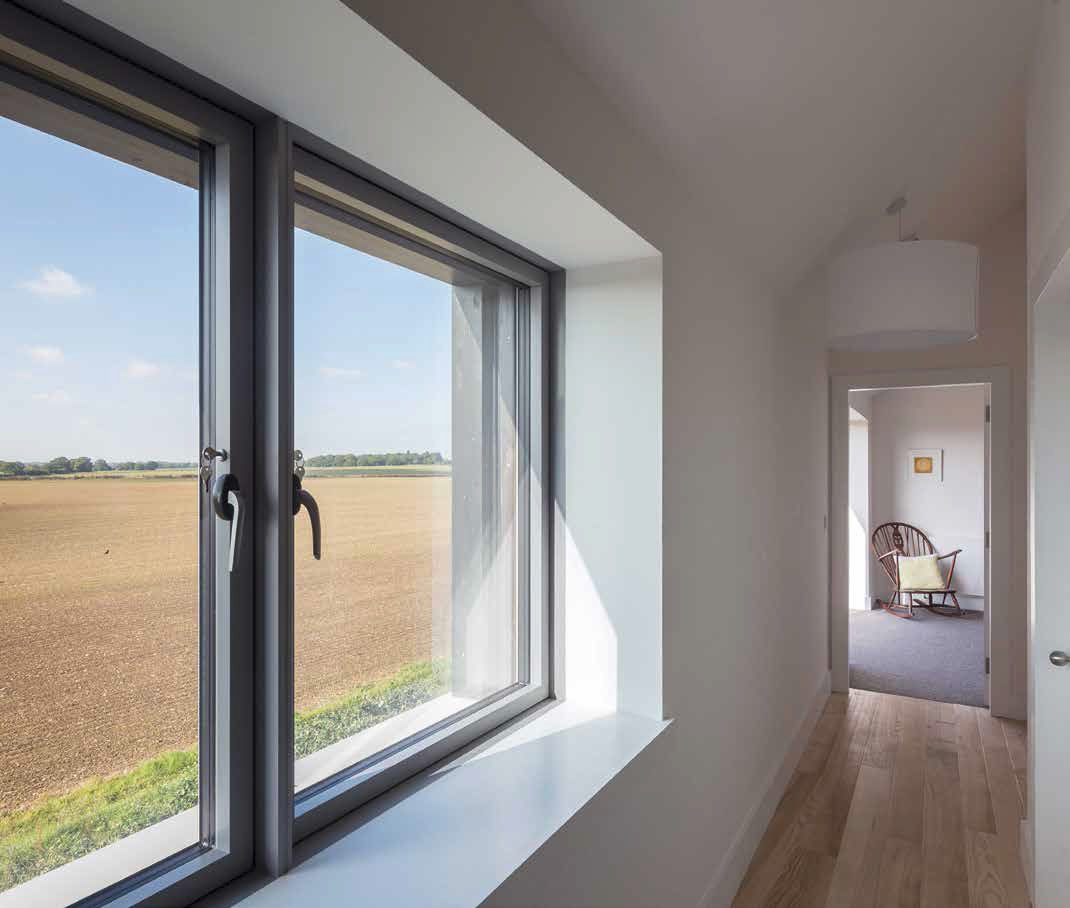 “Of course it’s ideal if a house faces south, but if there’s a reason such as this one, which is where you have fantastic views to the west and also very close neighbours to the south that we didn’t want to be overlooking, then it’s worth doing,” he says.

Fenestration is carefully arranged along the west elevation to maximize the views, whereas the east and north elevations have small windows to reduce heat loss and to avoid overlooking adjacent houses. The garden to the west has been raised by 400mm above internal floor level to allow full views of the landscape while eating and sitting outside.

The southern side of the house has large windows at ground floor level, opening onto a large paved terrace area. 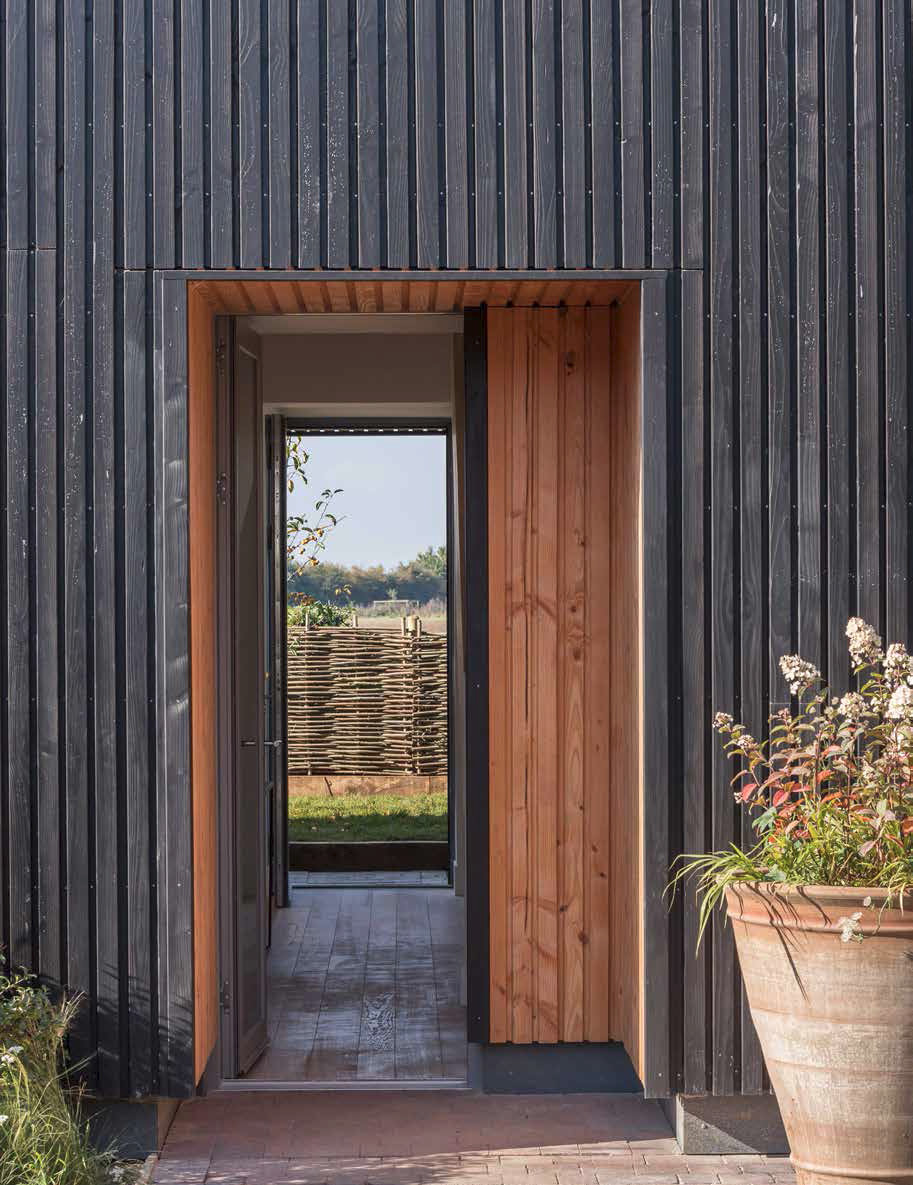 “It’s not a boring box, it’s got elements of style that are interesting without being ostentatious.”

If you were wondering about what look like very randomly placed small windows at the first floor level, they are intended to “offset the formality of the facade, and are inspired by the vernacular openings in dovecotes”. The windows are set at high level to avoid overlooking neighbours.

Inside, the ground floor layout is designed around two living areas separated by a hallway and staircase and a utility room. There are no doors except for the bathroom and utility rooms. The four bedrooms have distinct characters and all but the guest room (which has an attic with storage and plant above it) take advantage of the roof form by opening up to the internal apex of the roof to create a feeling of space in a relatively tight floor plan. 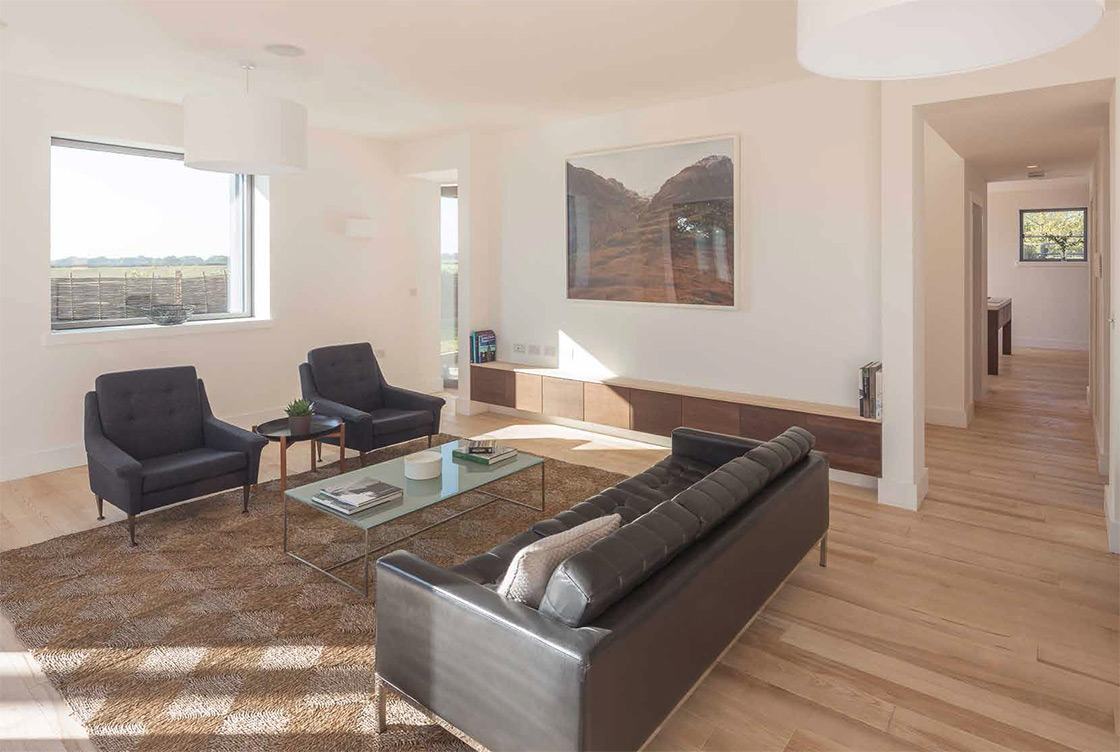 The two bathrooms, placed on the east side of the building, where the requirement for small windows fits neatly with the principle of reducing easterly glazing to prevent heat loss, also open up into the roof pitch.

According to Gresford, one of the keys to keeping the costs down on this six-month build was the pre-fabricated timber frame, which was produced by Irish passive house industry stalwarts MBC Timber Frame Ltd and erected in just two weeks. “That takes a huge amount of money out of the equation in terms of the overall build time,” he says.

Ideally MBC would have also fitted the windows (from Idealcombi’s Futura+i aluminium range) as well but they arrived too late to slot into their assigned build time.

The house isn’t on mains gas, so a Worchester 12i LPG gas boiler provides the space and hot water heating, while a Paul Novus 300 MVHR heat recovery system handles the ventilation side. The motorised external blinds are courtesy of Irish passive house firm Young Design Build and are critical for preventing overheating in the summer.

Gresford says the savings in cost and time achieved by things like the pre-fabricated timber frame “generally outweigh any extra costs for things such as the MVHR or external shading”, while triple-glazed windows are no more expensive than double-glazed.

“We went with MBC [Timber Frame] because they basically deliver a guarantee. They guarantee the airtightness, the U-values and the thermal bridge-free design. So those are three very important parts of delivering a passive house.” So while they had no intention of re-inventing the wheel in terms of delivering this particular project, there were still some design challenges to overcome.

Although there were good reasons for the house to face west, Gresford’s colleague and the company’s passive house designer, Francisco Cerezuela, says designing around this orientation but also taking into account the relatively high heat loss form factor (3.29) was “quite challenging”.

Once the form factor – the ratio of external surface area to floor area – is over three, achieving the passive house standard becomes noticeably more difficult.

“So we had to push for the thermal envelope,” he says, which led him to beef up insulation levels substantially – 400mm of bonded bead for the walls and 500mm for the roof – and using Springvale Ecobead insulation for better U-values compared to a lesser bead.

Similarly, 400mm of EPS insulation was specified on the concrete slab – using the passive house certified system by yet another two Irish companies involved in the project, Kore and Viking House.

Aside from the advantages of working with people with whom you have a strong and symbiotic working relationship, project manager Mike Jacob says his and Tom’s new “one-stop-shop will ultimately improve the construction methods themselves”. 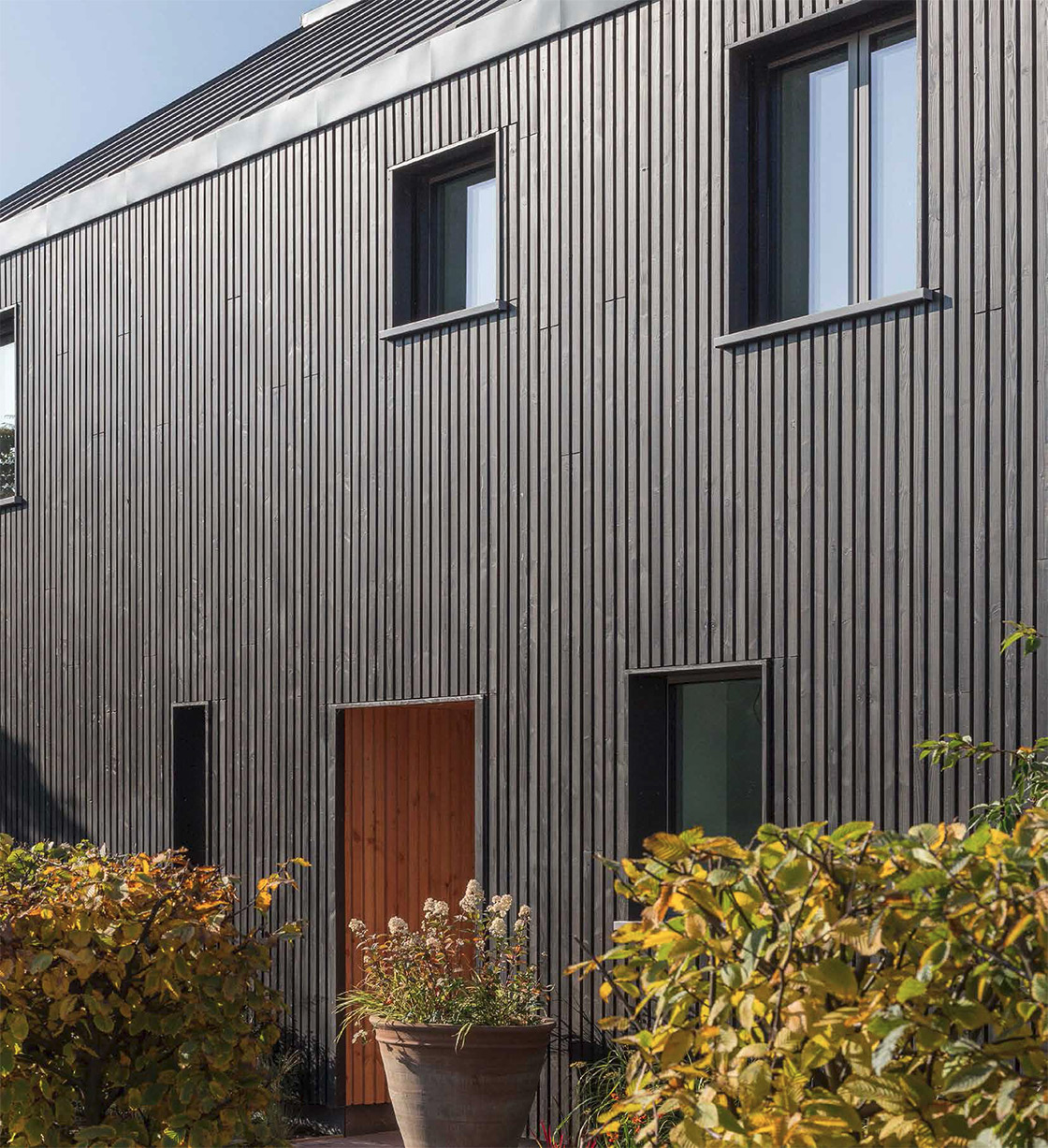 Their next project, which they are about to start construction on at the time of writing, is about two and a half times the size of the Old Water Tower, and it will use the exact same timber frame system from MBC and will also be timber clad, though there’s no danger that it might resemble a carbon copy of the house in Chieveley.

“The market we’re in, we’re very much looking to serve one-off clients who are after bespoke, unique houses, and therefore each project will still be different from the last, but the efficiencies will come from more discrete areas rather than them all looking the same.”

But Mike and Tom are clearly quite fond of Old Water Tower. “It was a big contrast with a lot of the jobs I do for clients, where I’m building their dream house and it tends to be complicated and unusual. This is a simple, modest design but at the same time it’s crisp and modern in its style. It’s not a boring box, it’s got elements of style that are interesting without being ostentatious,” says Mike Jacob, who’s not alone in this view.

Tom describes returning to the new passive house after the last Christmas break, having spent so much time in it prior to the festive season.

Even though it had been empty over that period, “it was amazing the atmosphere in the house, it just felt so lovely. You walked in and the air temperature was perfect, nice and fresh. You just don’t get that feeling with other houses.”

Heating system: Worcester 12i LPG boiler supplying one radiator to each room and towel rail to each bathroom