South Dublin passive house rises out of the ordinary

This skilfully designed new passive house in Blackrock manages to be lightfilled and strikingly contemporary while taking its design inspiration from the very ordinary Dublin street on which it sits.

Dún Laoghaire-Rathdown will be well known by now to regular readers of Passive House Plus as the first local authority in Ireland to put the passive house standard into its planning requirements.

Although that measure was formally adopted early in 2016, architects and Blackrock residents Stephen Tierney and Nicola Haines had long before decided that their new house would be passive house certified.

“We were indeed thinking about passive earlier and for quite a while,” says Tierney.

The married couple are also partners in business, running Tierney Haines Architects together. “A lot of our clients had been asking us about it for several years, so we were keen to have the house as a kind of experiment to share with clients. 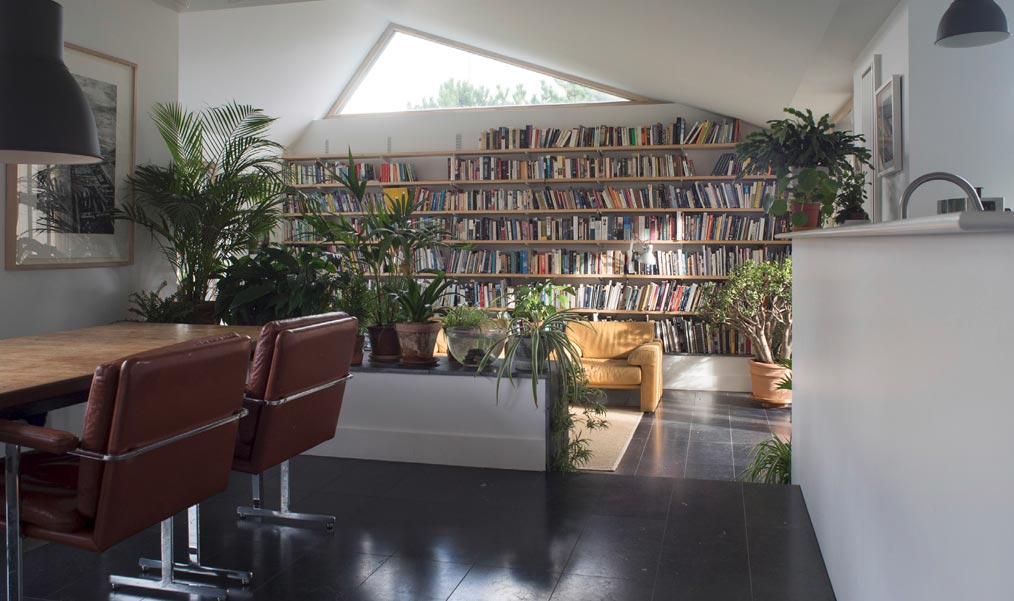 “We were also keen to achieve a fully certified passive house as it seemed to be timely and the right thing to do, and we needed to have some real experience of the [certification] process.”

The site was bought in 2015 after a search that took some ten years. “The problem was, of course, that most sites in south Dublin already have planning for as many townhouses as can be crammed on,” says Tierney. “We wanted a site with enough space for a house and garden, but they were all too expensive because they had planning for two or three houses.”

The advantage of an end of terrace site is that we have a lot of open sky.

But their patience was rewarded when they found a big site in Brookville Park with restricted, shared access. This meant that there could only ever be planning for one house, making it much more affordable. 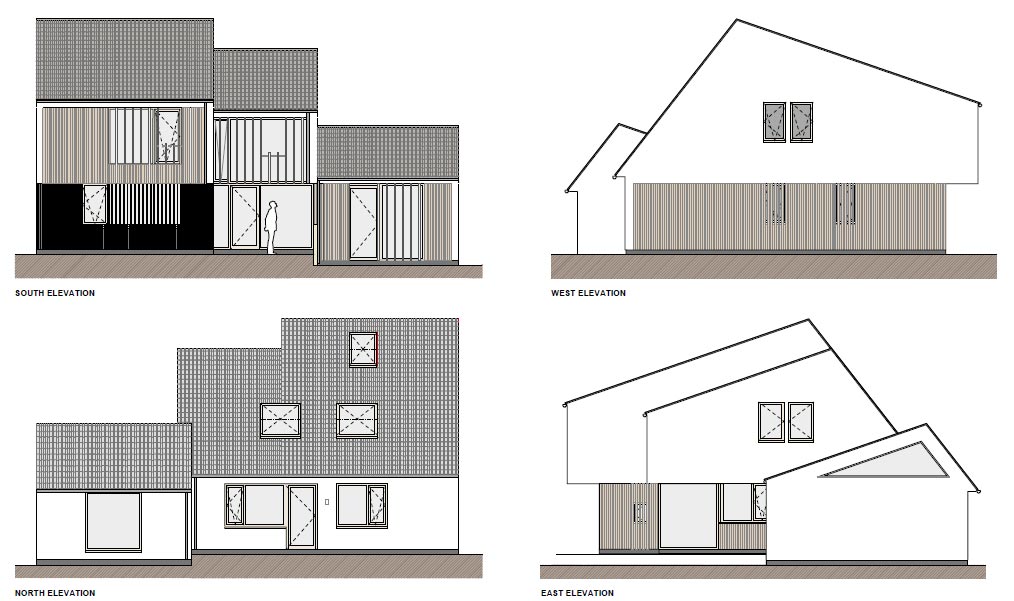 The house they built, which also serves as the office for their firm, is rather stunning, not just in terms of its overall design but for how unobtrusively it sits amid its immediate surroundings.

The idea of the distinctive and stepped three-form shape was to make the most of the curved site in combination with planning restrictions regarding the use of local materials, height limits and the need to adhere to building lines. The angle of the shallow roof, for instance, is cleverly aligned with the dormer roofs of neighbouring houses.

The most striking single feature is the larch and Durawood timber cladding at the south-facing front. The timber louvres function both as shading and for privacy from the busy traffic junction opposite. And even though the final result is highly contemporary and unique, it still manages to reference the pebble-dashed house next door.

We generally design quiet buildings that are connected to their local landscape.

“From an external point of view we wanted it to be a house that in some respects echoed surrounding buildings and remained quiet — particularly as you look at it from the west — and in another way had a very particular quality and its own character. We generally design quiet buildings that are connected to their local landscape.” 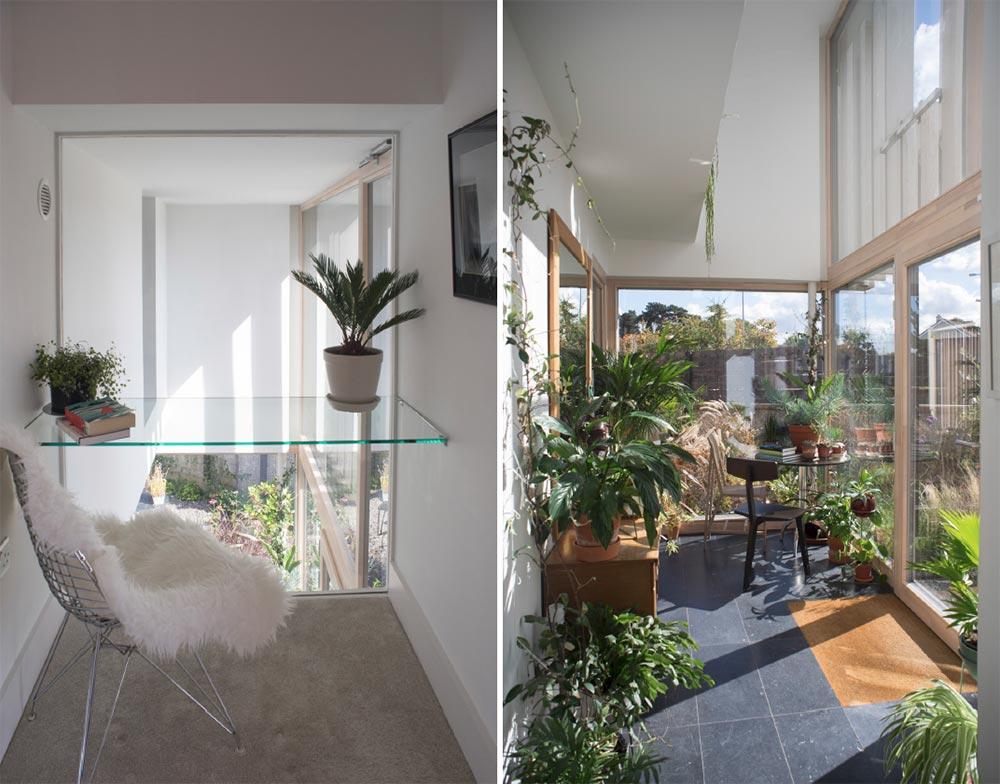 The decision to eschew concrete or cement in favour of twin-stud timber frame construction – with no outer leaf of masonry – as well as choosing timber cladding and cellulose [recycled newspaper] insulation, was as much to do with aesthetics and practicality as the fact that these materials have a smaller ecological footprint.

“We didn’t want to complicate the detail of the passive slab by having an outer leaf of concrete block. There is a satisfying density to the cellulose insulation and we had used it before for many years. The larch cladding is another favourite of ours and we treated it with Sioo [a high-quality wood protection] to give an even silver aging which ties it in quietly with the Durawood louvres, the concrete roof tiles, and the tone of the off white acrylic render — as quiet as possible to accentuate the planting and quality of light.”

Handily enough, Tierney Haines Architects also design gardens and the couple aimed to make the most of both the front and back garden spaces while creating a close connection between outside and inside.

The 180 square metre house has minimal circulation areas to maximise the floor space. Meanwhile, the office is at the front and can be reasonably well isolated from the family activity at the back of the house.

There is also a double height hall, sitting room and upstairs landing, while one of the bedrooms has a mezzanine level, and all take advantage of the house’s southerly orientation. 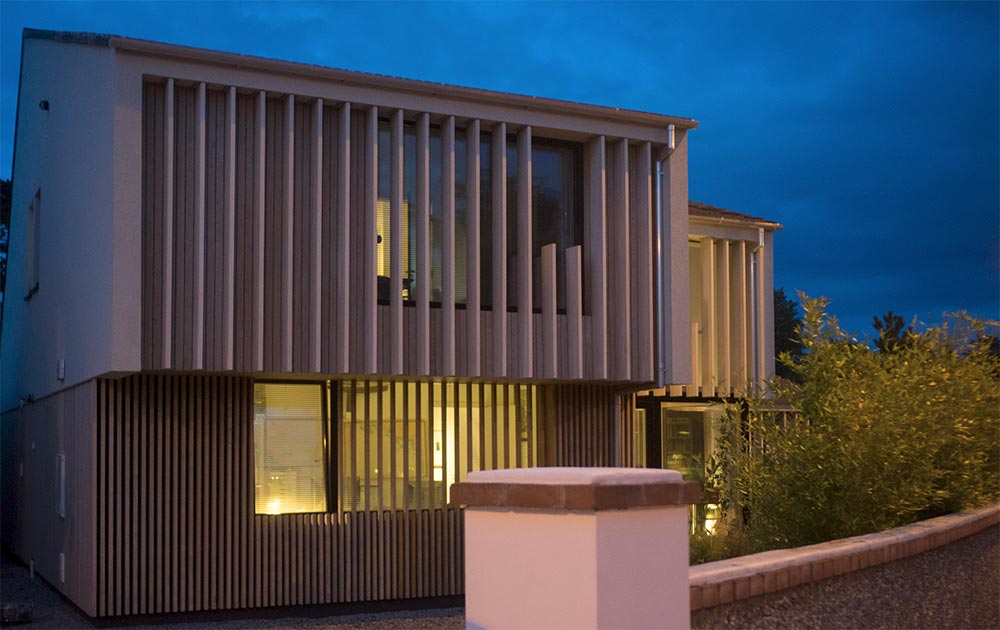 Passive house consultant on the project, Andrew Lundberg of Passivate, particularly likes the double height space. “I mentioned to Stephen and Nicola once during the process that the use of double height spaces is a compromise on efficiency, as it’s floor area that could otherwise be used.

“However it was clear that this was an important part of the design that wasn’t going to go away, and in the overall context of the house nothing extraordinary had to be done to compensate for it.

“As it’s fully glazed it gets a lot of sun, but is essentially isolated from the main part of the building so it’s just a nice space to sit in that actually has a very different feel to the rest of the house, and that’s actually very uncommon in passive houses where temperatures are normally very consistent all around.”

The house also breaks new ground in that it may be the first certified passive house to use Vaventis Fresh-r ventilation systems (the house has two). These are decentralised heat recovery ventilation (HRdV) units that are installed in specific rooms, unlike traditional centralised systems which have one ventilation unit and a duct network running throughout the house.

The unit serving downstairs is situated in the main living space and TV room, while the unit serving upstairs is in the (downstairs) utility room, with a short duct run from here to the upstairs bathrooms, and another duct run to the adjacent ground floor bathroom and office.

What does the data say on IAQ and energy use?

Indoor air quality levels look similarly consistent. CO2 levels are notably lower in the warmer months due to the added impact of window opening, typically ranging from 400 to 700ppm, with the unit that serves upstairs peaking as the family rises in the morning. As the house closes up in the winter months, CO2 levels raise, but seldom go above 1,000ppm. Passive House Plus queried one December event when night-time levels in the living area spiked at over 1,600ppm and temperatures rose to 23.5C. “We had a party with 25 people here,” says Tierney, checking his diary. “Obviously after a while you open a few windows.”

With constant access to the wifi-connected units performance data, Tierney says it’s possible to glean remarkably detailed information on occupancy patterns. “The Fresh-r HRV monitoring is extremely sensitive and even allows us to see if one of our boys got up during the night to go downstairs and check their phones for social media updates.”

As for primary energy, when the electricity factor is adjusted to be consistent with PHPP, the total metered primary energy use is uncannily close to the levels predicted in PHPP – the building used 107 kWh/m2/ yr in its first year, just over 1 kWh higher than PHPP predicted (though the real figure would be just 91 kWh/m2/yr, based on the current Irish electricity conversion factor).

While at first glance the gas and electricity bills of €383 and €1,005 respectively appear higher than the incredibly low figures posted for some buildings covered in Passive House Plus, there are mitigating circumstances, notwithstanding extra energy use in the first year due to the building drying out and the occupants learning how to run the building. And the occupancy is high, given the building’s dual role as a five-person family home and a four-person office. The office computer use alone is estimated at over 1,000 kWh/ yr, representing roughly €150 worth of electricity per year. 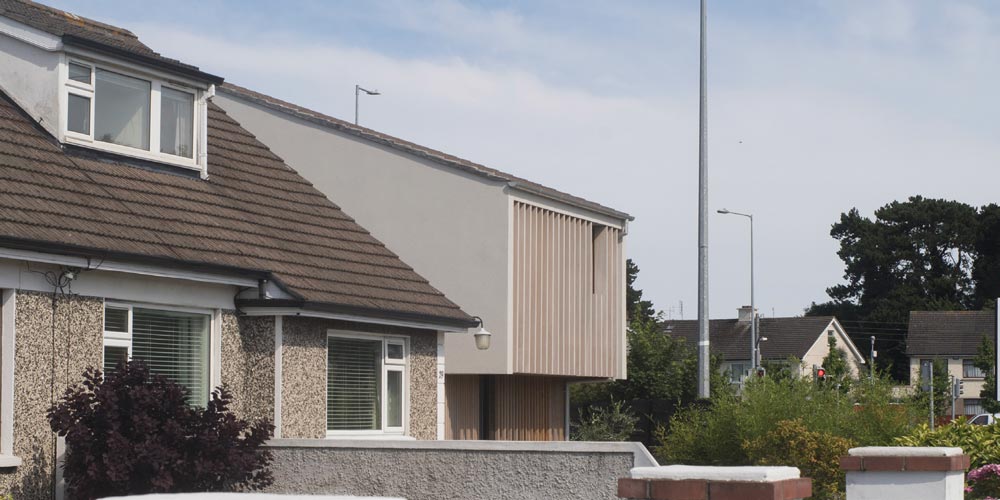 The two Vaventis units are capable of delivering 20 to 65 m3/hr of fresh air each – and for this 180 sqm house three units would ordinarily be recommended, especially given the fact the building also includes the Tierney Haines office, where Tierney and Haines work during the day along with two colleagues.

“We designed the office to have cross ventilation,” says Tierney. “We put in a little vent window – 400mm by 300mm – near the front door. That gives a little cross ventilation across the desk when you need it. If there are three or four in there, that window might be ajar for half a day.”

In the summer, for cooling purposes, the high-level window in the hallway helps to provide a stack effect, in addition to the remote controlled Velux roof-windows.

In addition, the louvred window in the downstairs toilet tends to be left open in the summer, and the stack effect from the landing roof-window helps to draw cool air from here around the ground floor. 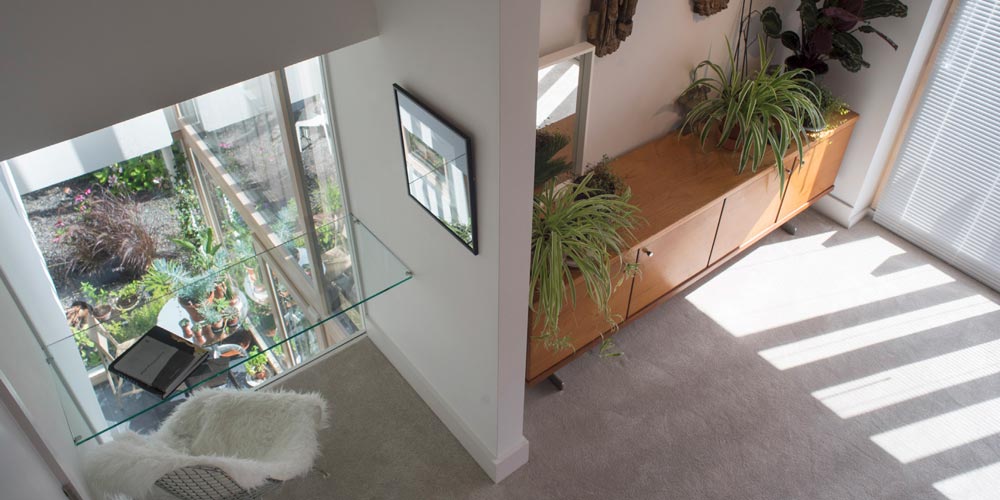 Tierney also points out that the super-insulated structure provides excellent acoustic insulation from the traffic outside. “It is many people’s first comment on entering – how quiet it is,” he says.

Tierney and Haines have been living in the house for a year now and are delighted. “We like the light most and how there is a different atmosphere at every time of the day. The advantage of an end of terrace site is that we have a lot of open sky giving us a very bright site.”

He says that he and Haines “constantly delight” in the steady temperatures of 20-21C downstairs and 18-19C in the bedrooms, adding: “The steadiness of it is one of the biggest joys, no warm times and cold times, no cold spots or warm rooms, it means we lead a more open plan existence, open doors, enjoying the full volume of the spaces.” 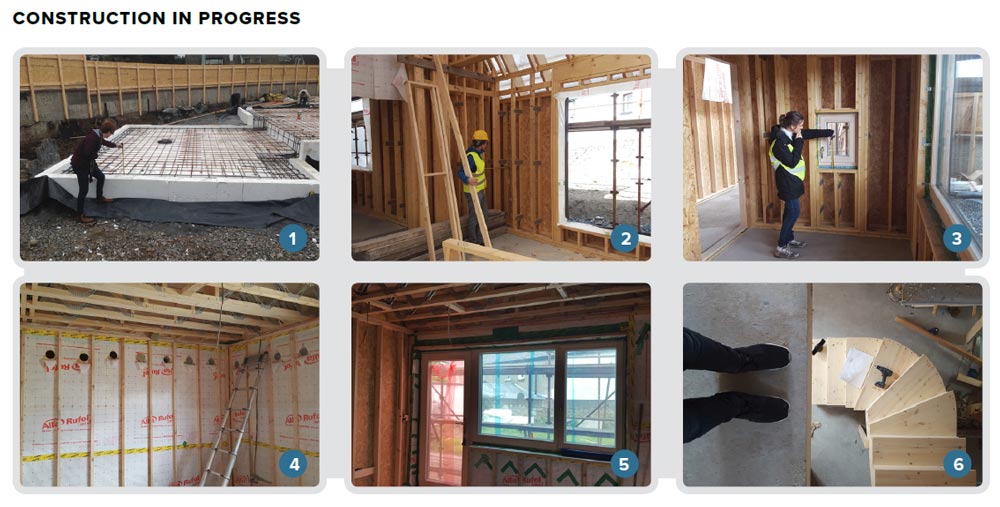 1 The passive slab foundation features 100mm concrete raft/screed over 300mm of Kore EPS 100 insulation; 2 walls are twin-stud timber frame incorporating 300mm of Ecocel cellulose insulation; 3 windows fitted into place, sealed with airtightness tapes; 4 Alfa Rufol Varia vapour control layer in place, with holes for Ecocel insulation visible; 5 the holes are then carefully sealed up and taped over once the insulation is installed; 6 a Hitchcockian view down the under-construction timber steps from first floor to ground floor. 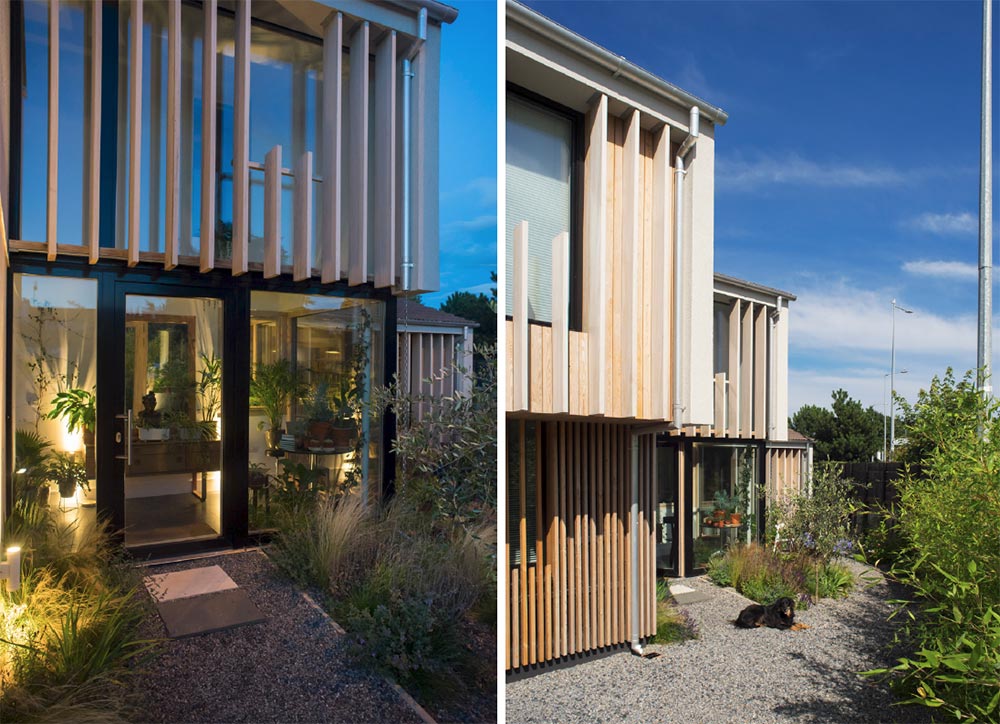 Electricity: No photovoltaic at present but planned for the future.