Warm and healthy Devon flats that need no heating

This affordable housing scheme in Exeter not only embraces a suite of healthy and natural materials, but it has vindicated the local council’s embrace of the passive house standard, with many of the units requiring no additional heating whatsoever.

When Exeter City Council set out to build the Knights Place affordable housing passive development in 2010, it was a brave move, particularly for a local authority that hadn’t actually built anything at all in twenty years. This was one of the earliest and largest passive house developments in the UK, constructed at a time when the industry in general wasn’t especially familiar or enamoured with passive building.

The fact that it went on to win Eco Building of the Year Award in 2012 offered some vindication for the path the council had chosen, but of course the real test lay in how the development worked out in practice. With one eye on its future building plans, the council set out to monitor both the performance of the two buildings, and the engagement of their tenants. The results make for fascinating reading. 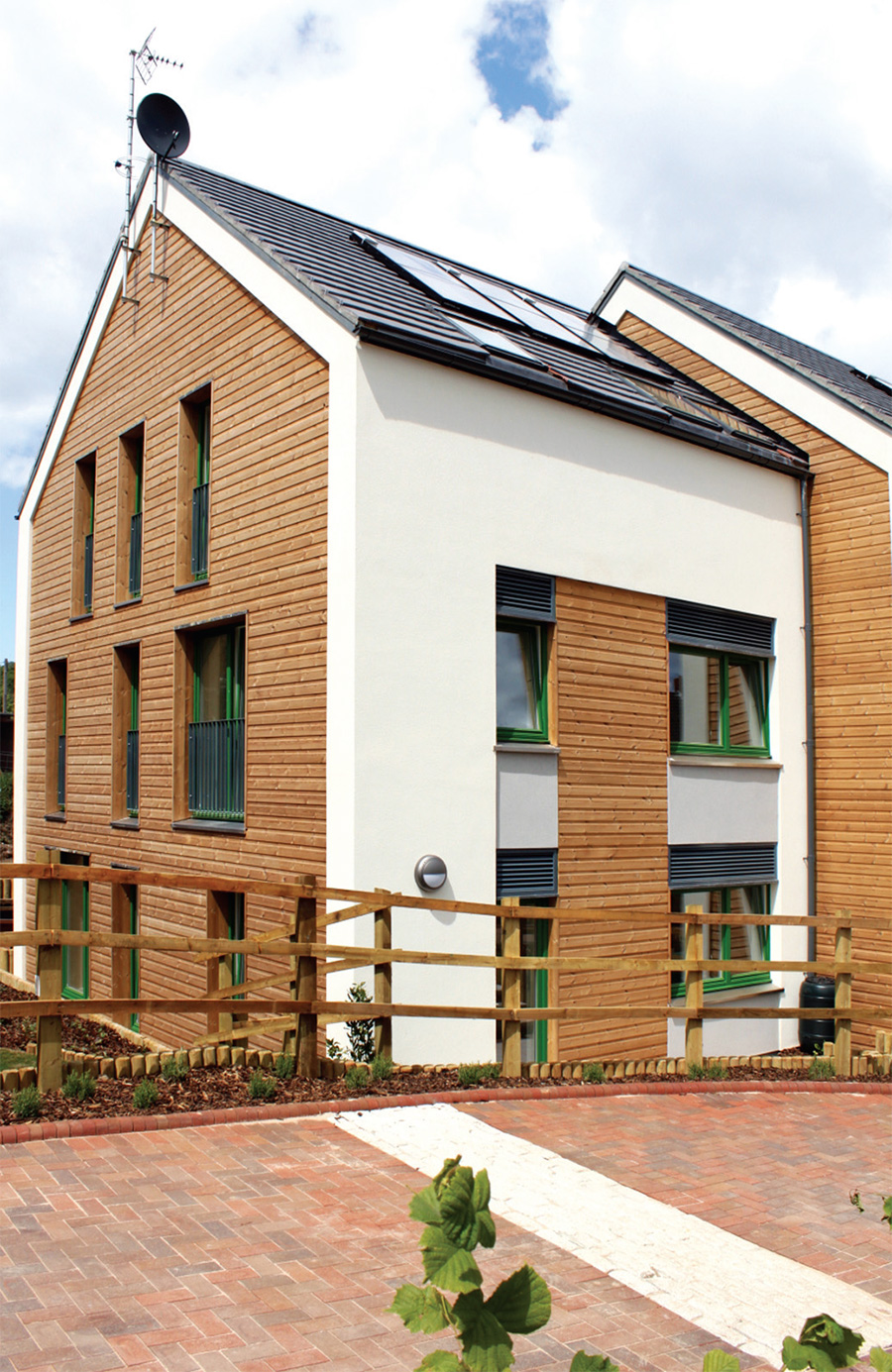 Emma Osmundsen, housing development manager with Exeter City Council, says that the decision to aim for passive in the first place stemmed in part from the fact that the new development was to be aimed at the over 55s. “We were acutely aware of fuel poverty issues and we were also very keen to build homes that promoted the health of our tenants. So we felt that the passive house standard was a good starting point.”

In addition, the council was keen to set a high benchmark for new housing in the city. “This was very much about us being exemplar developers and demonstrating to the wider market that you can deliver very low energy homes in a cost-effective way.”

The appointed architects, Gale & Snowden, had been specialising in low energy and fabric first development since the practice was established in 1992. Tomas Gartner, the lead architect on the project, explains while they hadn’t specialised in passive, he was keenly aware of the movement, and as a native German, he had direct access to Passive House Institute documentation at a time when other designers were struggling over the language barrier. 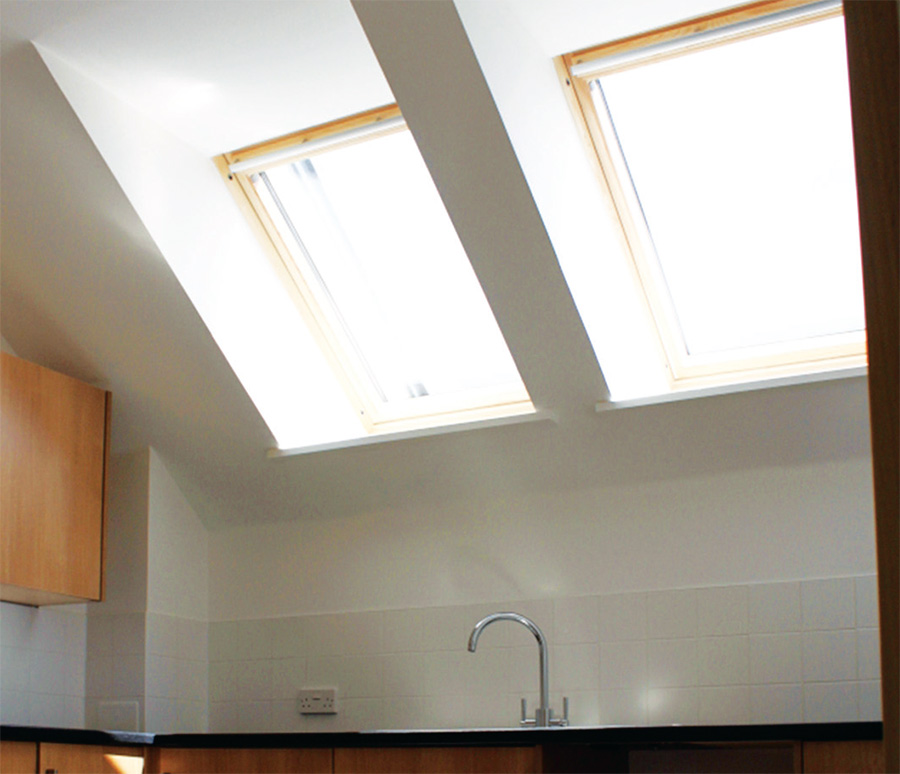 The decision to go passive with Knights Place was not taken right away, however. At the outset, the project was specified as Code for Sustainable Homes level five. Not that there was any major conflict between the two standards, and Gartner had in fact incorporated passive principles in the design. In addition to a compact footprint, he had also included passive standard U-values and airtightness, minimal thermal bridging and a glazing strategy optimised for solar gains. Code five however required a big renewable element. The roofs, says Gartner, were “covered in PV” in the initial design.

It was at this point however that the government grants for solar PV installations ran out, dramatically changing the cost profile for the code level five approach. And so now, despite the fact that the foundations had already been laid, the design team changed tack and began to aim for passive. Up until this point, the plans hadn’t even been run through the PHPP software.

But the fact that passive principles were already built-in meant that this wasn’t the issue it might otherwise have been. And ultimately, despite a range of construction phase hiccups, the project — built with external insulated blockwork — was completed and the tenants moved in.

None of these tenants, naturally enough, had lived in a passive house before, so the city council put a lot of time and energy into what they call ‘tenant training’.

“Every season,” Emma Osmundsen explains, “we would visit all of the tenants and take them through what to expect in that season in terms of how best to use their home. Because some of the tenants are older, quite often we would see them on a one-to-one basis.” 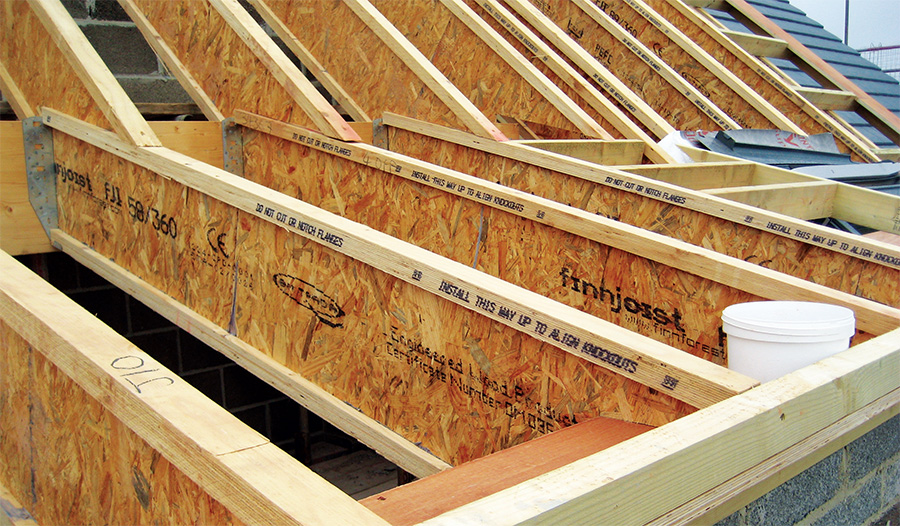 She says that to begin with, there were what she calls “psychological issues”. There are no conventional heating systems at Knights Place — solar gains are simply supplemented with a heater battery in the MVHR (mechanical ventilation with heat recovery) ductwork. But perhaps because the tenants couldn’t see fires or radiators, some reported that they were cold even when the sensors that the council had installed indicated a perfectly comfortable temperature.

As is frequently the case, the mechanical ventilation system also unsettled people at the beginning. A second, smaller development, Sivell Place – begun after Knights Place but finished before it – incorporated an MVHR system which, says Osmundsen, “had a control panel that was like something out of NASA.” In order to make the system more user friendly in Knights Place, the controls were reduced to a simple on/off switch and a thermostat. This change, however, did not have the intended effect.

“What we found was at Sivell Place, nobody touched their MVHR. The controls were just too intimidating. People left it on the settings and everything worked perfectly. Then in Knights Place, where we simplified everything, people kept messing around with it because it was always too accessible to them.” 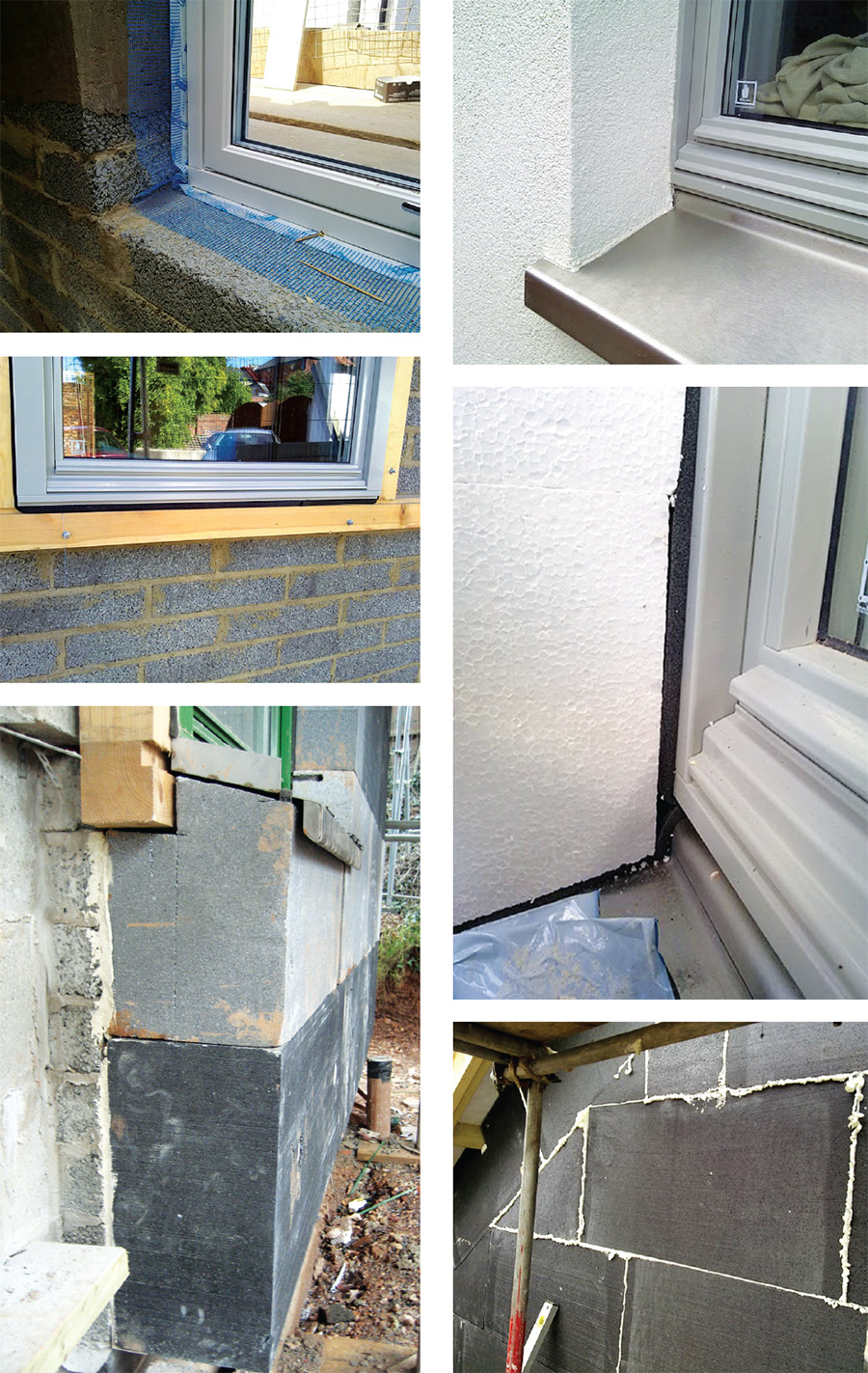 After the tenants moved in, an in-depth evaluation study began, funded by the Technology Strategy Board (now called Innovate UK). The building performance evaluation report, published last summer after two years’ worth of data and feedback had been collected, reported ongoing problems engaging with the MVHR. Tenants worried that because it was on all the time, it was using up energy, and they found it hard to grasp that the system was providing both heating and ventilation.

In the main however, tenant feedback was really positive. Astonishingly, in nine out of the 18 units, the occupants said they haven’t used the heating. According to Tomas Gartner the units in the core of the building – the 1st floor and ground floor units, which are best protected - aren't using heating. The units on the perimeters are using a small amount of energy - but they're still generally within what you'd expect of passive houses.

The hard data collected by the remote monitoring system confirms a comfortable, healthy environment throughout the two year period. In one of the three flats monitored, the tenants never turned on their heating at all, this despite the fact that the monitoring period covered one of the coldest winters on record. The second monitored flat recorded a heating energy use of 11 kWh/m2a – well inside the 15 kWh/m2a passive house threshold. In one flat, the equivalent figure was 33 kWh/m2a, but this was explained by the fact that the tenants – who were smokers – kept their windows open throughout the winter.

Nor were there any overheating issues in summer. Temperatures tended to creep up in one flat in particular, but this was explained by the fact the tenants didn’t open windows at all because they were afraid of the cat getting out.

One aspect of the project not captured by the monitoring process was the fact it was built to building biology best practise standards. Building biology, Thomas Gartner explains, is a discipline which emerged in Germany in the sixties, in response to the health issues that arose as a result of the rapid construction methods employed after the war. Much of the focus has been on the potential of volatile organic compounds (VOCs) to offgas from building materials and damage the health of the occupants. Since that time, building biology has expanded to embrace a broad array of building issues, centred primarily on creating a healthy indoor environment. 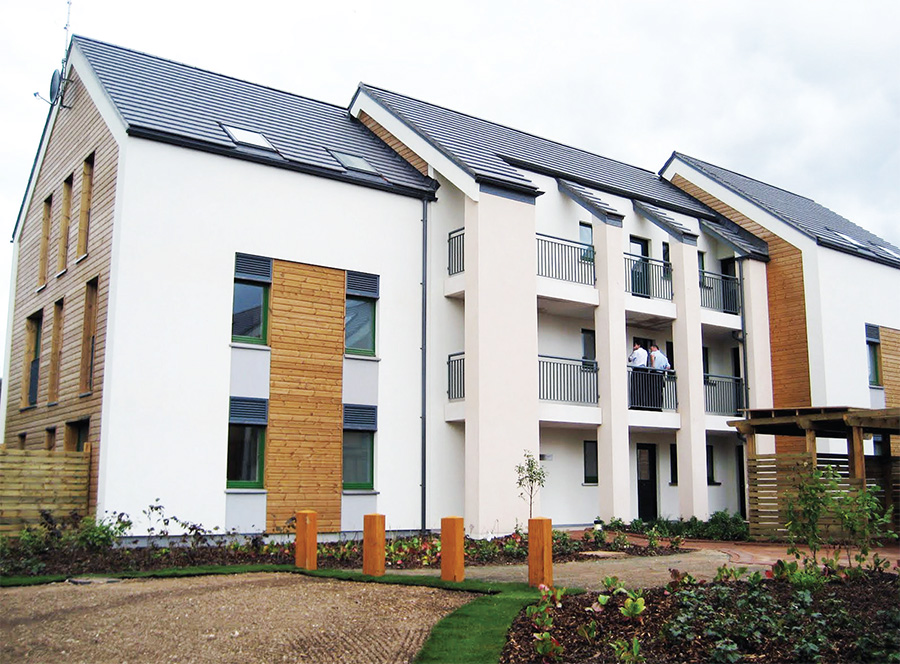 In Knights Place, natural and recycled materials were used wherever practical, as were locally sourced and low embodied energy materials. Low VOC organic paints, waxes and stains were specified throughout the build, and lead flashings were replaced by stainless steel and zinc. There are no carpets in the development, instead hard surfaces like ceramic tiles reduce the risk of dust mites. In addition, electrical wiring in bedrooms is radial, to lessen the exposure of tenants to electromagnetic fields.

Gartner says that taking measures like these does not have to be costly, so long as they are incorporated at the design stage.

“In all of our current buildings, we’ve brought down the cost of passive house considerably compared to our first passive houses. And at the same time, we are now constructing these houses to building biology compliant standards, and we are building them at no extra cost compared to a standard build of similar quality.”

Emma Osmundsen says that some tenants have actually reported that they sleep more deeply at night. “We didn’t tell them we had all these features,” says Osmundsen, “but we had a couple of instances where people said ‘Oh you know, since I moved here I sleep better’. We’ve also had a couple of people who had asthma and respiratory conditions who reported that they were having less frequent asthma attacks. Again, because there’s no central heating or carpets, we’re seeing much less dust. 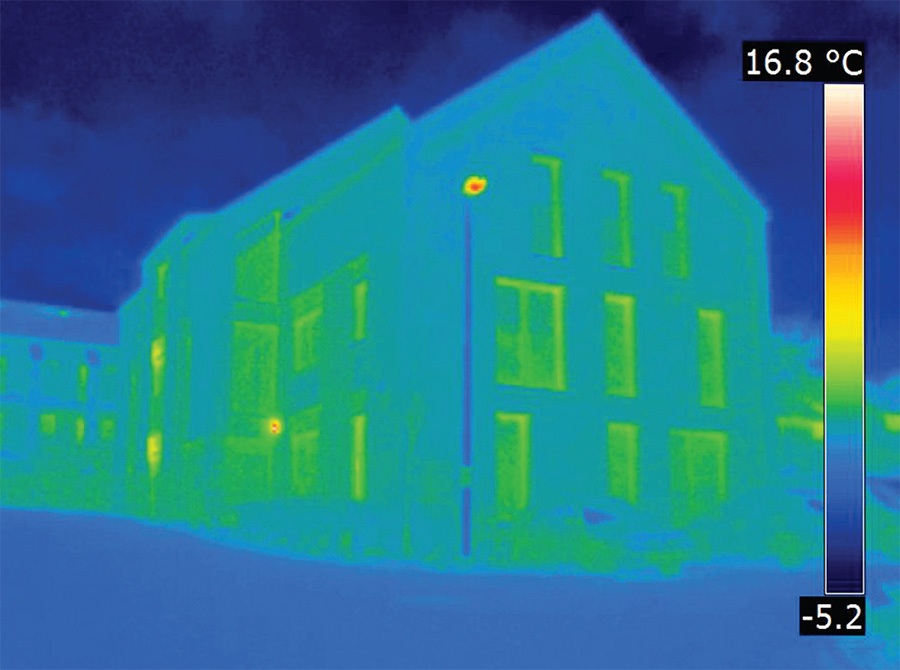 “A lot of people say ‘Oh you must be really proud and really delighted about Knights Place and I guess we are, but we’ve gone on to build quite a lot more passive house homes since then. For us, this is just the norm. We don’t build to any other standard.”

Primary energy demand (PHPP): 115 kWh/m2/a (above figures are the same for both buildings when rounded)

Energy bills: £450-£650 a year per unit, including heating, all electricity use & standing charge