This unique sports and drama hall, inspired by the architecture of local buildings, was built to a new standard that aims to ensure buildings deliver all round health and comfort to their users.

A new school sports hall in Worcester is not only certified to the passive house standard, it’s also the first building in the UK to meet building materials manufacturer Saint-Gobain’s new ‘Multi-Comfort’ standard.

The Bartholomew Barn, a new £1.2m school building at King’s Hawford, is a multi-purpose sports and drama hall that will be used for sports, assemblies, drama, music and dance.

John Christophers of Associated Architects, who had previously designed the school’s distinctive new boathouse, advocated building the new facility to the passive house standard. But he also persuaded the school to make the project one of the first to adopt the Multi-Comfort standard.

Saint-Gobain’s Multi-Comfort protocol is based on the fabric-first approach of the passive house standard, with its emphasis on solar gain, a highly airtight and insulated building fabric, and high quality ventilation. 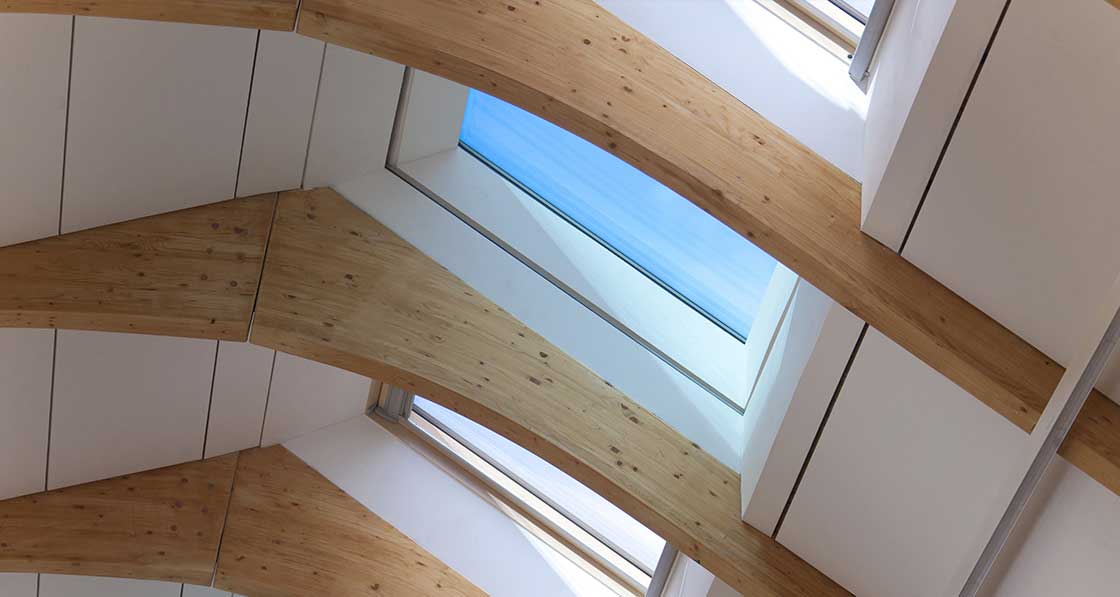 But it also adds factors like daylighting and acoustic comfort for a holistic approach focused on all-round occupant health and comfort.

“What we like about the Multi-Comfort standard is that it recognises sustainability is a complex multi-faceted concept,” said Christophers.

“Passive house as a standard is excellent on airtightness, thermal bridging, fabric-first etc., but says nothing about considerations such as acoustics, VOCs [volatile organic compounds], daylighting etc., all of which are included in Multi-Comfort.” 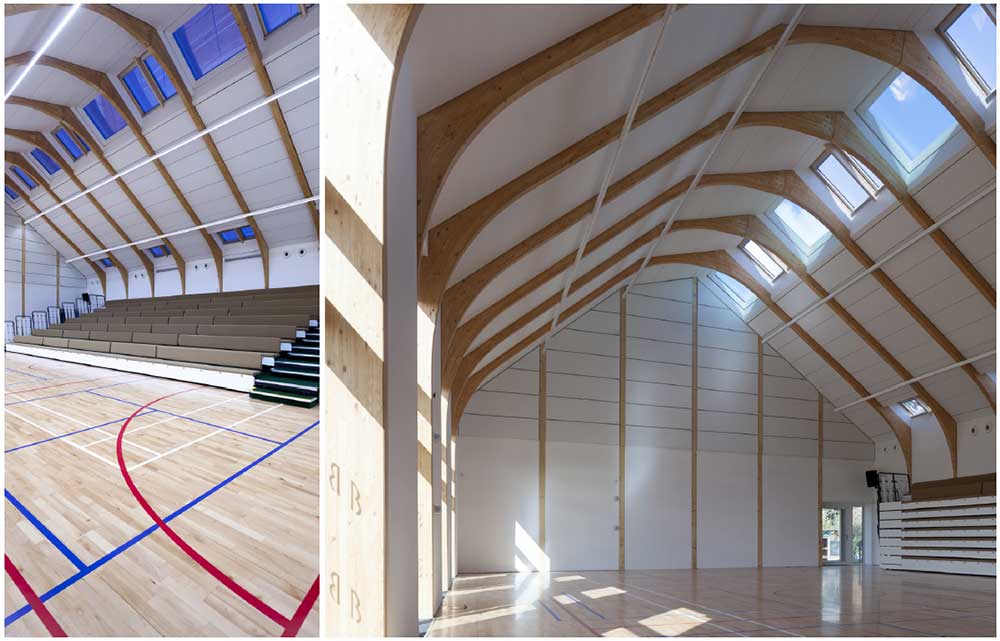 The client was keen for Bartholomew Barn to fit in with the architectural character for the school’s rural setting, which includes a listed Georgian farmhouse but also an ‘eclectic’ mix of historic buildings, many of which are timber framed.

Choosing timber frame was an obvious choice because it is quick to construct while lending itself to achieving passive house levels of thermal bridge-free, highly airtight construction.

Another factor in its favour is that it is thermally lightweight, meaning it will respond to temperature changes more quickly. This, says Christophers, is important for a multi-purpose building that might need to be at 16C for active sports uses, and then rapidly heated to 21C for drama or a community event. 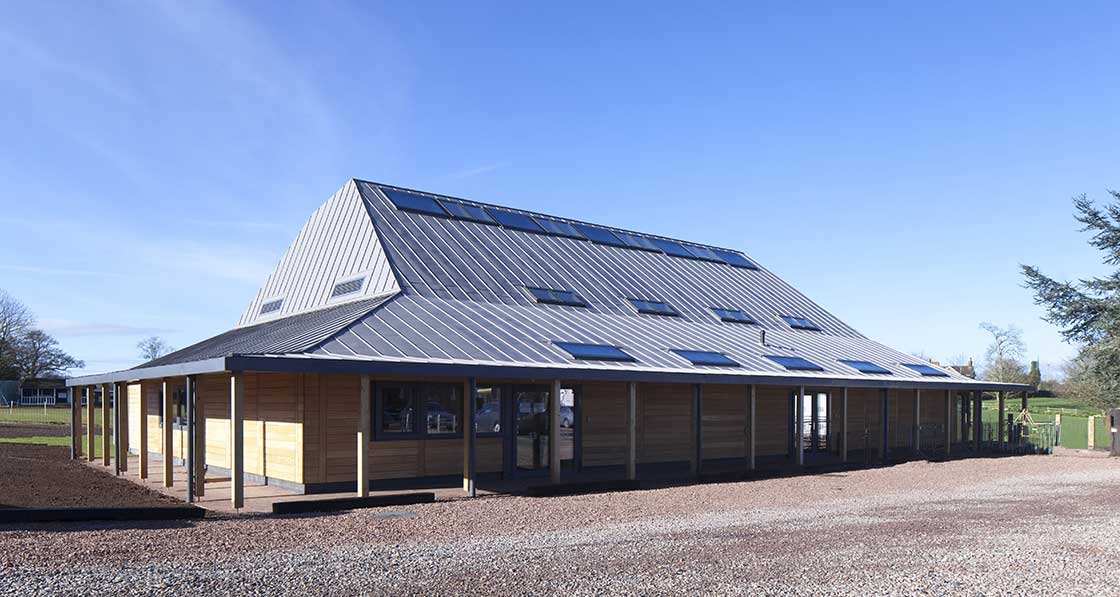 However, as a re-interpretation of an agricultural barn, it’s a very striking one. The asymmetric roof form allows strong natural daylighting from north-facing rooflights running the length of the building, and also increased headroom for badminton and other sports, without needing to borrow any elements of what Christophers describes as the “ubiquitous blind brick-and-tin box form” of a sports hall.

The roof slides down at a series of gentle pitches to a covered loggia protecting the entrances, and supporting apple and pear espalier planting between its posts (Worcestershire is famous for its pears).

Natural external materials include a standing-seam metal roof and untreated oak boarding help the building to sit comfortably within the landscape. 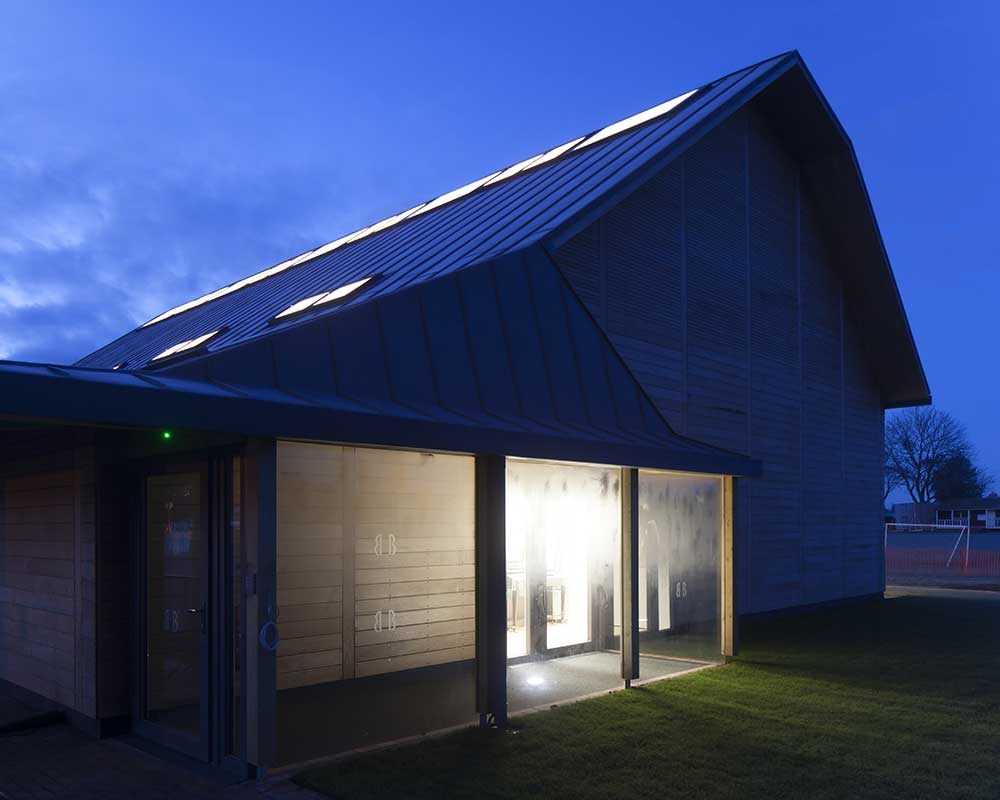 The form of the building itself provided the biggest challenge of the whole project by dint of “being a large volume, tall singlestorey building, as the building’s floor area and envelope parametrics are very different from a typical two or three-storey PHPP house, so the fabric has to work harder”, said Christophers. Hence, it is heavily insulated, to U-values under 0.1 for the walls, floors and roof.

To prevent overheating, and to avoid direct sun glare with badminton etc., the triple glazed rooflights, made by Fakro, face north. “They work well for those reasons although obviously they don’t therefore contribute to useful winter heat gains,” he said.

Users of the building are happy with it, particularly in comparison to the old school hall, which was known as the Cobb. Kevin Bethall, a teacher said: “The new building is in a completely different league altogether. It’s light and it’s airy. It’s spacious and obviously the fact that it is temperature controlled also helps tremendously.”

In terms of energy use during 2016, Cambridge Architectural Research — who are monitoring the building’s performance in detail — estimate that it used 4 kWh/m2 for space heating over the year, taking real data from March to December and extrapolating to a full year. This is just 26% of the passive house target (15 kWh), although it was noted that 2016 was a particularly warm year and that the building typically operates at lower temperatures than the PHPP design standard of 20C. 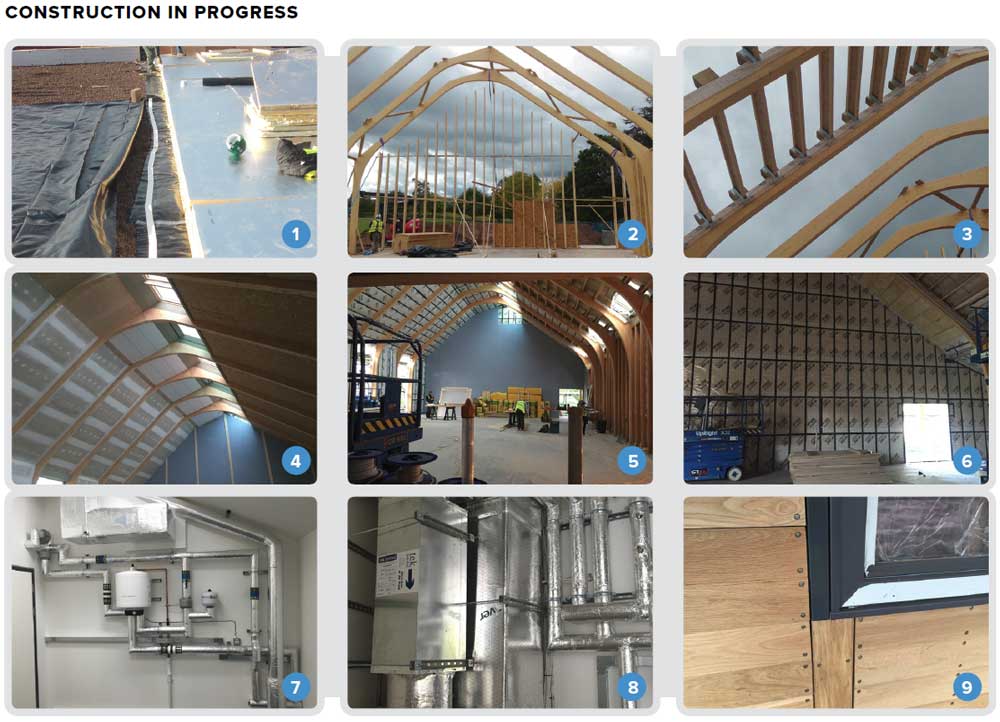 1 Celotex FR5000 insulation boards being fitted over the polyethylene DPM and 175mm Leca Insufil expanded clay insulation; 2 erection of the timber frame superstructure, the unique shape of which was inspired by the rich historical tradition of vernacular timber framed “cruck” buildings around Worcestershire; 3 installation of I-beams onto the roof timbers, with Isover Vario airtightness membrane in behind joist ends; 4 the asymmetric roof form allows natural daylighting from north-facing rooflights running the length of the building, and also increased height for sports; 5 & 6 the roof and wall build-up features Isover Timber Frame Batt 32 insulation with Isover Vario KM Duplex vapour control and airtightness membrane to the inside of this; 7 the Zip Varipoint instantaneous water heater with insulated pipework; 8 preinsulated ductwork for the Swegon heat recovery ventilation system; 9 Rehau triple-glazed windows installed flush with the external oak cladding, with the insulation layer sitting behind this.

The building currently runs on oil-fired central heating, but is shortly to be replaced by a central biomass boiler. Jim Turner, head of King’s School, also says natural light in the building is excellent, and that the acoustics are superb.

“The big change for us was when we did our opening concert,” he says. “It was quite clear that the performers were very comfortable within the building, the audience certainly was. The acoustics were such that, without a great deal of effort from the sound system, the sound was absolutely fantastic within the building.”

“But also it was just extremely comfortable.” 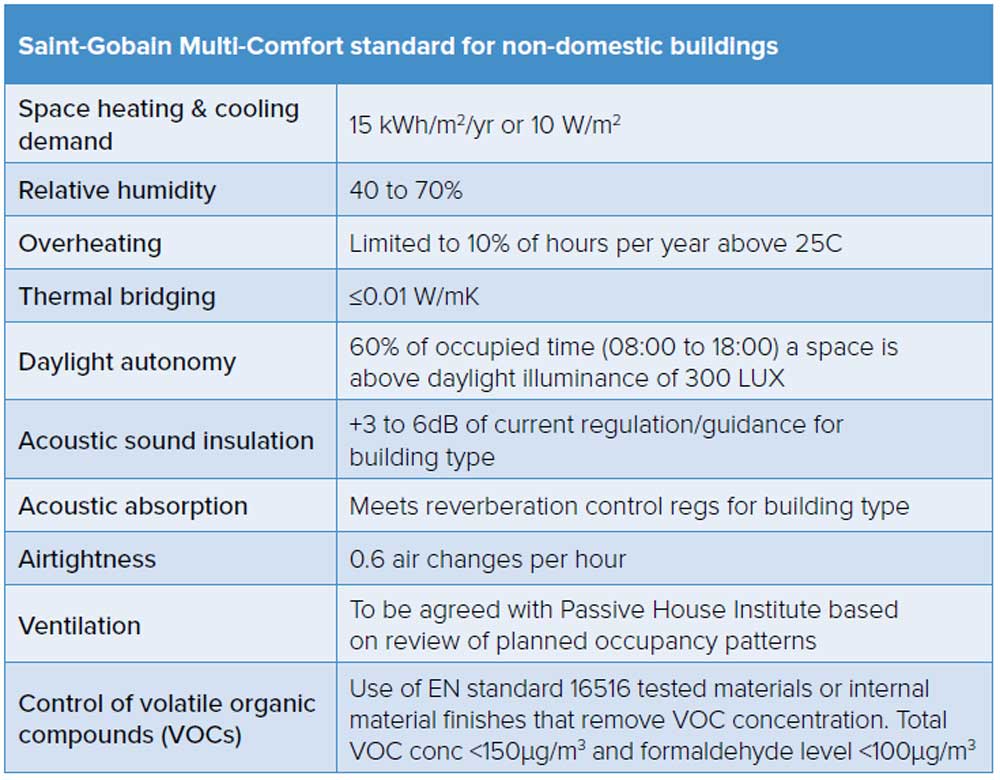 Since students and staff started using the Bartholomew Barn in March 2016, Cambridge Architectural Research (CAR) has carried out extensive research on the physical performance of the building.

As part of this research, CAR monitored both the performance of the Bartholomew Barn together with that of the old ‘Cobb’ building that previously housed the same functions, and which is still used by the school.

During the second quarter of 2017 (April to June), the Barn maintained temperatures in the 18 to 22C range for around two-thirds of occupied hours, while the Cobb only managed this for 50% of the time — frequently going below 15C and above 25C (i.e. overheating).

During the last quarter of 2016 (Oct to Dec) and first quarter of 2017 (Jan to March) the Cobb dipped below 15C frequently during occupied hours, unlike the Barn, while not surprisingly the Cobb has been consistently colder throughout monitoring.

During one particularly warm week that began on 19 June 2017, when outdoor temperatures were frequently between 20 and 30C, and sometimes over 30C, temperatures in the Barn actually fluctuated more than the Cobb, and sometimes went over 25C and close to 30C. It was noted that the Barn was much more heavily occupied during this period, and monitoring showed temperature peaks in the Barn usually followed peaks in occupancy.

The mechanical ventilation with heat recovery (MVHR) system in the Barn is designed to switch on when the C02 concentration goes over 800 parts per million (ppm). While there was a fault with the system at first, it has been operating correctly since January, and there has been an improvement in air quality since then.

Monitoring shows that during the second quarter of 2017, CO2 concentration in the Cobb frequently went over 1,000ppm and sometimes up to 3,000ppm — presumably during periods of high occupancy — while in the Barn it very rarely went over 1,000ppm, indicating much superior indoor air quality.

For non-domestic properties, the Multi- Comfort standard requires relative humidity to remain in the range of 40- 70%. Monitoring during 2017 has shown the Barn to be quite comfortably within this range almost all of the time, while the Cobb building is generally more humid, exceeding 70% humidity much more frequently.

What do the teachers think?

An anonymous survey of school staff at King’s School by Cambridge Architectural Research has revealed that staff are generally very pleased with the comfort of the Barn — as contrasted to the old Cobb building, which is seen as dark and cold by comparison.

CAR said their preliminary research found two main negative issues among staff: the barn occasionally getting too cold in winter, and too hot when heavily occupied in summer.

To solve the former problem, it recommended investigating the function of the predictive algorithm of the underfloor heating, and checking if the heating system is programmed for weekend operation, and if external users are aware of how to control it properly.

They also suggested that the use of carpet tiles for some events could be negating the effect of underfloor heating. According to a survey of 11 staff members, most (eight and nine respectively) found indoor temperatures and air movement to be ideal in winter, but six found indoor temperatures to be too warm in summer. To deal with summer overheating, CAR recommended investigating whether there was a need for fixed shading, or more frequent use of the external blinds.

Speaking about this overheating issue, architect John Christophers told Passive House Plus: “This was an issue during the first summer, as the night time purging regime was not fully understood by all the users. The monitored results are therefore not as good as they should be. Since then the user controls have been slightly simplified, and further training and explanation given to the users as well. We hope therefore that we should have much better results next summer.”
By Lenny Antonelli 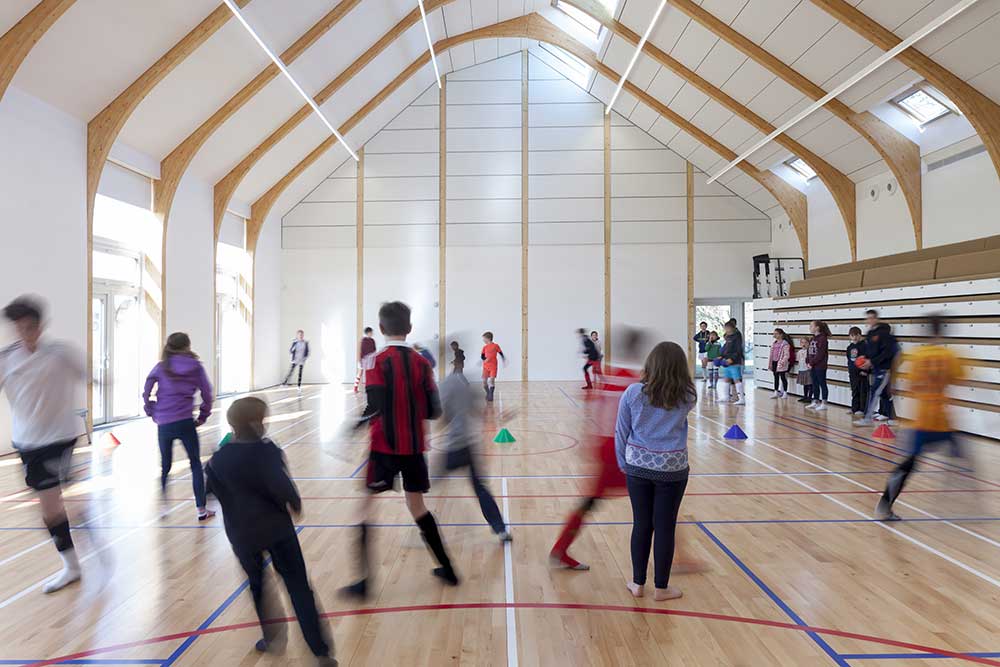 Heating costs (estimate): £74 per year, based on space heating demand of 4kWh/m2/yr as estimated by Cambridge Architectural Research for 2016, using monitored results from March to Oct. Also assuming boiler efficiency of 90% and oil price of 4.3p per kWh.

Measured heating consumption: Taking measured heating and electricity consumption between March and December 2016 (10 months), and extrapolating to a full year using heating degree-days, Cambridge Architectural Research estimates the building to have had a space heating demand of 4 kWh/ m2/yr during 2016.