Hitting Enerphit – the passive house standard for retrofits – wasn’t challenging enough for one Yorkshire retrofit project. The team also had to stop the building falling down, and avoid wholesale changes to the building’s external appearance.

The trust bought the stone barn in 2010, after renting land around it from Yorkshire County Council. The local authority wanted the site to serve the community, so the trust talked to people living in the area. Rather than a nature reserve, locals wanted the site to be used for growing food.

So the trust developed a plan: create a traditional Pennine farm and demonstrate how to grow food in a way that maximises biodiversity and minimises carbon emissions. 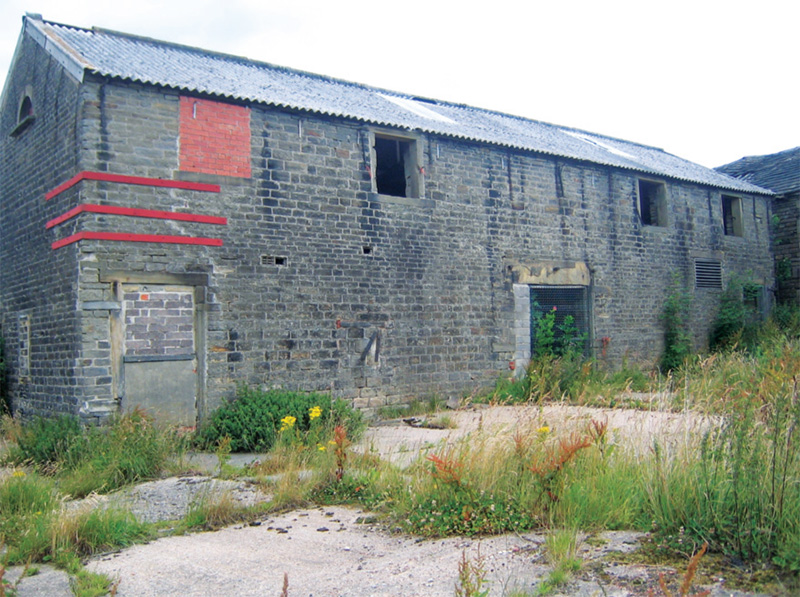 With agricultural emissions soaring, the trust was keen to prove low carbon farming was possible. The group envisaged upgrading the old barn, heating it with biomass, and powering it with wind or solar.

Then the trust’s staff met Bill Butcher of the Huddersfield-based Green Building Store. Bill told them about passive house, and said: “Forget all your renewables, forget your biomass, there’s gas on the site.”

Yorkshire Wildlife Trust CEO Rob Stoneman says: “He fairly quickly convinced me it’s not how you generate the energy, it’s how you use the energy.” For the trust, the long-term energy and cash savings from adopting a fabric-first approach made sense. The Green Building Store came on board as passive house designer, contractor and supplier of many key products.

The project had already been developed to planning stage by EcoArc architects, whose drawings and designs were used to get planning permission and secure funding.

The trust’s brief was fairly simple — it needed a large multi-purpose space for meetings and workshops, with meeting room and a kitchen for cooking demonstrations. “The layout of the building is very simple, it’s one big room,” Bill says.

But he points out one not insignificant problem: the original barn was found to be structurally unstable. “The place was falling down basically,” Bill says.

The design team, which now included architect Derrie O’Sullivan and Stuart McCormick from SGM structural engineers, came up with a clever solution: build an insulated timber box inside the old barn, and attach it to the old stone walls with reinforced TeploTie wall ties to help stabilise the existing structure.

“The actual timber framing holds the masonry up. In effect the masonry becomes a rain screen,” Bill says. 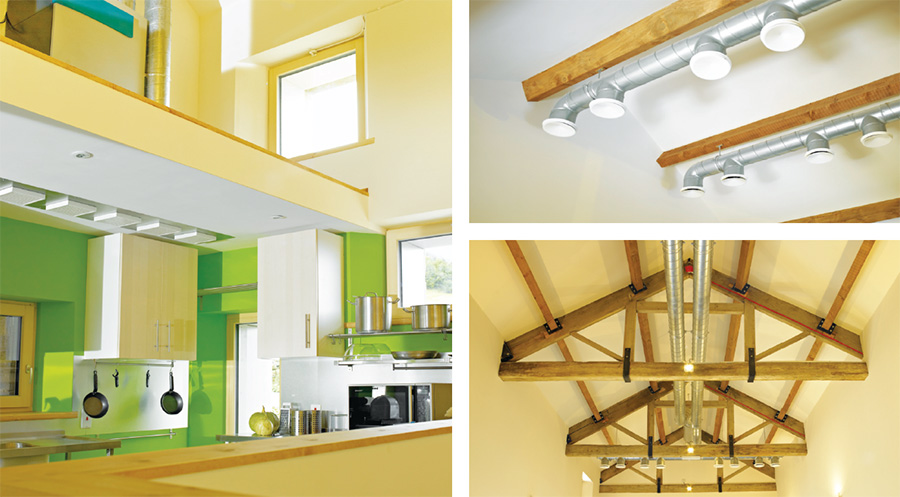 Luckily, this plan met another of the wildlife trust’s key goals: that from the outside, the old barn should continue to look like an old barn.

The box-within-a-box solution didn’t solve all the structural issues: one gable wall had to be rebuilt using the original stone facing, while some concrete was also cast into the existing structure to help stabilise it.

It also provoked a new question: would the design create a dew point in between the old and new structures that would encourage condensation and mould? Moisture posed a big risk: the barn is exposed to wind-driven rain, sitting above Huddersfield and looking out onto Saddleworth Moor, and the local sandstone with which the original barn was built is notoriously porous.

Crosson’s advice? If the space between the old and new structures was ventilated, moisture shouldn’t pose a problem.

To ventilate the cavity, Bill installed plastic air bricks at ground and eaves level in the old barn walls. He also wrapped the timber structure inside with Pro Clima WA vapour permeable membrane for a belt-and-braces approach. Leeds Metropolitan University has installed moisture monitors in the timber wall and cavity to keep an eye on moisture build up. 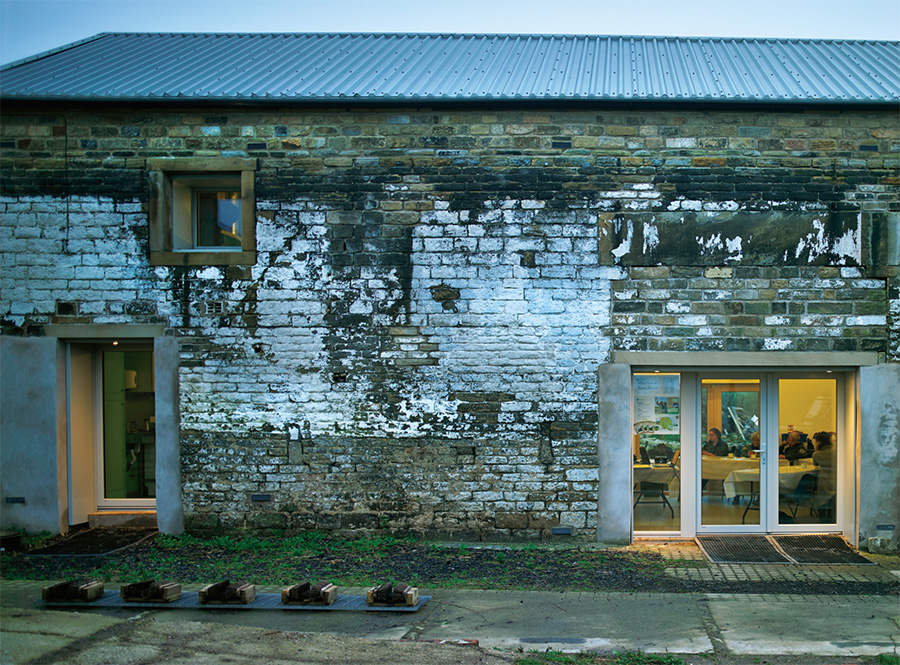 Inside, the timber frame is insulated with fibreglass. Green Building Store would have preferred a more natural material, but the budget wasn’t available. Spano VapourBlock boards, an alternative to OSB, provides the airtightness layer in the walls.

The Spano boards in the walls line up with OSB in the roof — which is taped with Pro- Clima tapes — to create a continuous airtight layer. Above this the TJI joists are insulated with polystyrene, with Gutex wood fibre board providing a breathable wind tight layer over this. Outside, the roof is clad with industrial metal, typical of barns in the area.

The roof was completely rebuilt apart from the existing trusses, and sits on the old stone walls rather than the timber frame. This means the trusses and purlins penetrate through the thermal envelope, the building’s only major thermal bridge.

Green Building Store installed Optiwin Alu2Wood passive house certified windows throughout the barn. Certified windows were crucial, as Green Building Store is going down the ‘elemental’ route to Enerphit certification. Rather than hitting the Passive House Institute’s targets for whole-building heat consumption, each building element will have to meet a specific energy performance target. The whole window installed U-value must be no worse than 0.85.

This meant the team had little flexibility when it came to choosing components — they couldn’t, say, compensate for mediocre windows by beefing up the insulation in the walls, or vice versa. “Every element has to be of a certain performance level, you can’t play one off against another,” Bill says of this approach to certification.

This approach is designed for retrofit projects in which designers have no control over a major aspect of the build — such as the orientation, window sizes and positions, or ceiling height.

The team had no choice but to take the elemental route. A structural survey had revealed flaws in the barn’s foundations, so Green Building

Store had to install a two-level ground floor instead of the single level they originally planned. This meant ditching the plan for an extensive first floor, meaning the ratio of envelope-tofloor- area went up. The orientation wasn’t ideal either, so hitting the 25kWh/m2/yr Enerphit standard for space heating became untenable

When it came to ventilation, the barn posed a challenge: the system must be able to adapt to huge variations in demand, being empty much of the time, then suddenly filling up with 20 or 30 people for a workshop.

Green Building Store installed two Paul Novus 450 passive house certified MVHR units. The first unit supplies the main hall. When the building is unoccupied this runs at fan speed one, but when it’s in use staff turn the ventilation rate up to speed two. If relative humidity goes above 80% or CO2 goes over 1400ppm, the system goes into boost mode — speed three.

If the main hall is packed and the first unit can’t provide enough ventilation, the second Novus — which ordinarily only ventilates the meeting rooms — enters boost mode and starts supplying fresh air to the hall too.

Rob Stoneman is impressed by the quality of air inside: “Bill said this would be the case, and I didn’t quite believe it, but it feels really fresh, it’s really noticeable. You go in and you’re just feeling warm outdoor air rather than indoor air.”

Rob originally wanted to heat the building with wood, but Green Building Store persuaded the trust to go for a cheaper gas boiler, and to put the money saved into the building envelope instead.

Bill knew that, although the building wouldn’t need much heat, there might be times when hot water demand skyrocketed. So the team installed a fairly big Vaillant 12.9kW boiler — even though only 2.2kW is needed to heat the barn when it’s -10C outside. Putting in a large boiler with lots of radiators and a big volume

of water means the boiler won’t cycle, and the lower return temperature helps the boiler run as efficiently as possible.

“An additional advantage of using such a simple heating system is that every plumber in Huddersfield will know how to maintain and fix it if it breaks down. For maintenance purposes, it’s the easiest option,” Bill wrote on his blog about the project at http://passivhausblog.co.uk

Inside, staff can control the temperature with a simple room thermostat that’s set at a constant 19C.

Since the barn opened last September, there’s been a little overheating in one of the meeting rooms. This was caused by two wireless routers sitting next to the boiler interfering with the controls, and has now been sorted.

Bill says that structural issues with the foundations, the state of the existing masonry, and the need to stabilise the old walls made the barn — dubbed the Cre8 Barn — a tougher project proposition than Green Building Store’s new build passive house, Denby Dale.

But Stirley Farm will get there in the end: Its airtightness test came in at 0.33 air changes per hour, and Enerphit certification is pending.

Derrie O’Sullivan has brought students from the University of Huddersfield here to show them what passive house and Enerphit is all about.

“Taking people on site and touching and feeling, there’s no substitute for that,” he says. “It’s about spreading the good word really.

“You say: ‘What’s different about this, gosh it feels comfortable, what is it?’”

The Yorkshire Wildlife Trust is now using the Cre8 Barn to teach people how to grow and cook food in a sustainable manner. Hardy shorthorn cattle graze the farm, and the trust is planning to improve meadows and restore wetlands, hedgerows and old stone walls on the site.

“We gave [Green Building Store] a fairly tight budget to work to and they’ve been absolutely brilliant in sticking to it,” Rob Stoneman says.

“Through the winter it was beautifully warm,” he adds. “It just feels really nice, I think it’s super.”