Complete with butterfly roofed extension, this fabric first renovation has turned a cold and uninspiring 1970s bungalow into a cosy A-rated modern home, with some clever design touches helping to open the house up to wide-angle views and dramatic coastal light.

Derek Sherlock bought the bungalow which would eventually become his and his wife’s new home back in 2014 and rented it out while researching how he might renovate it. At the time, he says, it was probably the coldest house he was ever in.

“Drafts? Lot of drafts coming up through floorboards. It had an uninsulated suspended timber floor. We rented it to a builder’s son, and he went around the skirting board with some sort of a tape to try to cut down on the drafts. They had a double layer of curtains in the TV room just to try to keep the heat in. It was one cold bungalow.”

Their family reared, Derek and his wife had decided to downsize, and return to his homeplace in Ballisodare, County Sligo. The house they bought was your typical 1970s bungalow: long and dark, with an uninspiring layout, and, as he was quick to find out, an even more uninspiring thermal profile.

There had been attempts to upgrade the insulation and the windows over the years, as well as an ill-advised attic conversion that fell far short of acceptable space and height standards. The house really had only one good feature: there are stunning views of Knocknarea and Benbulbin to the north and the Ox Mountains to the south. Taking advantage of those views would be a key element of the renovation. So too would comfort. 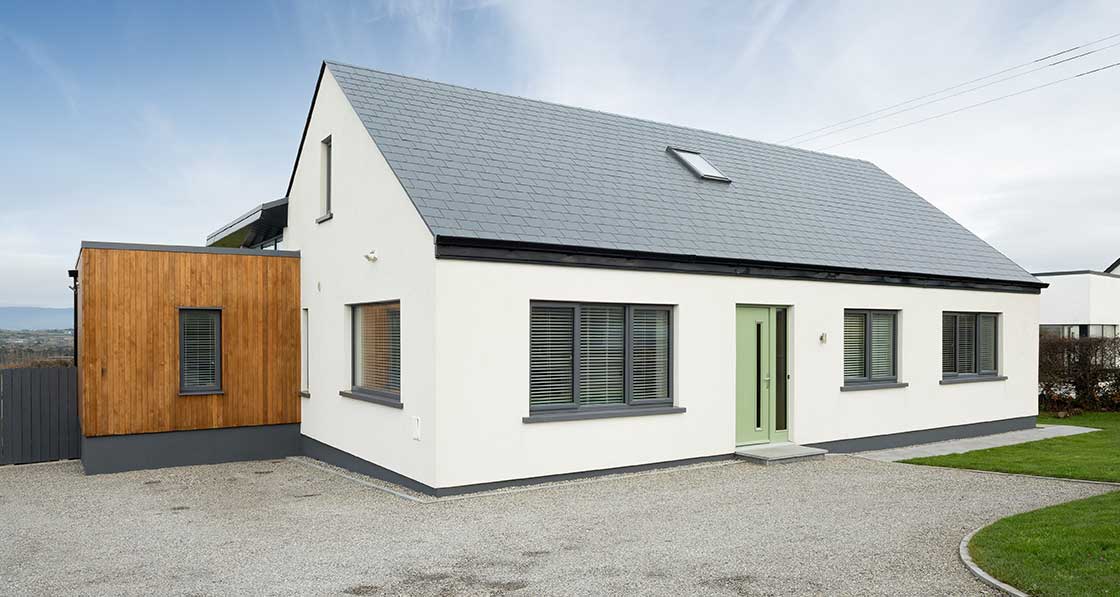 “I wanted it to be good for the environment, but I also wanted it to be really comfortable for myself and my wife,” says Sherlock. “The money thing wasn’t a big motivator, though it’s actually cheaper to run than I thought it would be.” More about that later.

Light was another key requirement, as was a more modern layout and additional downstairs space. In the two years prior to the start of the project, Derek and his wife did the rounds of building expos in Dublin and Belfast, talked to a lot of experts, and explored the full range of options that were open to them.

“I looked at windows – would we do double or triple glazing? External wall insulation? Would we dryline it? Pump the walls? Were we going to do underfloor heating or rads? We looked at solar panels, heat pumps, oil or gas. Everything.” 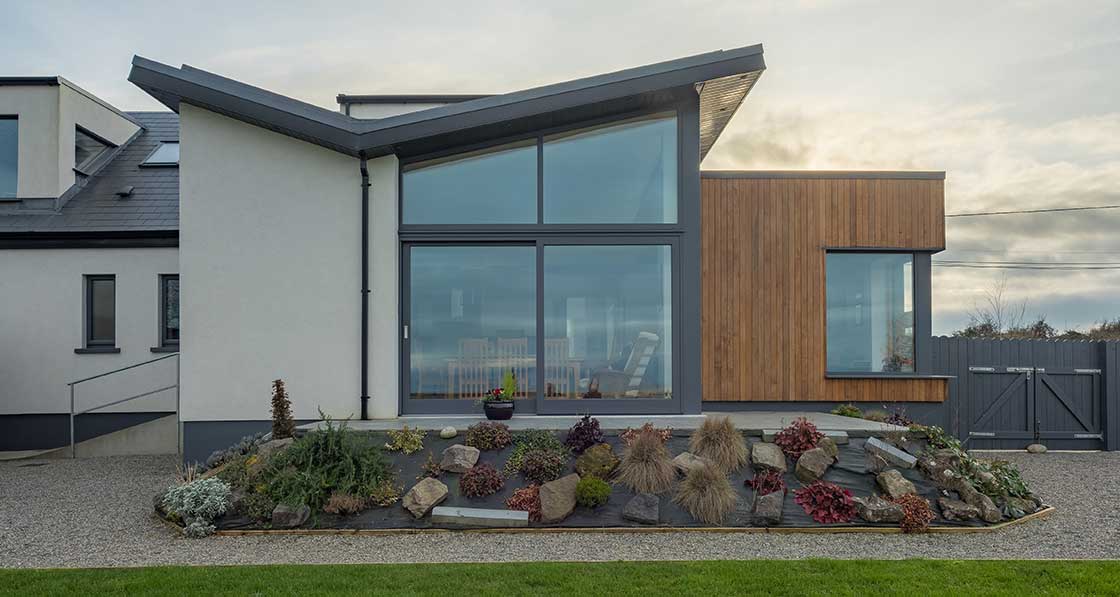 Derek also read Passive House Plus eagerly during this time to glean ideas for the project, and to learn about low energy building. He bought himself a maths copy, in which he sketched out the existing layout of the house, then began experimenting with different layouts and extensions, looking for ways to introduce light and create better room configurations. He also engaged James Walsh of Low Energy Design to assist with this element of the project. Walsh is a passive house architect with extensive experience. His work on St. Bricin’s Park, a Dublin City Council passive refurbishment project in Arbour Hill, was profiled in issue 30 of Passive House Plus.

Working together, they created a design which sought to make the most of the spectacular views, ensure a light-filled living space and deliver the levels of thermal comfort that had been so absent in the original design. “We designed an open plan for the kitchen, dining and living area,” Walsh explains. “It’s L-shaped so that you can see Knocknarea out through the corner window. We also built a butterfly roof because the house is north-facing at the back, which is the elevation where you get those spectacular views. The butterfly roof allowed us to bring in morning light through high level windows on the east, and evening light though high level windows on the west.”

He points out that a standard A-type roof would have made it difficult to get sufficient light into the space, and that the butterfly roof had the added advantage of creating a more interesting profile. In the same vein, Sherlock wanted something more than a simple rectangular extension out the back.

“I wanted to make it a bit interesting from the road. That’s why we put on the red cedar cube. We could have gone straight out into the back garden and put nothing on the gable, but that would have left us with one big rectangle. Instead, we went a certain distance out into the garden, then added that cube. My vision was that that was going to be our sitting area in the evening. I just didn’t want to be sitting in a corner of a big square box. I wanted to put a bit of a twist on it.” 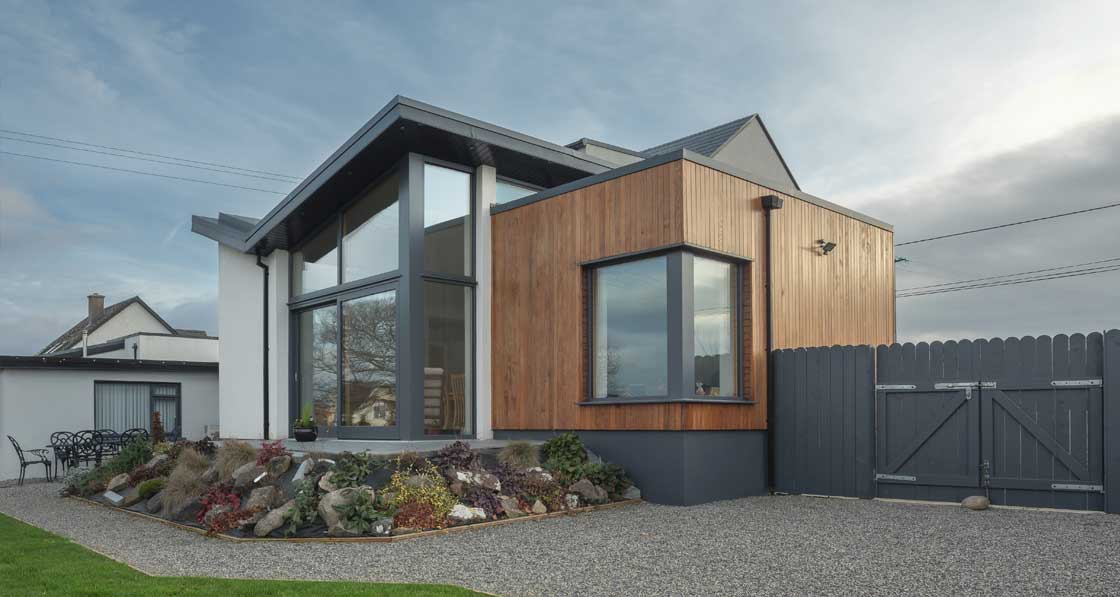 The butterfly roof allowed us to bring in morning light

With so little to be salvaged from the original house, the build team removed the roof and broke the structure back to the walls. The existing raised timber floor was also removed, allowing the installation of a new, well-insulated floor, together with an underfloor heating system.

When contractor Dermot Dunne examined the walls, he discovered that they were not entirely insulation free. At some point in the building’s history, someone had pumped in insulation. Unfortunately however, it turned out to be some form of formaldehyde.

“I couldn’t put a definite date on it,” says Walsh. “I’d read reports of issues to do with toxicity and off-gassing with this type of insulation. This probably would not be an issue because it had very likely been in place for more than five years. The other problem however was that it had shrunk in places, and I didn’t want to run the risk of leaving voids in the cavity. We got a specialist company in to suction it out, we cleaned it and then got it re-pumped.” 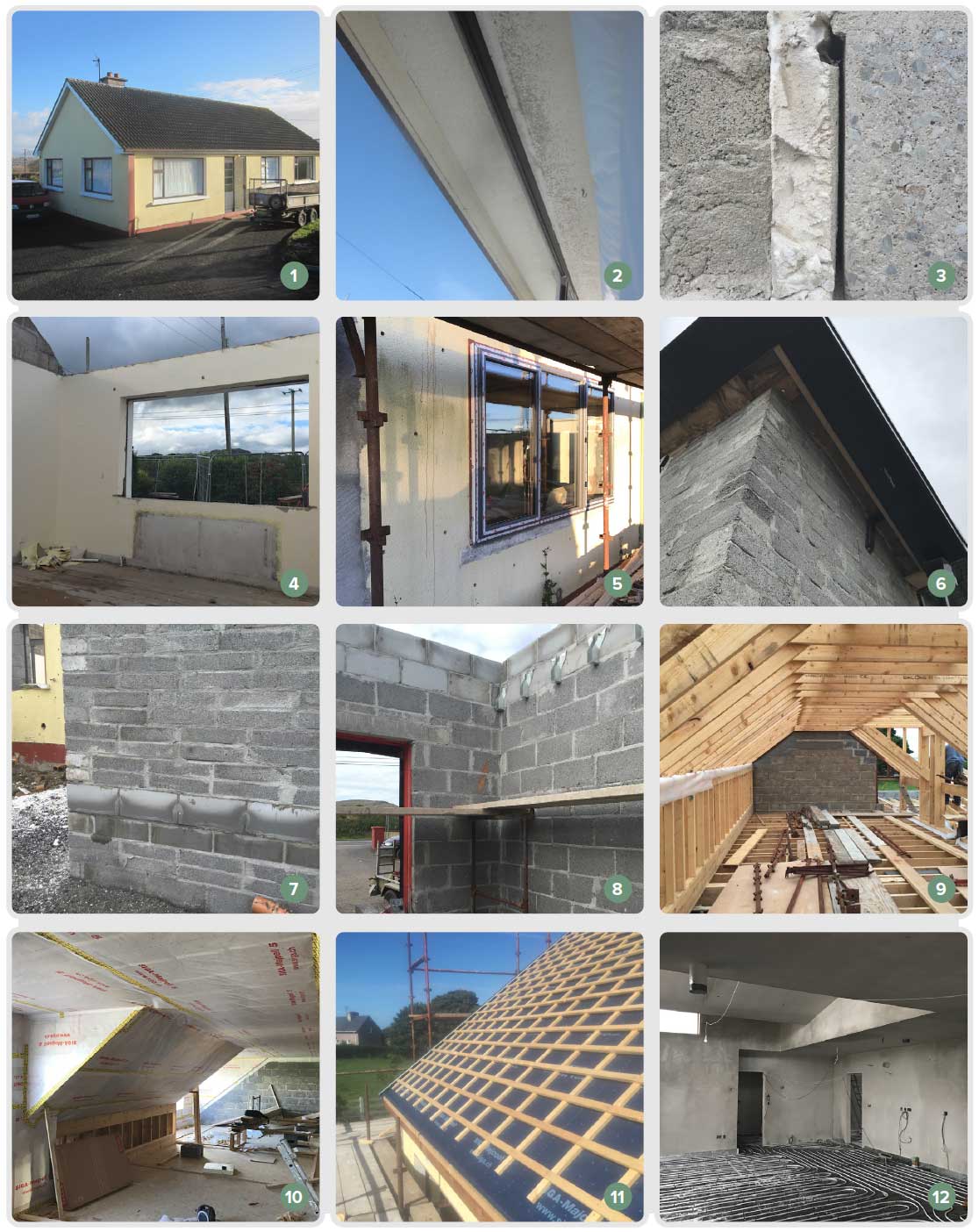 1 The existing 1970s bungalow prior to retrofitting; 2 the house suffered from mould problems; and 3 had urea-based insulation in the cavity; 4 the old roof removed and the house stripped back to the structure; 5 installation of new triple glazed windows; 6 gap left under the eaves for external wall insulation, which would meet the roof insulation; 7 & 8 Mannok thermal blocks, which are lighter in colour, were deployed at key junctions to prevent thermal bridging; 9 construction of the new roof underway; 10 SIGA Majpell airtightness membrane and taping; 11 SIGA Majcoat wind-tight breathable membrane to the roof; 12 underfloor heating was installed on both floors.

In order to bring wall U-values up to spec, and to help eliminate cold bridges, external wall insulation was also added. Contractor Dermot Dunne had not installed external insulation before, but he registered with the SEAI as an installer and took guidance from the supplier before installing 150 mm of Baumit Graphite EPS.

Thermal bridging is often a headache in retrofits. Here, in addition to the external insulation, the build team deployed thermal blocks at key junctions in new external walls, ensured insulation ran below the level of the perimeter path outside the house, designed the eaves for thermal continuity, and ensured the windows sat within the insulation zone. Sherlock was also keen to have underfloor heating throughout the house, so the engineer specified a very dense grade of timber for the flooring (dense timber conducts heat better) and installed a screed in the first floor too.

Installing ventilation ducting in restricted spaces was another challenge on the build, as of course was airtightness. In meeting all these challenges, James Walsh talks about the crucial importance of getting sequencing right at the planning stages in order to ensure that insulation and airtightness measures are not adversely impacted after they have been fitted. 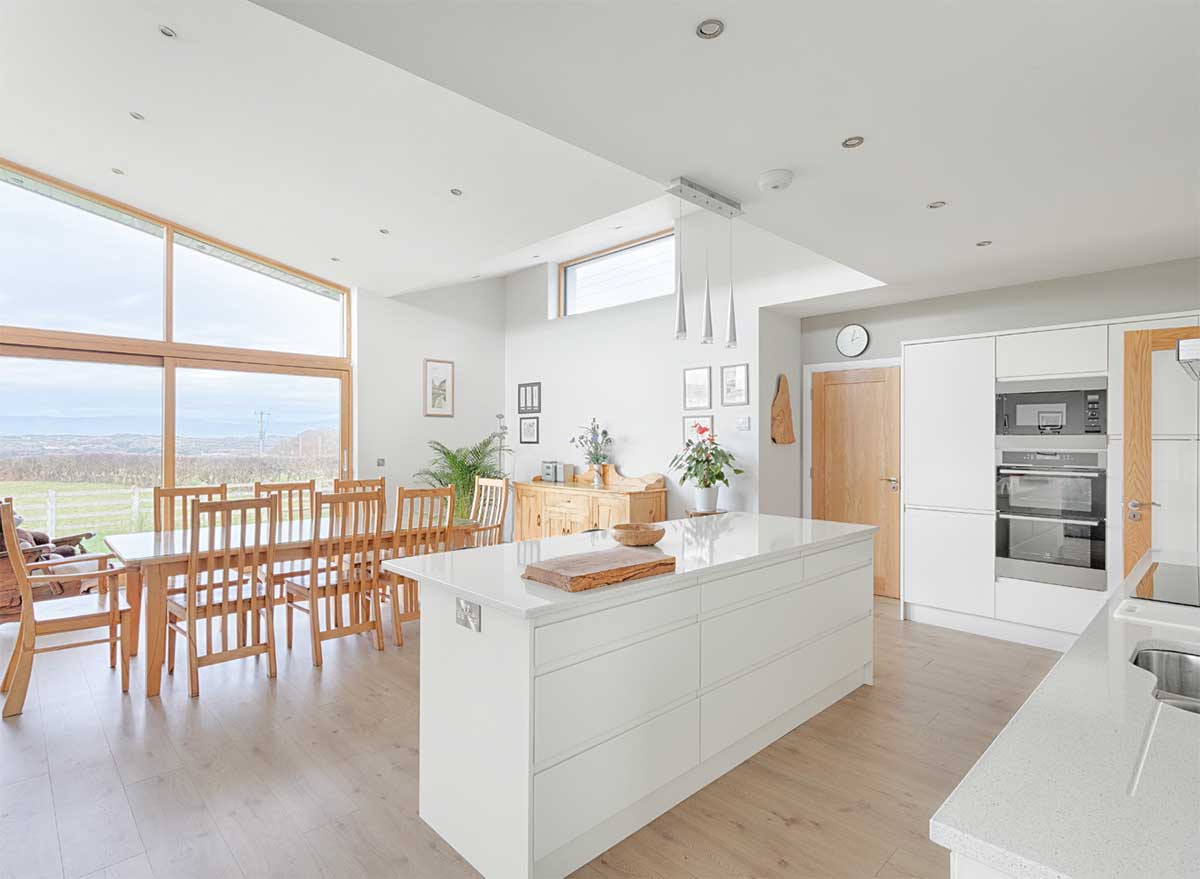 “It wasn’t the case on this house, but I’ve done a number of jobs where, for example, you’re putting insulation in the ceiling, and afterwards, the plumber realises that an additional pipe has to go in. They might lift the insulation and then fail to put it back properly. Those kinds of things do happen,” he says.

Getting everyone on site conversant with insulation and airtightness targets is another great way of ensuring that no one does anything to compromise them. On the aforementioned St Bricin’s passive retrofit scheme, Walsh says the success of that project owed a lot to the fact that onsite training was provided for all of the tradespeople involved.

On this project, it is interesting to note that the best views and the extensive glazing lie to the north of the house. “Before we started,” says Derek Sherlock, “I used to think, ‘God, if those views were on the other side of the house, we’d have all of this lovely sun in the living room’ but I realise now that we just couldn’t have lived with that... the glare would have meant that you would have had to have blinds on the windows and would have had no comfort sitting there.” He also thinks that unimpeded glazing on the south elevation would have caused overheating.

James Walsh says that there was no major thermal loss a result of having these glazed sections to the north. “The north facing glazing was a deliberate design decision,” he says, “to take advantage of the magnificent views and slightly elevated site. As Derek was amenable to using triple glazed windows and doors with U-values of 0.8 generally, I knew that they would contribute to the thermal performance. That was reflected in the overall DEAP assessment and building energy rating. The wall U-values are predominantly 0.15 with some small sections at 0.13 and 0.17.” 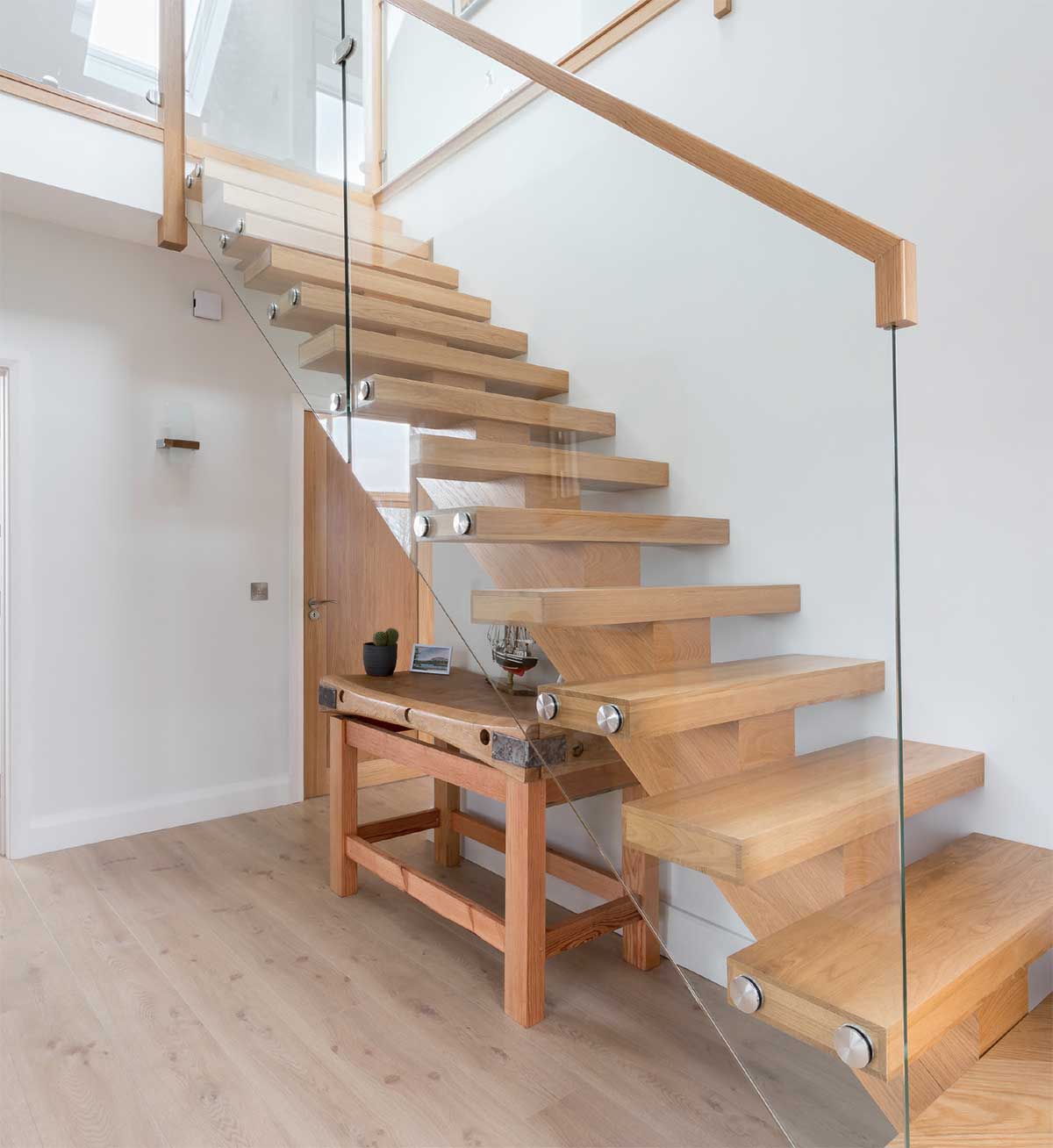 They had a double layer of curtains just to keep the heat in.

When it comes to costs, Sherlock confirms that he has been pleasantly surprised. “From June 2017, when we moved in, to June 2018, the total cost of all electricity – not just the heat pump – came to €1,120. Then from June 2018 to June 2019, it went up by €40 to €1,160. And the following year, it was up a little further, to €1,200.” He notes too that he “never touches” the Ecodan air-to-water heat pump. The thermostat has remained set to 21 C since he and his wife moved in. The increase in bills over the last two year he attributes to rising energy prices as opposed to increased energy use. “It’s fabulous,” he says, “just fabulous. We love it here.”

Energy bills: The client reports an average annual electricity bill (covering all energy use in the house) of €1,150, or €95 per month. The DEAP assessment of the house projected a delivered energy demand for space heating of 1,085 kWh/yr or 5 kWh/m2/yr. According to the cheapest available tariff available from Bonkers.ie, this would cost €203 including VAT at 13.5 per cent, or approximately €17 per month. This does not include standing charges or the PSO levy.

Before: No ventilation system. Reliant on infiltration, chimney and opening of windows for air changes.