It’s taken Mick Kiernan more than 10 years to upgrade his Cork bungalow, and it’s still not finished. But along the way he discovered the passive house standard and let its principles guide his way towards a warm, airtight and healthy home.

There are many pathways to passive house ‘enlightenment’ depending on whether you’re a contractor, an architect or a home-owner, but there can’t be many paths as long as Mick Kiernan’s.

The incremental transformation of his large detached bungalow in Clonakilty, Co Cork, from a cold and draughty property to a warm, comfortable, cheap-to-run home with airtightness close to the Enerphit standard was achieved by a practical yet systematic problem-solving approach over a period of some ten years. 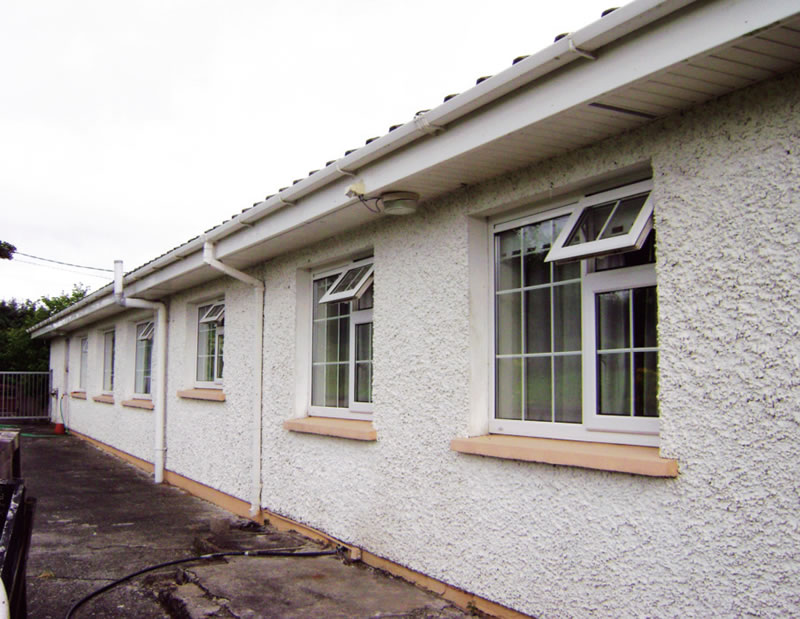 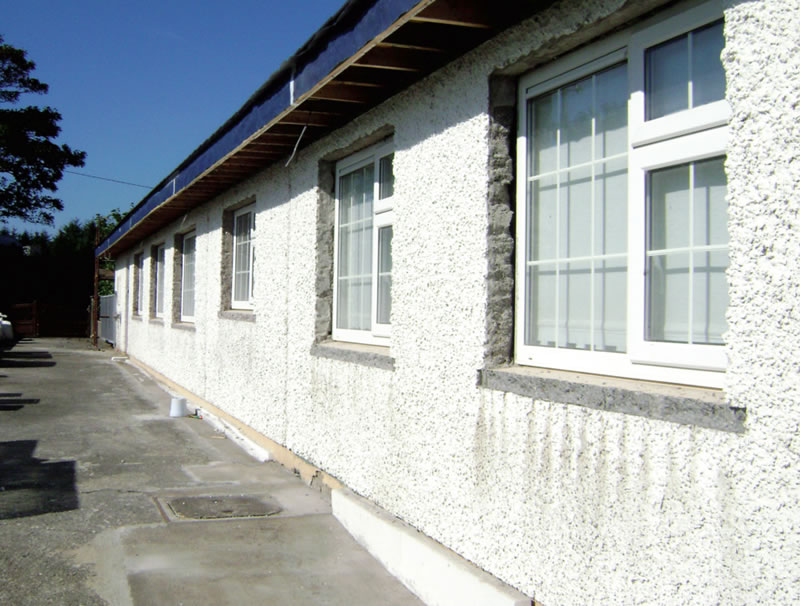 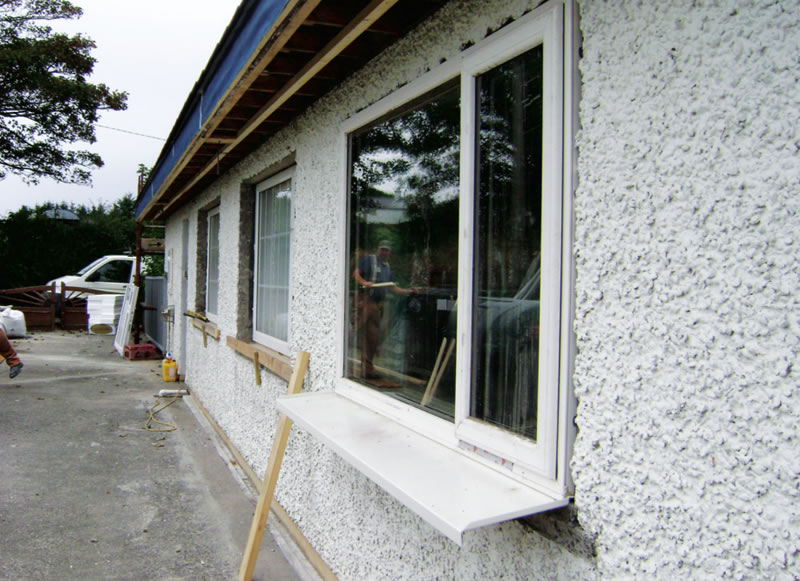 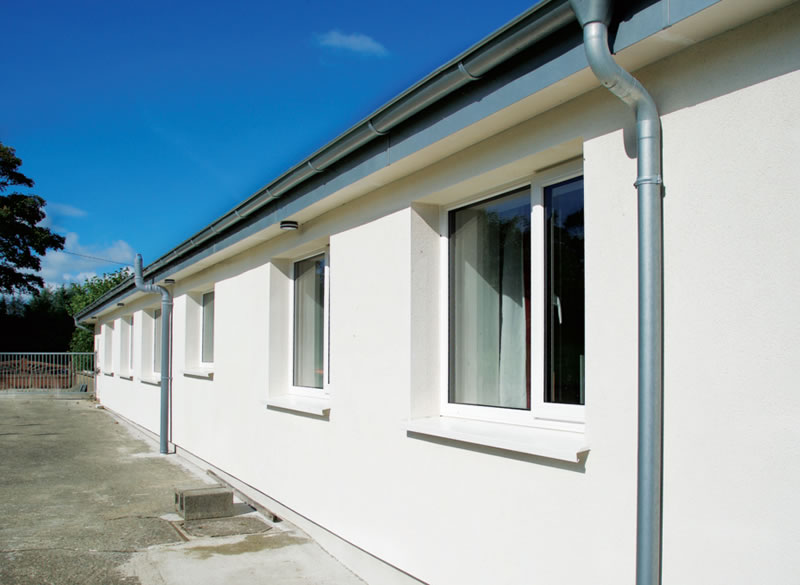 The new triple-glazed windows were moved out to be flush with the original outer leaf, and then the external insulation was installed, as shown in these before and after photos

“Both the house and I developed at the same time to a certain extent, because a lot of the problems people would have renovating was stuff I also came across, investigating, researching and solving,” says Kiernan.

It helps, of course, that he works as a domestic energy consultant with his own company, Rebel Energy, and counts certification as a passive house consultant among his qualifications. But he didn’t start out ten years ago aiming to build a passive house — he only stumbled across the concept later through his interest in building physics.

In addition, Kiernan has rigorously measured the before-and-after effects of the key phase of the work (which began after 2010). This is experience worth taking note of if you have an interest in retrofit.

When Kiernan and his wife Ann bought the 1970s 210 square metre property as a fixer-upper in late 2003, shortly after moving to Clonakilty, he was aware it came with many problems. It had an old and poorly fitted boiler, leaking copper pipework, and poor insulation, airtightness and ventilation. 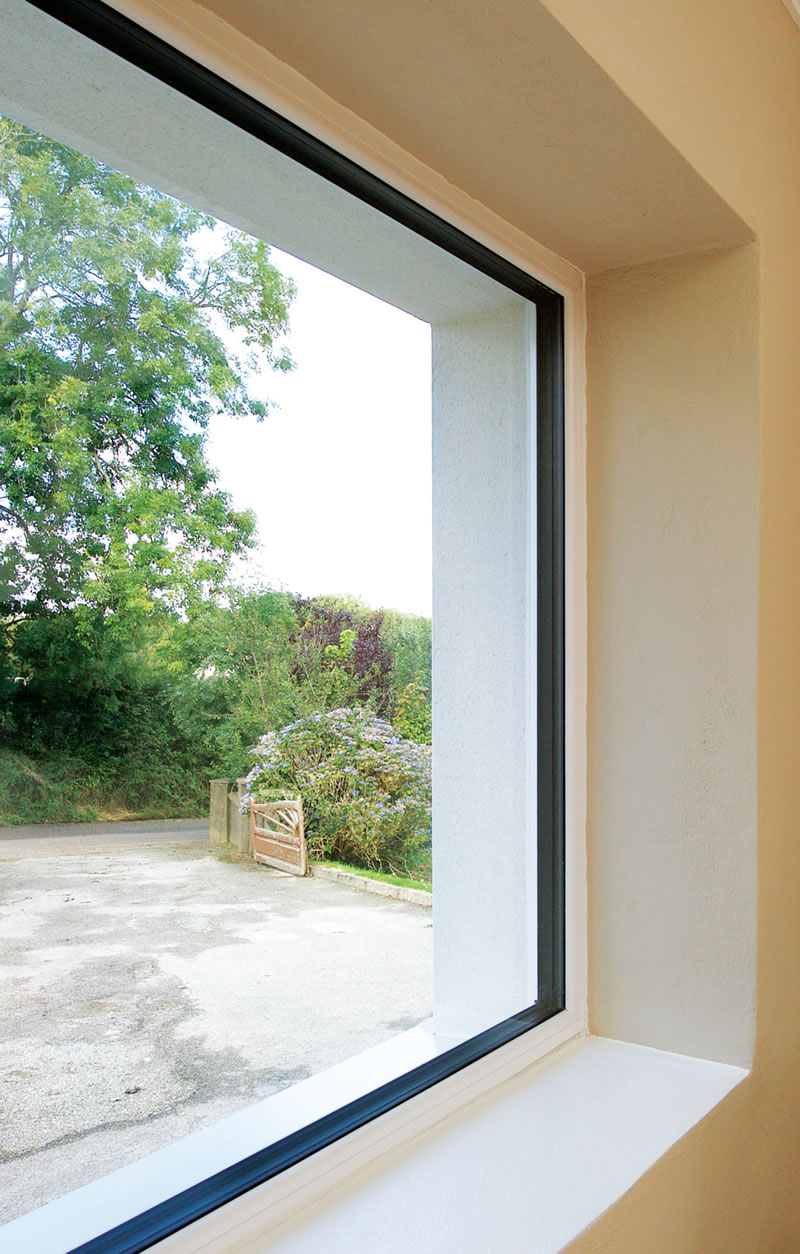 Kiernan now believes that poor airtightness – most pointedly at large recessed ceiling light fittings in all rooms – meant the house struggled to reach 17 or 18C, even with the heating system on all the time. “I remember a postage stamp size piece of paper being swept from the palm of my hand and up through a fitting when my hand was about a foot away from the fitting.”

This sort of first-hand experience of the building’s poor performance informed the upgrade process. “Our plan was to live in the house for at least all four seasons and then decide on the works.” In the interim, he installed a 7kW multi-fuel stove and added 100mm of fibreglass insulation in the attic “to make the house somewhat liveable while we decided how we would remodel the interior”.

By 2005, they figured out what they wanted to do besides the interior remodelling and re-wiring, and this included completely new plumbing, the relocation and replacement of the old oil boiler with a more efficient model, the replacement of all radiators and valves, new ceilings, and an extensive upgrade of the heating controls. 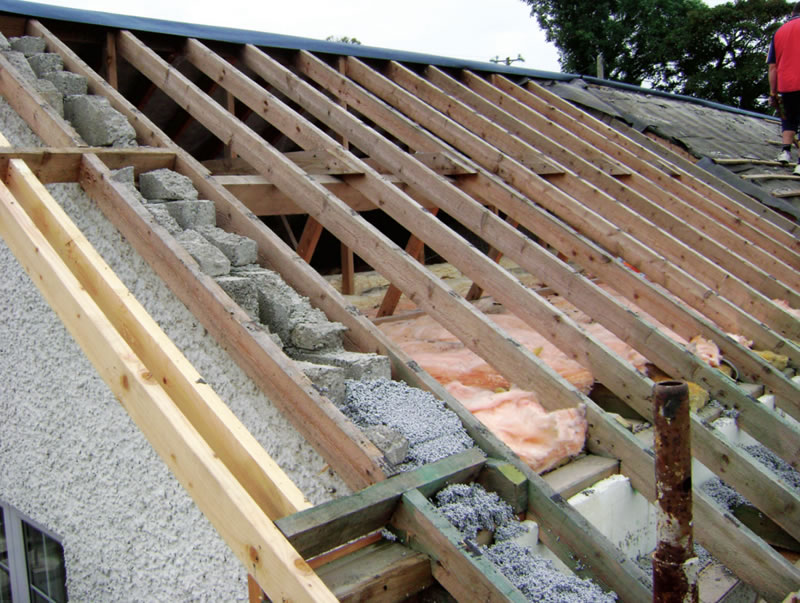 the old roof tiles were stripped off, and replaced with new clay tiles over a Siga Majcoat wind-tight membrane

“The following winter, the house went from being unable to be heated past 17C or 18C, to heating up to a comfortable temperature in 30 minutes and I thought, ‘happy days’,” says Kiernan. But Kiernan soon became aware of the house’s poor indoor air quality.

“I soon discovered that the house was severely under-ventilated and so researched how best to ventilate,” he said. “It was while doing this that I started to read up on all things to do with the wonderful world of building physics, how one thing affects the next etc, and the different mechanics of heat loss and their effects.”

After researching ventilation systems he decided to opt for MVHR (mechanical ventilation heat recovery), and installed a system in his attic from Irish manufacturer Proair Systems, which had a “stark and immediate” effect on indoor air quality.

It was at this point he also trained up on airtightness testing and thermal imaging surveying, and then tested his own house, which came back with a respectable result of 3.5m3/hr/m2 at 50 Pa. Kiernan says that aside from his decision to slab and plaster the ceiling, the building had some favourable aspects with regard to airtightness. Original external walls were wet plastered when built, and the building’s simple shape may also have helped.

Kiernan did more research, which led him to learn of the passive house concept and its “demand for attention to detail, especially around the building fabric”. 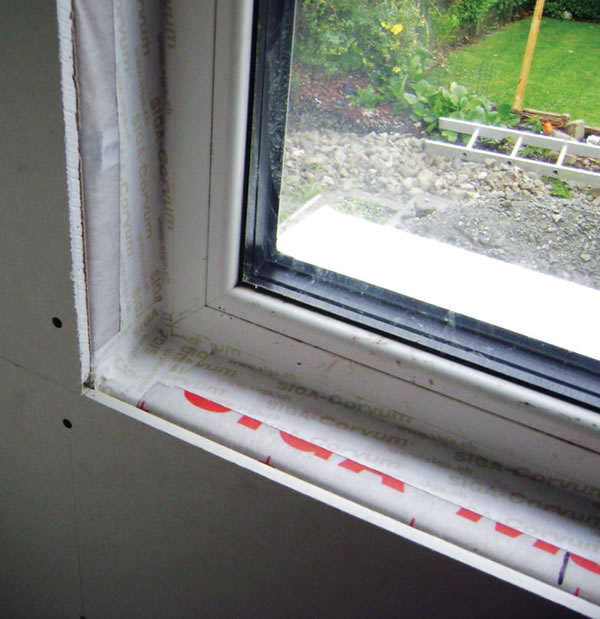 He trained as a passive house consultant in 2009. “A natural follow-on was to model my house in PHPP and see what could be done to bring the house, while comfortable enough, as close as practical to passive,” he says. The only restriction was that the ground floor had to remain untouched — the family didn’t want to move out, and Ann was keen to keep their existing floors.

Kiernan had a plan by 2011, but he is scathing about how much time he subsequently wasted in trying to find a contractor who understood what he wanted. “I have lost count of the number of so-called low-energy builders I interviewed who didn’t understand the concept of a thermal bridge, airtightness or building physics.”

Kiernan finally met contractor Tim O’Donovan of Sustainable Building Services, whose buildings have achieved some of Ireland’s best airtightness results, at a nearly zero energy building (NZEB) open day event in 2013. O’Donovan had just completed a passive house retrofit for Doris Knoebel in Clonakilty (as featured in issue 7 of Passive House Plus). “Mick was one of our visitors and he saw what we were doing there,” say O’Donovan. “He knew what he wanted to do since he’s an engineer himself and had been looking for someone to do the work for him, so he commissioned us then.”

The match sounds like it was destined to work out well given both parties’ strong belief in doing things properly and thoroughly. O’Donovan says: “It’s the old adage of do it once and do it properly and not have to go back, and Mick was very much of that mindset, which is fantastic.” So with this meeting of like-minds, the building fabric works began in July 2014, and went on for six months. As part of the latest upgrade works, Grainger Energy Solutions externally insulated the walls with high density Rockwool. Kiernan had previously hoovered loose fill polystyrene bead from the wall cavity and had it fully filled with platinum bead.

O’Donovan replaced the old concrete roof tiles and felt with new clay tiles and a Siga wind-tight breather membrane, while some rafters were re-aligned and box-ends re-constructed. The floor of the cold attic was also heavily insulated with cellulose above the existing joists, and the new external wall insulation rises up to meet the attic insulation.

The new triple-glazed windows were also set flush with the outer wall and airtightened against the inner leaf walls, while the external insulation also wraps the window frames. The before and after pictures of the house reveal how much more modern it looks now, with its smooth acrylic rendering.

“There was a definite emphasis on making the look of the house more contemporary,” says Kiernan. “I paid a lot of attention to which windows didn’t need an opening sash — for practical or fire safety purposes — because as windows can be the poorest performer for heat conduction of any wall, I wanted to optimise each opening.” 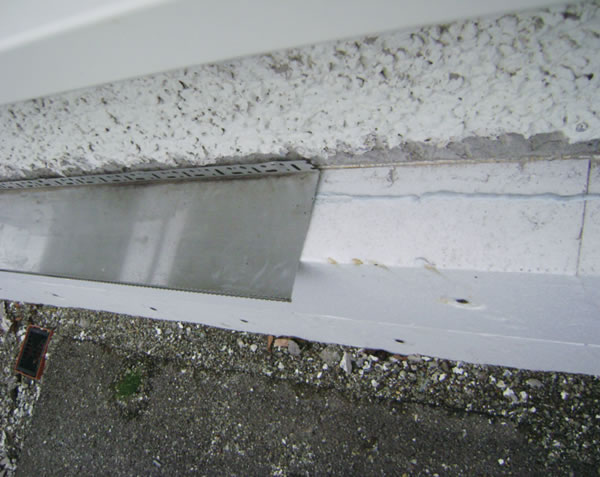 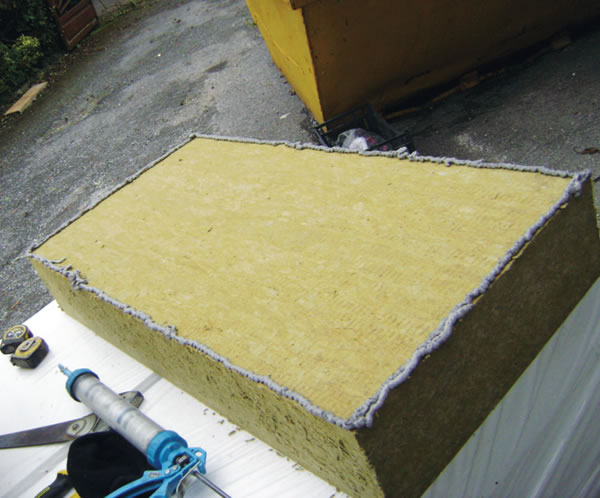 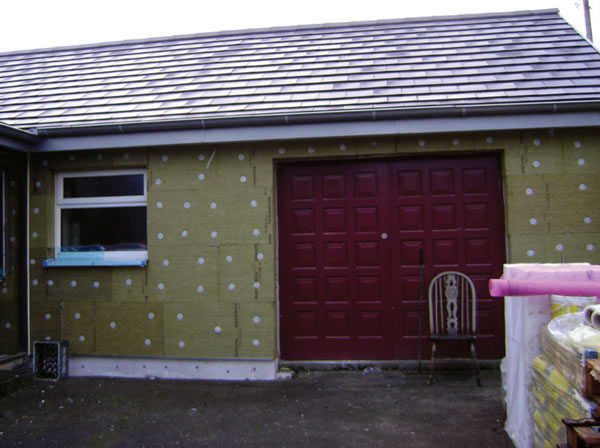 The walls are externally insulated primarily with 200mm high density Rockwool, though moisture-resistant polystyrene is used around the perimeter down to 600mm below finished floor level

Kiernan has been carefully monitoring his house’s energy performance since 2010, as much for personal as professional reasons. It started with an hour meter on the conventional oil boiler, which he installed in a bid to determine whether it was more economical to run the heating periodically or continuously. But he has now extended this to monitoring the internal and external temperatures, and relative humidity, at five-minute intervals.

“I subsequently continued monitoring the house, initially from personal curiosity, but the gathered data is very instructive for helping explain the inter-relationships between heating, ventilation and moisture load to clients.”

So with the accumulation of all his data, what’s the verdict? “As the [building fabric] works are not yet a year complete I don’t have enough data to do a complete pre and post works comparison, but a couple of things have become clear: the general feeling of comfort in the house has improved very significantly with very little energy input.”

“When the data is in I wouldn’t be surprised to see a reduction of at least 65% in oil usage from pre the deep retrofit, and more than 90% from when we moved in in 2003. And the stove has become largely an ornament.”

As for airtightness, that’s still a work in progress, but advances have clearly been made as it is down to 1.4m3/m2/hr, compared with 3.5m3/m2/hr previously. Kiernan expects to hit the Enerphit target of 1.0 ACH at 50 Pa but the building’s space heating demand is almost double the Enerphit target of 25 kWh/m2/yr – perhaps owing to a far from ideal form factor. The building’s 210 sqm of floor area is spread over a considerable area, meaning a significant amount of external surfaces through which heat can escape, in spite of the high spec fabric.

And in terms of the cost? The total cost – for a renovation project which goes far beyond energy, including a new roof, electrics & drainage system – came to around €100,000 but there were “few surprises” thanks to the time taken to detail out the project, according to Kiernan. “In fact, the budget was helped by being able to trade-in my old roof tiles and I even managed to sell the conservatory online.”

And aside from anything else, he says: “You can’t put a price on quality of life”.

Budget:€100,000 (including non-energy efficiency measures such as overhaul of electrical supply, new roof covering and rafter re-alignment, re-arrangement of foul and rainwater pipework)

Electricity: Plan to install a substantial PV array on south roof in future 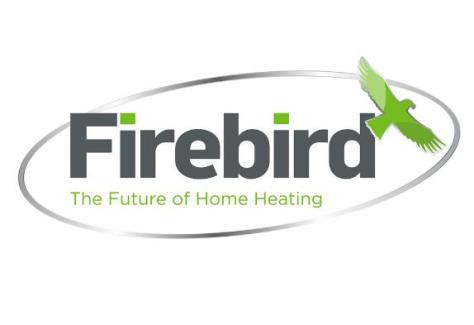 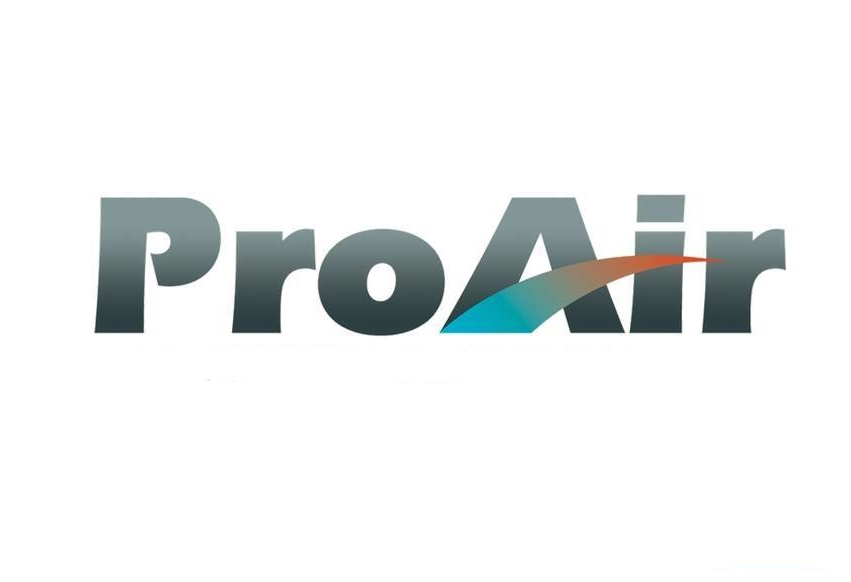