Built in the 1970s, Rochestown House was a cramped, cold and damp social housing block in Sallynoggin, Co Dublin that has now been completely transformed, thanks to a deep energy retrofit inspired by passive house principles.

Can decades-old concrete flats be raised up to anything like the passive house standard? This was precisely the question faced by Dún Laoghaire-Rathdown County Council in Dublin when it came to retrofitting the Rochestown House complex in Sallynoggin.

A pair of low-density social housing blocks built in the 1970s — and catering primarily for the elderly — Rochestown House presented some of the archetypal challenges of social housing retrofit: the residents didn’t want to move, but the properties failed to meet anything like adequate standards of airtightness or insulation, and needed a major overhaul. 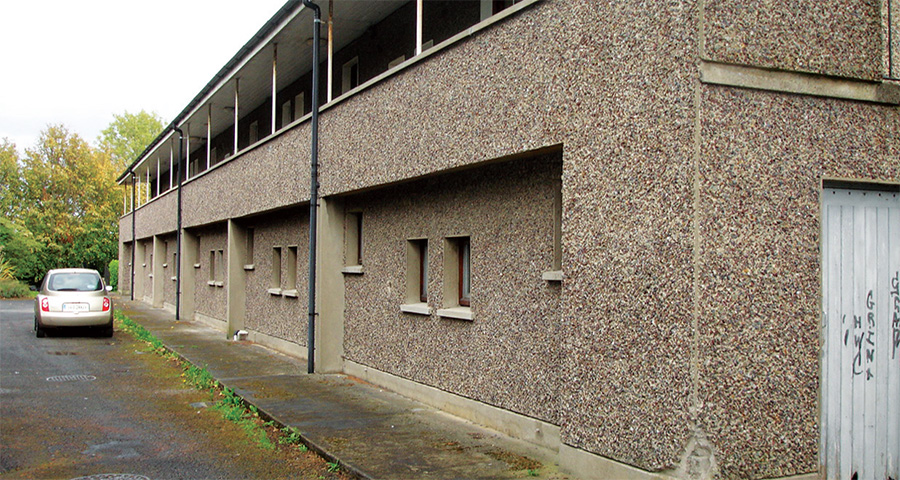 Before and after photos highlight the transformation of the social housing block. As there was no insulation at all before, one of the main changes was the addition of Parex Lanko EPS external insulation with mineral render finish. New double-glazed timber windows and doors also replaced the existing single-glazed units

A survey by consultant engineers Hanley Pepper got the process underway — and its findings were not good. It was discovered that there was insufficient ventilation and natural light in all ground floor units; while steel sections at balcony level were rusted and in need of repair.

Repair was also needed to various elements of the porches, window sills, and drainage, while re-tanking was recommended for the block’s balcony level. Asbestos was also found on-site. All-in-all, not only was the building envelope insufficient, but there was potential for serious health issues.

Work on Block 2 began in April 2013, and was completed by December of that year. The second phase of the project — currently underway — will now aim to upgrade the larger Block 1 to Enerphit, the Passive House Institute’s retrofit standard. But even though Block 2 didn’t aim for Enerphit, it still applied fabric-first principles of generous and continuous insulation, airtightness, and proper ventilation.

Block 2 is a two-storey concrete block building with a pitched roof. Its cavity walls were completely uninsulated prior to renovation. The orientation of the block is north-northwest to south-southeast. All of the flats were dual aspect, however the ground floor units had their living accommodation to the north elevation. Also, due to the existing trees and vegetation on the site, solar gain is limited. 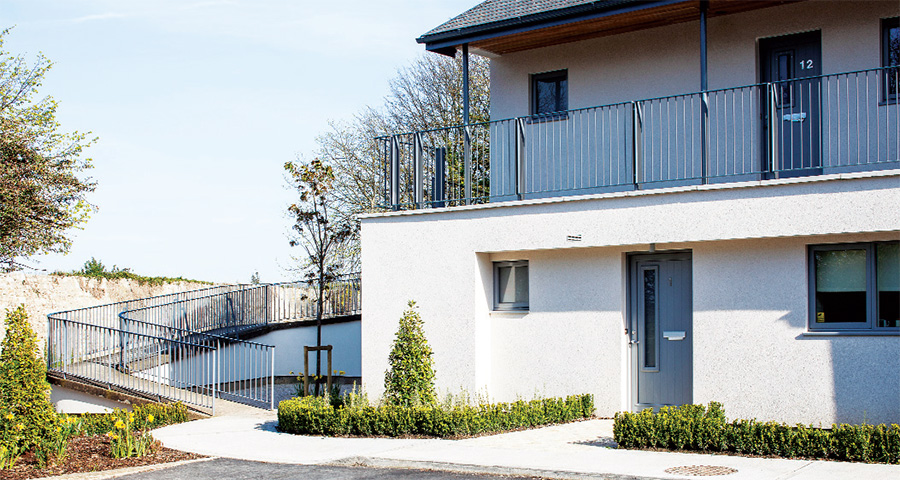 A building energy rating (BER) assessment by Michael Hanratty of IHER Energy Services revealed much room for improvement: out of five sample units over the two blocks, four were rated G and one was rated F.

The accommodation was also partly in conflict with rules on dwelling size: aside from the six upstairs one-bedroom apartments, Block 2 had 12 bedsit apartments, a form of dwelling outlawed under regulations that came into force in February 2013 after a two-year lead-in period, following legislation drafted by the Green Party, partners in Ireland’s previous coalition government.

Dún Laoghaire-Rathdown County Council’s architecture department undertook design of the refurbishment in-house, coming up with a series of proposals comprising general refurbishment, expansion of the bedsits, and a significant energy upgrade.

“Since the [recession-led] funding cuts we’ve not had the funds for new-build [but] we’ve always had a refurbishment programme,” says Sarah Clifford, architect with Dún Laoghaire-Rathdown County Council.

The low, outdated standard of accommodation at Rochestown House made its renovation a priority— and offered lots of low-hanging fruit for energy upgrade. “Our aim wasn’t [specifically] Enerphit but it was to do the best refit that we possibly could,” Clifford says. “We really needed to upgrade the existing accommodation; it was very damp.” 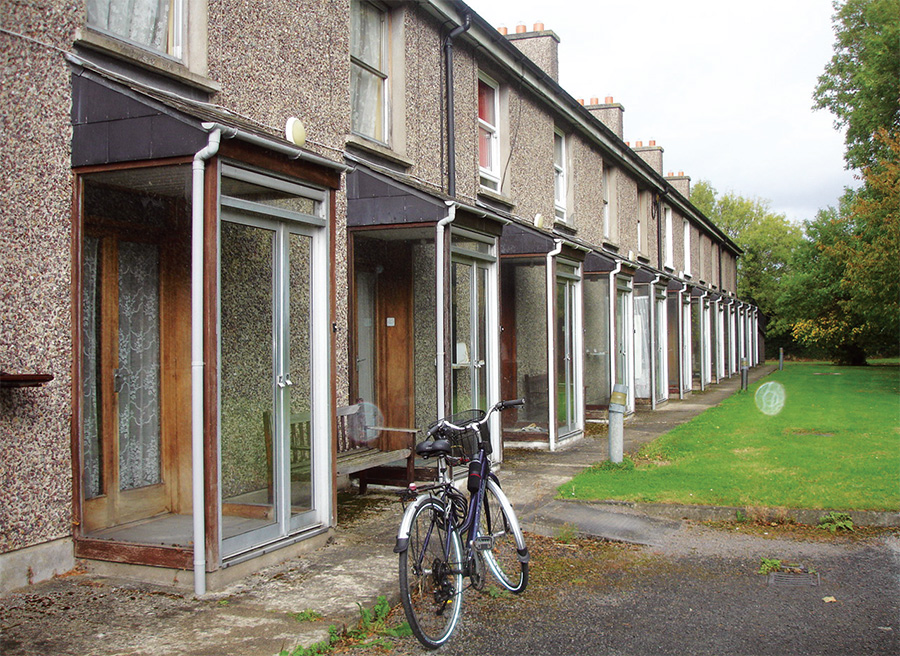 Nonetheless, it was with some trepidation that the initial survey was undertaken. “You’re never 100 per cent sure what you’re going to come across in a retrofit. You have to deal with whatever is there.”

In the end, what they did come across was the need for serious remedial work. The bedsits in particular, at this point unoccupied, were a particular problem, suffering from major dampness and mould growth problems. “The ventilation was practically non-existent in them,” Clifford says.

This is hardly unusual for building of the era, but it presented a particular problem given the requirement for much more insulation. Without due care to ventilation, key energy upgrade measures such as blocking up chimneys and making the building more airtight would have risked further promoting damp and mould growth. A demand-controlled mechanical extract ventilation system from Aereco was chosen to address this, combining central mechanical extract fans in each unit with humidity-sensitive wall vents in rooms, to ensure that ventilation rates reduce when rooms are unoccupied, thus preventing unnecessary heat loss.

Meanwhile the antiquated existing oil-fired district heating at Block 2 was removed, as were the individual hot water cylinders that took up valuable space in each unit. A new district heating system was installed, drawing from a Worcester Bosch condensing gas boiler. The new system foregoes storage tanks completely instead relying on instantaneous heating. Rather than use packaged consumer units, bespoke systems were made on site, including plate heat exchangers for hot water and motorised valves for space heating. The plant room is external to Block 2, and relies on Logstor preinsulated pipework to reduce heat loss before entering the building. A combined heat and power system was considered but rejected due to the lack of communal space around the block.

Despite the problems with the flats, such as single-glazed windows and a total absence of insulation, residents were nervous at the prospect of change. “The residents were unsure of the work; they were worried about having to move out, but they’re all happy now,” Clifford says.

The 12 unoccupied bedsits on the ground floor are now six occupied one-bed apartments, with their internal layout reversed, thus providing a south facing elevation in living areas in order to enhance solar gain. There are a further six one-bed apartments upstairs. 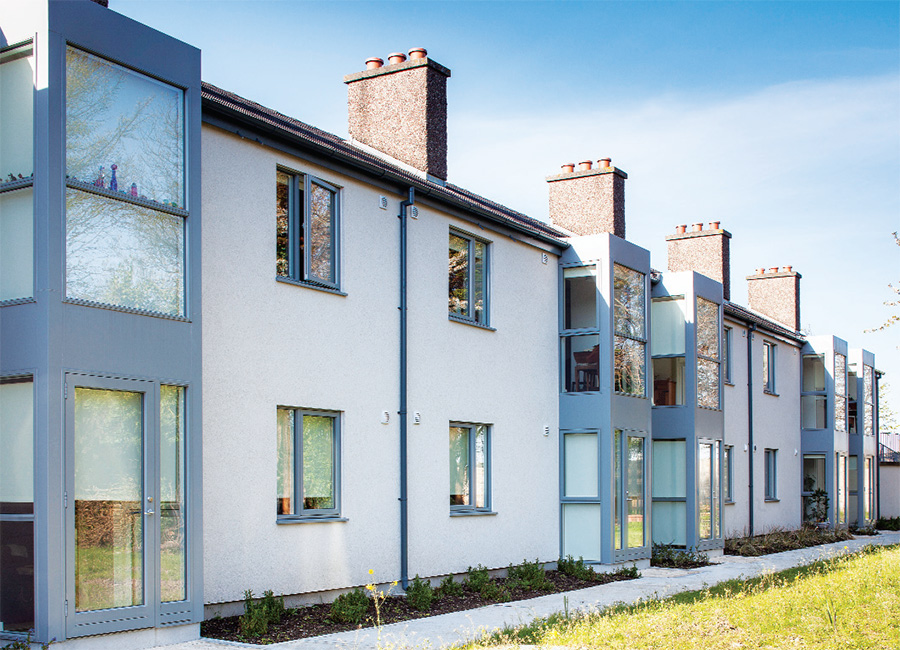 Scale was also an issue with the job, but not an entirely negative one: “Quite often the reforms we’ve done before would have been done in [small] lots, broken into packages, whereas with this we were able to it as a [single] job with one contractor,” Clifford says.

Kevin Enright, quantity surveyor at main contractor K&J Townmore Construction, downplays the difference between this job and any other, at least from the contractor’s point of view: there was a job to be done; and it was done.

“It was much the same, straight-up,” he says. “The spec was sent out and we had to work with that spec.”

The question of scale, however, did come into play: “It would be, at that level, a new thing for us. We’d have done elements such as mechanical and electrical and so on, but there was never a whole approach before and airtightness was one of the bigger tasks done. It was a high detail job.”

“I have no reservations [about working to the low energy specification]. I won’t say it was an easy job, but it was doable to the specifications laid out,” he says. ““The central thing was the external envelope.”

The addition of external insulation was one of the main changes—after all, this was a housing block with no insulation whatsoever before. A Parex Lanko system comprising 100mm expanded polystyrene with a mineral render finish was applied externally, while the cavity walls were pumped with polystyrene bead, a combination which brings the walls into the realm of passive house specs, with a U-value of 0.17. Meanwhile, 300mm of mineral wool was installed in the attics, bringing the U-value down to 0.18.

Double-glazed alu-wood composite windows and doors with an overall U-value of 1.4 replaced the previous aluminium single glazing throughout the block. To prevent cold bridging, the windows were bracketed out from the blockwork, to form a continuous thermal layer with the external insulation.

Ventilation
Before: no ventilation system. Reliant on infiltration, chimney and opening of windows for air changes / holes in walls.
After: Aereco demand-controlled ventilation to each unit. Humidity sensitive wall-vents to prevent heat loss associated with over-ventilation.