The abandoned husk of a 1960s school building sounds a very long way from a comfortable, ultra low energy family home. Thanks to a remarkable upgrade effort – influenced by reading Passive House Plus – one Fermanagh family are reaping the rewards of one such transformation.

This article was originally published in issue 15 of Passive House Plus magazine. Want immediate access to all back issues and exclusive extra content? Click here to subscribe for as little as €10, or click here to receive the next issue free of charge

Gerry McPhillips made it clear from the outset that his new home wasn’t merely going to meet Enerphit, the Passive House Institute’s standard for retrofitted buildings. It was going to be certified that it met the standard.

This was a particularly ambitious aim for several reasons. For one thing, the building into which he planned to move his family once the job was complete wasn’t even a house. It was a disused school. Achieving passive standards on a new build is tricky enough. Retrofitting passive into an old one is even trickier.

When you also factor in the lack of any passive building experience on his design and build team, the fact that this is Northern Ireland’s first Enerphit project is even more creditable.

“You can’t call it a passive house unless it’s certified,” says McPhillips, explaining his thinking, “but that isn’t the biggest reason I went for it. Probably the main thing – and this was mentioned in lots of the blogs and articles I read – is that it keeps people honest.”

He points out that if you make it clear that the house will be certified, the targets solidify. An airtightness result of below 1 ACH at 50 Pascals is not a nice-to-have. It must be that airtight in order to achieve certification. 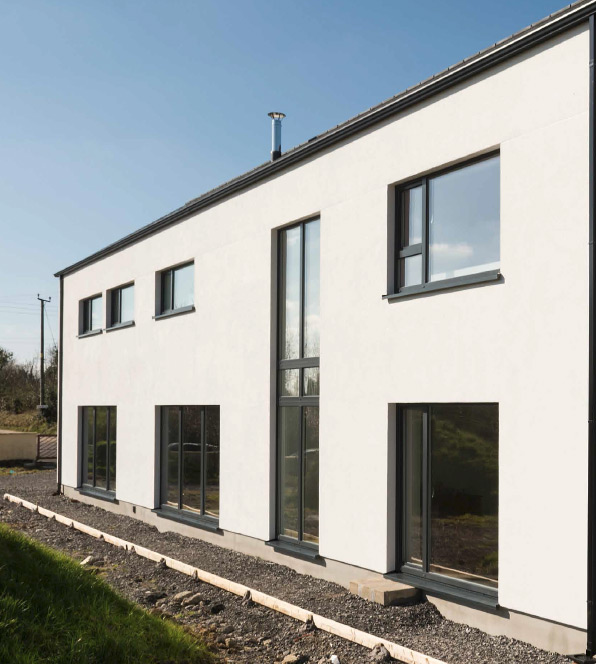 “When we tell the project manager that at the start, he knows what he’s aiming for. He takes on the responsibility to meet that target... Otherwise, you get the ‘ah sure it’ll be grand approach’. That was the main reason for saying yes, it is getting certified, it has to meet this standard.”

McPhillips had originally planned to build a house on his father’s land at Magheraveely in Co. Fermanagh. Planning restrictions however required that any new structure be ‘visually linked’ to the existing farm buildings, which essentially meant placing the house at the centre of a working farm.

This wasn’t going to work for the family, so they began looking further afield. It was McPhillips’ father who suggested looking more closely at his old primary school when it came up for sale in 2014. It had been closed down two years earlier as part of a rationalisation process that closed several other small schools in the area. 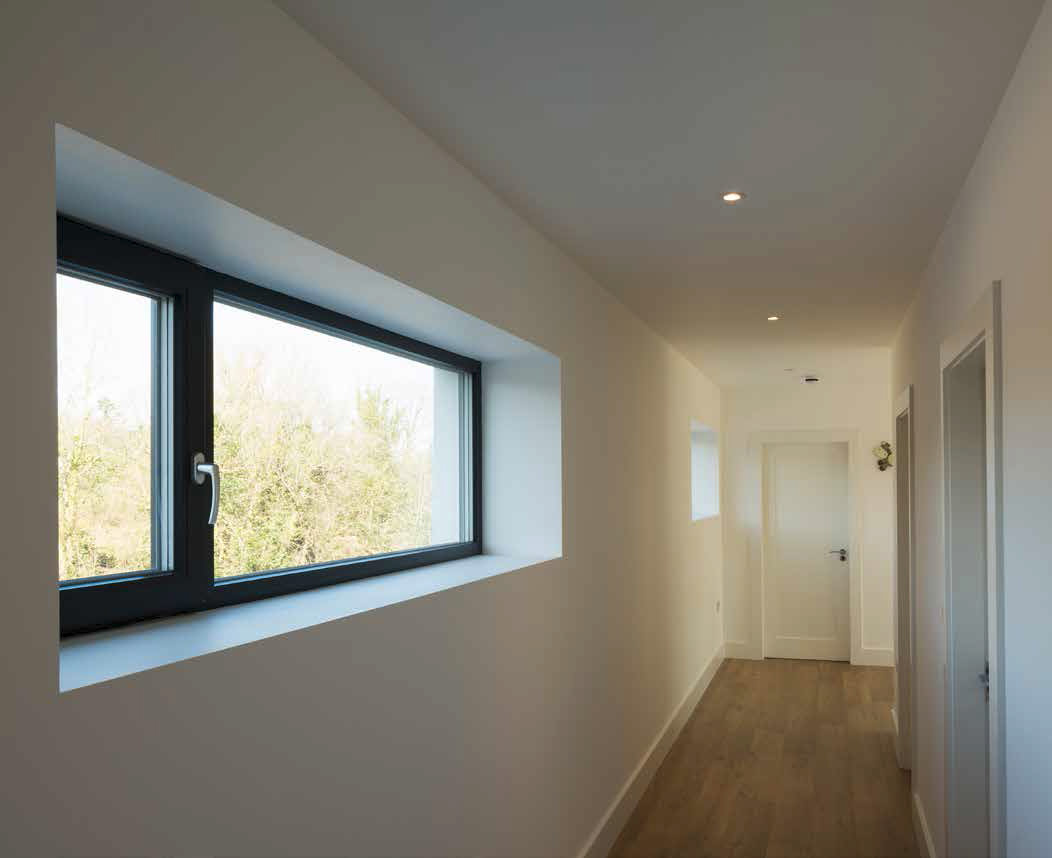 This was a typical 60s schoolhouse. An elongated, single-storey with huge south facing windows and extensive grounds. The one big advantage of the building was its location. It stood right at the end of the lane that led up to his parents’ farm.

“We knew before we bought it that the Planning Service wouldn’t look kindly on an application for demolishing an existing building in order to build a new one,” says McPhillips. “Essentially, they said we had to retain as much of the building as we could. That was our starting point.”

There was a certain amount of flexibility however. The school itself was beginning to slip into disrepair and the grounds had become overgrown. Aware of the need to create a family home from an old school, the Planning Service allowed McPhillips to strip the building right down, remove the roof and raise the walls.

The drive for passive emerged early in the project. As McPhillips worked through his research, searching for a way to keep running costs down, he found that he was consistently being drawn back towards low energy in general, and passive in particular.

“Passive House just kept coming up as the way to do it. It was a tested approach, one that had been around for twenty years or more. Everyone I talked to, and everything I read – including Passive House Plus magazine – encouraged you to believe that it could be done. The other thing in its favour was the fact that people in Ireland were doing it. It wasn’t just happening in Germany, there were plenty of examples and they weren’t that far away.”

At the time however, most of the passive projects either completed or underway were south of the border. There was a general lack of expertise in Northern Ireland.

Things were however changing in that regard. McPhillips had discussed other possible sites and projects with Enniskillen-based architect Chris Allen before he settled on the school in Magheraveely. When he returned to Allen to discuss his plans, Allen told him that he had already signed up with the Passive House Academy’s certified passive house consultant & designer course in Wicklow. The architect explains that this job was very different to any he’d worked on before. 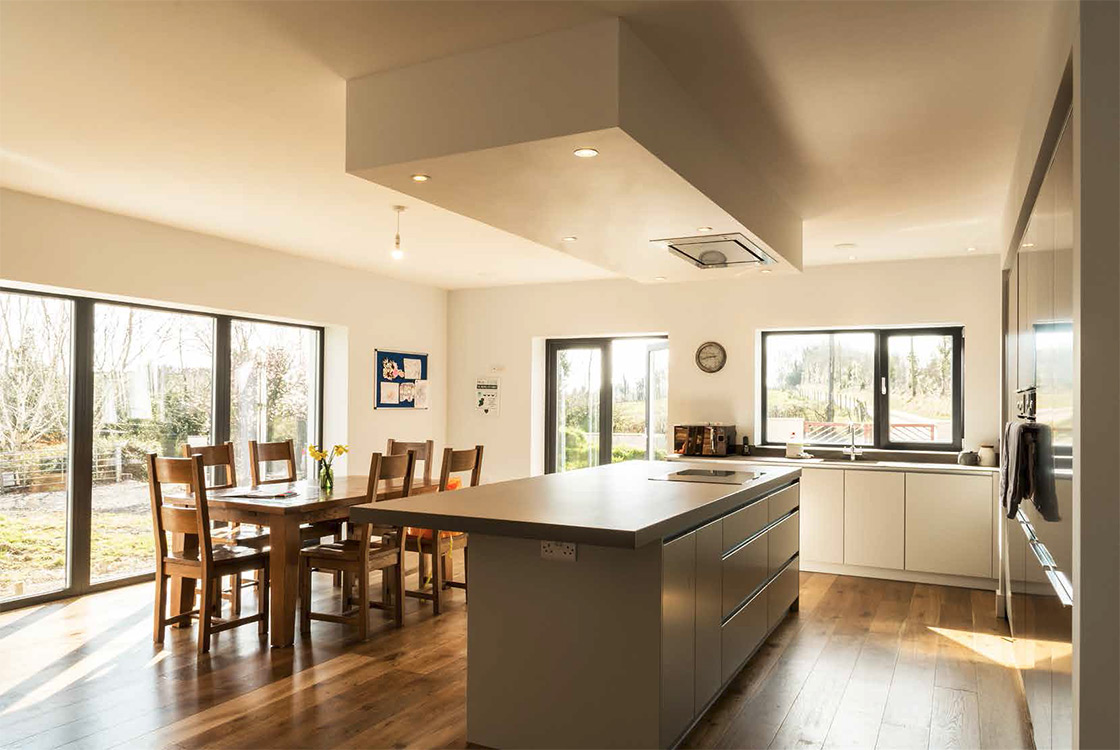 “Building regs in the north,” he says, “while they’ve improved in terms of what they require, as regards thermal properties, they’re very straightforward, very simple. The Enerphit approach looks at every aspect and is quite detailed in every aspect, so it was a major change, certainly.”

Together, Allen and McPhillips decided to remove the roof in order to create more height in the building. In addition to giving sufficient room to incorporate a second storey, constructing a new roof made achieving airtightness considerably easier by allowing the build team to incorporate airtightness measures into the new design.

Probably the greatest single challenge however lay in tackling the thermal bridges.

To help here, McPhillips sought advice from the Centre for Renewable Energy and Sustainable Technologies (CREST), which is attached to South West College in Enniskillen.

The centre – housed itself in a passive house pavilion designed by Paul McAlister Architects Ltd, which was the subject of a case study in issue 11 of Passive House Plus – supports innovative renewable energy and sustainable technology initiatives in Northern Ireland, and is partially funded by the European Union.

Barry McCarron of CREST explains that the centre supported the project by providing advice on the two critical passive areas of airtightness and thermal bridging.

“We carried out some analysis on thermal bridging and made some suggestions which were incorporated into the building,” he explains. Quinn Lite aerated blocks were set into the inner leaf at critical points, while ply boxes were specified for window reveals. As frequently happens with passive retrofits however, some puzzles just could not be solved.

“There was a huge thermal bridge that couldn’t be dealt with,” says McCarron. “It was a 17m internal wall, and we just had to take the hit on it. That happens, it’s just part of Enerphit, and it’s reflected in how the matrix of passive house is relaxed for it.” 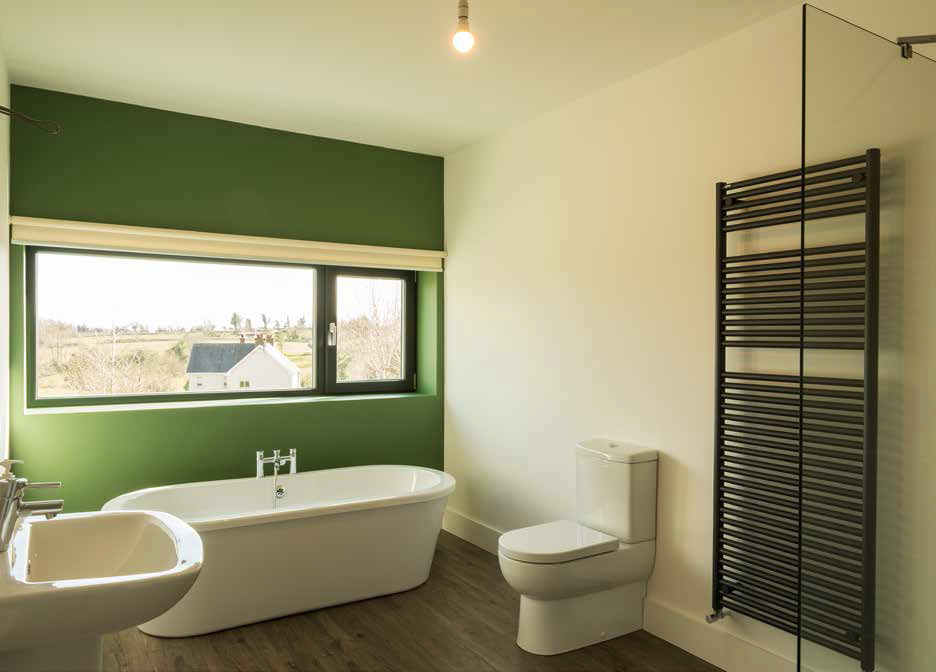 “Airtightness was one of the biggest challenges,” says McPhillips, “because it was new for everyone on site.”

Gerry’s brother, Stephen – a carpenter by trade – completed most of the airtightness work. In addition, both their father and Gerry’s father in law – both retired builders – pitched in on site with help and advice.

The final airtightness test recorded a result of 0.77 ACH at 50 Pascals – well within the Enerphit threshold.

Barry McCarron of CREST says that having a highly motivated design team more than made up for the lack of passive experience on site. “Chris was a very progressive architect, he was switched onto everything and he was very willing to work with us in solving any issues that arose... and Gerry was very keen to pursue the passive house thing. There would have been moments where cost decisions were being thrown about. His willingness to go all the way to get passive made those decisions easier.”

The existing narrow cavity wall had been pumped by the educational authority not long before the school had been closed, but even at that, it didn’t get close to the standard required by Enerphit. The design team decided to supplement existing insulation measures with external wall insulation. In addition to solving thermal issues, Chris Allen says that it also solved aesthetic ones. 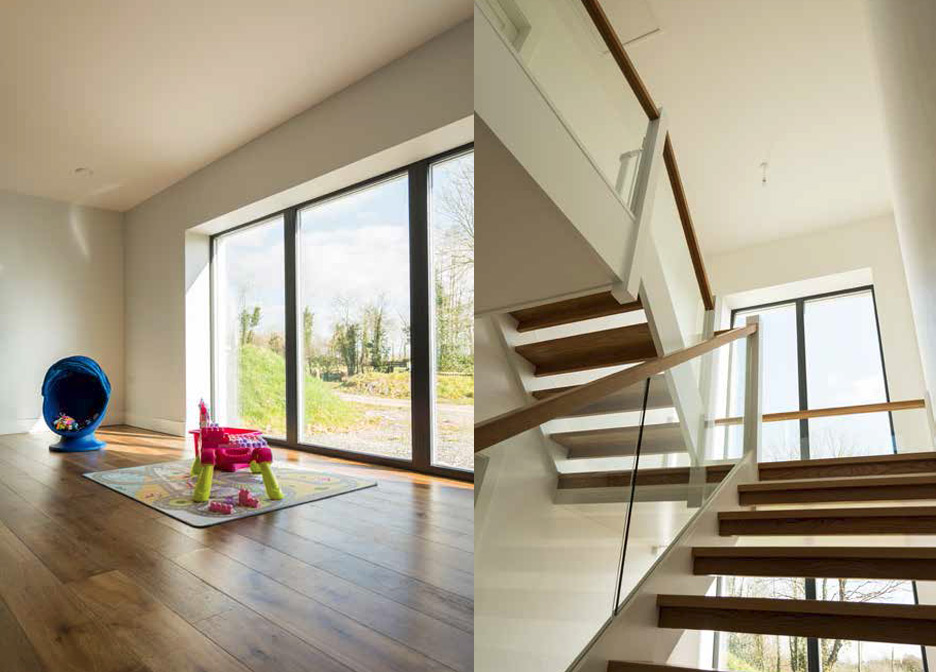 “Because we were increasing the height of the building and we were closing in openings, the blockwork naturally looked patchy. If you used an ordinary render, you’d still tend to see where there was new blockwork underneath – that sort of patchiness – but because of the external insulation, we didn’t have that issue.”

The floor was insulated with 200mm of Ballytherm PIR insulation beneath a 75mm screed, while 400mm of Isover Metac insulation was installed in the roof on the flat.

Prior to the move, the family had been staying in a series of rented houses, which tended to be old and damp. They moved into their new home in August, and so far, so good – including some unforeseen benefits.

“The house is really quiet inside, we hear very little outside noise,” says McPhillips. “There were a couple of occasions recently where neighbours were woken up because of a dog barking most of the night, but we hadn’t heard a thing.”

The family has also been feeling the benefits of a ventilation approach that delivers a constant supply of filtered fresh air. “We were aware that having a good ventilation system can really help people with respiratory problems,” says McPhillips. “Having good indoor air quality can minimise the symptoms of asthma, which our eldest daughter suffers from. That was certainly one of the things that I was keenly aware of. And since we’ve moved in, her symptoms are definitely not as bad as before.”

“It’s very comfortable, very warm and is performing as designed. It’s been great, we’re very happy with it.”

SPACE HEATING DEMAND:
Before: Not available (no energy calculations done on original building).

ENERGY PERFORMANCE CERTIFICATE (EPC)
After: B89 & CO2 Rating B90

AIRTIGHTNESS (AT 50 PASCALS)
After: 0.77 air changes per hour

VENTILATION
Before: No ventilation system. Reliant on infiltration, chimney and opening of windows for air changes.