The upgrade of two social housing blocks in Manchester to the Enerphit standard demonstrates how deep energy retrofit can play a part in turning old, run-down estates into vibrant, comfortable, low energy communities.

Recently nominated for a UK Passivhaus Award, the deep energy retrofit of Erneley Close in Longsight, Manchester represents one of the most exciting recent regeneration projects in the UK.

It’s the latest in a long string of upgrades for Eastlands Homes, which was established in 2003 after taking over 3000 properties from Manchester City Council. The group set out on a five year programme to renovate those properties, bringing them up to the Decent Homes standard and beyond. In 2009, Eastlands took over a further 5300 properties, including Erneley Close, and started working to improve these too. 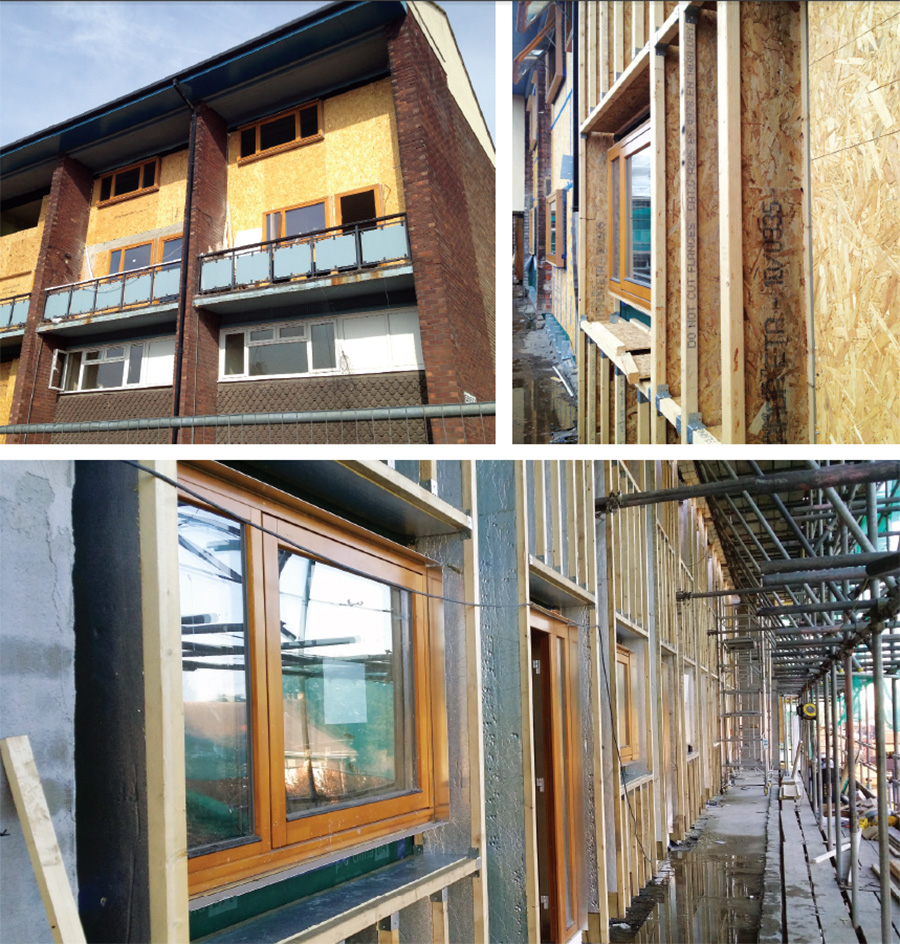 This time Eastlands was keen to push some of the properties further in terms of quality, comfort and energy efficiency. “We had just gone through the financial crash in 2008, and austerity was on its way,” says David Williams, a director at Eastlands. The organisation could see that its tenants might struggle financially, and that fuel poverty was rising.

“We said, what about trying something we could really learn from, and that would actually make a big difference to our customers?” Williams had heard about passive house, but mostly in the context of mainland Europe — and mostly in relation to new build projects.

Eastlands started looking at the profile of its housing stock to see which properties were in most urgent need of regeneration. “I remember arriving at Erneley Close. I remember thinking — these properties don’t look good, from the outside, aesthetically. They just looked down and in a poor state,” he says. 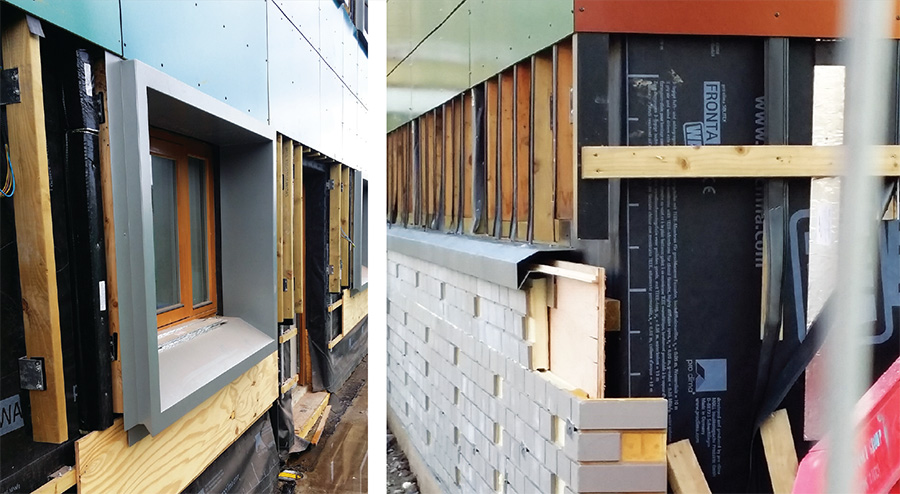 Erneley Close consists of 32 maisonettes — one block of 20 and one block of 12. It was an obvious candidate for regeneration and a deep energy retrofit. The buildings were in poor repair and physically isolated from the surrounding neighbourhoods. Inside, the maisonettes suffered from condensation and black mould, and had rather unpleasant internal bin chutes.

Eastlands began talking to R-Gen Developments, a private development company with experience in both sustainable building and regeneration. Williams says: “That’s where it hatched from really, and then we started looking at it in a bit more detail. And it went from there, we got some designs, and with the backing of our board embarked on the project.”

R-gen are particularly keen to espouse the benefits of the passive house approach (in terms of fuel poverty, carbon, and health benefits) to housing associations, particularly over other green building targets such as the Code for Sustainable Homes. “Because the passive house approach is a fabric first approach,” says Phil Summers, director of R-gen.

At Erneley Close, Summers saw passive house as “a means of engaging with a very tight community and as a means of regenerating a very poor [building] stock and a very poor area.” He adds: “It was about creating a new housing identity.”

R-gen brought on board Manchester-based architectural practice 2e Architects, who have experience in low energy building and had also completed the regeneration of 11 tower blocks. The firm had never done a passive house, but was eager to demonstrate that the standard is a viable option for projects like this. 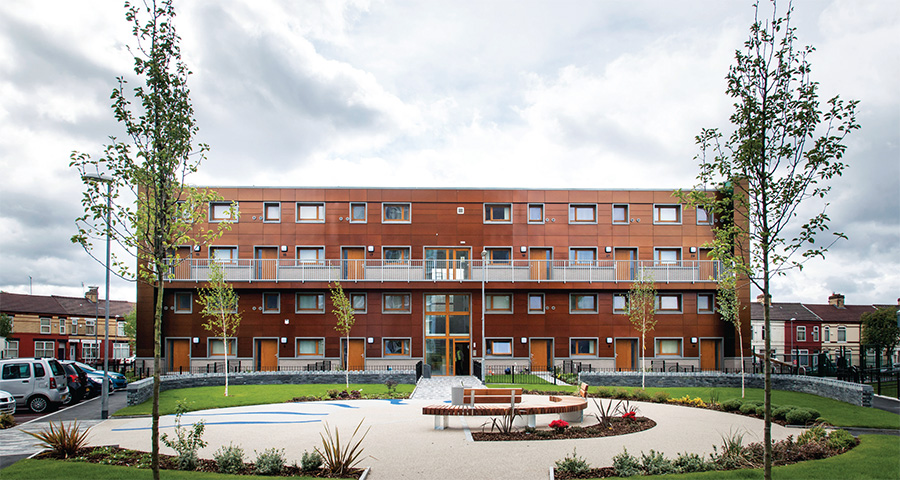 And coming from Germany, architect Kim Ebling was long familiar with the passive house concept. “It was quite nice to hear that England was coming around to this type of thinking,” she says.

The team also hired experienced passive house designer Eric Parks as consultant. Parks previously told Passive House Plus (in issue eight) that Erneley Close was “amazingly cold and uncomfortable” and the maisonettes “managed to be both stuffy and draughty.”

The team looked at the possibility of knocking down and rebuilding, but decided against. This would have meant displacing tenants, which Eastlands didn’t want to do, and they also wouldn’t have been able to rebuild as many units on the site.

They decided to retrofit and aim for the Enerphit standard, but the overall goal was about much more than energy efficiency. “We could also create a nice environment outside,” David Williams says. “Plus we wanted to create a community spirit, and encourage people to change the way they live, for example promoting recycling and a new system of waste removal.” There was extensive community consultation before the project went out for planning permission, to ask tenants what they wanted from the regeneration and to discuss ideas — vital for getting tenants to buy into the project. 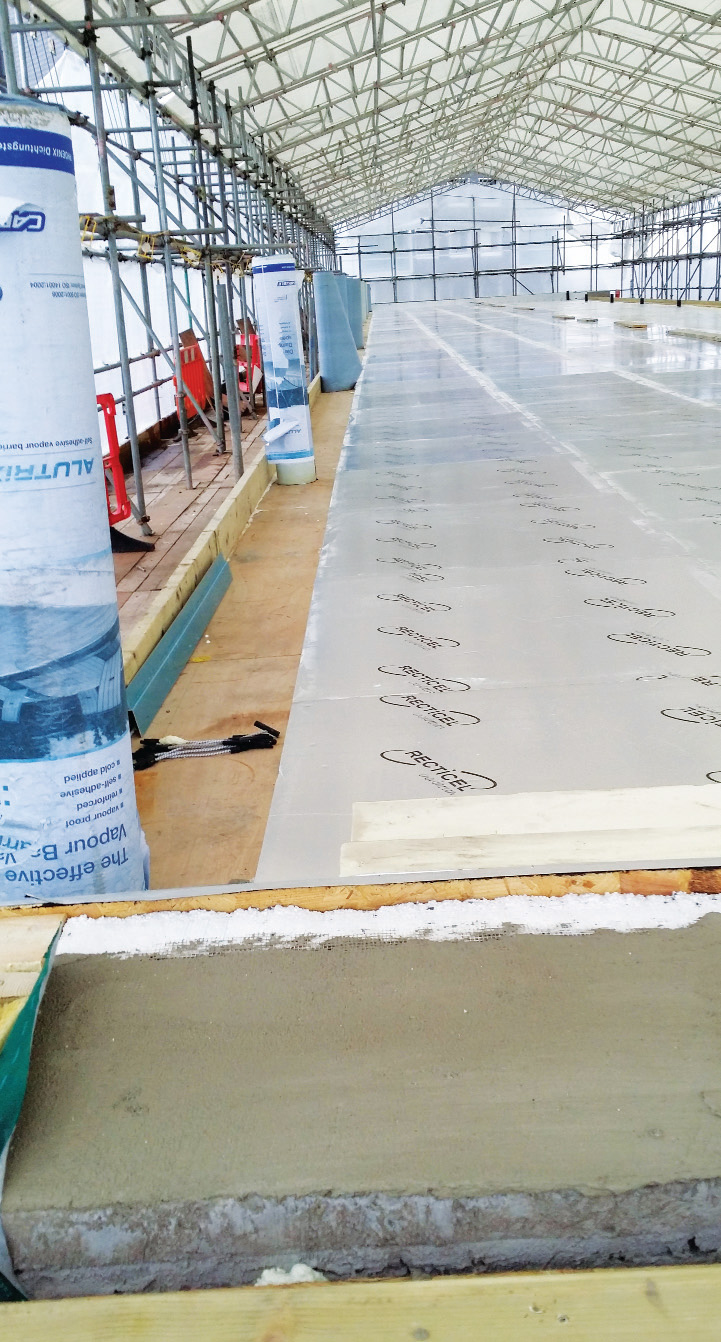 Erneley Close was originally of cavity wall construction. The original plan was to strip off the outer leaf of brickwork and concrete tiles, and then parge and externally insulate the inner leaf. But when contractor Caseys opened up the walls, they found the inner leaf to be a mishmash of blockwork, brick and even some timber. Eastlands was worried about its structurally safety, and made the decision to remove the inner walls entirely. The team had to change tack and completely rejig the design, opting instead to re-build the main elevations with timber panels, pre-fitted with mineral wool insulation and pro clima airtightness tapes. This, along with the decision to completely remove the existing boilers from each flat, meant that the tenants did have to move out temporarily.

The gable walls were deemed safe though, so were given cavity wall insulation and fitted externally with JJI joists that were insulated variously with rigid and semi-rigid insulation. The unheated stairwells were insulated in the same manner. Outside, the architects specified a striking Rockpanel Chameleon rain screen cladding that completely transformed the look of the development. The cladding’s colour changes depending on what angle it is viewed from, and how the sunlight hits it. 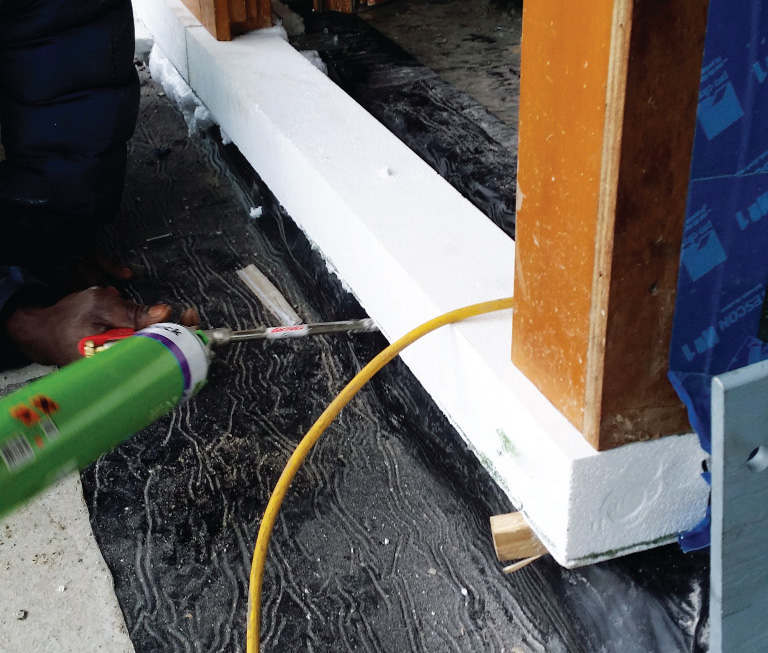 The building’s walkways and vertical fins were externally insulated with fibreglass mats, helping to cut down the almost endless thermal bridging of the original structures. But even with the insulation, these structures are still responsible for about one third of heat loss after the retrofit.

The original roof trusses were removed and new flat roofs — insulated with high performance rigid insulations — laid on top of the existing roof decks. The ground floors were fitted with 30mm vacuum insulated panels — high performance and low in thickness so as not to restrict height under doorways. The double-glazed uPVC windows were removed throughout and replaced with EcoContract triple-glazed timber windows and doors from Green Building Store, who supplied the windows in pre-prepared insulated plywood boxes, to make installation easier and to help reduce thermal bridging around the window junctions.

The individual gas boilers used to service each maisonette were replaced with two high efficiency communal gas boilers in a central service space. These are connected via flowand- return pipes to each unit, providing heating and hot water. Zehnder ComfoAir 160 MVHR units now provide fresh air to each of the maisonettes. These compact MVHR units were installed in bathrooms, and Green Building Store, who supplied the systems, came to the site and explained exactly to the tenants how the systems work. 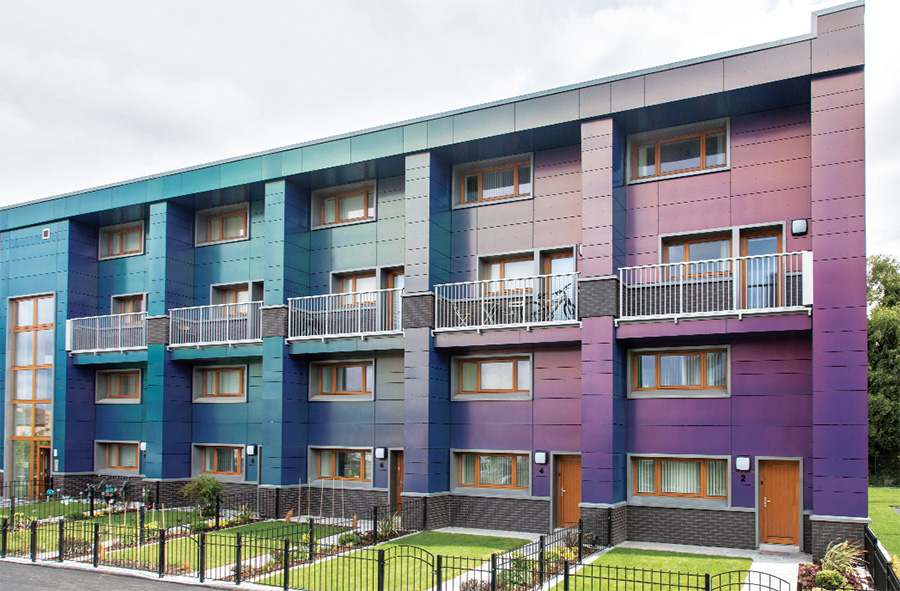 Ultimately, all the hard work paid off — in terms of one measure of quality, airtightness, both blocks came in around 0.8 air changes per hour, well inside the Enerphit standard of 1.0.

Outside of energy efficiency, dealing with waste on site was one of the major goals of the project. Now there are new communal recycling areas outside each block, which mean tenants have to do a bit more work to dispose of their rubbish, but the waste chutes are gone and conditions inside much nicer. There are new secure parking facilities, new landscaping and a new community garden.

It may seem like a trite question, but with the regeneration complete and the tenants moved back in, how does the new differ from the old? “When you look at them now you say wow, what a difference,” David Williams says. “They do look amazing, as well as providing homes that have much reduced energy costs.”

Phil Summers says the tenants have all bought into the refit in a big way. “If you go down to the estate now it’s completely transformed. It’s an estate people are aspiring to live in, whereas before it was one people were aspiring to leave.”

Eastlands is now monitoring energy bills closely to measure the difference the upgrade has made, and paying close attention to feedback from tenants. “I know some of the initial results have been very encouraging,” David Williams says. “Certainly there’s been really positive feedback from the customers on how little they’re having to use their [heating] systems.” He adds that a lot of work has gone into teaching tenants how to ‘use’ the buildings.

Meanwhile R-gen’s Phil Summers says the external works have been fundamental to the regeneration of Erneley Close. “The more you can put in the landscaping to soften the site, the more you can get people involved in the design, the more use you get out of it,” he says. “And I think it’s worked.” 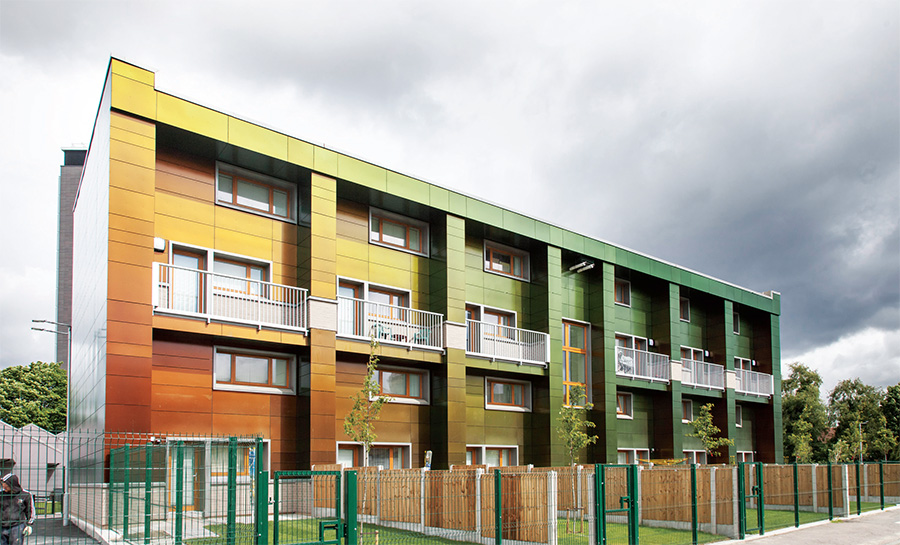 Brick clad wall sections: Gebrik brick slips on ply battened to Solitex breather membrane. Wall build-ups then as per above.