Construct Ireland has picked up two awards at the 2010 Green Awards. Editor Jeff Colley won the green leader award and Construct Ireland picked up the green communications award for successful campaigning work on pay-as-you-save and a proposal to boost the impact of  Building Energy Ratings, which in both cases culminated in policy commitments in the renewed programme for government,  and planned launches later this year. 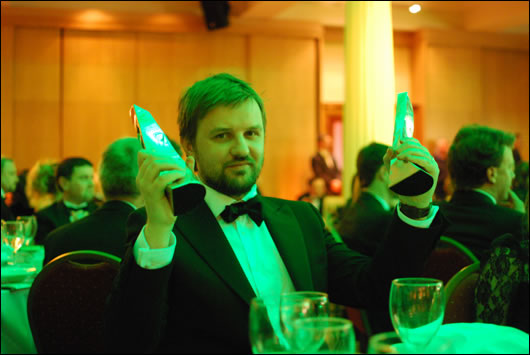 Construct Ireland has picked up two awards at the 2010 Green Awards, which were held last night at the RDS. Editor Jeff Colley won the green leader award and Construct Ireland picked up the green communications award for successful campaigning work on pay-as-you-save and a proposal to boost the impact of  Building Energy Ratings, which in both cases culminated in policy commitments in the renewed programme for government,  and planned launches later this year.

Colley and Construct Ireland developed a campaign for PAYS last August and September through www.payscampaign.ie, with additional media coverage in the Irish Times, Irish Examiner and Sunday Times helping Colley to successfully lobby for the inclusion of PAYS in the renewed programme for government. In August an Amárach/Construct Ireland survey found that 80% of Irish homeowners would be interested in paying for energy upgrades through their utility bills. "These awards are testament to the hard work and commitment of the whole Construct Ireland team," said Colley. "I've been able to spend a lot of time on unpaid campaigning work because of the patience shown by my colleagues, and the continued support of our advertisers and subscribers."


Green awards winners
Construct Ireland is among 20 winners of Ireland’s prestigious 2010 Green Awards which were announced in Dublin on Thursday. The awards recognise excellence and outstanding achievement by organisations and individuals in tackling climate change and addressing environmental issues.

Diageo won the overall green business award for its significant achievement in reducing water consumption by half; for decreasing waste sent to landfill by two thirds by putting in place an advanced waste management and waste prevention programme; and reducing their overall carbon footprint by nearly three quarters. GGBS supplier Ecocem picked up the green product award, rainwater harvesting manufacturer Rainvault won the green innovation award and recycled rubber product producer Crumb Rubber Ireland won the green entrepreneur prize whilst the green building and residential building award were picked up by Solearth and Melted Snow architects respectively. The other winners of the Green Awards include some of the country’s most prominent retailers, financial institutions and manufacturers as well as not-for-profit community groups, schools and green business start-ups in the energy and new technology sectors (see full list of winners below).

Addressing the ceremony last night environment minister John Gormley congratulated the winners, “As you know politicians have a huge role and responsibility in relation to the environment, but individuals, communities and businesses can make a difference too.  What you’re doing tonight is important.  Without environmental activists and those in the business community committed to environmental protection we couldn’t have the sort of momentum on this issue that we have now.

Jerry Dempsey, managing director of commercial services Greenstar commented, “The high standard of entries far exceeded my expectations. There are many valuable and practical lessons to learn from the efforts of these leading companies and individuals. These companies make an important contribution to Ireland’s environment by operating more sustainably with outstanding waste and energy management and developing technology that will encourage others to change their way of living.  In some cases, they have surpassed their own environmental responsibility by reaching out into the community in which they work to make a positive environmental difference. Their efforts are vital for Ireland’s green economy and its contribution towards global sustainability.”

Judging each submission was a panel of experts including eco architect and presenter of RTE 1's About the House and Eco Eye Duncan Stewart, and Louise Dunne, the representative of the Dublin branch of the Urban Forum on Sustainable Development. Tomas Sercovitch from Business in the Community, Amárach Research CEO Gerard O'Neill,  Fás CE superviser with Target Heidi Bedell and Greenstar's marketing director, Michael Sanfey. The awards were sponsored by Greenstar and the Irish Independent.

The Winners for the Green Awards 2010 are:

·         Cliffs of Moher - The Green Entertainment and Leisure Award