Simply Architecture, and their new build residential project ‘The Fairways’ in Cork, has been named the winner of the 2019 Overall ISOVER Award, as well as being named Designer of the Year 2019, at the third ISOVER Awards.

The awards ceremony, which took place at the Smock Alley Theatre on 6th June 2019, saw over 100 construction and building professionals, including architects, engineers, builders and developers, come together to recognise and celebrate the best built and most energy efficient building projects from across Ireland.

According to the ISOVER Awards 2019 judging panel, the entry from Simply Architecture demonstrates the perfect way of doing things in terms of sustainability and design, and showcases a stunning residential property that achieves the passive house standard. The design responds ingeniously to an extremely challenging suburban site to prove that world class energy performance can be achieved with show-stopping aesthetics, utilising low embodied energy materials.

The property is a one off residential house in Douglas, Co Cork. The project team found a steeply sloping site, previously a builder’s yard, traversed by three wayleaves (rights of way). It looked implausible; three wayleaves ensured only a small wedge in the corner of the site could be developed and the steep slope made access difficult. The planning authority placed restrictions on the ridge height and south facing windows to prevent overlooking. The house design is therefore a response to a variety of obstacles. 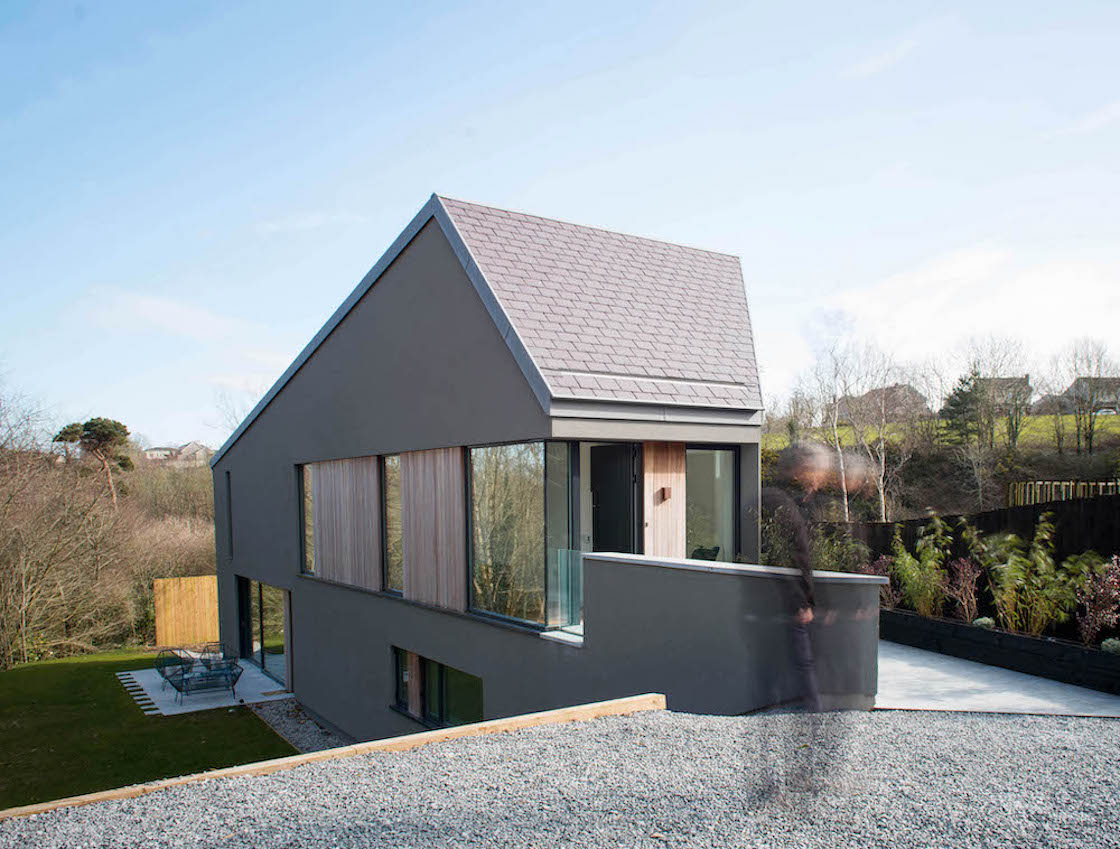 Given the unusual shape and the steep slope, aesthetics, orientation and access all became issues that needed to be carefully considered. Additionally the house achieved full passive house certification. The compact building form ensured the slope could be negotiated quite efficiently while south facing, high level windows provide sufficient solar gain while avoiding any overlooking issues.

The announcement of the 2019 ISOVER award winners comes as the urgency for addressing climate and environmental change reaches unprecedented levels. Speaking on the impact outstanding energy efficient design and build in construction can have on reversing climate change, managing director of ISOVER in Ireland, Brian Dolan said:

The ISOVER Awards highlight the importance of improving the energy performance of Irish buildings and, consequently, the quality of life for users and residents of the buildings. The ISOVER Awards, which were previously known as the Energy Efficiency Awards, celebrate the Irish construction industry professionals that place the green building agenda at the heart of their projects and champion energy efficiency in their work.

The awards were open to all construction and building professionals, including architects, engineers, builders and developers. Winners were chosen by an elite panel of industry experts including Pat Barry, CEO of the Irish Green Building Council, Jeff Colley, editor of Passive House Plus Magazine, and Patrick Bradley, architect and former judge on ‘Home of the Year’. The panel of experts looked for excellence in both the design of the build from a specifications point of view, but also with regards to how the building was constructed on-site, to ensure maximum energy efficiency for future occupants.

Commenting on the calibre of the winners at the ISOVER Awards, Jeff Colley, Editor of Passive House Plus Magazine said “The ISOVER awards 2019 recognise and reward the best built and most energy efficient building projects from across the island of Ireland, and signal to the rest of the construction industry what excellence in energy efficient design and build looks like as we enter a new era of environmental consciousness. The entries included numerous examples showing exactly the kind of excellence that needs to become the norm as we face up to the climate crisis: real leadership and advocacy for energy efficient thinking through their outstanding building and design. Congratulations to all the ISOVER award winners 2019.”

Patrick Bradley, one of the ISOVER Awards 2019 judges and former judge on ‘Home of the Year’ commented: “The ISOVER Awards is a wonderful initiative which demonstrates the importance of prioritising energy efficiency in the construction industry. My fellow judges and I had very difficult decisions to make when selecting the winners of this year’s ISOVER Awards and we were incredibly impressed with the calibre of entries. I would like to take this opportunity to congratulate all the winning projects.”

Pictured above are all the winners from the 2019 ISOVER awards. From L to R: Declan McElhinney from Ceiling and Allied Ltd; James Walsh from Low Energy Design; Gareth Sullivan from Simply Architecture; Brian Dolan, managing director of Saint-Gobain and ISOVER Ireland; Paul McNally from The Passivhaus Architecture Company; Mick Cosgrave from Cosgrave Developments; and Niall Small from HJ Lyons

Contractor and Designer of the year:

Two of the winnings projects — The Fairways by Simply Archiecture and St Joseph’s Woolen Mills by The Passivhaus Architecture Company — will feature in the next issue of Passive House Plus, which is due out in August. One of the winners, St Bricin’s Park in Dublin, is featured in the current issue. To find out more information about the ISOVER Awards 2019, visit www.isover.ie or @ISOVERIreland on Twitter.