The commercial secrecy surrounding the fire-testing of construction materials undermines fire protection by potentially obscuring serious concerns, a major alliance of fire bodies has told the public enquiry into the Grenfell disaster.

In its recommendations for the terms of reference of the Grenfell Enquiry, the Fire Sector Federation, a broad alliance of fire and rescue organisations, fire protection companies, building control bodies and product manufacturers, said: “the outcomes of product testing building materials is commercially sensitive... and as a consequence is never available in a raw state publicly” thus "weakening the UK’s ability to identify serious concerns and undermining national protection."

This echoed comments by the chair of the Local Government Association, Lord Porter, in July: “If the public are going to have faith in this fire safety testing process then everything needs to be out in the open. It is no time for contractors or manufacturers to withhold test results from both councils and the public.”

This call for disclosure of all past results has been endorsed by the NHBC, one of the country’s biggest building control and certification bodies. While recognising that the cost of testing is borne solely by the company or organisation that procures it, the NHBC told Passive House Plus: “We believe the situation we are in is unique, and a list of all tests that have been carried out and a summary of their results, successful or otherwise, would be highly valuable to the industry. “

This magazine has so far been unable to obtain information about whether cladding systems failed large scale fire tests prior to the testing commissioned by the Department of Communities & Local Government (DCLG) this summer following the Grenfell disaster (see boxout).

It would appear that, at present, there is no clear mechanism for any fire expert undertaking a ‘desktop assessment’ of a cladding system’s fire safety to check if the assembly previously failed a large-scale fire test. This leaves open the question of whether it is possible that cladding assemblies that failed a BS 8414 large-scale physical test prior to June 2017 subsequently ‘passed ’desktop assessments. BS8414 is the British standard for testing the fire safety of external cladding systems.

So called ‘desktop assessments’ (or option three assessments) — in which the safety of an assembly was assessed by experts based on existing data rather than a physical test —were endorsed by the Building Control Alliance, the NHBC and a number of manufacturers as an alternative to the BS 8414 large-scale fire test, on the grounds that there were too many possible cladding component combinations for all to receive physical testing.

And if no large-scale tests were undertaken prior to this summer on assemblies that subsequently failed the DCLG’s post-Grenfell testing, questions remain about why these systems may have been selected for desktop assessment rather than physical testing.

In August DCLG asked the BRE to publish the results of previous large scale fire tests on insulation and cladding “to help inform building owners’ decisions about whether remedial work is required, and if so what materials could be used as replacements”. Some test results have now been published on the BRE website.

However, all the results published at the time of going to press (30 in total) were of assemblies that had passed the test. All the rain screen assemblies included appear to have either a mineral-based insulation (stone wool), or, where the insulation was a PIR or phenolic foam, a mineral-based cladding (ceramic, mineral, fibre cement or ‘mineral composite’) system. None included the combination of aluminium composite material and foam insulation used at Grenfell.

Passive House Plus has seen a small number of other BS 8414 tests with pass results, but again these all contained one ‘solid metal, mineral- or cement-based’ element. However, some ‘pass’ desktop assessments seen by this magazine or other news organisations (such as the BBC) included foam insulation with ACM FR (aluminium composite material with a modified fire-retardant polyethylene filler) rain-screen panels, a combination which recently failed a BS 8414 fire test at BRE. 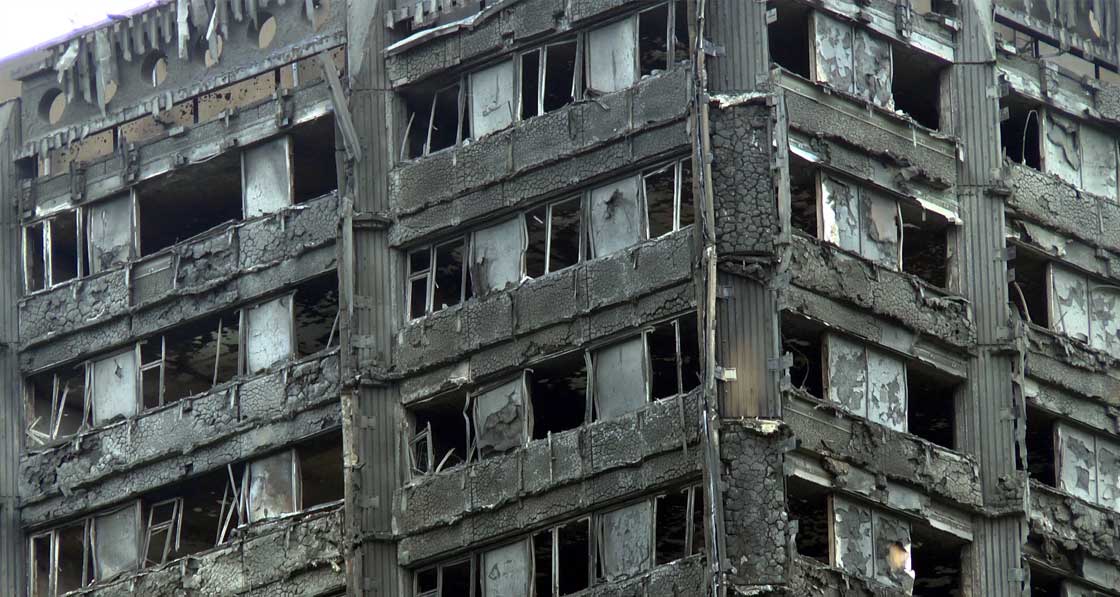 Sky News reported in mid-September that, “BRE has not responded to a series of questions including how many cladding systems failed the test and whether more than one fire test was carried out on any of the approved cladding systems in order for them to pass.” Passive House Plus also has yet to receive a response from BRE to similar questions.

Exova, one of the main contractors offering desktop assessments, has told Passive House Plus that they are still carrying them out. “Clients are still requesting DTAs and we continue to carry these out in accordance with industry guidelines,” a spokesperson said. “They are based on the data available at the time and issued on the understanding that they are subject to review if further data becomes available.”

The UK government also appears to endorse desktop assessments, warning only that building owners using them to establish what type of assembly would be safe on high-rise buildings currently clad with ACM should ensure such assessments are “checked rigorously”.

However the NHBC, which last year published guidance containing some “pre-approved” construction assemblies informed by a combination of fire tests and desktop assessments (including the combination of PIR and phenolic insulation with ACM rainscreen with a “Class B” fire rating) , has now withdrawn the guidance, and will no longer accept such assessments as proof of compliance.

NHBC say that “in view of the latest knowledge provided by the Government tests, for ACM cladding in combination with certain types of insulation,” they will only now accept as demonstrating compliance: the use of materials of limited combustibility for all elements of the cladding systems on buildings over 18m, or wall constructions that have been tested.

However, experts including the Fire Brigades Union (FBU) and the Fire Protection Association have also questioned reliance on the BS 8414 fire test for tall buildings, although this is currently an accepted route to compliance set out in Approved Document B of the building regulations.

The Fire Protection Association (FPA) reportedly has concerns about the applicability of the standard BS8414 test to real life situations, and is intending to carrying out modified large-scale tests that they believe will more closely resemble conditions in a real building. According to a report in Inside Housing, the FPA will add windows and other fixings to the test walls.

“The FPA believes this is necessary because holes needed for screws and nails can cause fire safety issues, and the materials used to make windows can assist a fire to spread or enter the inside of a building,” the report says.

According to Dave Sibert, National Fire Safety Advisor of the FBU, immediately after the Grenfell Tower fire the union suggested that there should be an emergency addendum issued to Approved Document B, that would put a freeze on the use of any combustible materials on high rise buildings without sprinklers – regardless of whether the assembly had been passed by a BS8414 of test or a desktop study. They wanted this freeze to stay in place at least until all the investigations into Grenfell were complete – though “the FBU hope it would not be lifted”.

As Dave Sibert pointed out to Passive House Plus: “Scottish technical standards already demand that only non-combustible materials should be incorporated into a cladding system for a high rise building. It is disappointing that no such action has been recommended by the government’s ‘expert panel’.”

Sibert was dismayed to learn that desktop assessments were still being sought: ”It is even more disappointing to learn that the most dubious route to compliance with the building regulations is still being followed by some in the supply chain.”

He concluded: “If no action is taken, the status quo will remain until Dame Judith Hackitt recommends a review of Approved Document B, and that review is completed, at least 12 months from today, if not much longer.”

Meanwhile the public enquiry being led by retired judge Sir Martin Moore-Bick opened in September. The chairman has the power to compel the production of documents and to summon witnesses to give evidence on oath.

The Metropolitan Police are also investigating the role of over 300 companies or organisations, and “keeping an open mind” on the possibilities of pursuing both corporate and individual manslaughter charges, as well as charges relating to fraud, misconduct, health and safety breaches, and breaches of fire safety regulations.

The police have so far identified 2,400 witnesses to talk to, and are undertaking “a forensic examination of the tower which includes photographing and documenting every room on every floor, paying particular attention to fire safety provisions such as fire doors, the standards of construction work, the routing of pipework and smoke extraction systems”.

Following the Grenfell Tower fire and the widespread concerns that the cladding system – and, in particular, the aluminium composite (ACM) panels containing unmodified polyethylene cores — had played a major part in the severity of the blaze, the Department of Communities & Local Government commissioned BRE to carry out a series of large-scale fire tests on a range of cladding system combinations.

The tests demonstrated that a combination of PIR insulation and unmodified-core ACM cladding , similar to that found on the larger part of Grenfell tower, failed the test, and failed it unequivocally, within just 7 minutes of the 30-minute test.

Several other cladding combinations were tested, with results as set out below:

The DCLG’s conclusions were as follows: