Ryan, a technician from Wicklow who worked for over ten years for MosArt and the Passive House Academy, is now in the fourth year of managing his own practice and has major plans to expand and develop his young company.

Ryan told Passive House Plus that he also has plans to develop online courses in DesignPH 2, how to file a passive house project for certification, and complying with thermal bridging requirements in Part L.

He said that Earth Cycle also intends to provide video content on overlooked topics such as overheating, area-tovolume ratio (form factor), ducting accommodation and centralised design principles, and the affect all of these will have on the cost of a project.

“Lastly, we are generating prototype designs for passive houses which can be obtained for any orientation and site,” he said.

Ryan started in construction management, working on a number of small-scale residential projects before returning to education to become a technician.

He went on to work with Tomas O’Leary at MosArt and the Passive House Academy, obtaining a Level 9 CPD diploma in thermal modelling and passive house consultant qualifications. After leaving MosArt in 2015, he applied to the Passive House Institute to become a certifier.

Since then he has certified over 20 passive house projects, with many more in progress. 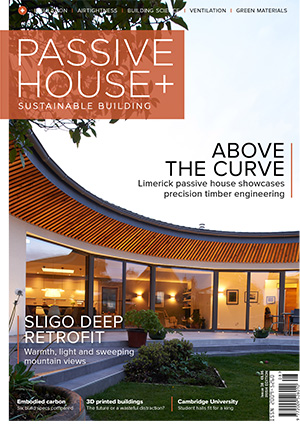